It's Everyone Else's Fault ... 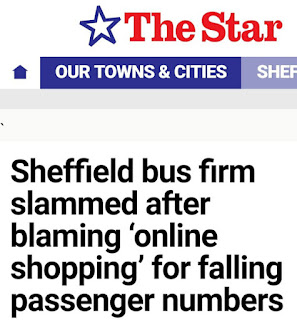 Really? fbb has been told on a number of occasions that the footfall in Sheffield's City centre had declined "dramatically" and it is all the fault of the internet.


1. Punitive increases in fares to "encourage" passengers to by a day ticket (which has also increased in price).


3. Apart from the day ticket (etc) there has been no route-by-route promotion of new services for many years. What limited advertorial stuff (i.e. other than a plain timetable) has been weak.

5. Unreliability, mostly due to road works and high levels of traffic, but a good heap of the problem deriving from poor on-street regulation of the service. 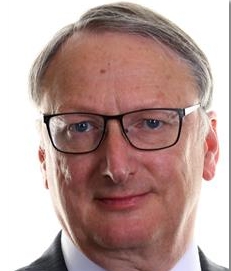 ... to challenge the "blame everything on the internet" excuse. 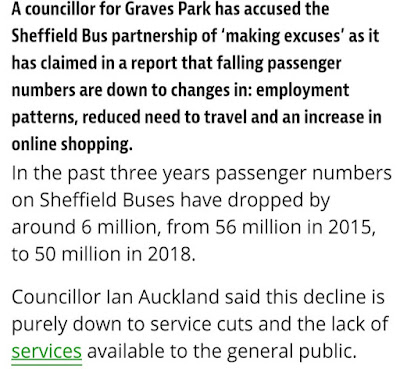 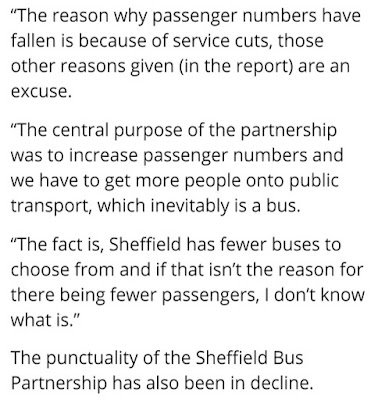 But well done Mr Aukland for challenging the excuse and pointing out that the Bus Partnership, Buses for Sheffield, Travel South Yorkshire etc. etc. are no alternative to good, well publicised services.

So come on First. Offer a maximum single ticket of £2 and a £3 day ticket on (say) services 75 and 76; increase the frequency to a combined every 5 minutes (from every 6) and have some "inspectors" to regulate the service with a hot spare available to help cover any breakdown in service. Oh, yes. Paint the front ends bright red.

There will be abstraction from parallel services but you might see an overall growth of numbers on that corridor.

Instead of whingeing about the internet (which you cannot change) try making a difference with things that you can improve.

Another Re-organisation Delivers?
Transport for West Midlands (TfWM) is the public body responsible for co-ordinating transport services in the West Midlands metropolitan county in England. It is an executive body of the West Midlands Combined Authority (WMCA), with bus franchising and highway management powers similar to Transport for London. TfWM's policies and strategy are set by the Transport Delivery Committee of the WMCA.

TfWM's initial priorities are the expansion of the Metro through East Birmingham, Brierley Hill and Birmingham Airport, improvements to the M5 and M6 motorways, and new cycle routes as part of a metropolitan cycle network. There are also plans to work with central government over the future of the underused M6 Toll.

And they have announced, of course, a new unified brand with all buses being red ... 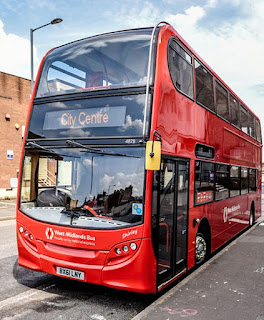 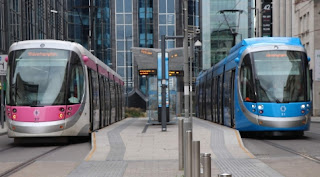 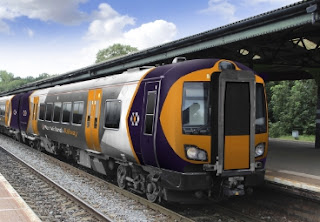 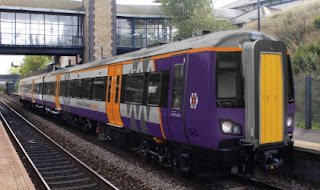 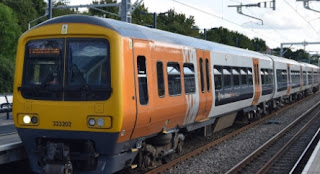 The first results of this TfWM re-think have been missed by fbb, so here is a bit of old-ish  news. 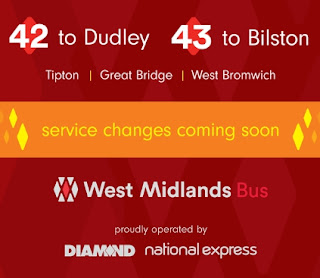 These services are now joint between Diamond and National Express ... 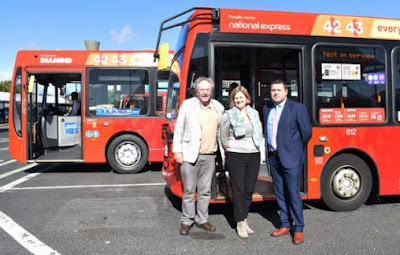 Buses of both operators are in the new standard red livery with operator logo above the doors and "West Midlands Bus" and logo on the bodysides. Also:- 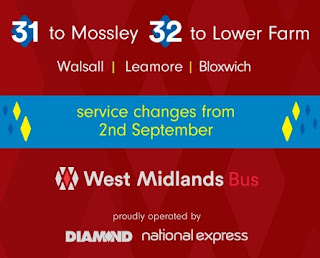 For the most part, buses on this route will bear the new West Midlands Bus branding, with customers able to distinguish the operators by the company logos which will be visible just above the doors.

The launch of the new joint timetable marks the end of the Walsall service numbers 301 & 302, as these will be known as the 31 & 32 for both operators from this date.

On close inspection, the new livery, which appears to be a simple red all over ... 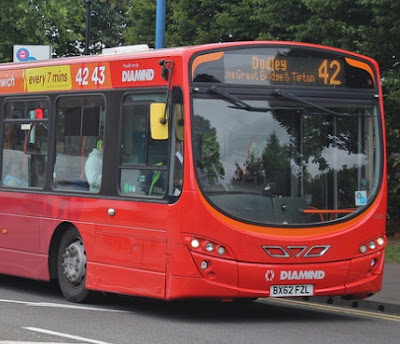 ... actually has a lighter red (vermilion?) splodge on the front which merges into the darker red via a bit of TfWM logo "netting".

More importantly there is reasonable ticket interavailability on routes where the two operators used to compete.

The best value on bus ticket available to buy is the Diamond Value Day ticket £2.80 (£1.50 child) which you can purchase on both Diamond and National Express and is valid on ANY 42/43/43A service.

Diamond is now also accepting and selling National Express daysavers and travelcards. National Express are also selling Diamond Value Day & Week tickets which are valid on all 42/43/43A services and other diamond value routes.

This comes at a time when the two Buses for Sheffield operators have stopped accepting joint tickets on their join routes.

That Leyland National
Thanks to a correspondent who put fbb (and possibly the man in the Peco Shop) right by telling him that the model he has just bought is originally from the Tower Models range.

This could explain why fbb could not find it in the former Parkside Models range! 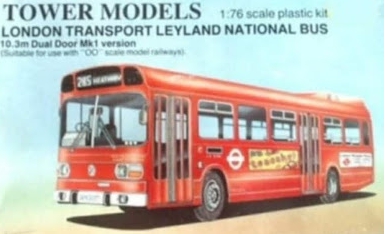 ... and the green version as well. 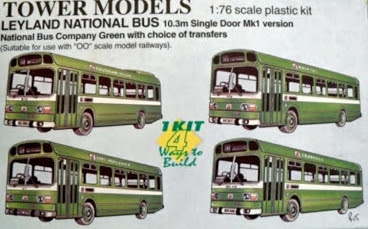 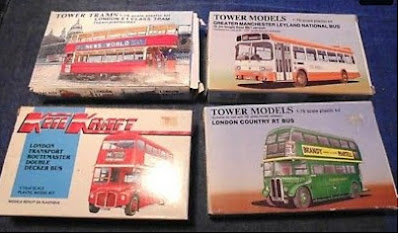 ... shows the Manchester version to be released later by Peco plus an RT and a London Tram. The RT was also available in  red. 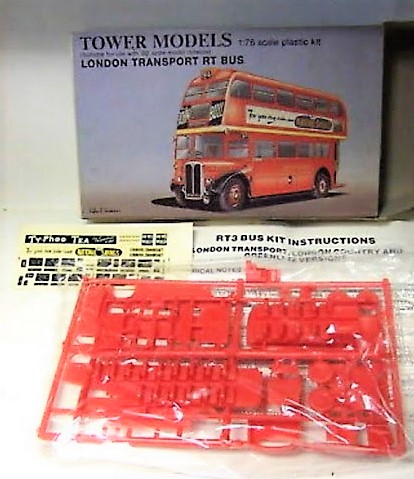 fbb knows nothing about the Routemaster (Keil Kraft). This is also a plastic kit but advertised as 1:72 scale, slightly larger than exact OO and the size used for model aircraft. Maybe, as our correspondent deduces, these were all moulded by the same company?

Delay Repay Repercussions
fbb and Mrs fbb, you will remember, travelled to Glasgow to join their Scottish rail-holiday-by-coach. The outward trip was significantly delayed by a lack of electric string at Carstairs and their return journey by a lack of signals between Waterloo and Clapham Junction.

The return fare for the two old crocks was :- 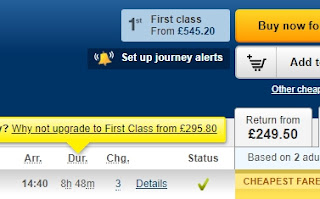 Virgin West Coast replied with a cheque for the whole of the outward leg in three days - i.e. £124.75.

They sent the full return fare of £249.50!!! (this is subject to confirmation upon receipt of the next bank statement, but this is what they said they had sent.)

Neither company asked the fbbs to specify their fare, merely to send a scan of their tickets.

This means the luckless holiday travellers have made a 50% profit on their return travel.

Wherein lies a moral dilemma. Should the honest pair of perplexed pensioners attempt to return the over-payment - and if so how?
-o-o-o-o-o-o-o-o-o-
Tomorrow we go to Thorpe Park

Next Leeds blog : Monday 22nd October
Posted by fatbusbloke at 02:00