Change Of Tune Crossing the Lune (3)

Correspondent Jim, who resides in Lancaster, kindly responded to fbb's appeal for information about the first day of the New Network by sending his observations and a batch of fascinating fotos!

Jim is chairman of the Lancaster Bus Users Group (LBUG) so he does know what he is talking (e-mailing?) about

The text in BLUE is from Jim's e-mail; the "default" text in black is from fbb!

You asked for some observations on how things went today.

Well, Greyhound Bridge did re-open and Skerton Bridge reverted to one-way (eastbound) working. But despite the county council promising that Greyhound Bridge would be "fully open" on Sunday ...

... afternoon only one of the three lanes is fully open. There appears to be a problem with the nearside lane (which should now be a bus lane) above one of the supporting piers with excavations in place. In any case the lane markings and "Bus Lane" signage have yet to be completed. 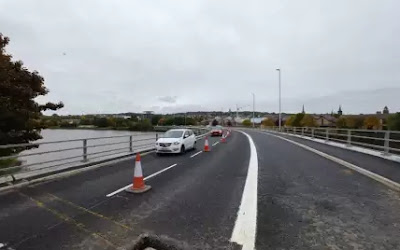 Well, it will be super smashing when it's finished.

The new ticket machines Stagecoach has recently introduced to facilitate contactless payment seemed to cause some drivers a problem and loading as very slow.  In the afternoon peak it was taking between 6 and 9 minutes to load a double-decker at the university, despite hardly anyone paying cash!

LCC had done a good job on updating the departure lists at stops (they control all roadside publicity) ... 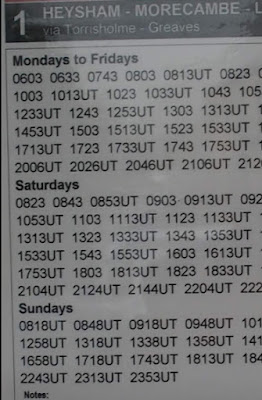 Perhaps the confuser isn't clever enough to do that? But a good old-fashioned sticky label might help!

... but have fallen down at Morecambe Bus Station, however, by failing to update the service numbers on the flags, which caused some confusion to drivers and passengers.  Service 2 buses (the successor to service 3) were leaving from either stand depending on the driver.

A new system map was on display at the University (together with a poster commissioned by our group, educating students in the etiquette of bus travel! ... 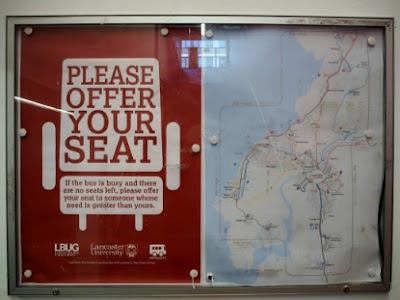 ... However, the map of bus routes around the campus was the old version. 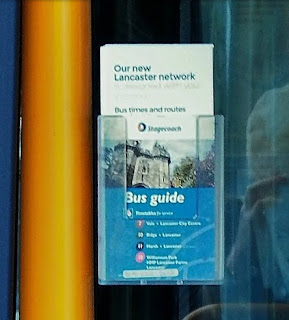 Anne at the Bus Station Travel Office was too busy selling tickets ... 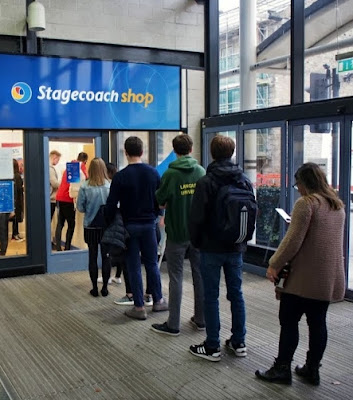 ... to be able to refill the racks there and there were no new timetables in the library only old "closure" orange ones. 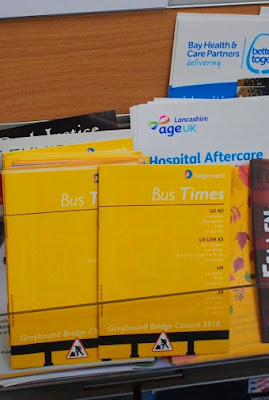 The Visitor Info Centres at Morecambe and Lancaster however were excellent, largely due to LBUG Paul who is employed as a member of the VIC team with specific public transport information responsibilities. 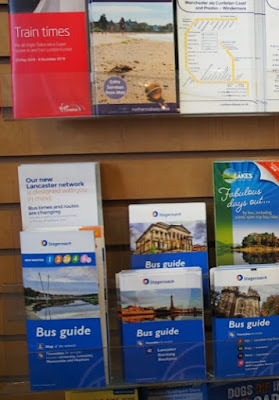 Shouldn't the bus companies be doing this? Why should Paul be publicising their services for them, and paid for out of the public purse? Ah yes! Paul will do a much better job that any of the bus companies.

Stagecoach had staff on duty in the bus station, at the main city centre loading point ... 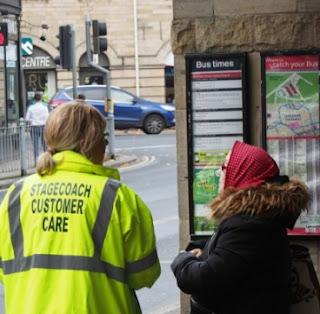 ... and the university and they were pro-active in approaching passengers and giving them information.  But it was almost impossible to make an enquiry at the Travel Shop. The queue of students wishing to purchase "unirider" tickets was out of the door and across the concourse all day (despite tickets being available online).

Shock horror! Students NOT purchasing on-line - preferring to buy from a real person? What a surprise!

Shouldn't Stagecoach have had a Uni-ticket sales desk at the Uni? Oh, of course; by not having one they could snaffle an extra single fare from Uni into Lancaster!

At least Stagecoach had a second member of staff handing out application forms to people in the queue so that they could complete them before they got to the counter.

Stagecoach are making every effort to get students to use the 1, including getting the 2 to show "Alexandra Park" on the front rather than University!, but of course people tend to get on whichever bus comes along first and I believe there were some very full buses on the 2 and passengers left behind in Bowerham this morning.

At various times, there was "bunching" ... 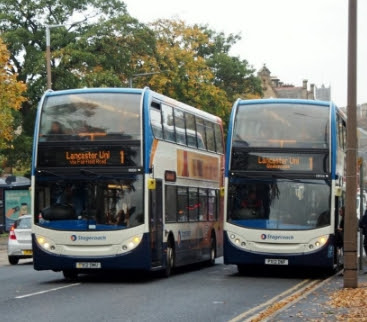 ... which might imply twenty minute gaps in the "frequent" service. No wonder they got on the first bus that comes.

Pesky students, not doing as they are told and using the wrong bus rather than waiting. Shameful!

In case anyone doubts the value of the University traffic to the network I've attached a few shots taken in the evening peak at the University underpass. 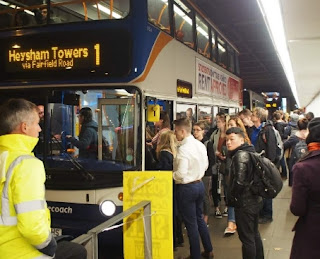 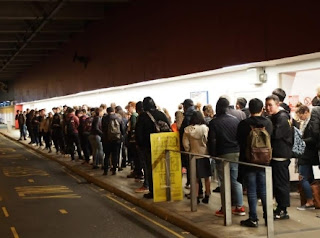 and down the approach stairs 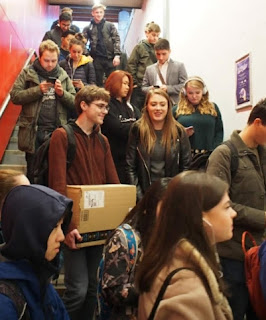 There were people constantly arriving at the stops during the hour and a half I was there and the buses were just about coping (although woe betide anyone waiting en-route for a bus to town!)

There is a tunnel under the main Uni building complex ... 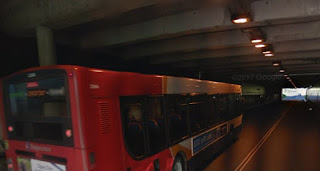 ... where all buses (in both direction) stop. As well as the stairs there is a lift and the obligatory electronic display. 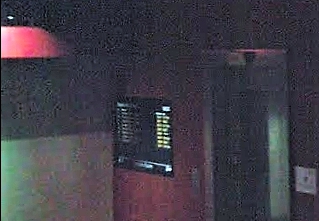 It is gloomy - but not quite as funereal as these Streetview pictures might suggest.

But, by way of conclusion, Jim seems to think that the new network has been both well publicised, well thought out and, barring a few minor glitches, implemented efficiently by Stagecoach.

Or Has It? - Stagecoach Gets The Sums Wrong?
Yesterday, Jim was out "monitoring" the new services. He stationed himself on the A6 ... 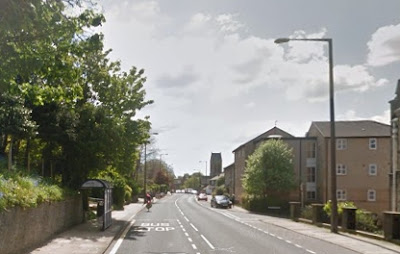 ... watching the buses on the new service 1 zoom past taking lots of eager students to the Varsity. He writes:- 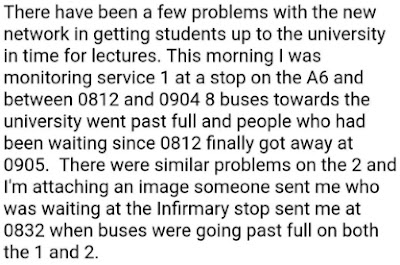 Nearly an hour's wait and missing an 0900 lecture? Not very good!

Even in fbb's student days everyone hated 0900 lectures! 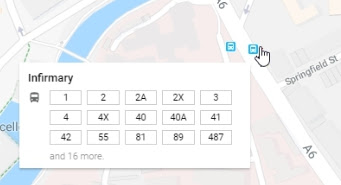 Here is the Infirmary stop, much nearer the city centre, from where most buses go, via their various routes, to the Uni campus (but note that Google Maps has yet to discover the new network.). 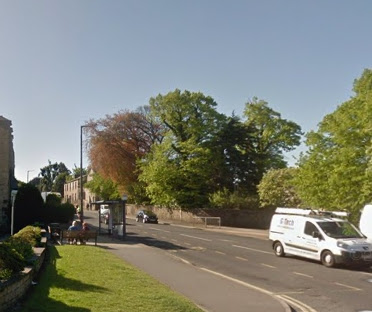 And here is the queue at 0832 yesterday as full buses whizzed past without stopping. 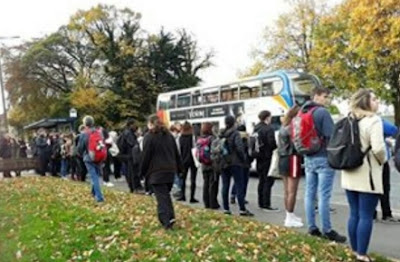 Why so many customers there? Nearby are a number of blocks of student flats.

Who would be a student, eh?

Tomorrow we go back to Heysham inter alia.


Next Lune-y blog : Thursday 11th October
Posted by fatbusbloke at 02:00