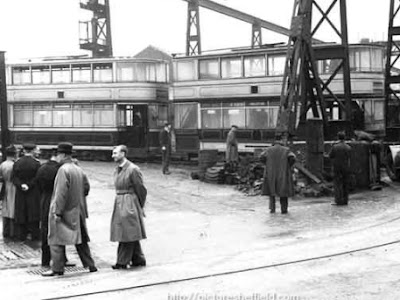 ... followed soon afterwards by the remainder of the trolleybus networks. 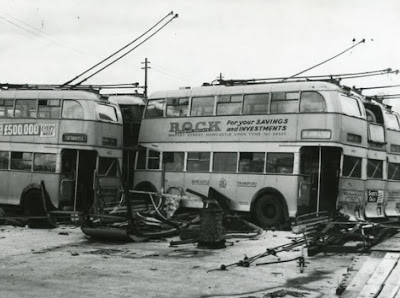 But, while teacher-to-be fbb was enjoying the Brussels tram network, came the announcement there that trams were to be removed from city centre streets ... 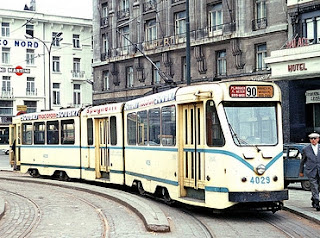 ... boo! The main central corridors would be put in tunnel and were designated "pre-metro". Metro lines evolved ... 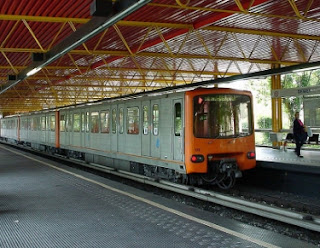 ... and suburban tram routes were upgraded, largely by diving under busy road junctions. 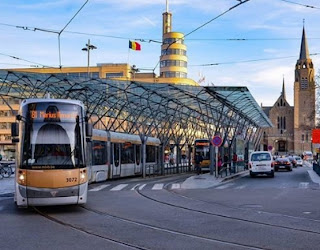 Many subsidiary lines were closed, but the network evolved into a busy modern speedy system.

In Stuttgart, the authorities followed a similar scheme but with one extra ingredient. Firstly all trams were to run in tunnels through most of the city centre. Secondly the underground stations would be of a "pre-metro" design with pavement level stops for the trams and higher platforms for the future "metro". 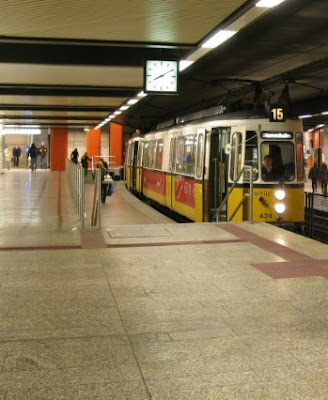 But the mega-change would be from metre gauge to standard gauge (4'8½")! Just consider what this would mean. It would be necessary to relay many lines with dual gauge track as both systems would run in parallel until the whole conversion was complete. 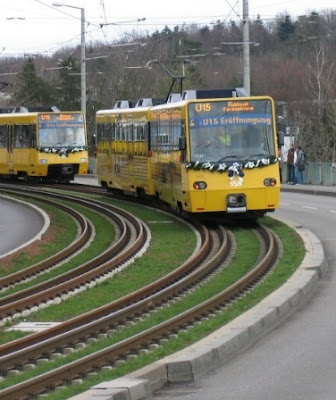 And this was exactly what happened. 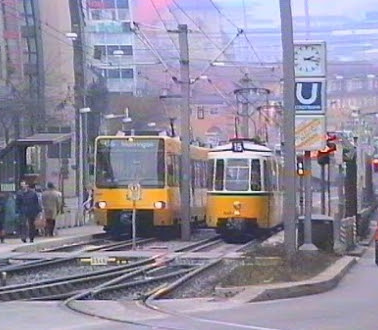 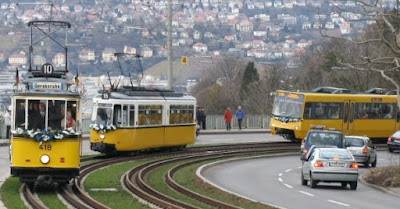 It wasn't quite as simple as that. The Southern section was replaced like for like by the new vehicles, but the northern sections suffered the delights of a replacement bus service ... 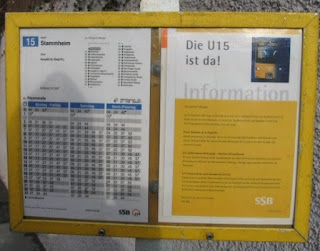 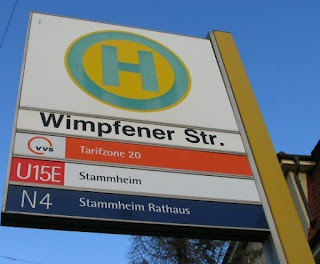 ... while a new tunnelled section was opened under the Unterlanderstrasse at Zuffenhausen. 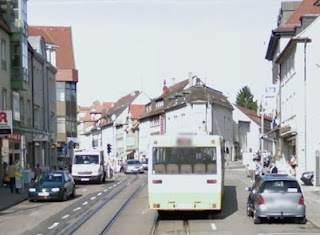 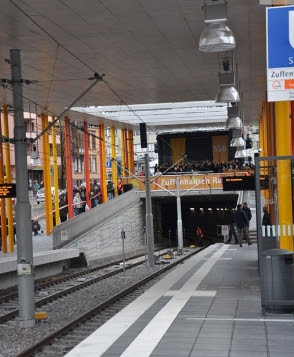 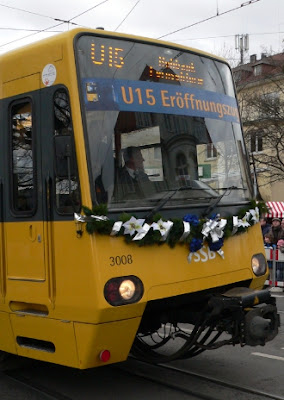 Even with genuine street running, it was usual to build raised platforms to fit the new units ... 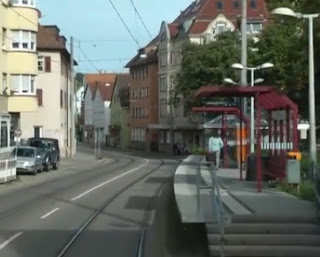 ... although in a few locations it was still necessary to deploy the pneumatic steps to allow boarding in the middle of the highway! 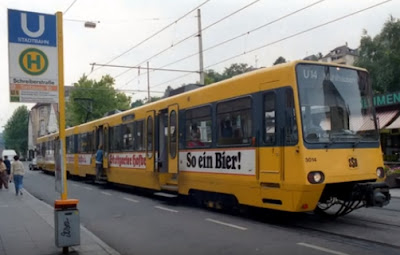 Odd to see a "U" labelled vehicle loading from road level, but such is the ingenuity of the change from tram to Stadtbahn, that Stuttgart resident took it all in their stride. The maps below show where the tunnelled sections are (darker colours) - split into two to fit the blog page. 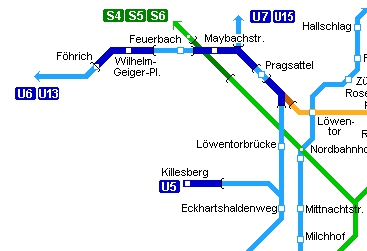 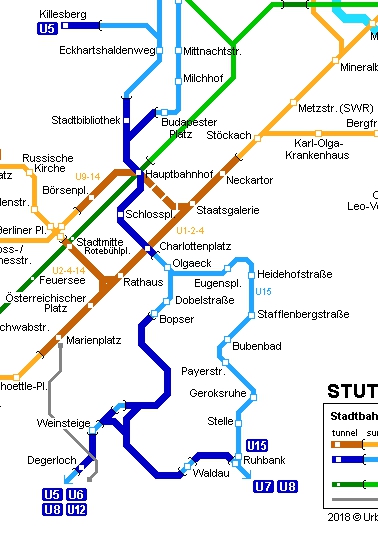 All very impressive and, needless to say, a whole raft of extensions and improvements are under consideration or at the building or planning stage. One pressing need is to increase capacity on some of the original;y converted lines, hence, fbb has been informed, the introduction of the controversial Monday to Friday X1 bus (see earlier blog).

The X1 will provide extra capacity until a rebuild can be set in motion to accommodate longer units.

Currently lines are served by one or two "two-car" units as shown diagrammatically on the electronic signs. 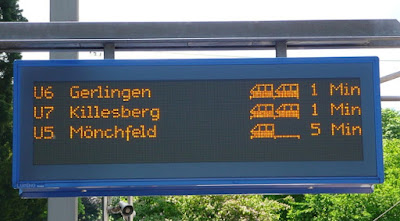 The vast majority of u routes run every ten minutes which gives some very frequent headways where several routes come together. 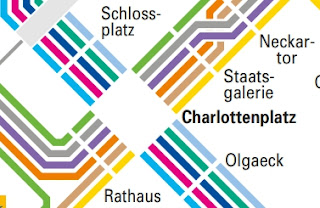 But, in general, all routes run almost completely on reserved track and in tunnel but with many "at grade" intersections with real traffic, as here at Bad Cammstatt then ... 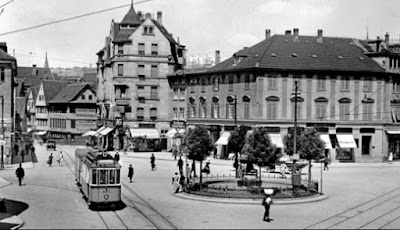 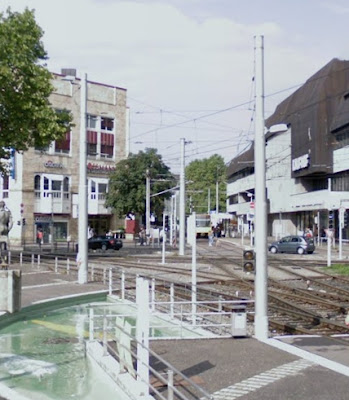 And one extra delight. Although the network conversion is now complete, some sections of dual gauge track have been retained allowing SBB to run some heritage tram services on certain weekend days. Apparently the trips are very popular.

Tomorrow - a couple of non-standard bits of operation.

Next Stuttgart blog : Thursday 1st November
Posted by fatbusbloke at 02:00