Rail Discoveries is a sister company to Great Rail Journeys, offering a range of UK and European rail-based holidays but somewhat less "up-market". Sunday 23rd was technically "Day 1" in the rather over-sold itinerary-speak of tour operators. We met our tour guide (the affable Les) at the hotel and that was it!

Not even an evening meal!

But the fbbs knew that when they booked.

... was that the first train trip would be by coach! This change was announced by letter a few days before departure but without explanation.

This was disappointing in one way, but meant that the longed-for trip on the West Highland line would be that last event of the tour - and therefore best bit! fbb had yearned for such an excursion since his youth but expense and distance always got in the way. So the fbbs gave each other a 70th Birthday present of this glorious rail ride.

Then came the sad death of No 2 son which rather deflated the idea - and so it didn't happen.

The night was spent comfortably at the Holiday Inn Express, a "battery chicken" type hotel, but close enough to the centre of the City to make things straightforward. 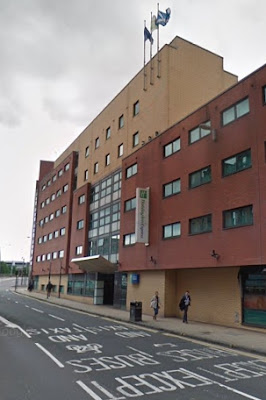 It stands opposite two buildings of note. The Briggait, Glasgow's former fish market is now "done up" as a base for artists and crafty types ... 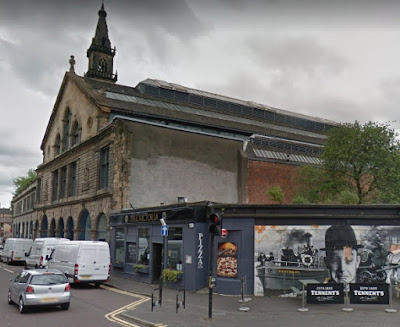 ... and next door is the Victoria and Clutha Bars, a popular folksy "nite spot" which is reported as offering "good food" but did not seem quite the right place for the "old uns". Ten years ago, the bar was in the headlines as the sight of a tragic helicopter crash.

The fbbs dined in the Italian caff set within the hotel block. 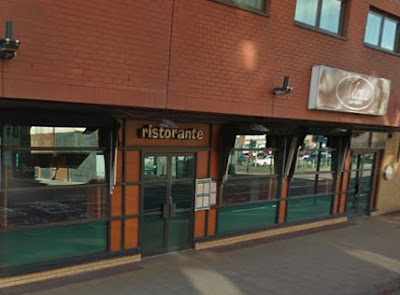 The train coach was booked to leave at 1230, so there was an hour or so to fill. Mrs fbb repaired to Buchanan Street ... 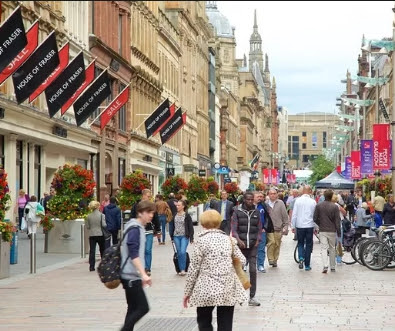 ... arguably the upmarket shopping area of the City. She spent nothing.

Contrary-wise, fbb settled himself at the junction of Argyle Street and Union Street to watch the buses! 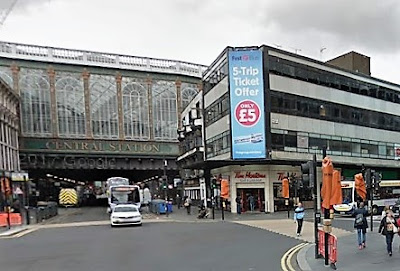 The glazing is part of Glasgow Central Station; the "tunnel" underneath is known as the Heelaman's Umbrella as a Scottish reference to the stereotypical financial prudence of those from the North of the country!

For as long as Mrs fbb (Glasgow born and bred) can remember, traffic has travelled northbound up Hope Street (West of Central Station) and southbound to the east thereof. 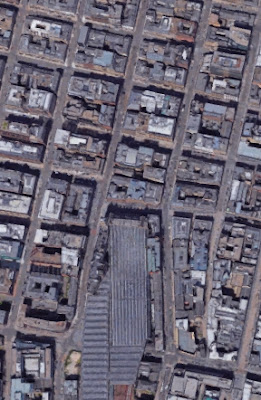 fbb stood at the crossroads next the station bottom right. Argyle Street used to be two way from that junction eastwards, but it now one way (eastbound). Not only that, but a chunk adjacent to Argyle Street Scotrail station has been pedestrianised. 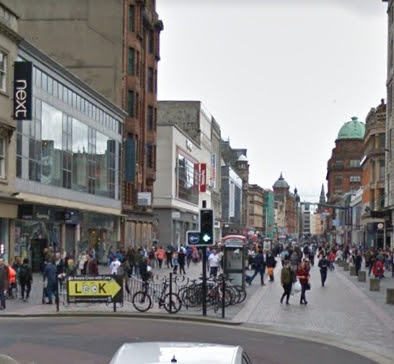 Very nice for pedestrians, but eastbound buses have a hefty diversion to contend with whilst westbound passengers suffer a less than pleasant back street wiggle in the other direction ... 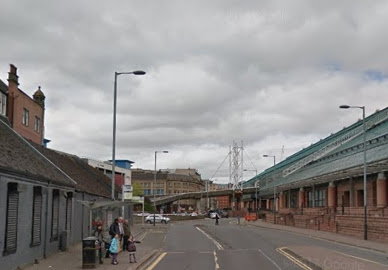 ... including the second (and more spooky) Heelaman's Umbrella on Midland Street. 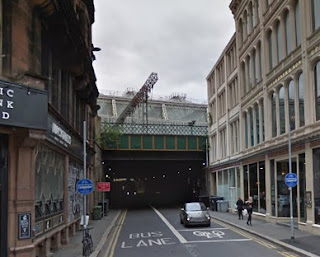 An fbb sketch map will explain all. Only routes to/from south and east are shown. 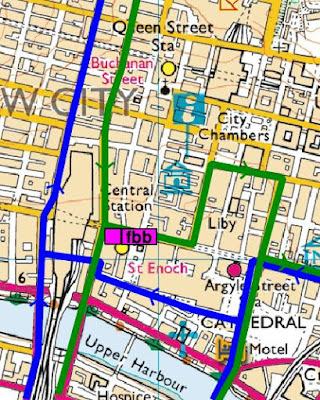 So what did fbb spot.

Not many eons ago, First introduced a brand new network throughout Glasgow called "Simplicity", replaced, according to fbb's observations by an unadvertised "Simpli-Isny". (Ask  a Scotsperson fort an explanation of that title!) 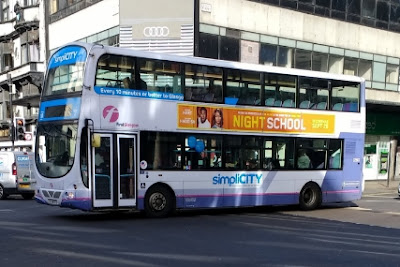 The brand had all but disappeared from vehicles and there were a few more with blue remnants. 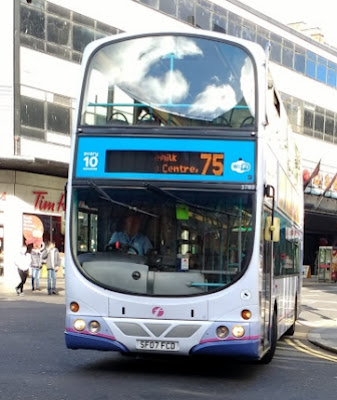 The same simplicity blue is being used for "Lanarkshire" branding ... 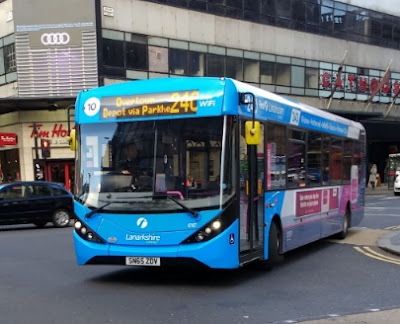 Service 9/9A via the Paisley Road bore a distinct pink (or maybe a juicy pucey shade) ... 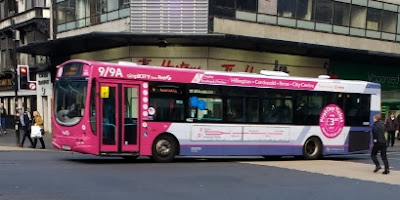 ... provoked, presumably, by competition with frequent McGills 38 along the same route. 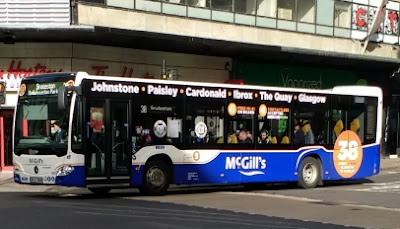 Stagecoach's only "proper" City bus route, the X19, passed by, every ten minutes ... 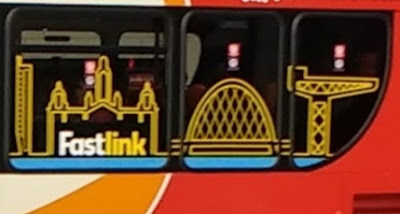 All of these matters will feature to a varied degree in future blogs. There was one other First brand ... 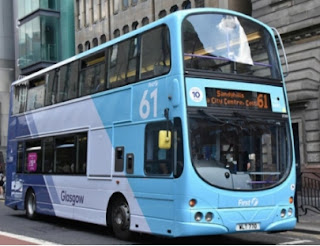 ... which appeared to be a one-off - more info is being sought! And there were very few buses left in the original barbie! 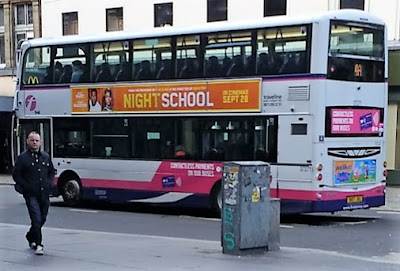 Also passing by was Citybus' only commercial service, route 17 ... 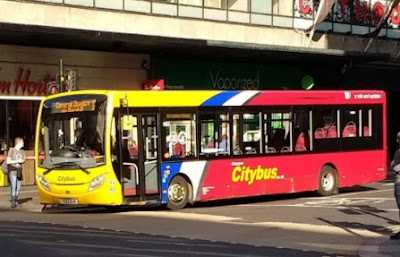 ... and the SPT liveried 59 which is actually operated by First! 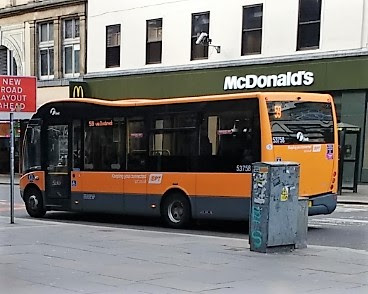 An "informed source" tells fbb that 75 new buses are arriving in the next few months and they will bring "more route branding". Details awaited!

But the morning soon passed and Doig's finest awaited the party's assemblage for a four and a half hour drive to Morar. 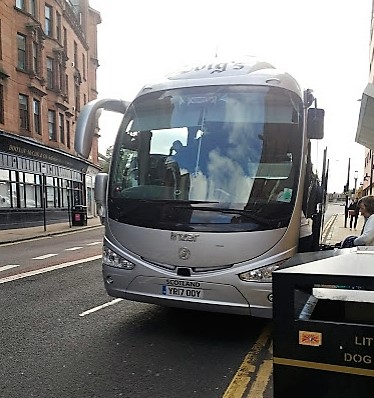 Because the ride was scenic (magnificently so) the report will be merged with a blog from Tuesday 25th September when scenery and steam meets Harry Potter mania.

Arrived Waterloo concourse 1605
1620 to Axminster (and Exeter St David's)  CANCELLED
Not completely; in small print -  Starts from Woking
1604 to Portsmouth Harbour (calls Woking) -  expected 1714
1549 to Bournemouth (calls Woking) -  LOADING
The chase begins! (NO announcement at all re Woking)
Run (slowly!) to join 1549 which leaves at 1610
Apologies - signalling failure YET AGAIN
Crawl most of the way past Clapham Jct
Certain to miss 1652 (1620, as wasn't, from Waterloo)
Approaching Woking an announcement -
I have asked that the 1652 to Exeter be held
Yippee - but short lived
Announcement - SWR control have refused to hold the 1652
Sulk Rage Fury Resignation!
Travel forward to Basingstoke where
the 1650 from Waterloo to Salisbury is now starting on time at 1738
It never got to Waterloo
Travel forward to Salisbury where
the 1720 from Waterloo (which left late at 1730)
is now reported as  43 minutes  late.
Travel forward from Salisbury to
TISBRYL arrive 1950 approx

??? (=Tisbury Loop but shown in the "delay" timetable on-line!)
Announcement - we are outside Tisbury
the 2005 Tisbury (to Waterloo) has already entered
the single track section, so there will be a further
delay of 15 to 20 minutes.
Yep! It was twenty!
Scheduled fbb arrival at Axminster 1905
Actual arrival at Axminster 2109
(on the train due at 2005)