Change Of Tune Crossing the Lune (1)

Back in February, fbb was blogging about the closure of the Greyhound Bridge in Lancaster. For readers who are gluttons for punishment the series can be re-read by clicking below.

But if your masochistic tendencies are diluted, there is a brief summary below.

This structure previously carried the railway line between Lancaster Green Ayre station (on the banks of the Lune river) and Morecambe. 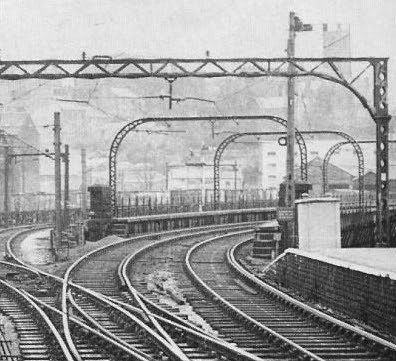 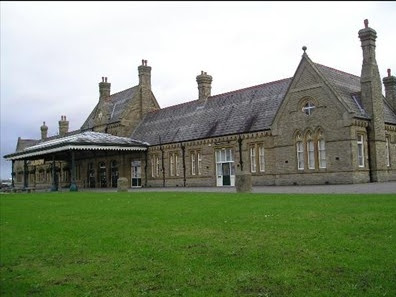 The bridge had been deteriorating for many years with ever protective weight restrictions and had reached the point where a major rebuild was necessary. 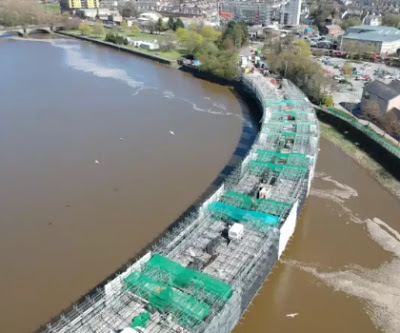 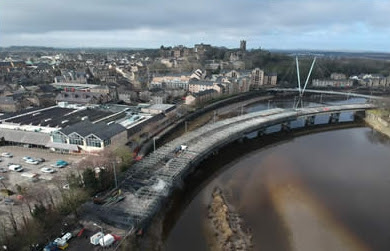 A great photograph of the hydrodemolition and encapsulation works at Greyhound Bridge in Lancaster on behalf of Lancashire County Council. Ongoing works and into the 8th week of a 47 week contract.

The bridge was closed completely and traffic on the nearby Skerton Bridge became two way complete with a re-organisation of the junctions on the city side of the river.

This was the bridge last week, with the "blacktop" being applied ... 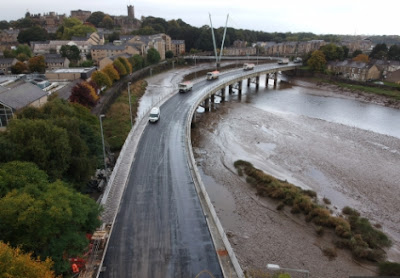 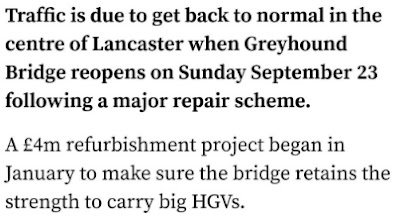 ... the road has opened. (Or if there is another false start, has NOT YET opened).

Publicity from Stagecoach for the original closure was generally very good, although there were concerns that detailed term-time dates for the University had been omitted. Everything was a distinctive orange ...

... with plenty of route by route leaflets. 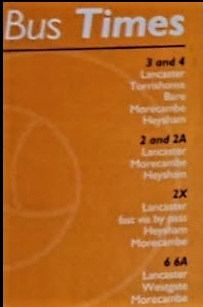 In essence, what Stagecoach did was to split its cross-city routes at Lancaster bus station and add in extra turnaround time to compensate for any possible traffic congestion. In the end things went better than everyone expected, the hold-ups were not as bad and the planners thought and some tweaking of times happened after a few weeks.

One of the biggest hold-ups was cloggage in Lancaster bus station witb the buses with nowhere to hide whilst waiting for their over-generous "layover" to run it course.

Routes south to the University gained a "U" prefix to avoid confusion with their chopped-off Morecambe parts. 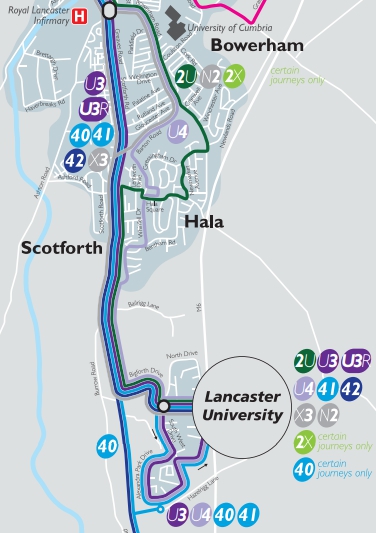 It all seemed to work well and, despite extra journey times due to both the chop at the bus station plus extended running times between the city and Morecambe, most folk coped with reasonable good grace.

After all, it would all be put back together again when the bridge re-opened.

Except that it wouldn't quite go back to exactly the same state. Stagecoach let it be known that they were planning a "revision" of their whole "local" network which would be introduced as soon as the bridge became available again.

Correspondent Alex, who started this whole thing off by sending fbb some photos of the "orange" publicity, has emailed some pictures of the new publicity - plus comments - for fbb's and our readers' edification.

And, once again, the Stagecoach boys done good!

Last week, timetable leaflets for all the changes were available at Lancaster Bus Station ... 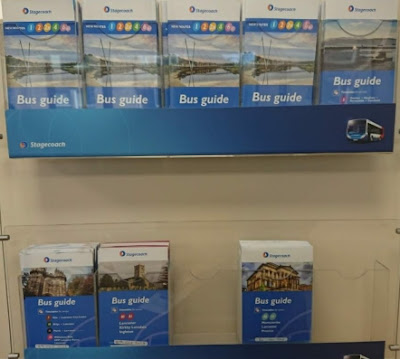 ... with one "booklet" for the big change (below, bottom right) and separate leaflets for the "others". 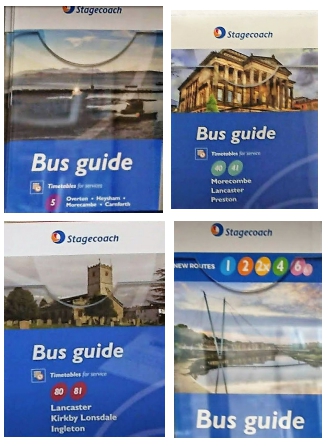 Sadly, all this publicity was printed for the expected September 23rd start date, but hearty congratulations to Uncle Brian (Souter) who, it is rumoured, cycled all the way down from Perth to help the staff write and affix sticky labels with the new date.

Offset this against a bit of a bludner with the 40/41 leaflet. 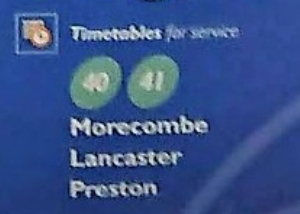 Correspondent Alex found the "open out" leaflets unwieldy, requiring copious folding and rotating to get to the bits he needed. 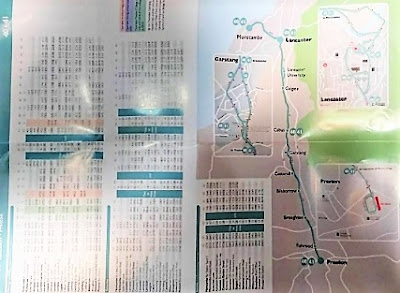 He was, however, impressed with panels (internally illuminated) at the stands explaining the "big change". 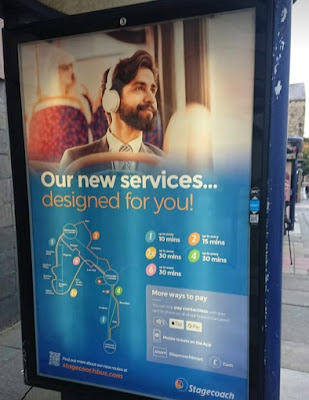 Also available was an overview leaflet and map for the much modified local network. 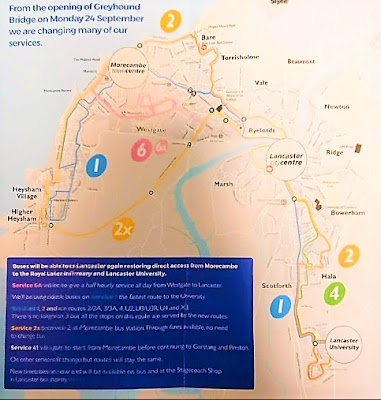 Certainly, if you were passing through Lancaster bus station, you could be in no doubt that something was happening today.

Morecambe's bus station used to have an enquiry office ... 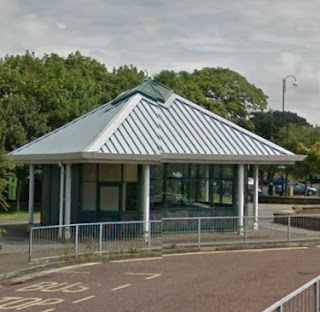 ... but if Streetview is to be believed, it looks very unused!

fbb would be interested to hear where else the information could be obtained, apart from "on-line".

In tomorrow's posting, your elderly blogger will attempt to unravel the new network and see whether it represents an improvement or a cut-back.

And From Doctor Who
You have to smile at this. Jodie Whittaker, the new Doctor, was being interviewed on American TV. The programme provided subtitles. 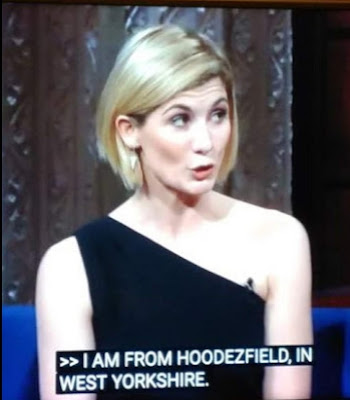 Now, Patrick Stewart (Star Trek, X Men etc.) also comes from Mirfield near Hoodezfield and he had a bus named after him in New York ... 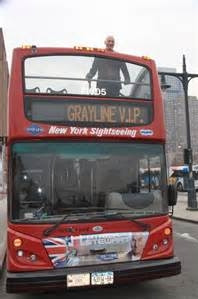 ... and, if fbb remembers correctly, one from First Hoodezfield.

So, come on First, get your sticky lettering out and celebrate a local heroine and a Time Lord-ess. 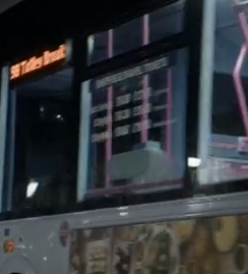 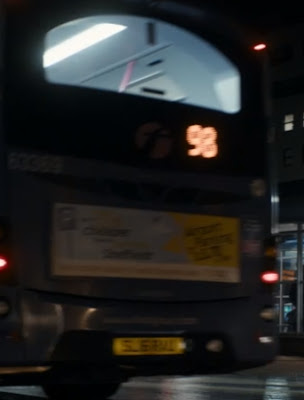 Plus a short scene at Sheffield Interchange! 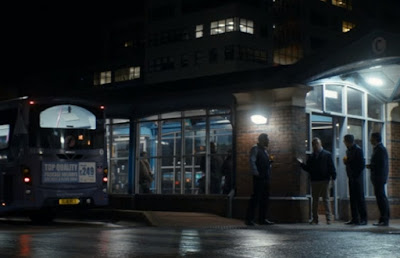 Next Lune-y blog : Tuesday 9th October
Posted by fatbusbloke at 02:00