Change Of Tune Crossing the Lune (4)

The Horrors of Heysham
No reflection on this happy community, often subsumed as a mere subsidiary of Morecambe ... 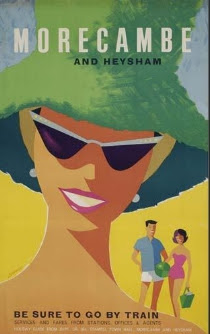 ... but a reflection on the complexity and potential confusion of their bus service. Here is the pattern before this week's network change. 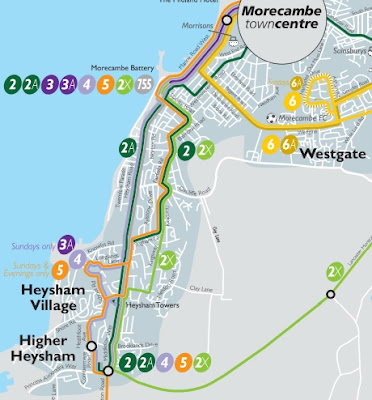 Non residents will grapple with the geography (Heysham Village, Higher Heysham, Heysham Towers) but bus users had to cope with:-

2 and 2A (DARK GREEN) - two different routes to the terminus at Combermere Road.

2X (LIGHT GREEN) - an "express" route to Heysham via the newish Bay Gateway Road following a third route through the housing areas. And then, some route 2 buses became 2X buses at Morecambe (and vice versa) - but some didn't.

5 (ORANGE) - Overton, Heysham, Morecambe, Carnforth - hasn't changed and ought to be simple, but in the evenings and on Sundays did an extra wiggle via Heysham Village because the 3A and 4 didn't exist at those times.

4 (PALE PURPLE) joined the 5 via Higher Heysham but provides the Monday to Saturday daytime service to Heysham Village.

3A (DARK PURPLE) ran on Sundays when the 4 didn't. You will remember that the 3, 3A and 4 all followed different routes in Bare between Lancaster and Morecambe.

There were two common points on the Heysham routes. Travelling from south to north we first meet Combermere Road. 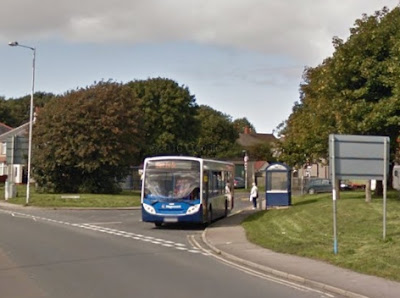 Then there is Heysham Towers where we have a very tidy bus turning circle. 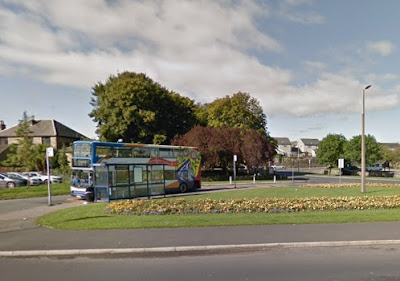 The stretched double decker is a quirk of Streetview, not an unpublicised newbuild for Stagecoach. But there is no Heysham Towers!

There used to be. 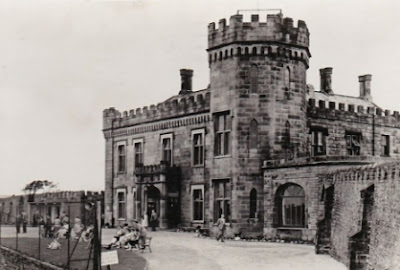 A posh private pad, Heysham Tower, gained an "S" and became a family-owned holiday camp in the 1920s. It was later re-branded ... 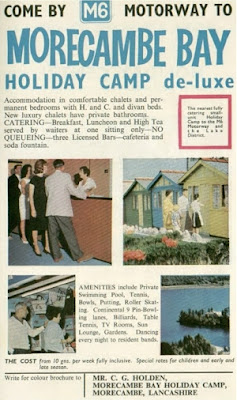 ... although it was some distance from the beach and the bay.

It had all the usual delights, namely a swimming pool (outdoor, of course - holidaymakers were a hardy lot back then) ... 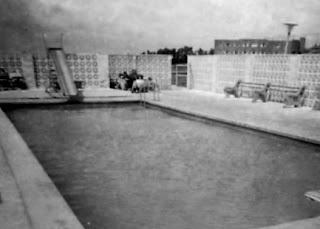 ... and ballroom for evening entertainment ... 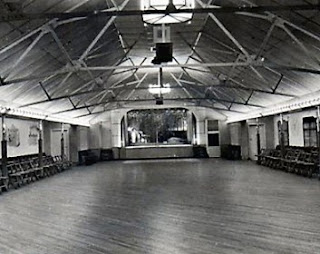 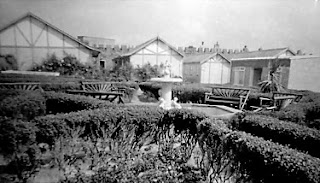 You were woken up to the jolly strains of "The Happy Wanderer"!

By the late sixties the whole area was in decline for holidays and the camp closed in the early 70s and, as you might have guessed, is now a housing estate. 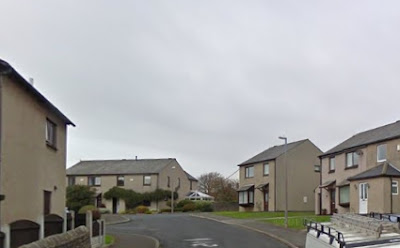 No more Heysham Towers but the fifty year old name persists - and probably always will!

So, back to the buses and this week's new network. Is it tidier and a little easier to understand. 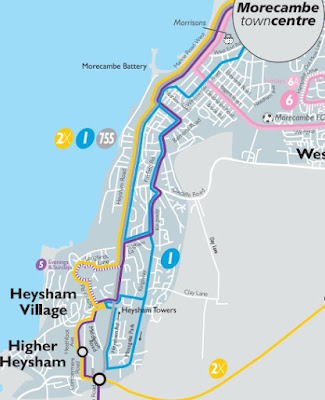 Service 5 (was orange) becomes PURPLE but is otherwise unchanged. It still does its Heysham Village diversion evenings and Sundays.

Services 3 and 4 (were purple) are now service 2 and 2X (ORANGE) with 2X buses becoming 2 (but a different 2, of course) in Morecambe.

One of the consequence of the 2/2X link is that journey planners simply don'y work. You are either offered a 2X via the Bay Gateway road and a long, long walk ...

Services 2, 2A and 2X (were green) become new service 1 (BLUE). Whereas the 2 and 2A showed which way the bus was going (via Kingsway 2, via Heysham Road 2A) the number 1 is used for both routes.

Bus watchers feel that the Heysham Road journeys should show 1A. Maybe the thinking is that having 1 AND 1A at the University will confuse the poor students. 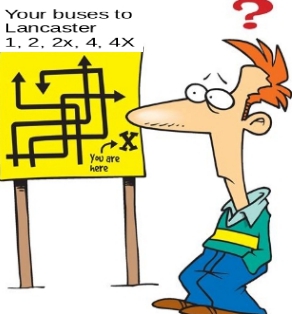 Will passengers make mistakes? Possibly they will, especially if buses have become bunched earlier in the route (as for Lancaster University) and start to run "out of order".

One "complication" is that the shaded journeys (above) do not run during University vacations.

A more perplexing problem could be caused by the end of the route. It runs via Mossgate Park ... 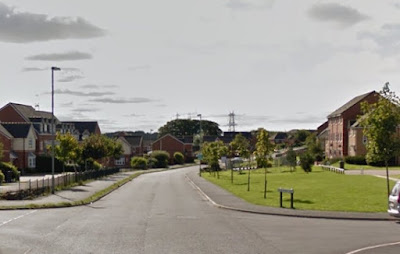 ... and area not previously served by bus.

But it's a loop. Surely the timetable should have a time point for Mossgate Park on both the outward and return tables?

Loops are an easy way out for the bus operator, but a difficult concept to cope with for the passenger. When would you expect your bus to turn up at Mossgate if you wanted to go to Morecambe? Will it run early? Is it easier to walk to Heysham Towers rather than face the uncertainty or sit waiting for your departure time at the Towers "terminus"?

Lancaster Bus Station - A P.S.
One of the challenges with bus travel in Lancaster is that the dominant operator is Stagecoach who produce some excellent publicity. But they do not include services operated by the other company, Kirby Lonsdale Coaches. 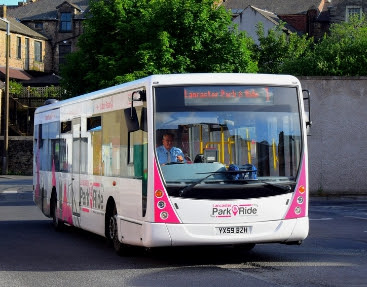 Amongst their Lancaster routes is the Park and Ride which used to show route 1 until Stagecoach pinched it for their new network!

Now Lancashire County Council no longer publish a bus map, there is no combined cartographic entity to show everything. Or, more correctly, there wasn't until now.

The Lancaster Bus Users Group has commissioned a diagrammatic map of the City including Morecambe and Heysham showing all "normal" bus services. It appeared in the LBUG display at the bus station several days before the timetable changes. 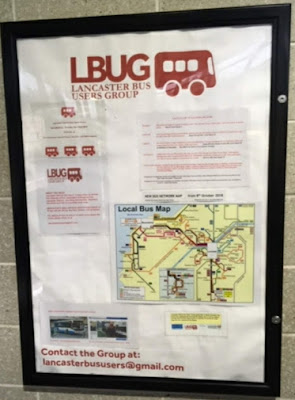 If you wish to enjoy, explore or check the LBUG efforts larger version is below. (click on the map to enlarge it) 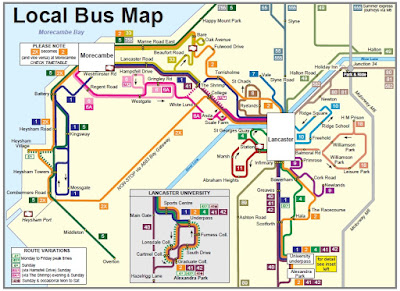 At the time of writing it is the ONLY network bus map on display at the Lancaster bus station.

The person who has designed this stunning piece of cartographical genius is a shy a self-effacing individual who prefers to remain anonymous. Something of the map's background can be explored (here)

An extension of the map to show longer distance "country" routes is likely to appear soon.

A Response to a Comment
Anonymous is quite right.

BUT, yet again, his (or her?) comment is based on the unwavering belief in the UK's "commercial" bus system - a system which is increasingly failing to deliver what "the public" needs. Other methods of funding exist that rely on revenue from sources other than the farebox. If our "society" wants to encourage students to travel by bus rather than clogging up Lancaster with cars, then extra buses need to be provided at Peak Uni times.

If the Uni relies on student housing remote from the campus, then it is their responsibility to ensure there are adequate travel facilities.

Historically, the whole idea of Unis like Lancaster was that work, recreation and residence should all be centred on one campus.