Change Of Tune Crossing the Lune (2)

The changes in Lancaster provoked by the closure of the Greyhound Bridge merely split cross city routes at the Bus Station to make regulation and recovery from possible traffic chaos much easier.

With the re-opening of the bridge yesterday, Stagecoach also introduced a re-jigged city network. To understand the changes, it will be easier to take it in three chunks, as follows:- 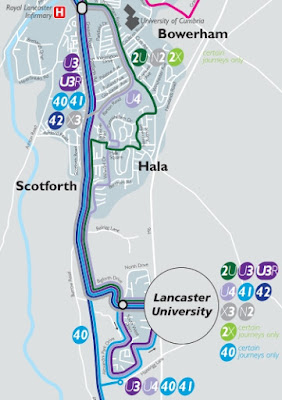 Service 3 provided the main road and quickest route into Lancaster with 3R journeys serving the city's railway station. The combined frequency was every 15 minutes. Service 4 (pale purple) ran every 30 minutes via a slightly slower route.

But, oddly, the most frequent route (every 10 mins) was the 2, which was also the slowest. 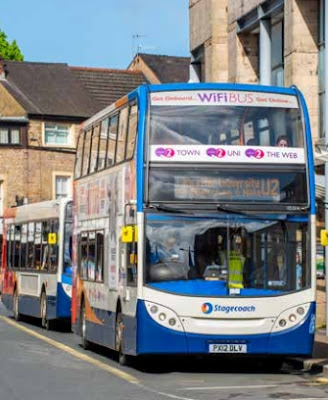 You would expect students to prefer the 3 and often they did, leaving the 2 behind. But because of the route between Lancaster and Morecambe, the 3 and the 4 had to be single deck ... 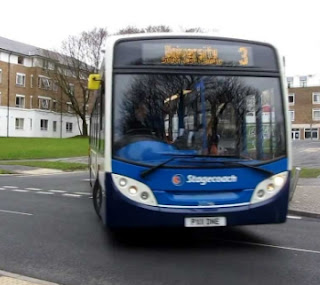 ... whilst the 2 could be operated by double deck vehicles.

So the single deck 3 was often student-stuffed, much to the chagrin of local Lancastrians along the main road who often saw 3s zoom past with a "three bell load".

To resolve this quandary, things have been significantly re-jigged at the Uni. 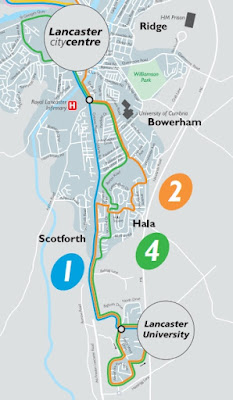 The 3 has become the 1 running every ten minutes with double decks and the 2 remains the 2 but now runs every 15 minutes with single decks. On the south side of the city, the 4 is largely unchanged but now runs to the railway station in place of the 3R.

It makes sense and only one service is renumbered (3 to 1).

Please note that the new map ONLY shows the revised network; other longer distance services (40, 41, 42) pop into the Uni campus at various times.

Morecambe Movement
It gets just a bit more complicated between City and seaside town. 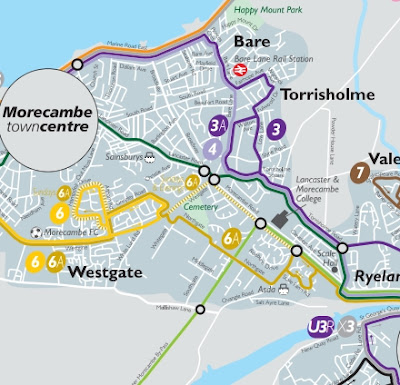 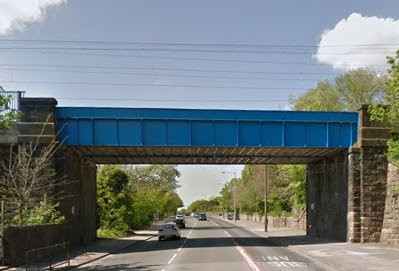 ... before turning inland to run via Torrisholme Square ... 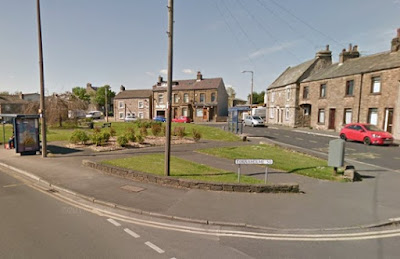 ... (picturesque) and back to the main Lancaster Road and into Morecambe.

The 3 and 4 complex (PURPLES of various shades - which included an evening 3A when the 4s didn't run) left Lancaster via the low rail bridge - hence single deckers - on Torrisholme Road ... 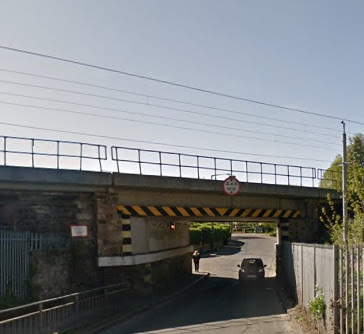 ... again calling at The Square before following two different routes to Bare and Bare Lane Station. 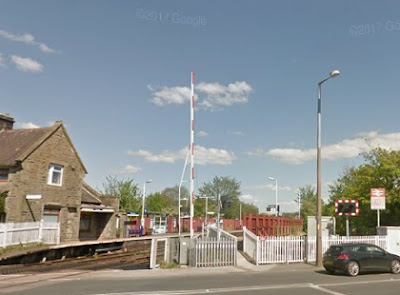 The new network is quite different this time, although still broadly following the previous pattern of service.

But it has been "simplified"! 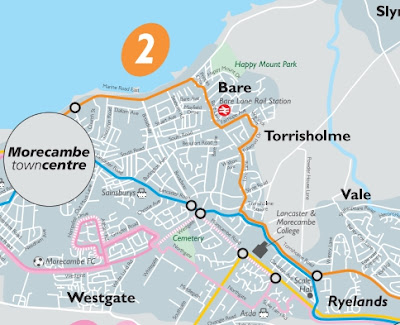 Route 2 has become Route 1 (BLUE) - simple. Routes 3 and 4 have been combined and are now Route 2 (ORANGE), still every 15 minutes, but not serving a large part of Bare Lane ... 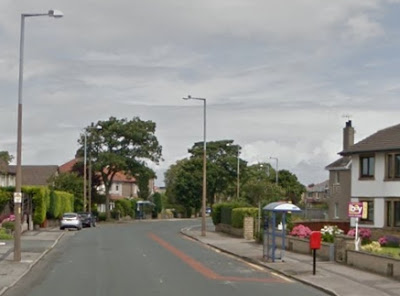 ... which loses its buses completely for much of its length. Presumably, the Stagecoach bean-counters reckon there is more dosh to be made out of an increased frequency via Low Lane ... 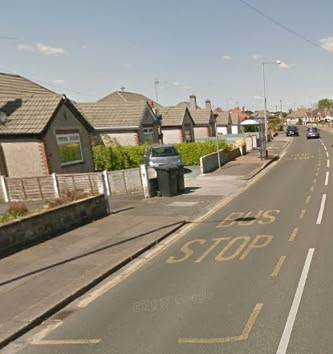 ... where the length of the bus stop "box" suggests that articulated vehicles are on the way. They aren't! Likewise the Fulwood Drive "wiggle" now gets a bus every 15 minutes rather than every 30. 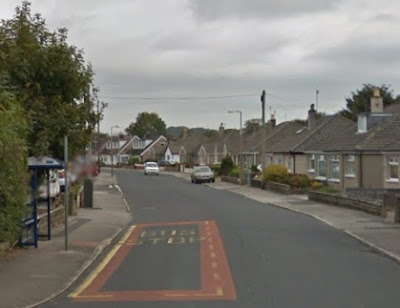 But leaving Bare Lane with nothing does seem an odd decision. Expect letters from 107 year old Winnie Witherspoon who can no longer get to her Zumba classes!

But we must go back to the new one, The 1, where it faces an identity crisis at a roundabout on the Morecambe Road. 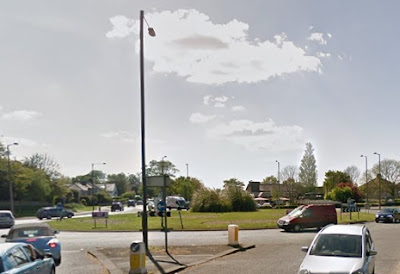 It is a perfectly ordinary roundabout, seen above as the buses approach from Torrisholme. It is called "The Shrimp". Everybody (fbb is told) calls it "The Shrimp", even the BBC local news in a recent road accident report.

But there is no "Shrimp" to be seen. 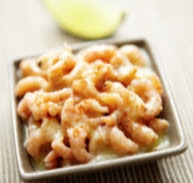 Once upon a time The Shrimp (bar and caff) was there ... 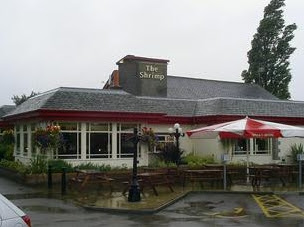 ... but it has transmogrified into a Toby Carvery! 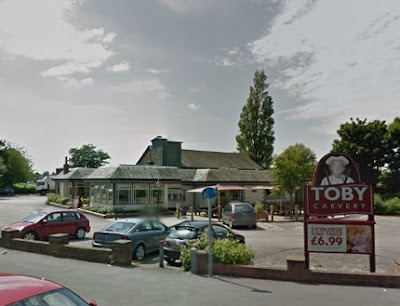 As in so many things in public transport nomenclature, its name would appear to fixed as "Shrimp", unchangeable, immovable yet quite irrelevant!

Suggestion to the Council : get some local artist to create a giant shrimp sculpture and plonk it on the roundabout; common sense restored! 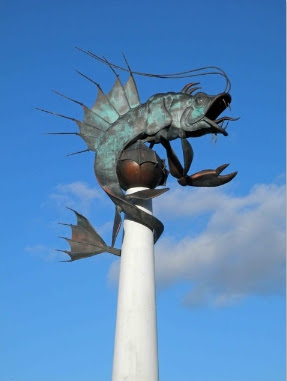 There is a jolly shrimp up a pole at the Barbican in Plymouth; something like that would be good.

But we pause there to record that there is an hourly service along the Morecambe Road, unlike the 1 not via Torrisholme. 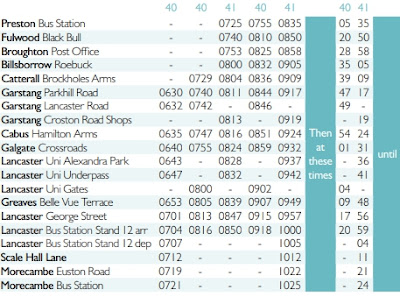 The equivalent of this service was withdrawn during the Greyhound Bridge closure, but it seems strange that its replacement is not included in the "changes" booklet together with 1, 2, 4 and 6; neither does it appear on the map. It is the fastest bus between the two centres! The 41 also provides a fast through service between the University and Morecambe.

Odd to leave it out.

Tomorrow we will finish this survey by looking at Heysham and trying to understand the complexities of route 6!

Next Lune-y blog : Wednesday 10th October
Posted by fatbusbloke at 02:00