Luton Airport is a busy place for buses (illustrated top to bottom). Arriva   100  is part of a 20 minute frequency route between Luton, Hitchin and Stevenage. Once an hour a bus runs via the Airport.

National  Express   707  runs every two hours from Northmpton to Luton and Gatwick airports.

EasyBus  runs about every 20 minutes to Baker Street. This and the A1 (below) displaced Arriva's London express service back in May.

Stagecoach   99  is the successor to the Virgin branded service linking the airport with the West Coast main line at Milton Keynes. Despite the removal of Uncle Richard Branson's iconic brand from the service, this change has not been spotted by the Airport authorities! 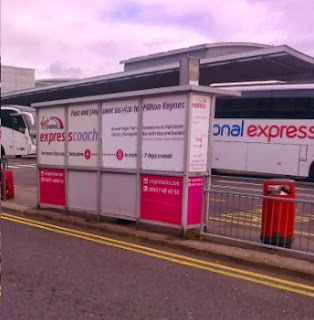 fbb hopes passengers don't miss their bus on account of the confusion.

This list is by no means exhaustive but it does give some idea of the public transport activity over about 10 minutes whilst fbb was waiting to board Arriva's busway A. 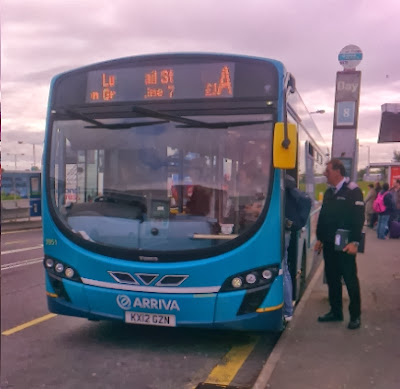 Oddly, the service didn't want to admit to its full route and destination, showing only Luton Rail Station on its screen. The only other information was the usual and less-than-helpful departure list. But one reason for this limited display became obvious with the arrival of a bevvy of luggage-encumbered foreign tourists clutching pre-booked tickets. These were for journeys forward to London by Arriva's 757 from the Interchange ... 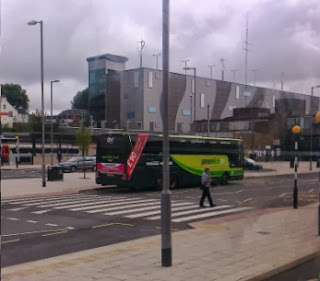 ... and for "code sharing" Terravision bookings, also carried on the 757.

Publicity on the busway itself is much as would be expected. There is a large panel with a departure list but no timetables at all ... 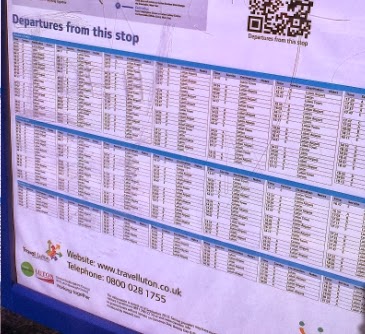 ... the clunky route diagram as covered in yesterday's blog (read again). There is a useful local street map ... 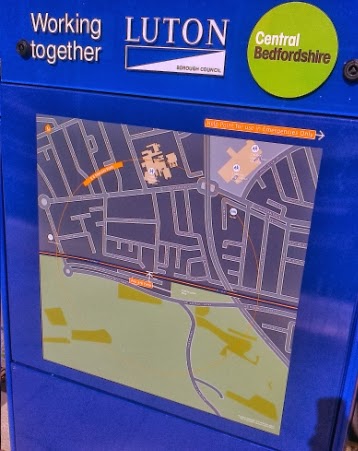 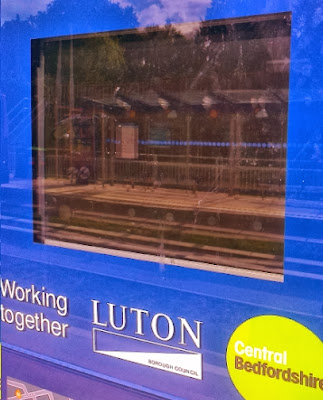 ... with sunshine and reflections. The screen above is giving the weather forecast (for people who will go home and not take the bus when it's raining?). The screen below gives the times of the next six buses:- 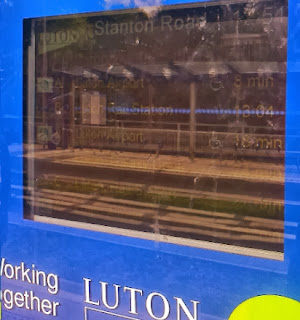 So really useful, eh? fbb spent 30 minutes or so observing passing buses at the "Hospital" stop. Arriva, of course ... 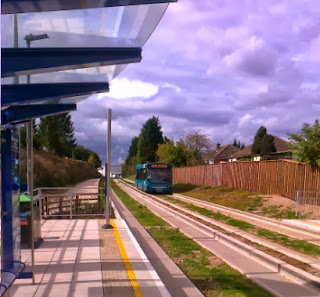 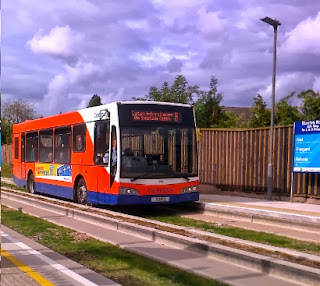 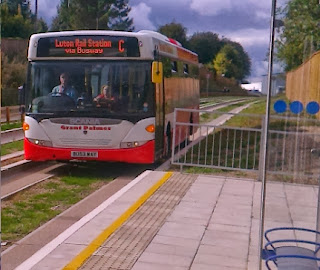 Do our esteemed blog readers spot what wasn't there? Correct! Passengers. 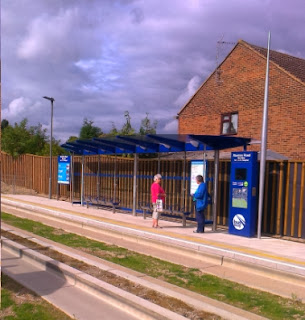 In the half hour of fbb's observation, only one female personage (in blue) came from afar to board a bus; the lady in pink was changing from one route to another because of different destinations in Luton. Intermediate loadings are sparse; the majority of the 8 passing journeys (4 in each direction) simply passed!

But, anxious to experience the whole, erm, experience, fbb rode on to the terminus at Parkside, part of Houghton Regis. Once off the busway itself, the publicity machine had run out of whatever makes it go. (publicity?) There were nice shiny bus stop flags ... 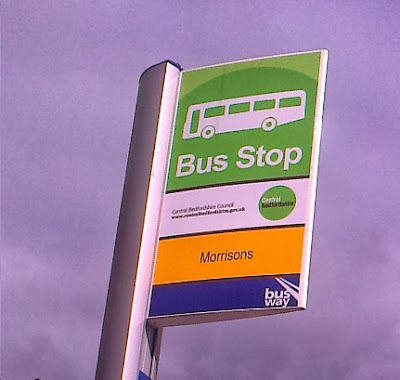 ... courtesy of South Bedfordshire Council (have a house point, people) but almost blank fames in the shelters ... 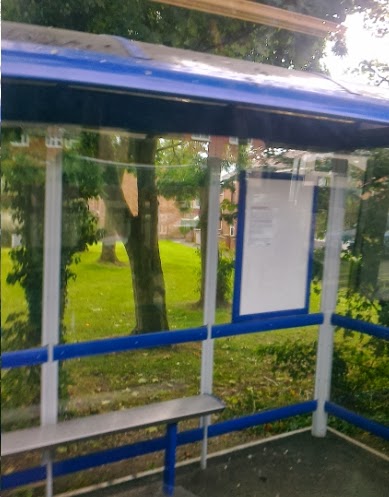 ... certainly nothing matching the provision at the busway stops. Presumably no money? Or no effort? Or no understanding? So much so that a gaggle of potential passengers at the Parkside terminus had absolutely no idea what bus route A was. They were waiting for the "normal" 38 to Luton via Leagrave, the Hospital and the main road. 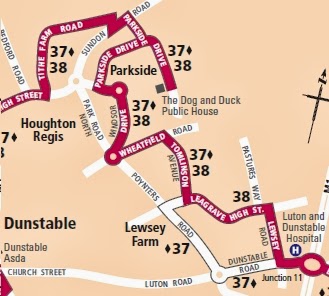 The driver (correctly) promised them a faster journey and, with much debate and some misgivings, they joined the A.

Time was running out on fbb's schedule and refreshment was needed before returning south and west. Fortunately route A calls at Houghton Regis Morrisons whereat there is a caff.

Tomorrow we address, once again, the challenges of bus/rail interchange at Luton, and, in passing, find a supply of bus timetables.


Next Bus Blog : Wednesday 23rd October
Posted by fatbusbloke at 02:00