Not Passing through Newton Poppleford [1] 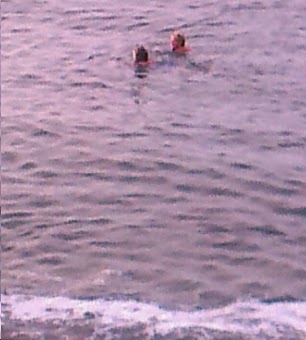 ... gave up their daily swim in late September. The friendly contract gardener is uprooting the remains of Summer's spectacular displays and ... 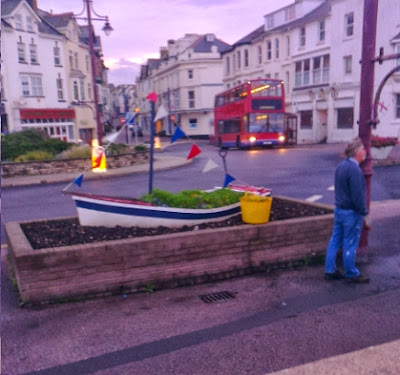 ... returning the beds to winter fallow. Seaton's remaining fishing boat, which has gone nowhere all season (except to the bottom when it sank), ... 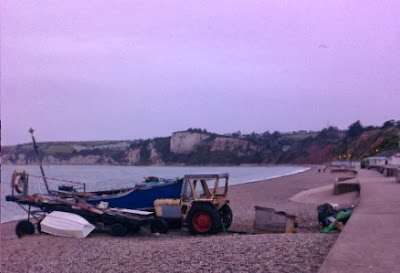 ... has been hauled up to the top of the beach to protect its remains from winter storms. The X53 Sunday service ceased on 23rd September, adequately publicised by First who posted a correct timetable in the frames during the preceding week. 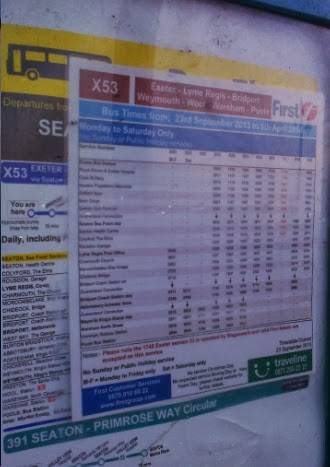 A week later and a week late, Devon Council flung out First's useful whole timetable and replaced it with their own less helpful part timetable. 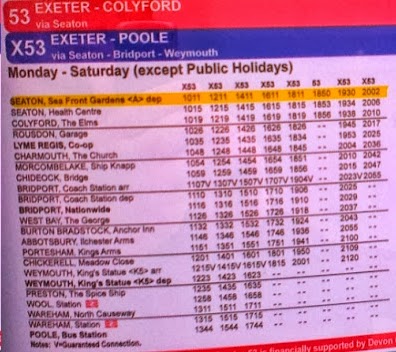 The sea front caffs are mostly closing with some, e.g. The Galley, soldiering on more in hope of a passing customer than anything else. 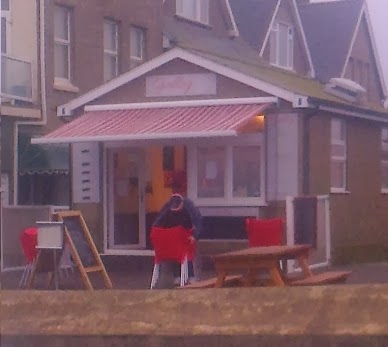 Here "mine host" is setting up in damp and dreary mist at 0700 one day last week.

Yes, Seaton is sinking slowly but surely into its seasonal somnolence.

But there are excitements for corpulent blogging omnibologists:-

Warning : traffic disruption
at Newton Poppleford for 19 weeks
During the £500,000 scheme the water company will be upgrading 1,025 metres of old three-inch concrete water mains to address the issue of frequent bursts in the area. Work starts on Saturday 5 October and will take 19 weeks. The A3052, between Venn Ottery Road and King Alfred Way, will be completely closed to traffic for three weeks from Saturday 5 October until Sunday 27 October. Clearly signed diversion routes will be in place. Two-way traffic lights will be in use for the remainder of the work. 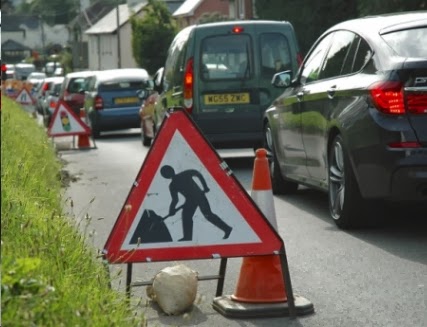 That is a complete blockage of the main road to Exeter. The local press is having a field day!

There are fears that a major road closure in Newton Poppleford and the 26-mile diversions to avoid it could cause “chaos”, “knock the village sideways” and bring East Devon to a “standstill”. Concerns have also been raised that Newton Poppleford’s Back Lane could block-up as residents seek alternative routes around the village. In addition there are worries that pedestrians could be at risk if they have to walk more than two miles along the busy A3052 to pick up re-routed buses. The views, from concerned local residents and businesses, emerged at a busy drop-in consultation meeting held recently at Newton Poppleford Village Hall.

And it's bad news for the buses. 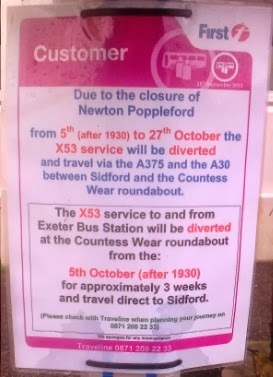 First's X53 between Poole and Exeter is diverted via Honiton and the A30. 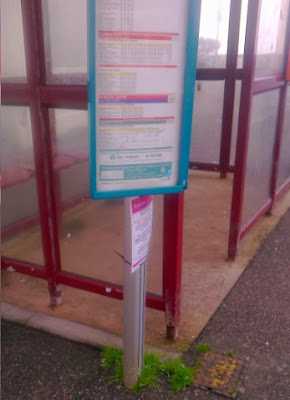 A notice (for passing dogs) to that effect is posted at the Marine Place stop in Seaton. Presumably, by running non-stop between Countess Wear and Sidford, the timetable will remain unchanged elsewhere. Hopefully First have told the residents of Newton Poppleford (Newton Poppers?) that they can "go whistle" for a bus to Lyme Regis etc.

Things are less easy for Stagecoach. The 157 from Exmouth to Sidmouth is diverted round the blockage via Tipton St John and reduced in frequency; but the 52A and 52B have a completely recast timetable. This is announced by a pink notice for smaller dogs ... 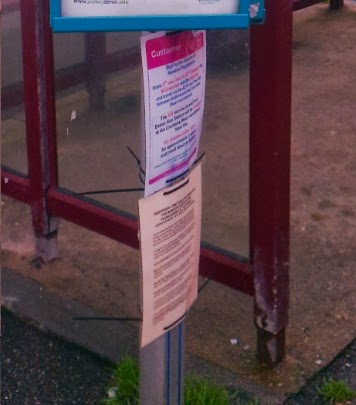 ... at some stops but also by copies of the full revised and rerouted timetable in all existing frames. 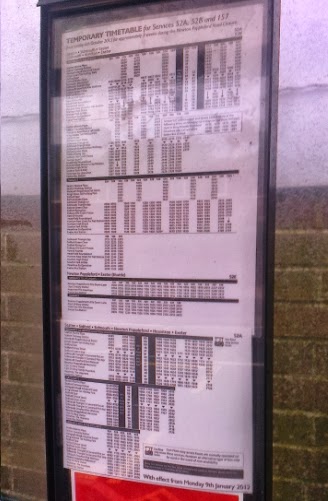 Which leaves Newton Poppleford itself.

This all kicks off from today.

So, always ready to take up his blogger's role as a fearless bus-disruption "war correspondent", fbb is out and about today sampling Stagecoach's services as supplied. Reports will follow soon, maybe even tomorrow if fbb gets back safely.

Get them to click again for full details. This is fun:- 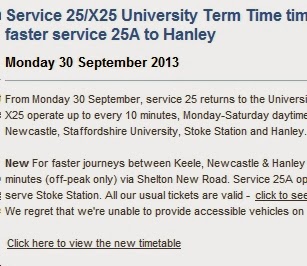 Get them to click again for the new timetable; such excitement:-

And, chortle chortle, then tell them they can't have one because you aren't changing anything anyway.

Further lessons will follow from time to time but thanks to First Potty for this superb example of the web manager's skill as posted yesterday October 6th. Now that date sounds familiar? Oh, yes! It's the date the timetables are changing.

Presumably the new timetables are now in the "current" folder, but young Gavin has forgotten to alter the link? Always better, Gav, to keep everything on one page, even if that means uploading the new timetable into two different places. And it saves lot of unnecessary clicking.