fbb is a star!

At least he was on his name badge for the launch of 26 new buses in Portsmouth on Wednesday, last. Well, it is only fitting for a hero of the bloggersphere! [Pause for venomous derision from blog readers!]. Arrival at the Dockyard was in a monsoon, but at the entrance stood a stalwart servant of Firstbus ... 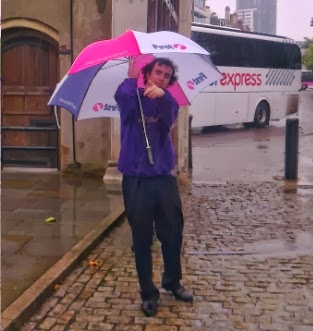 ... sporting First brolly (essential) and "Star" shirt (impressive) and directing invitees via a lengthy squelch to view the vehicles lined up alongside HMS Victory. 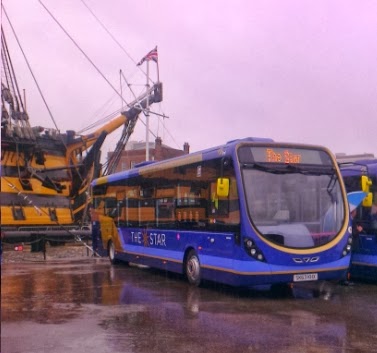 The plan, of course, was for us all to stand around drooling over he new buses; but the weather precluded such overt adulatory activity and the unbrollied invitees rapidly repaired to the conference room to drip dry. The "short tour" by bus enabled all concerned to drool a little more over leather seats ... 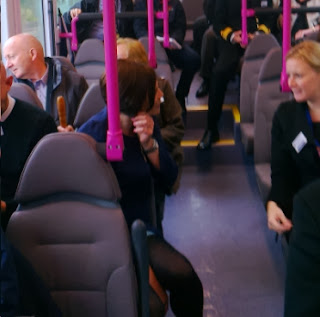 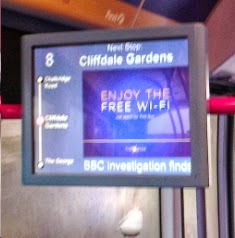 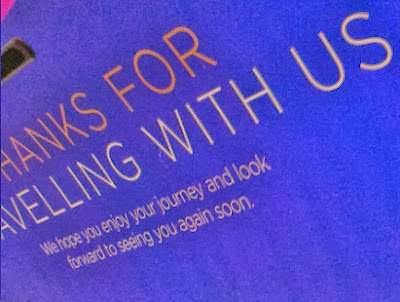 The tour took us to Portsdown Hill to enjoy a glorious view over city and Solent, but ... 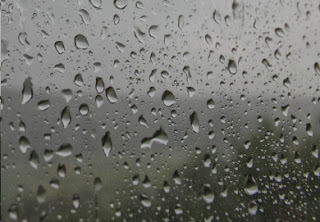 ... even the combined resources of FirstBus local and national management was unable to manage the meteorological misery. This is what it should have been! 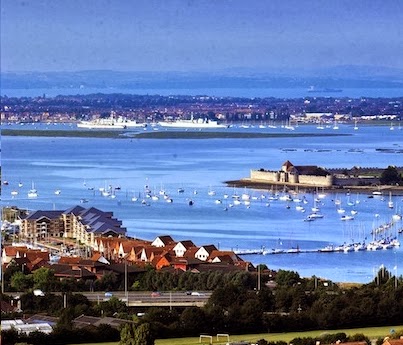 Back to base for the formalities; a string of speeches from VIPs, all of whom sported a gold star on their badge and all of whom accompanied fbb (should that be vice-versa?) on bus number 1. Surely el chubbo wasn't a VIP?

The lights were dimmed, there was an expectant hush ... followed by a loud crash as if the Ruskies were mounting a surprise SAS-style attack! Thankfully it was only a detachment of Royal Marines playing their drums and tootling on their tootle-floots! 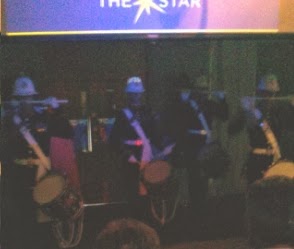 Difficult to photograph in the dark! Fortunately all the speakers were on bus No. 1, and some were captured by fbb's little phone camera, the rest c/o Google. First up was head honcho of First in Hampshire (and several other places), Marc Reddy.

He spoke with a level of enthusiasm and excitement that is rarely seen in the bus industry; but with 26 shiny new buses to play with, who can blame him? The finer detail of the development of the brand and its application was outlined by Sarah Wallbridge ... 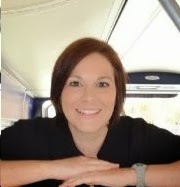 ... the regional marketing manager. She, too, was effusively ebullient about "The Star". One name conidered at an early stage was "Admiral". Now where has fbb heard that before? 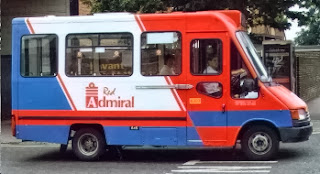 Next "up" (as we have to say these days) was the (sadly) inappropriately named Sunny Crouch from the gang that looks after the vintage vessels. 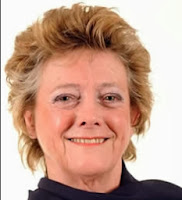 She gave us a thorough run-down of the excellent visitor attractions, well known to fbb as a former IoW resident and one-time organiser of many a school trip thereto. She has had a bit of  branding change as well, from Historic Ships to Flagship Portsmouth and back to...

Portsmouth Historic Dockyard. She had some free passes to give away and fbb was sorely tempted. But it was the politicians' prognostications promoting "partnership" that were interesting. We heard from Sean Woodward ... 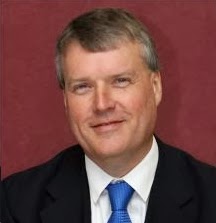 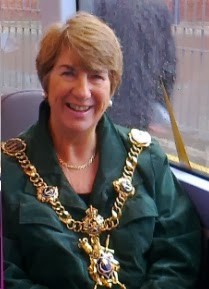 She spoke with political correctness about the benefits of partnership (good), the benefits of low-floor buses (not entirely relevant for this assembly) and the need for joint ticketing (agreed). But a post-prandial ride to Waterlooville and back reveals a very different interpretation of this "partnership" word. Once the border from Portsmouth City into Hampshire was crossed, all the stops were "Star" branded ready for Sunday, some spectacularly so. 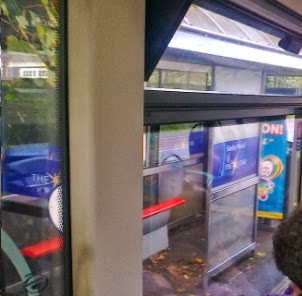 Some with smaller panels ... 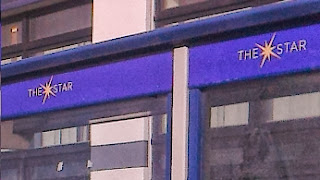 ... and all with at least some stars! 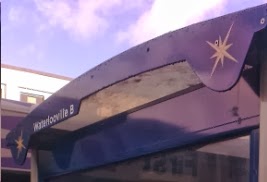 But in the City, nothing! What partnership? The pre-event briefing notes explained why.


The stops in the Portsmouth section of the route will not be branded because they are not dedicated stops.
.
This would be just like the "non-dedicated" stops in Waterlooville ... 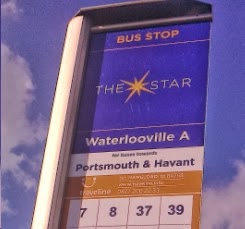 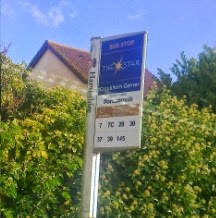 ... shared with Stagecoach routes. Compare this with "non-dedicated" stops in Portsmouth City ... 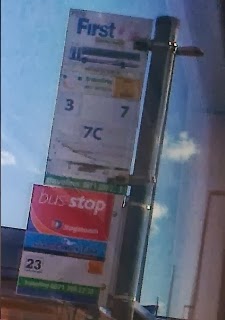 ... with separate flags for Stagecoach and First! But these cannot be branded "Star". Come off it, Mrs Lord Mayoress; this is just plain daft! Get it sorted - sensibly.

Rant over. Before lunch, the formalities were concluded by a few well-chosen words from Commander Tim Ash ... 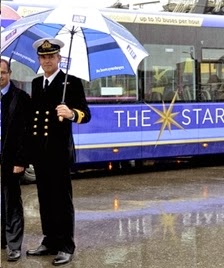 So, a mélange of FirstBus, Historic Ships, the Royal Navy and Hampshire County Council with a small "non-dedicated" dash of Portsmouth City all come together to produce something very special. For what it's worth (and that's not much) fbb thinks the project will be hugely (and financially) successful.

Oh, yes; there was a stonkingly good buffet lunch with superb puds. 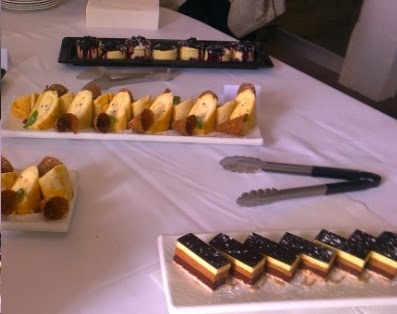 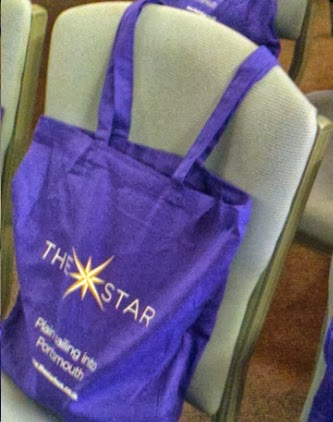 ... with lots of leaflets (slight yawn) and the best goodies fbb has ever collected ... 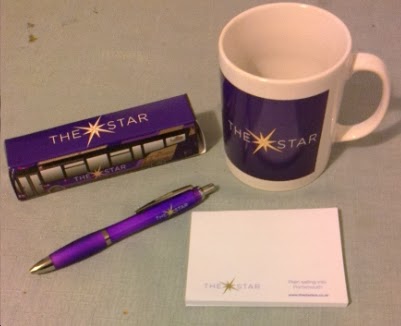 ... purple pen, bus shaped box of chocs, little notepad and "Star" mug. In the "Top Ten Chart" of bus-launch beanos, First's "Star" is the Star; clearly number 1 and deservedly so. fbb says a real heart-felt (and belly-felt) thank you for his invite.

Any more lunches (sorry, launches) First?; fbb will struggle to come along. This blogging is a tough job, but someone's got to do it.


Next Bus Blog : Saturday 19th October
Posted by fatbusbloke at 02:00