... which provides regional  television, explains all:- 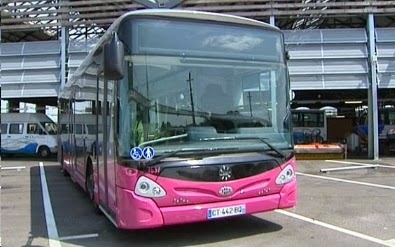 A complete replacement of the "main line" bus fleet with hybrid vehicles took place in 2012. Stunningly impressive, but only part of the story which also includes the new depot. These improvements, which also included a major change of the network, all come as a result of the return of trams to the Dijon streets. 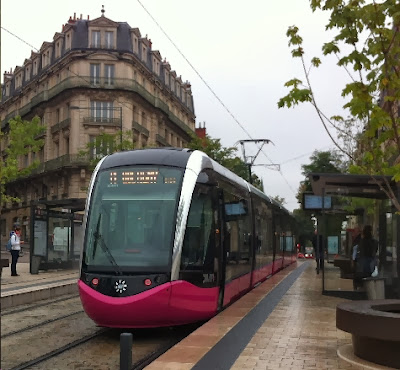 Line 1 opened for two day's celebration on 1st September 2012 with the normal service starting on 3rd. Line 2 followed on 8th December. The celebrations even included a tramway song and dance ... 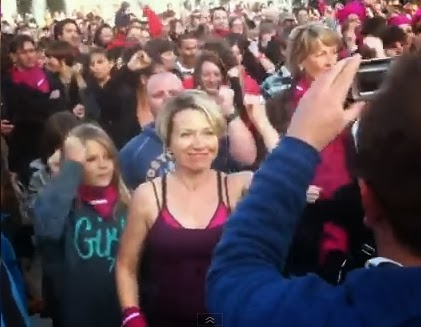 ... entitled "Tchou, tchou; c'est le tram!" [= "choo, choo" with a "hand pulling a whistle chain" action!]. Now there's an idea for the forthcoming Manchester and Nottingham extensions. Purpley puce was the colour of the new buses, the new trams, the inauguration posters ... 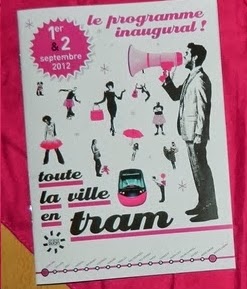 ... and a collection of souvenirs. 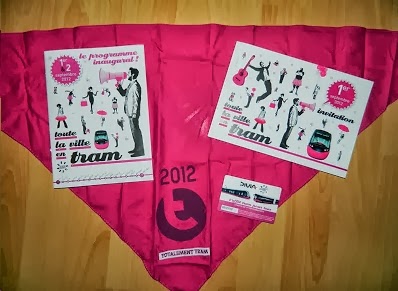 And even a cat joined in! 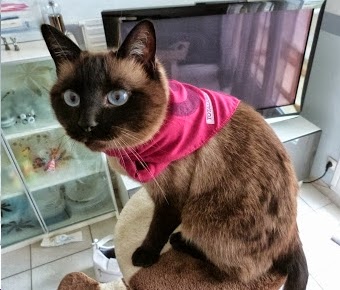 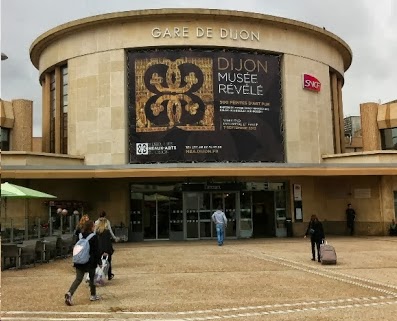 ... westwards with a big wiggle via the Hospital, the University and then on to the satellite town/suburb of Quetigny. 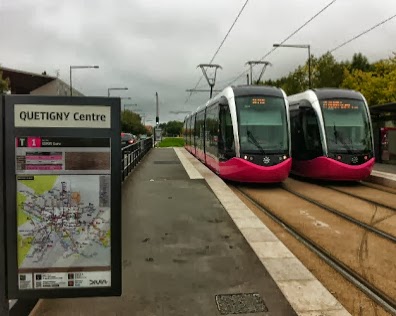 T1 is heavily used because it has Sports Parc, central hospital, University and a housing area at the end. This line had crush loadings all the way; breathing out was not an option until La Republique stop. 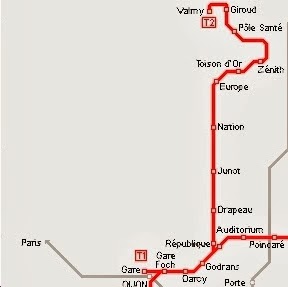 T2 to Valmy, a line also well used but not so heavily; Here there is free parking and catch the tram to town. This will mean good loadings in morning and evening peak. Valmy is a new development and is still expanding slowly. 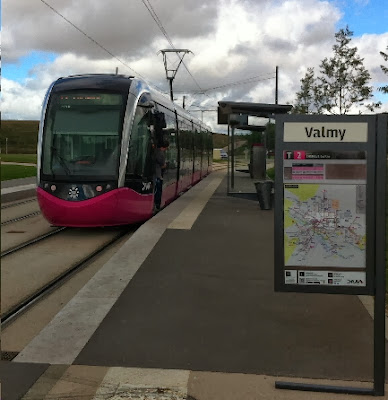 ... via the centre to Chenôve in the south. 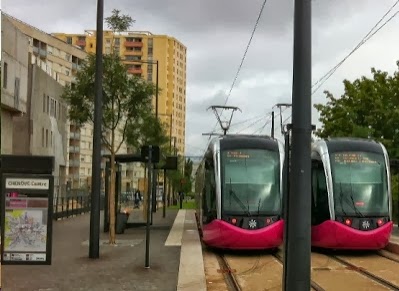 T2 to Chenôve is not so heavily used, but even so had good well filled trams. 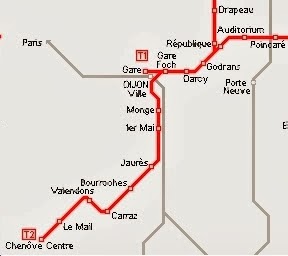 At Chenôve there is a lot of living accommodation. Blocks of flats. Some being renewed. There is also evidence of a tram not stopping here and hitting the post! See photograph of weights and temporary fence protecting the post! oops! 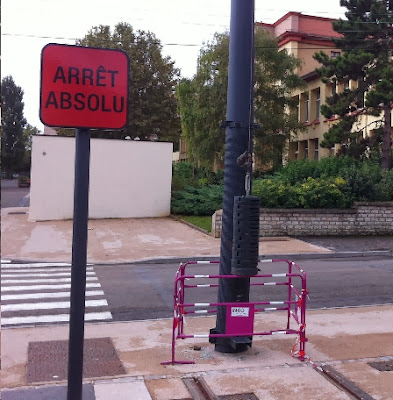 Tickets are purchased from machines at all stops ... 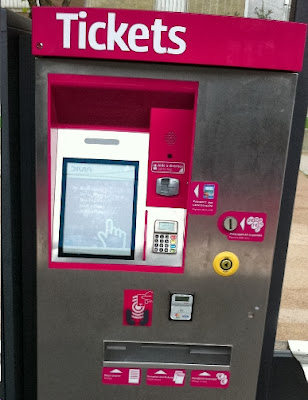 ... and trams were well equipped with information posters showing interchange with all other routes ...

... and on-screen announcements which, as you can see, were all working properly from day 1. 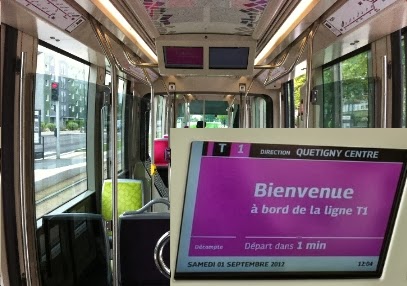 In fact, everything about this two-line system spells quality and good service. Even the grass is trimmed beautifully. 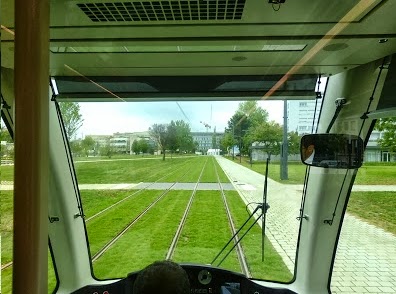 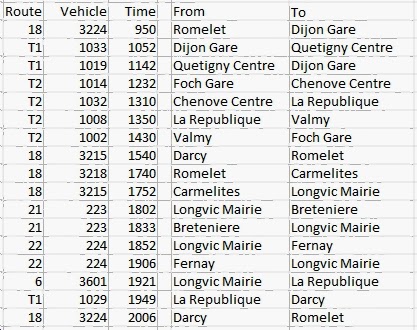 Romelet is where his big blue lorry was parked ... 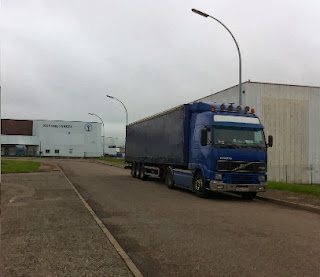 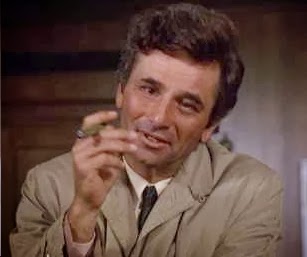 Dijon is about the same size as Reading with a town population of about 150,000; plus satellite settlements in both cases. When do we think Reading might get its first two tram routes? Or, mayhap, 102 hybrid buses all at one go?

There is more to enjoy about Dijon's system so fbb will return to this topic in a few days. 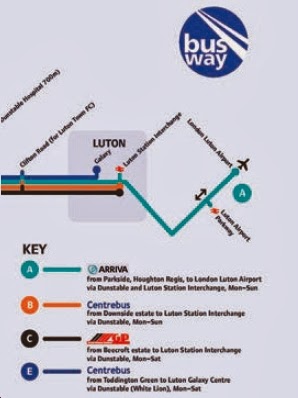 Today the chubby one is off to the Luton Dunstable busway, opened just over a week ago. There may be a few words to say about that experience!

Does our Press go too far? It would seem that politicians, vicars and public transport are (nearly) always reported in the most cynical way possible. Here is the Dorset Echo (on-line edition) ... 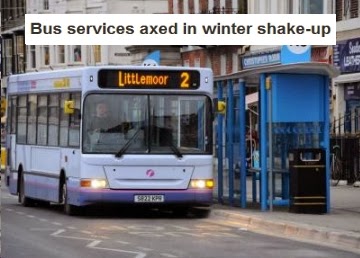 Bus passengers are facing a winter of discontent as services are axed in Weymouth and Portland. Changes are being made to local routes as the First bus company introduces a winter timetable. It includes reductions to evening buses on the most popular routes to Littlemoor and Portland and stopping services to Preston after 7pm.

"Winter of discontent" and "bus services axed" are phrases that suggest some harsh changes affecting large numbers of  Weymouth folk whose mobility will suffer horrendously as a result. In fact some evening services are being trimmed in frequency and a couple are finishing early. Commercially sensible decisions may well create some inconvenience for a few people; but that is the price we pay for political dogma past and present about how buses are funded in the UK.