This blog was inspired by our senior
Isle of Wight correspondent, Alan; with
substantial additions from fbb.
The photos are mostly Alan's. Thank you.

Creeth's ran the first bus from Nettlestone into Ryde and developed a depot there which still stands, although somewhat hidden from view (former entrances, photo, right). 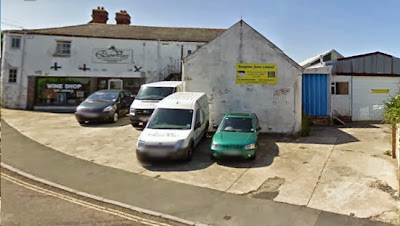 Indeed the Creeth family lived "above the shop" at a house called "Green Corner" because it was at the corner of Nettlestone Green. Clever name, eh? 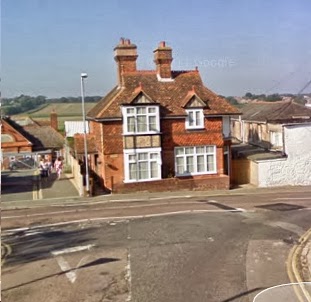 The three daughters, always the Misses Creeth, lived there until their demise all aged 90+. Careful observation reveals a door at an angle next to the right hand ground floor window. This was the entrance to the waiting room! How many of today's bus company bosses would be happy to (a) live at the entrance to their depot and (b) have passengers waiting in one of their living rooms?

Creeth's sold out to Southern Vectis and the latter took over the former's depot. 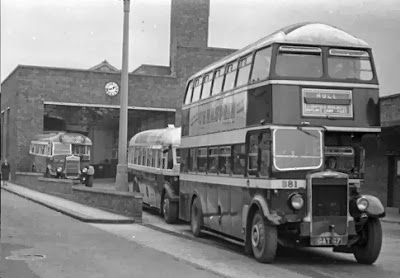 A Starkey depot at Scarborough

... was opened in 1938; but interestingly was built on a railway site. Formerly a cottage and orchard it was bought by the railway for construction of the Park Road bridge. When "real" trains replaced trams between Ryde St Johns Road and the Pier, the railway company was not permitted to have level crossings, so bridges were constructed; just south of the former terminus, at Park Road (Ryde Bus Depot) and Rink Road. 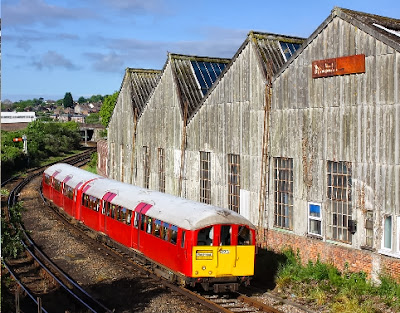 The land on which the garage was built was leased by Southern Vectis until the freehold was acquired shortly after the management buy-out in 1986. Now its owners, GoAhead, are negotiating to sell it to the Isle of Wight Bus and Coach Museum Ltd. There are a still few hurdles to be overcome but the Trustees are confident of success.


About 2 years ago, all operational activity at the depot were moved to Newport but the yard is still used as a base for some school services, now branded "Vectis Blue". 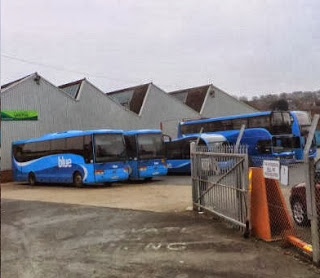 One activity that will remain, however, is chassis cleaning for which the existing bus wash unit will be used, albeit moved from its present position. The deal being negotiated also allows GoAhead to retain a large chunk of the yard. 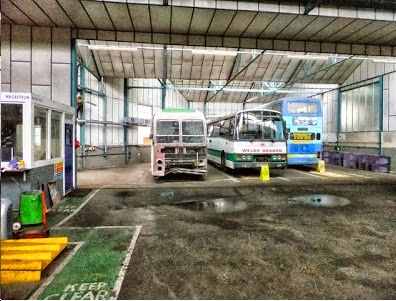 In addition to increased under-cover parking for the museum's fleet, there is a workshop area at the back ... 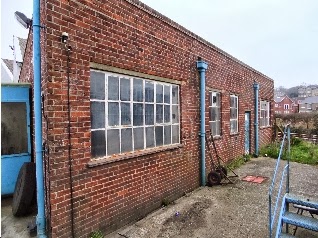 ... which can be adapted for the extensive collection of IoW bus artefacts. A real bonus is the former staff "facilites" ... 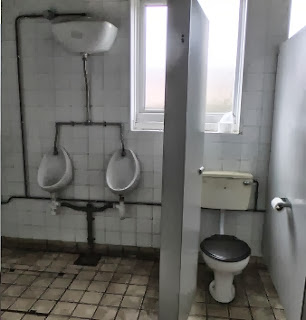 ... currently unavailable in the present museum shed. (All is not lost, however, you nip along to the Classic Boat Museum a little further along the quayside.) The staff mess-rooms will, hopefully, find a use as a refreshment room. 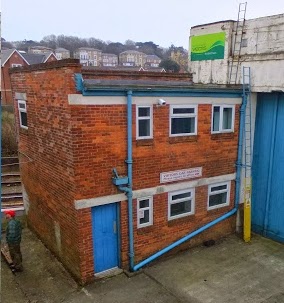 Let's hope that negotiations can be completed successfully because it will be hugely appropriate to see these superb vehicles, local and visiting, displayed in a real depot. 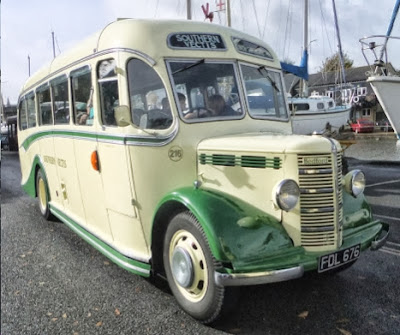 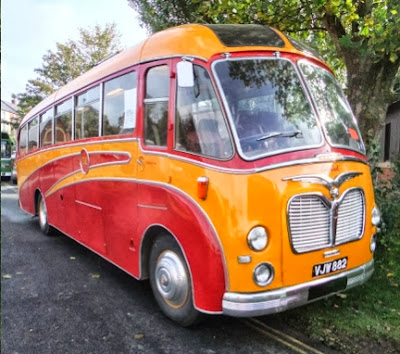 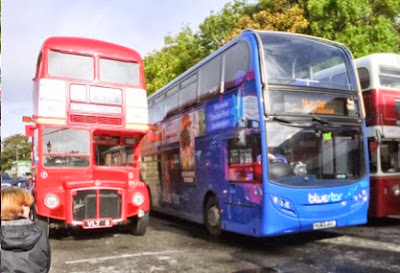 VLT 8 : the first "production" Routemaster
RM8 was the first production Routemaster to be built following the successful trials of the four prototypes. It first appeared at the Commercial Motor Show in October 1958, some months before full production commenced. It was subsequently based at Chiswick where it was used as an experimental and development vehicle. It finally entered revenue earning service in 1976 at Sidcup Garage (SP) operating on the 21, 51, 161 and 228 routes. 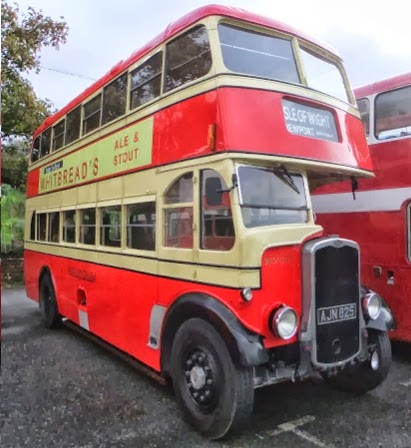 1939 Bristol K : Westcliff-on-Sea
The bus is a Bristol K5G with an Eastern Coachworks Lowbridge Body built at Lowestoft. She seats 53 people, 27 upper deck and 26 lower deck. She has a Gardner 5LW, 5 cylinder, 7 litre, 94 BHP engine and does 15-17 mpg. She has, over the period of her life, covered more than one & a quarter million miles.

The Isle of Wight Bus Museum goes into its Winter "purdah" until Spring 2014 and members and museum visitors alike are agog for confirmation of the move. The museum's web site is (here), where can be found details of how to contribute to the new depot appeal fund. This project, if successful, would lift the museum into the top rank of bus preservation and, considering the excellence of the collection of Island vehicles on display and currently in store, deserves to succeed. £100,000 has, so far, been raised.

The Museum needs to raise an amount of £150,000 in order to complete the purchase and if anyone would like to be involved in this exciting venture then any donation, no matter how large or small, would be gratefully received. It is envisaged that fund raising will take the form of outright donations, loans (with or without interest) and a share scheme. 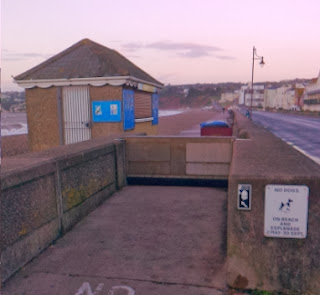 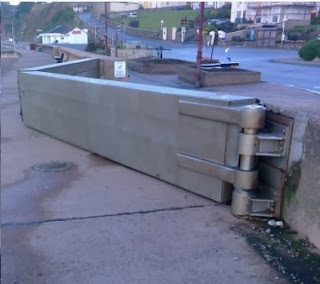 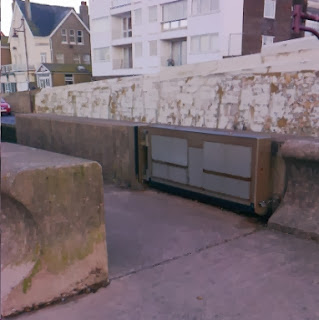 ... thus allowing a 20% chance in the Great Gale Gamble of the sea breaking through! Maybe the council "person" has lost the key?

Meanwhile the disruptive Newton Poppleford blockade will be unblockaded from today. At least it will according to the Stagecoach notice ... 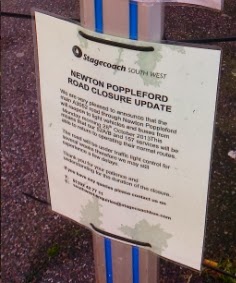 ... which fbb read while kneeling in the gutter.

Apparently, First's capitulation continues (if you want to go from Newton Poppleford to Lyme Regis, Weymouth or Poole, tough luck, you can't!) as their bedraggled diversion notice remains. 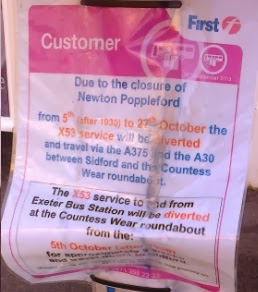