The proof of the pudding is in the eating!


The word "proof" here is the same word as used in baking; you prove or test the dough. This usage also appears in the often-mysterious phrase "the exception proves the rule". Interpreted in the criminal sense of proof, the phrase is daft; but meaning "test" it makes sense. So fbb is going to "eat" the busway and thus "test" its publicity and information provision. [lesson over; revise for homework; test (prove!) tomorrow]

First impressions were not good. 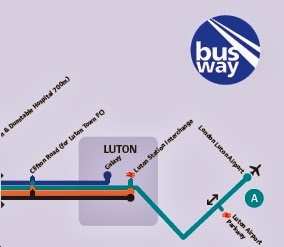 The published diagram for the Luton end was OK, but the Dunstable "simplification" was, frankly, unhelpful to a foreigner like fbb. 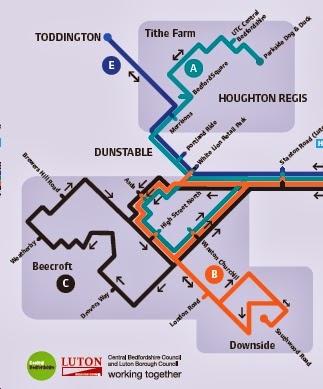 Enlarging the Dunstable "one way loop" exposes the problem of diagrams that are too, well, diagrammatic. 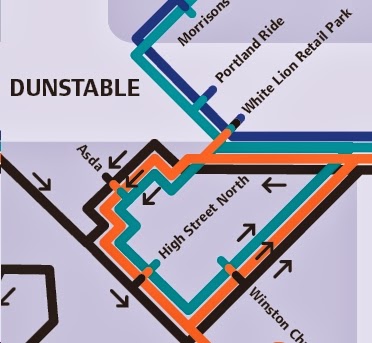 From this we may be able work out that the dark blue route doesn't serve the centre of Dunstable. Where this plan misleads horribly is at the White Lion Retail Park stop (station?). On journeys to Luton (off map right) the lighter blue route does not stop there; because it has already turned right to loop through the town centre. This has caused so much angst locally that Arriva has posted a poster warning folk that their Luton-bound buses don't call. 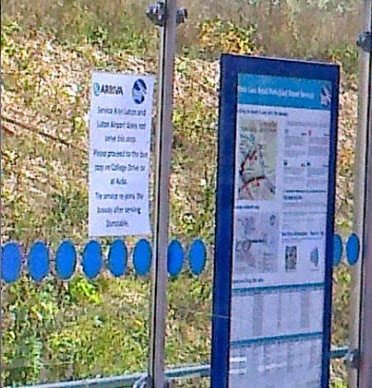 In fact the only service that stops on the 'to Luton' side of this stop is the dark blue. For Arriva "A" you have to wait at a very unimpressive non-busway pole here in College Drive, too new (?) to be on Streetview ... 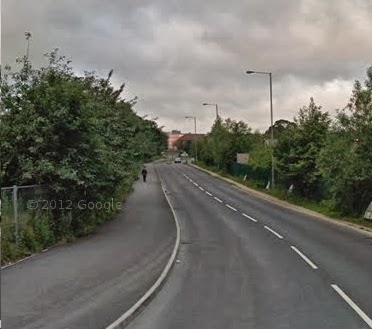 ... but roughly where the person is walking on the pic above. The busway stop is behind and to the left of the camera position. The Dunstable calling points for the black and orange routes remain a mystery as fbb's schedule did not allow a layover there.

The route map on the Arriva leaflet for service "A" (the light blue) is equally unhelpful ... 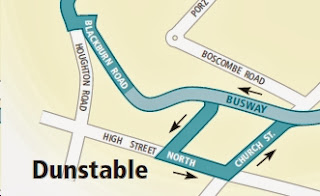 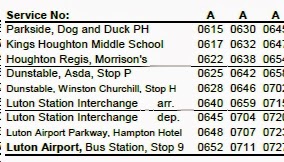 Would a line labelled "College Drive for White Lion Retail Park" be a help? But, dear reader, don't look for busway route A under "Dunstable" on Arriva's web site because it isn't there! 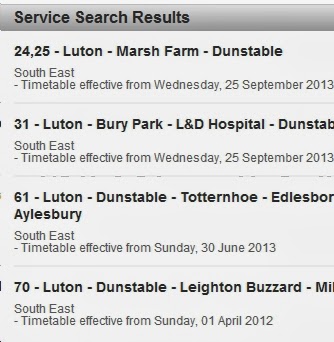 So, how are things publicity-wise at the wonderful (?) new Luton Interchange? fbb arrived by train and was guided ... ... (simplistically) to "Buses". After battling with the unstaffed but closed exit barriers, fbb was ready to be impressed.

But wasn't. The lavish facilities consist of  series of widely spaced trendily-shaped shelters and nothing else. No toilets, no enquiry office, no bus station plan, no refreshment facilities and no source of printed timetables. Indeed, for some days after opening, there was nothing at all on the shelters ... 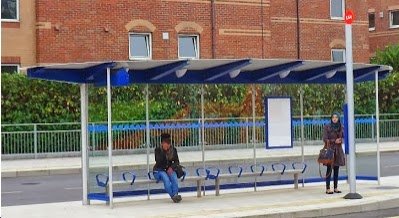 ... not even a proper "flag" to tell you what stopped where. 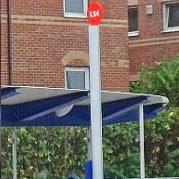 The one, not very obvious, all-services departure screen didn't know where either! 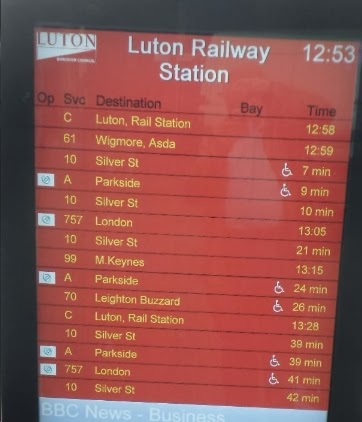 Had things improved when fbb arrived nearly two weeks later? Not a lot!

Which bus leaves from this stand? 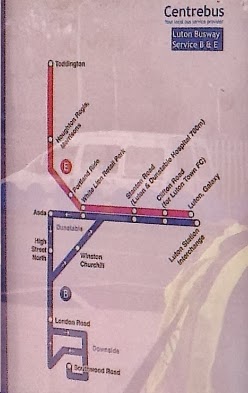 Answer, Arriva route "A" to the Airport.

And which buses leave from here? 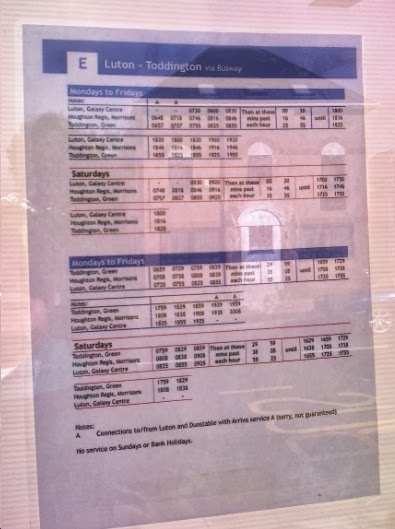 Answer: busway routes A, B and D. But the frame only admits to E which doesn't serve the interchange at all! 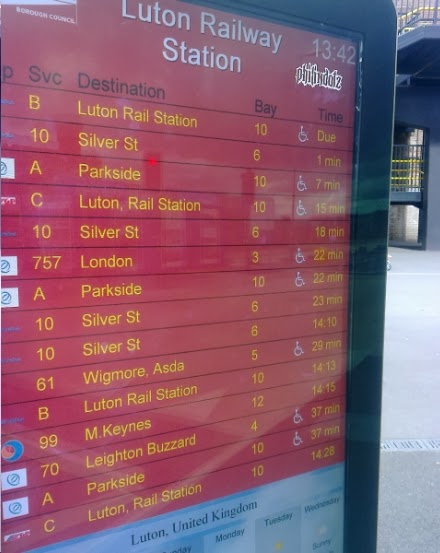 ... but were also displaying pointless data. It was good to know, on arriving at Luton Rail Station, that you could go to Bay 10 (wherever that might have been!) and catch bus B to ... 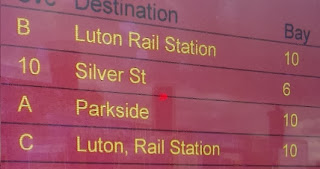 ... Luton Rail Station or even bus C to Luton (comma) Rail Station. And is the red roundel LS4 on the pole (photo above) the same  a "Bay 4" on the screen?

It is significant that fbb (who must look as if he knows what he is doing) was accosted by two locals in the few minutes he was there, both completely lost and desperately seeking their chosen service.

Is that a resurrected M Keynes, better known as J M Keynes, the eminent economist? 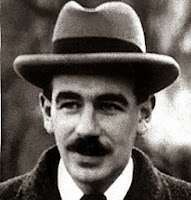 Poor marks for the interchange - next, what about the rest of the route?


Next Bus Blog : Tuesday 22nd October
Posted by fatbusbloke at 02:00