Getting You the Giggles

Not Quite What was Intended! 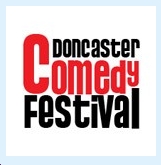 Travel South Yorkshire [TSY] is proud to be sponsoring the first Doncaster Comedy Festival. To celebrate, we are offering three lucky winners the chance to get their hands on a pair of festival passes by simply entering the free prize draw at travelsouthyorkshire.com/comedy.
"Getting you the Giggles" is the strapline of this particular on-line promotion. fbb can hardly wait! In the meantime, TSY is pretty good at its own comedic stand-up material.
Changes due at the end of this month provide a few titters as usual.

For example, TSY's computer people have trouble with their numeracy. For most of us "5" comes between "4" and "6"; but for TSY it comes ... 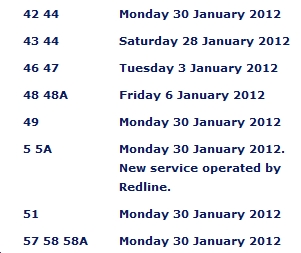 ...between "49" and "51". Why let convention get in the way of  explaining things correctly to your customers? Giggle.

Then there's a recent roadside timetable for the service to Balby. 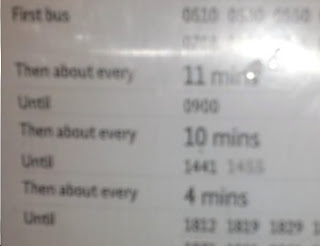 Every 11/10 minutes in the morning followed by every 4 mins in the afternoon. Really? Giggle giggle.

Then mysterious journeys at Charnock catch the eye. It may not be a new giggle; but giggle it is all the same!

Charnock is an estate at Gleadless on the south eastern edge of the Sheffield. It is served by route 51, running every 10 minutes Monday to Saturday daytime. Back in 1959 it only had a bus every hour on the "back way" service 99 to Chesterfield via Ford, delving deeper into the estate in 1966. 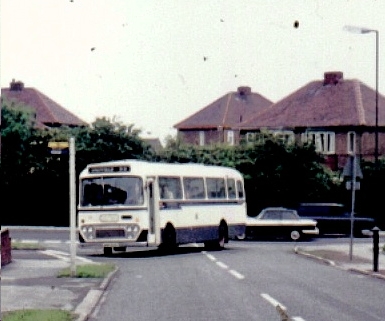 But, in compensation for a limited frequency,  you often got a nice comfy motorway coach instead of an "ordinary" bus! In 1971, the 99 reverted to its "main road route" (Now service 252 via Ford to Crystal Peaks) and Charnock got its own 20 minutes frequency 64.

When shiny trams arrived at Herdings, the 51 was duly diverted to Charnock, where it still terminates today. This map extract from Transport Defunct shows the route and the stops on the terminating "loop". 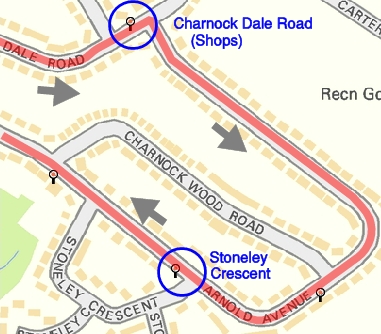 The buses wait for their departure time at Stoneley Crescent; this is the actual stop ... 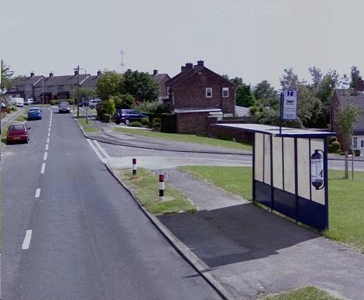 ... and as you would expect, all buses are shown there in the timetable. 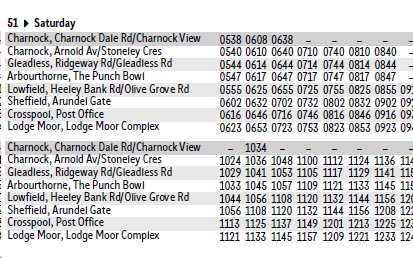 But you are well and truly "stuffed" if you try waiting at Charnock Dale Road, here, on the right near the shops ... 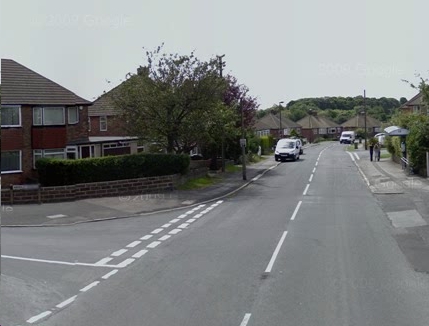 ... because most buses simply don't call there. Check the timetable above!

Good for a giggle, unless you've just missed the 1034.

Of course it's a nonsense, but TSY likes sponsoring giggles.

But, lest you should think that all is hilarious at TSY towers, fbb can report that "the lads" have actually got something right - at last. Service 4 from Rotherham, referred to in yesterday's blog (read again), is currently a guffaw rather than a giggle.

See those early morning Stagecoach journeys [SSY]? They follow a completely different route from from the First [FST] trips, don't they? And they are equally different in the evening and all day on Sundays, as well.

Giggle giggle. NO! They actually follow exactly the same route, despite a completely different set of "timing points".

But, the lads have done some pretty clever working out; someone may actually have travelled on a No. 4 bus. No, that's just a silly idea. But somehow, for the new timetable starting on Monday 30th January, both routes are the now shown in exactly the same way.

But there are plenty more sniggers, giggles and head scratching moments as TSY wrestles with its off-beat explanations of timetable changes. 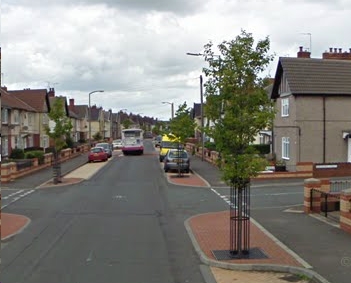 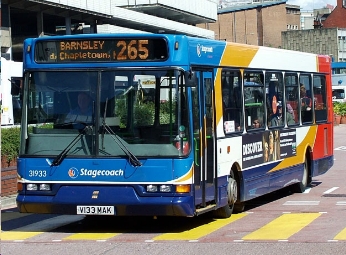 And finally, when is/was the 265 timetable change?

Blog Brother is Still Watching You


Next Blog : due Friday January 27th