or a canter to Clanfield.

The Zip 41 doesn't really run between Portsmouth and Clanfield, which is a pretty little village a mile or so off the A3. 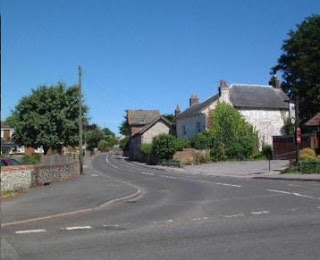 Apart from a few Monday to Friday peak hour journeys the 41 only zips to Drift Road, sometimes called "new" Clanfield ... 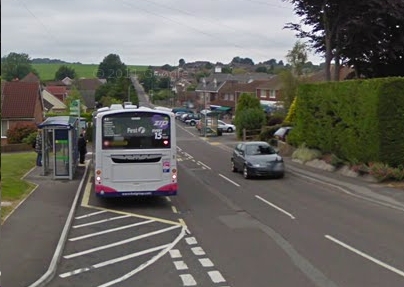 ... but more helpfully regarded as part of Horndean. Back in October 2011, First produced a splendid timetable of all its routes in the Waterlooville area and with each timetable is an excellent map which explains it all. 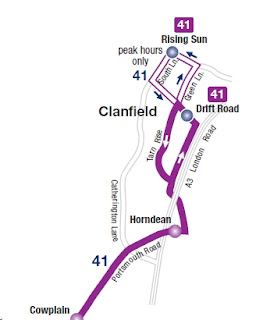 Zip starts relatively uninterestingly in Portsmouth and proceeds through suburbs to Cosham. Most folk pronounce it "Cosh-um" but a chum and local pedant insists on "Coz-ham"; the "ham" or home of a bod called Coz. Just along the coast is Bosham, most definitely pronounced "Boz-ham", so ffb'z friend haz a point. 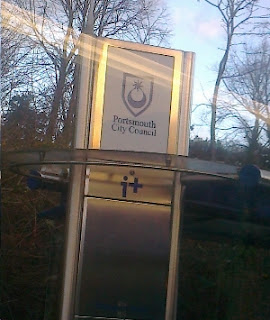 ... called "i+". It never worked; it cost millions and was unceremoniously abandoned without ever being used in anger. The route then climbs Portsdown Hill with stunning views over the City, its harbour, the Solent and over to the Isle of Wight. The centre of Waterlooville is, encouragingly, a bus only zone with lots of "Zip" branded bus stop flags ... 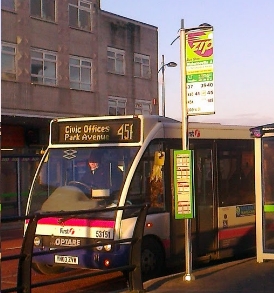 ... sadly also used for routes not upgraded to Zip standards. It makes "Zip" seem to be the name of an operator rather than a one-route brand. In a determined effort to encourage public transport use, the whole 41 route was equipped with new shelters, raised kerbs and improved information. 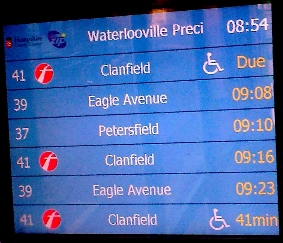 But, remember, the 41 doesn't run to Clanfield, the 39 runs to Wecock Farm and the 37 becomes a 38 and runs to Alton! Apart from that it's about right.

Significant lengths of bus lane were provided together with smart and trendy street lighting. As part of this project, the 41 was increased to a 10 minute frequency on Mondays to Fridays but very soon reverted to every 15.

Waterlooville does, however, offer a wonder rarely experienced anywhere in GB! Adjacent to a set of stops is a newsagent's shop with this ... 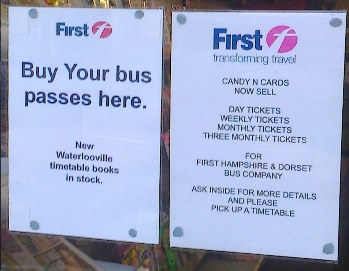 ... in the window. What an excellent idea! Using local shops as agents for the bus service. It's amazing no-one has ever though of that before. And, yes, Waterlooville timetable booklets were in stock.

Out-of-date timetable booklets with no correction!

What a pity; First Bus so nearly got it right. To be fair, only one timetable is wrong, so possibly 9 out of 10 for effort.

At the Drift Road terminus fbb had time to play with the information touch screen which offered journey planning and more information on the "Zip" scheme. But it didn't work. 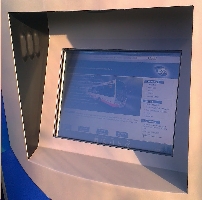 Frustrated, yet again, at the pointlessness of poking pinkies at a non working computer, fbb crossed the road to catch his next bus, the aforementioned Stagecoach 37 back south to Havant. 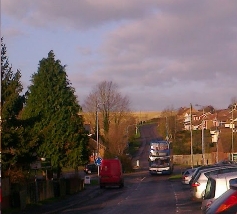 Here the bus arrives at Drift Road having come via the real Clanfield. And as we are no longer on a Zip route, our bus stop reverts to an unzipped status. Indeed so unzipped is the stop that ... 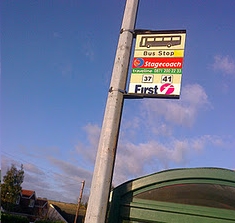 ... it tells me that the 41 stops there. But it doesn't. The X41 and the X43 do stop there but the sign doesn't say so; at least the timetable frame gets it right.

So a partly positive picture of project "Zip", which, like so many similar schemes, is now looking a little tired and in need of refreshment; a bit like fbb after his marathon Zip Trip from Portsmouth.

So it's into the newsagents for a Marathon (sorry, Snickers) before hastening to Havant; but with one mystery niggling at fbb's agile brain. 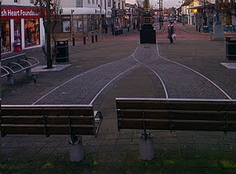 Next Blog : due Wednesday January 18th
Posted by fatbusbloke at 02:50