We begin with a Bank Holiday Sheffield  "bustermind" question.
What links Sheffield with the Howrah to Chennai Railway? (It's in India.) 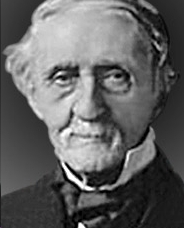 Sir Arthur Cotton (1803 to 1899) believed in the possibility of constructing a complete system of irrigation and navigation canals throughout India, and devoted the whole of a long life to the partial realization of this project, often in the face of opposition and discouragement from the Madras government.

He entered the Madras engineers, and served in the First Burmese War. After, he built dams on several rivers, transforming the drought-stricken Tanjore (now Thanjāvūr) district into the richest part of the state of Madras. He founded the Indian school of hydraulic engineering, and was knighted in 1861. His name is much honored to this day in India.
And he commissioned this bridge, ...

... the one on the left, which was ompleted in 1900.
Now decommissioned, it has 56 spans and is 2754 metres [1.7 miles] long. It was constructed with stone masonry and steel girders, and was certainly a marvel of British engineering. At that time, East Godavari and West Godavari were linked only by boat. Problems started as the population increased. To resolve these problems, Sir Arthur Cotton built a rail bridge. The rail bridge served the busy Howrah-Chennai line until its decommissioning.  The Godavari Arch Bridge was later constructed as a replacement.
But it was called Havelock Bridge.
Havelock?
Major General Sir Henry Havelock (1795 - 1857)

Just about every town in Britain has a Havelock Street, a Havelock Road, a General Havelock Inn or Arms. There are eight towns bearing the name: in Canada, USA, New Zealand, and Swaziland, and even an island in the Indian Ocean. 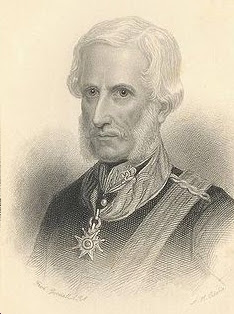 Havelock was a British hero whose fame only developed in the year of his death and reached its peak two or three years later. Today his name is remembered through place names and pictures, and the man himself is a shadow in the bloody history of the British in India. He was a hero of his time. From the perspective of the 21st Century it is difficult to comprehend the national fervour and pride which lay behind the actions of military leaders in the 19th Century. However, lack of comprehension should not result in lack of admiration for those men who put their lives on the line for what they considered a just and Christian cause: the expansion of the British Empire.

And so to Sheffield, where Havelock Street in the Broomhall district was named in honour of the good Major General Sir Henry. 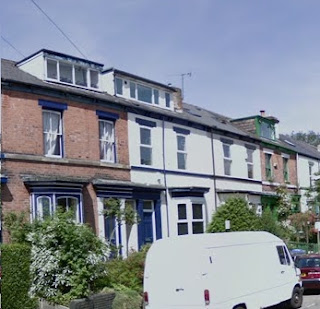 Meanwhile, the Midland Railway was completing its "direct" line between Chesterfield and Sheffield, having grasped the geological and engineering nettle by building the Bradway Tunnel. An obvious choice for a central Sheffield station site was in the marshy Sheaf Valley adjacent to Ponds Forge and Pond Street. Thus it was that the River Sheaf was "buried" from the bottom of Granville Street (culverted river seen here entering the aerial view bottom left) ... 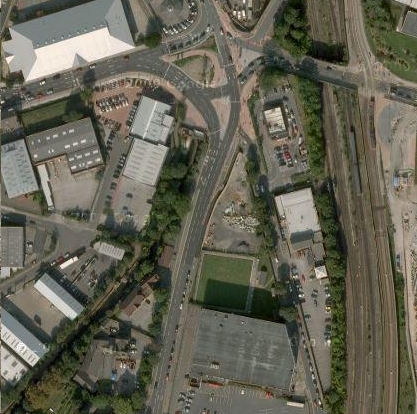 to its junction with the River Don about a mile to the north; with just one gasp of fresh air at Pond Hill, at one time the main exit from Pond Street bus station (aka Sheffield Interchange). Sheaf Street and the appurtenances of Sheffield Station are in the background. 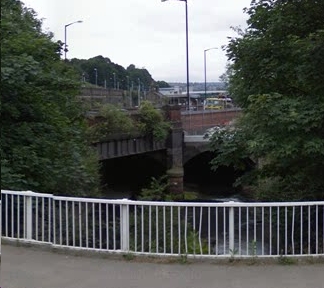 This what part of the vast culvert system looks like from within, courtsesy, not of fbb, but of the interwebnet! 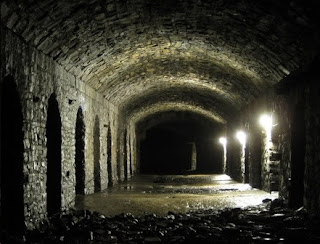 The side arches are about 8 feet tall; it's big to deal with flood surges. It's official name is the "Megatron" and this pic below shows one of the huuuuge caverns designed to absorb any sudden rush of water [see man on right!]. 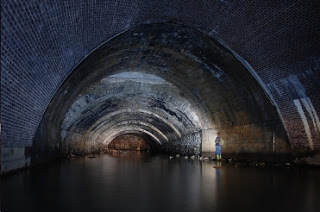 The exit is under Castlegate near its junction with Blonk Street. 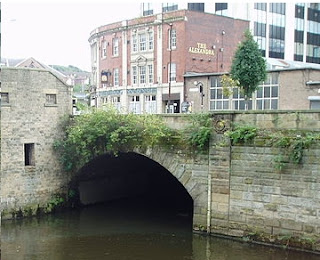 Immediately above can be seen the former headquarters building of Sheffield Transport Department and to its right the now-closed "Club", a canteen run by and for department staff. A youthful fbb enjoyed many a Saturday lunch there consisting slices of translucent meat (ill-defined), veg, "yorkshire" and gravy. This was inevitably followed by apple pie and custard all washed down with a "pot" of tea. [a "pot" = large mug]. One midweek treat was "voll-e-von" (sic!) which fbb never tried.

Back to the Midland Railway! A short distance south of the river tunnel, the railway needed to avoid the road route from the city to Gleadless and the south east.

It is here that the immensely forgettable Major General Sir Henry Havelock makes a second appeareance.

P.S. There are lots more pictures of the Sheffield Megatron on Google, (here)

Next Blog : due Tuesday January 3rd
Posted by fatbusbloke at 05:13