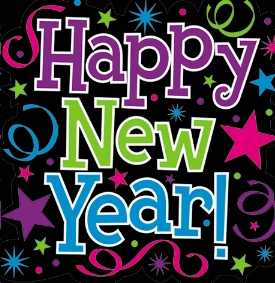 fbb has often expressed concern about incomprehensible bus publicity in the Sheffield area. It is possible that things are not that bad; it is possible that other areas promulgate poor printed publicity; but Travel South Yorkshire [TSY] does provide a telling commentary on what ought to be done to make things better. So here are some New Year Resolutions:-
We must try harder to work together. 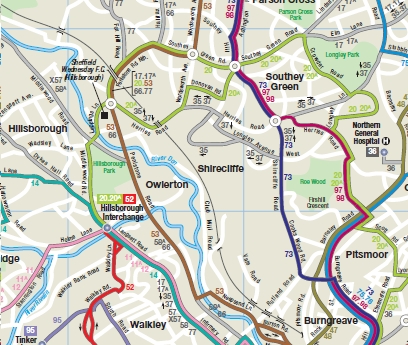 First Bus produces a Sheffield map (above); but so does Stagecoach (below). 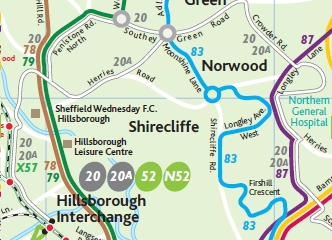 And both show a service 20/20A which are the same, although the maps look different. [The Stagecoach version is weak, geographically.] Are the two giants of the bus world in direct competition? No! Stagecoach operates tendered journeys when First deems it uneconomic. 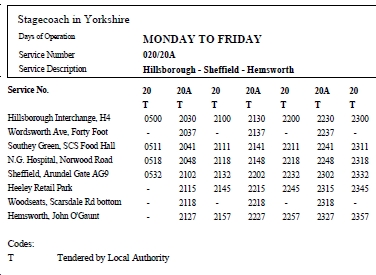 So what is achieved by two separate maps, and two different sets of timetables on company web sites. IF the two companies were actually in competition, this separation might be understandable. But they don't and it isn't.
So why not leave it all to Travel South Yorkshire [TSY]? 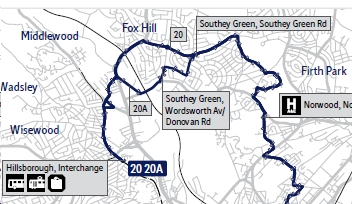 The only printed map is this rudimentary and largely unlabelled offering on the leaflet. Whilst it may be a useful aide-memoire to regular travellers, it is all-but useless for an outsider. But, on a positive note, at least TSY produces a comprehensive leaflet with both sets of times fully integrated.

But, we hear you cry, "You said that the routes were the same. They don't look the same." Indeed the Stagecoach service 20A journeys [SSY] seem to go via Southey Green twice, particularly via Donovan Road ... 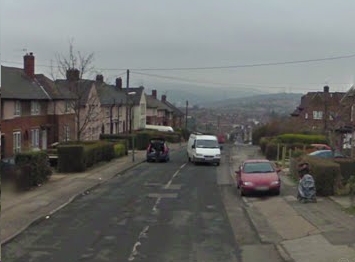 ... whereas First's buses [FST] don't appear to go that way. There are similar mysteries in the other direction! Stagecoach 20A journeys go via Scarsdale Road ... 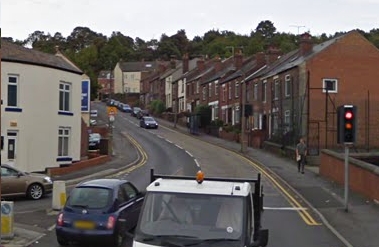 ... but First's buses don't. A nonsense, of course, but that's what the leaflet implies.
We need to get our web site right.
Still with the same service, this is what you get if you ask for route 20 in the "timetables" look-up section:- 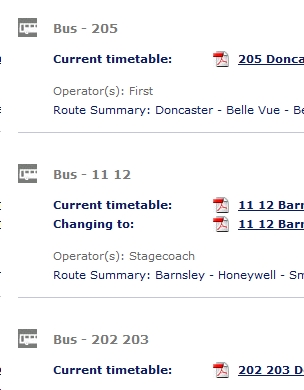 We can, just about, understand the badly programed search routines which seek out a "text string" rather than a "number", so instead of coming up with "20", the silly system supplies everything with "20" in it. But where does TSY get the 11 and 12 from?
We need use our eyes, occasionally. 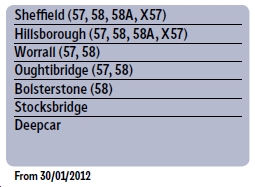 This leaflet for January 2012 has the same front cover as the previous edition. But Deepcar is in the wrong place! It should be between Oughtibridge and Bolstestone. Even that is not the best solution. The implication is that all service 58s run via Bolsterstone. WRONG!

There is one journey on Mondays to Fridays from Bolsterstone to Sheffield and two return trips; nothing on Saturday or Sunday. Misleading; you bet! And because the list of locations is in the wrong order, other mistakes follow. The entry on the list of revised timetables for 30th January is this ...

... apparent withdrawal of all buses to Stocksbridge. A nonsense, of course, but it should not be so!

And someone must have told Traveline to put these destinations in the wrong order.

It should, of course, read "Woodhouse - Sheffield" etc.

And linking services 20 and the 57 group, take a look at the X57 timetable. Once again, Stagecoach buses appear to follow a different route from those operated by First Bus.

Not so! Manchester Road Hunshelf Road ... 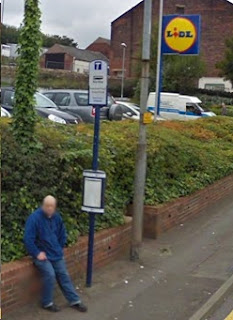 ... is just one stop away from the Co-op, just a few yards further along Manchester Road. 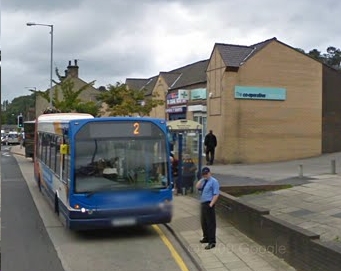 Why the difference? fbb knows the answer. TSY blindly imports information from the bus operators and simply regurgitates it electronically. There may be a reason why Stagecoach buses are timed at a stop a few yards down the road from First's. Probably not. Those who don't look don't see. So a final New Year Resolution for all SYPTE staff. To improve publicity and reduce mistakes ...
We must get out more and SEE what happens.


Next Blog : due Monday January 2nd