fbb has a confession to make. Despite his bus ride to Axminster, this visit to Devon did not include an exploration of the Lyme Regis branch line. Fbb and Mrs fbb are on holiday car-free and carefree; which means diversions via the route of the long closed railway are impossible. However a motorised investigation did take place a couple of years ago. 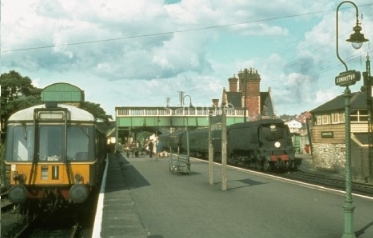 Looking towards London (east), a "spam can" (Battle of Britan or Merchant Navy Class") simmers in Axminster station in summer 1965 with a diesel car waiting to convey the few passengers off along the branch. 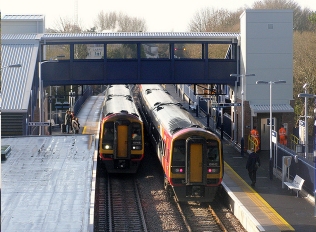 The same station today (looking west) with the new hourly service trains crossing via the re-instated passing loop. Doesn't the new footbridge look ugly compared with the old?
Note the operational oddity. The train on the left is on the traditional down platform (away from London) but is actually travelling TO London; N.B. WHITE headlights. The train on the right, on the traditional TO London platform will set off for Exeter, travelling DOWN; the tail lights are ON, showing RED.
Why this oddity? Alan Williams, the great signalling expert in the "Moderrn Railways" magazine, did explain it all, but fbb has forgotten. Something to do with signal sighting and stopping distrances; or perhaps the engineers did a left for right transpose on their CAD computer program?

The branch to Lyme Regis had opened in 1903. 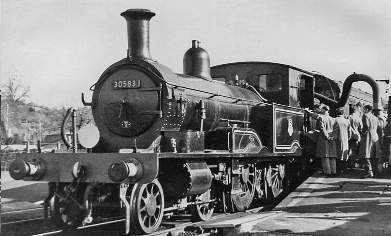 Before such interlopers as diesels arrived, the line had been worked a permutation of three Adams "radial" 4-4-2 tanks, latterly "one engine in steam". First locos in the class were built at the end of the 19th Century and they should have all been scrapped by 1930. But the corners, the hills and the weight restrictions on the line meant that they hung on until the early 60s.

For the technically minded "radial" refers to the two wheel back axle which would, on most engines,be part of the rigid chassis. In the case of the Adams locos, this was a two-wheel pivoted bogie. So the locos were good for sharp corners.
O.K.? Now, here is a picture of a pleasant country cottage. 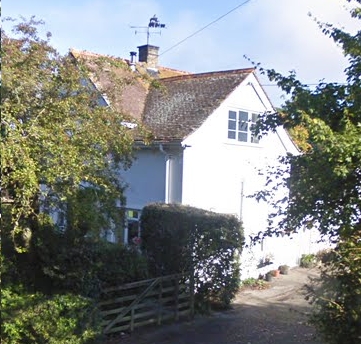 'Tis actually the former station at Combpyne, the one intermediate stop. 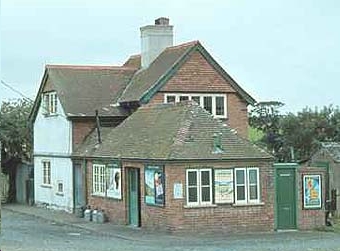 And this is what it looked like when the station was open. Combpyne was what you might call a "basic" station. 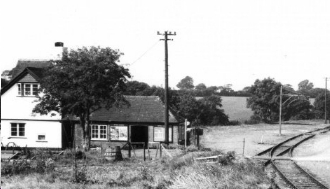 From the rudimentary ticket office, the prospective crowds (?) would walk across the sidings to the simple platform. 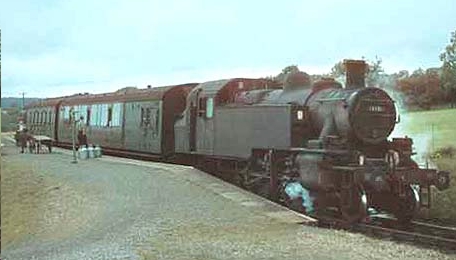 That was it! No platform lights, no seats, no shelter, nowt! The cans on the platform brought water for the station house etc. as the well (!) often ran dry. Mind you, although the station was named Combpyne, the small village was some distance away. Not only that, it was along a very narrow road, Lidyates Lane ... 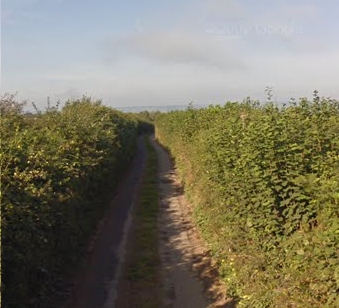 ... with grass growing up the middle! Custom was not great; surprise, surprise.

Then the station at Lyme Regis ... 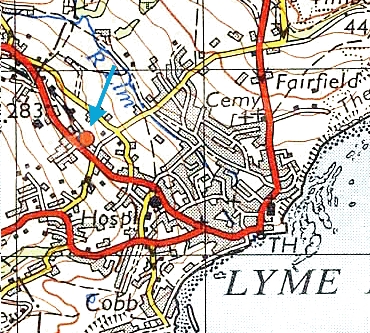 ... was about a mile from the town centre and up a very steep hill. The facilities were never lavish ... 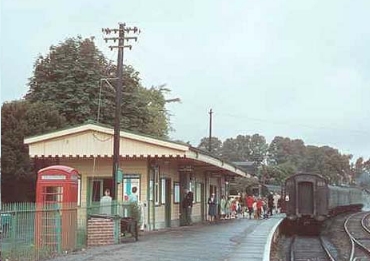 ... and it seems unlikely that the line was EVER profitable. Nevertheless it remained a huge, huge favourite with railway enthusiasts who were, to a man, distraught when it was destroyed by "The Good Doctor" Beeching. 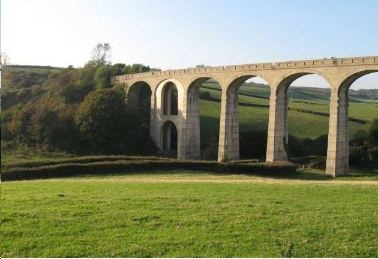 It was the first such structure in England to be constructed of concrete as a follow-up to the work of "Concrete Bob" McAlpine in Scotland. As construction proceeded one section started sinking and needed the distinctive double-arch repair job. Despite this potential frailty, 46 years after the line closed, the monument to Edwardian engineering still there, weirdly joining nothing to nothing and spanning a secluded valley. 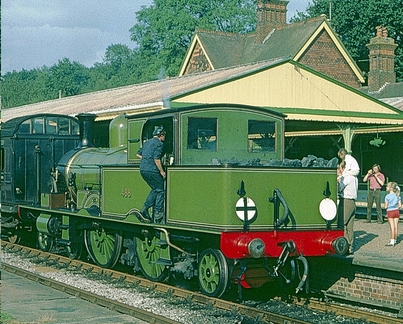 One radial tank is preserved in working order on the Bluebell railway and ... 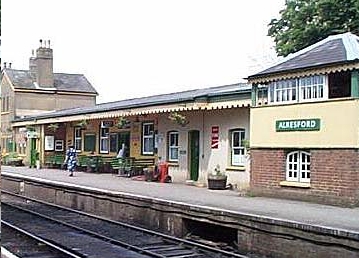 ... Lyme Regis station building was rebuilt at Alresford, Hampshire, on the Watercress Line. But not much else. 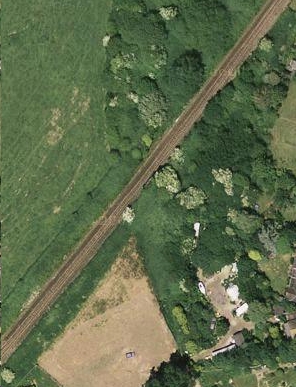 The edge of the trees (top) and the boundary of the light coloured field are all that remain of the exit from Axminster which crossed over the main line to the west of the station. But at Lyme Regis ... 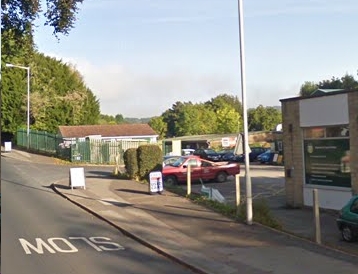 ... only an expert would recognise the former station and goods yard.

The present bus service runs every hour at clock-face intervals.  The bus takes 20 minutes, runs from centre to centre and connects with an hourly train service to London and Exeter. Frankly, it's MUCH better than the branch line ever was.

All the link lacks is simple through ticketing. Thanks to the turgid systems and hide-bound over-engineered administration on the railways, combined with short-sighted management all-round, this simple encouragement to travel seems a long way off.

Time to get it sorted!

AN UPDATE : fbb says that these are not promoted; and they aren't! But, deep in the bowels of Southwest Trains web site,  as the chum who proffered this correction says, "You would have to know that they were there." So not promoted, then. Click (here) to find other bus links to towns without "trains staions" (sic!).

A pagan symbol of life, (ever green, hope through the winter, rebirth in spring), first brought to England by George III's Queen Charlotte of Mecklenburg-Strelitz in the early 19th Century. The tradition was popularised by Victoria's Price Albert, but NOT instigated by him. Although NOT a Christian symbol in any way, a similar message is to be found in the Bible; part of a "poetic" description of Heaven.

On each side of the river stands the tree of life which bears fruit twelve times each year, and its leaves are for the healing of the nations.

Next Blog : due Friday December 2nd