Battling with Bits and Bytes 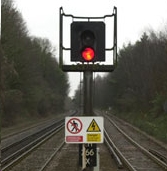 fbb phoned his chum, Alan, to confirm "taxi" arrangments for the return journey (Saturday 3rd December) from Sidmouth. "You might be diverted via Chandler's Ford," he opined enigmatically. Apparently, every weekend, "the lads" are gluing the track back together between Romsey and Southampton ... 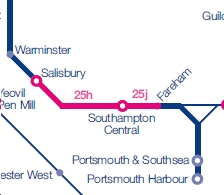 ... with consequent diversion of fbb's train. "At least, diversions have been in place for a couple of months, so best to check", he concluded. 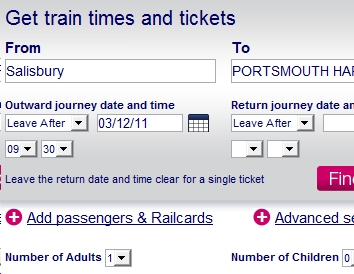 ... which revealed that "no tickets are available" and flatly refused to deliver anything else. Great! 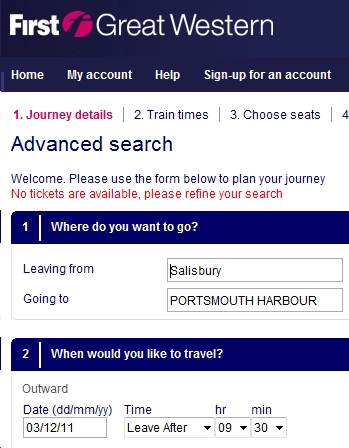 It's all going ever so well, isn't it? After some diligent peering at over-complex screens, the site offered a "summary" of disruption and engineering works.

Bingo! Well, a somewhat muted bingo. Chum Alan's warning turned out to be true. So will this almost-hidden diversion via Chandler's Ford and Eastleigh affect fbb's times, thus meaning a change in kind chum's lift service?

Try another site : National Rail
More clutter; more bits of advertising but it has got a nice clock ...

... and, unlike First Great Western (FGW), fbb could find, and work, the journey planner. Again, you have to do a bit of clicking; the description of the diversion was partly hidden and wouldn't come to the front; but it confirmed the somewhat shaky service information from FGW. 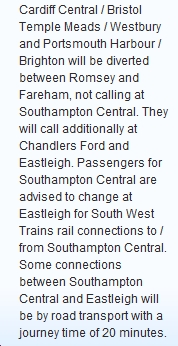 This rather crude diagram from FGW's web site sort of explains what was happening.

Trains were following the pale blue line over Southwest Trains Romsey to Eastleigh and Eastleigh to Fareham route.

But, good news, and if you look very carefully, the journey planner allows you to look at intermediate times ... 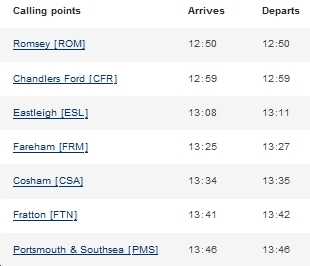 ... thus confirming the whole thing, including arrival time at Portsmouth Harbour, unchanged despite the re-routeing.

But there was one small bonus from the frustration of foraging for the facts about the diversion. fbb had never, previously, travelled to or via Chandler's Ford station so it was, most emphatically, a "cop". ["cop" : word used by elderly ferroequinologists to signify a train seen for the first time or a journey made for the first time.]

The station was opened by the London and South Western Railway in 1847 and is pictured here in 1920. 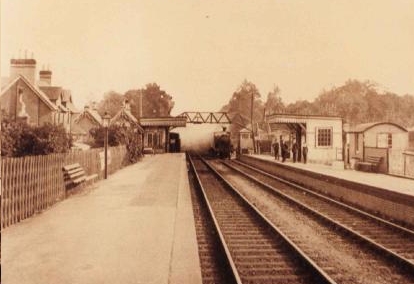 Passenger services were withdrawn in May 1969. With significant funding from Hampshire County Council, Chandler's Ford was reopened for passenger traffic on 18 May 2003, 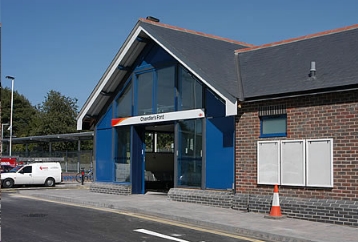 although the new station building was not completed until later in the year. It was officially opened on 19 October 2003 by the television gardening presenter Charlie Dimmock**, who lives in the area. The station originally had two platforms, but only one has been in use since the reopening, as the line is now single-track.

Initially, custom for the re-opened station was less than expected  and there was even talk of re-closing the station and withdrawing the Southampton, Chandler's Ford and Romsey service completely. Such gossip has now faded away.

Please, please, PLEASE : why is it so hard to unearth important information from railway web sites? Isn't it about time (groan; "about time", as in timetables: gettit?) they cleared out the clutter and make it simple?

Although finding the information was a struggle, the actual journey was trouble free, efficient and utterly on time all the way. Railway travel at its very best. 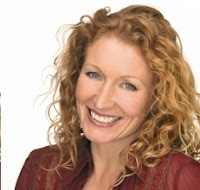 ... is an English gardening expert and TV presenter. She was one of the team on Ground Force, a BBC gardening makeover programme. She is a former pupil of Wellow Primary School and The Mountbatten School in Romsey, Hampshire. When she was at school Charlie wanted to be a Forensic Scientist. 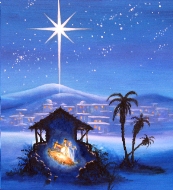 The wise men were on a later schedule in the Christmas story, but they would have seen "the star" weeks, if not months, before they set off. A great deal of debate has ensued about what the star was. A supernova, a conjunction of planets, the planet Venus or a hitherto undiscovered comet?

But, surely, this misses the point completely. The incarnation (birth of Jesus) is recorded as a "supernatural" event. The word "God" can be defined as:- a sentient "being" outside of space and times and beyond any physical limitations of mere mortals. A "God" can, by definition, quite easily "create" a star, whenever and wherever he wants, because, as the advert says, that's what it says on the tin; because he IS God. He can, by definition, overrule any laws of physics that limit us.

Of course, if you are one who can't, don't or won't believe; or even accept the possibility of belief, then the star might be a problem.

Next Blog : due Thursday December 8th