Pop over to Poppleford

Re Wednesday's blog (read again) and the disappearance of
Seward's service 688, a comment from Ken Traveline-Dorset.
(What an appropriate surname?)
Wrong line working at Axminster is to allow trains approaching at line speed to have a straight run in to the platforms, then leaving from stationary they have a slower run out over the curves. I will investigate service 688 missing from Traveline. This service is a Dorset tender which passed to Damory Coaches and is subcontracted to Dorset Community Transport (the ECT offshoot) but should still be Devon's responsibility on Traveline (Westernmost county defines ownership). I may well declare UDI and take it over!!
Thanks Ken T-D! This is the timetable for the 688
from the Dorset timetable book.
No longer a circular but still Thursdays only.

Today's blog:-
Dateline : Tuesday 29th November
fbb has previously blogged on a trip from Sidmouth by bus along the route of the railway branch from Sidmouth junction, now called Feniton. See "A Potter to the Otter" (read again). At Tipton St John, there was a branch from the branch which ran via Newton Poppleford to Exmouth. 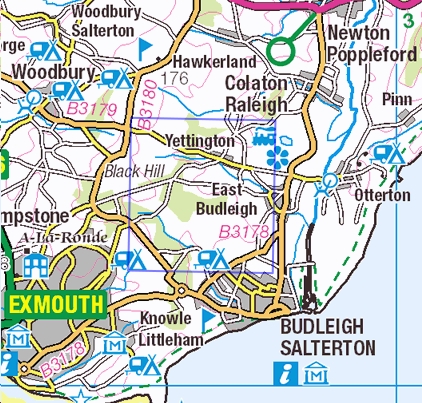 On Tuesday 29th November the Devonshire monsoons broke out, so fbb and Mrs fbb decided to risk a trip to Exeter. A simple ride on the 52A took them to the delights of Exeter bus station. 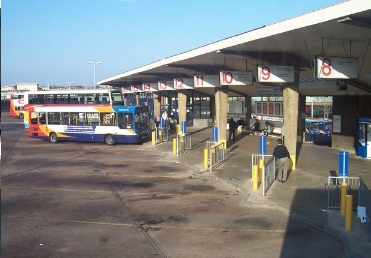 The building is somewhat "tired", those large stand labels have gone but there is still a well-staffed enquiry office, a good caff and an enclosed waiting room. 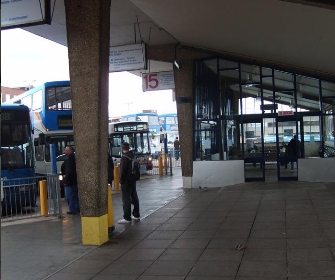 But the delights of Exeter in a downpour were less than memorable, so the travelling twosome decided to return to Sidmouth via the long way round and service 157. Stage one was the 15 minute frequency route 57 which took them, uninterestingly, to Exmouth. 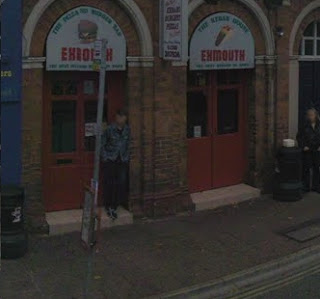 Congrats to Devon County Council for replacing this boring bus stop on Rolle Street, Exmouth, with a new wider pavement and a superb waiting shelter. Unfortunately the design ensured that the shelter behaved like a rain-soaked wind tunnel, so back to the drawing board, folks. 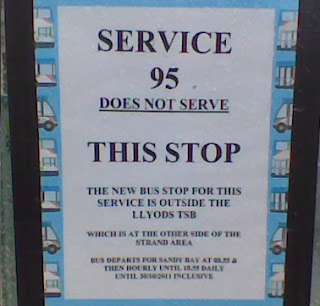 And, happily, misprunts are still available to amuse us, as here in the Rolle Street wet room. LLYODS TSB, indeed!
The former branch to Tipton St John left Exmouth on a curving line that is now Marine Way ... 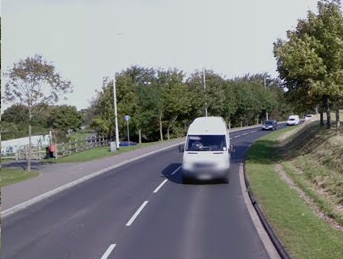 ... with the existing Exmouth branch line just off to the left.


The first station was at Littleham and nothing recognisable remains. The line ran to alongside the buildings on the left ... 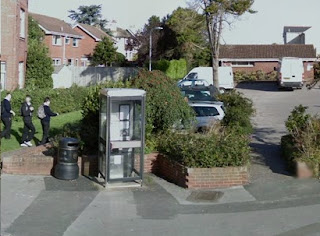 ... with the photgrapher standing roughly where a level crossing was. 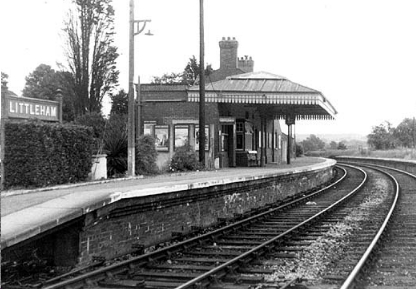 Bus 157 calls at Littleham crossroads, only a few yards from the former station. Likewise, as the bus route does its little bumble round the back ways of Budleigh Salterton, it passes the site of the station there. 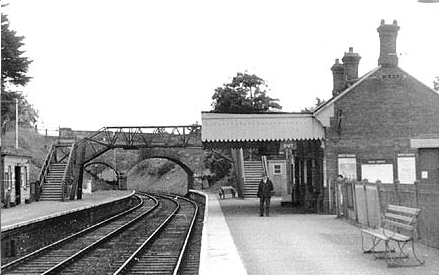 The bridge is on Leas Road as we look to the east, and a present-day glimpse from the bridge looking west shows that housing has obliterated the site of the station. 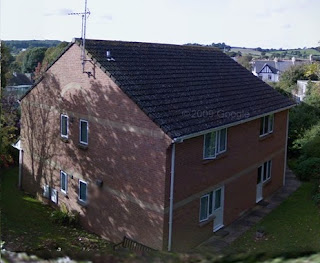 The former cutting alongside Upper Stoneborough Lane is there, used as a walkway but now full of trees and difficult to spot. 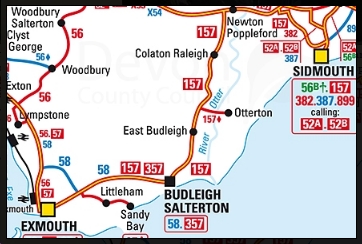 The 157 next crosses the line (and the River Otter) at Otterton ... 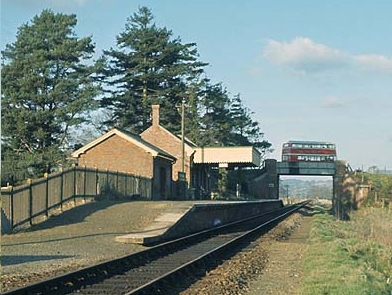 ... where the station was confusingly called East Budleigh. The line closed to passenger traffic in March 1967, but this little station has survived, complete with platform and awning, as a private residence. Due to an excess of foliage all-round, the best view is from the air. 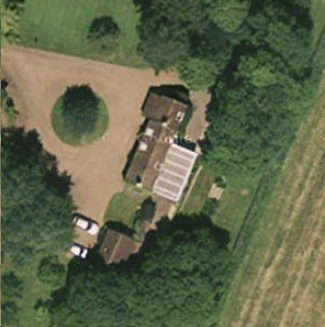 Like the Devon General double decker in the picture above, our bus continues to Otterton village where it performs a tight reverse turn into a little lane at the end of Otterton Street.

A "Buses reversing" sign and "Keep Clear" on the road are augmented by a small white plate on a pole on the left reminding locals that Stagecoach buses turn here. It was quite exciting! 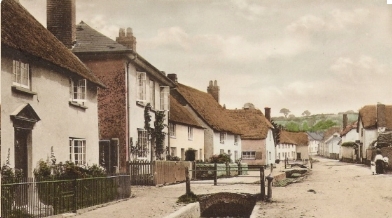 And so it is back through Otterton and on Via Colaton Raleigh (yes "he" came from round here) to Newton Poppleford ... 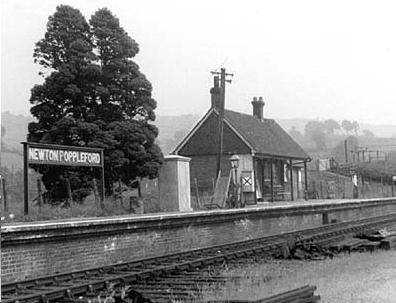 ... where there is noting left at all of the line or station, just bare earth as here viewed from Back Lane. 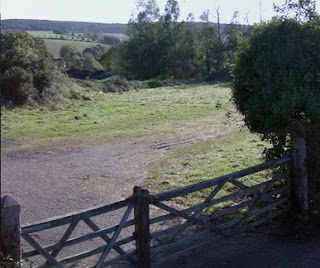 So, the visible remnants of yet another branch line sink into obscurity, slowly disappearing from the map.

The "alternative" 157 bus runs every hour with subsidy from Devon Council. On fbb's trip it was hardly busy. Does a sparsely used bus every hour, which is a much better than service than the railway EVER provided, have a chance of survival? Kept alive by old fogeys with free passes at the moment, one has to wonder whether it has a commercial or even a political future.

We are all busy with the Christmas post; cards and parcels to "get away". 2011 is the first year that our Christmas stamps have actually admitted that CHRISTmas is a festival soundly grounded in the words of The Bible. The texts which summarise the nativity narrative are actually printed on most versions of the stamps. [click on the picture for a larger view.]

However our blog readers may choose to celebrate, whatever beliefs or attitudes they may have, it is right and proper that the underlying reason for the season is promoted. Some may be celebrating nothing more than celebration (??!!); but fbb will be remembering the birthday of the Saviour of the World. This is how the text from the "small" 2nd Class stamp reads-
She will have a son, and you will name him Jesus because he will save his people from their sins.

Matthew Chapter 1 verse 21.
These were the very first GB Christmas stamps, issued in 1966. 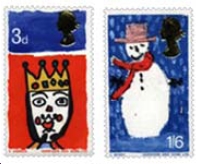 Next Blog : due Saturday December 3rd
Posted by fatbusbloke at 07:25