A Bishop and the Background


The Rt Revd Arthur Harold Morris [20 February 1898–15 October 1977] was an eminent Anglican Bishop in third quarter of the 20th century. Morris was educated at Fitzwilliam College, Cambridge and ordained in 1923. He held incumbencies at Great Clacton and St Mark’s, Hamilton Terrace, was then Rural Dean of St Marylebone before wartime service as a Chaplain with the RAF. When peace returned he was Archdeacon of Halifax before his elevation to the Episcopate as the third Bishop of Pontefract with the additional title of Archdeacon of the area. Translated to Bishop of St Edmundsbury and Ipswich in 1954, Morris retired in 1965.

fbb has never really had much to do with bishops; but, as a callow youth of 16, he was invited to attend a weekend "do" organised by the Bishop of St Edmundsbury and Ipswich (as above) and his side-kick, the Bishop of Dunwich. The latter suffers from the sadness that most of his See is under the sea; see what's left of the once thriving port, destroyed by the advancing waves from 1280 onwards:- 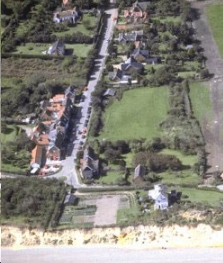 Anyway, a highlight of this conference was meeting both episcopal eminences on a college landing in their pyjamas! (The bishops were in pyjamas, not the college landing.) A naive and immature fbb had never considered the possibility that bishops wore PJs and did not sleep in their posh hats!

That's the closest fbb has even been to St Edmundsbury aka Bury St Edmunds. So when the news broke (in late October) about significant bus competition in that Suffolk town, the chubby one needed to do some research. 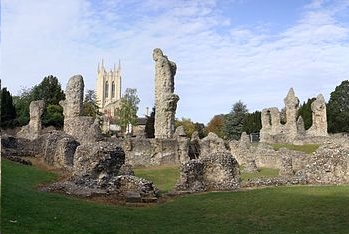 By 1327, the Bury St Edmunds Abbey owned all of West Suffolk. The Abbey (built in the 10th and 11th centuries) held the gates of the town; they held wardships of all orphans, whose income went to the Abbot until the orphan reached maturity; they pressed their rights of corvée (that's a euphemism for legalised slavery!). In the late 12th century, the Abbot Adam Samson forced the Dean Herbert to destroy the new windmill he had built without permission. Adam said: "By the face of God! I will never eat bread until that building is destroyed!" The town of Bury St Edmunds was designed by the monks in a grid pattern. The monks charged tariffs on every economic activity, including the collecting of horse droppings in the streets. The Abbey even ran the Royal Mint.

The martyrdom of St Edmund in the year c869 gave the Borough (aka "Bury") its name. It's more recent church of St James was elevated to cathedral status ... 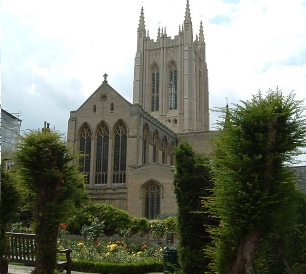 ... with a gothic revival tower completed as recently at 2005. Well, a cathedral has got to be posh, hasn't it?

St Andrews Street links the railway station in the north ... 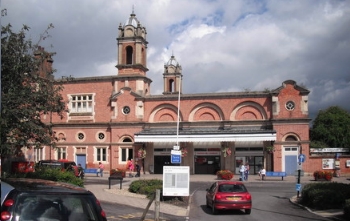 ... with a nice bus station served my the majority of routes ... 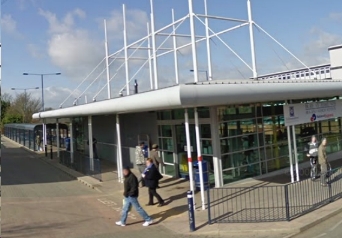 ... and continues south the the main shopping area ... 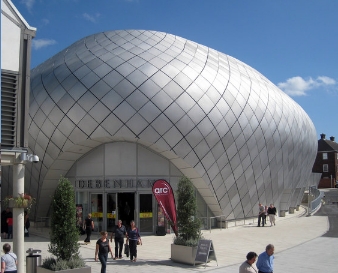 ... dominated by the spectacular "arc" arcade.

A particular piece of transport trivia concerns this:- 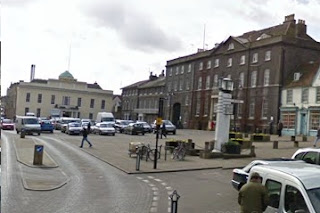 "Pillar of Salt" is the colloquial name of a Grade II listed road sign on Angel Hill. Listed in 1998, it is described as being 'individual and probably unique'. 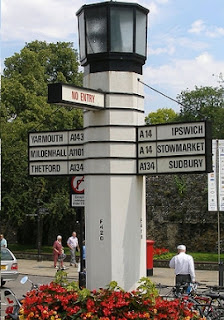 According to the plaque set at the foot of the sign, it is thought to be the first internally illuminated road sign in the country. Designed by Basil Oliver, architect to Bury St. Edmunds Town Council in 1935, it had to be granted special permission to remain in place because the font and size of the letters and numbers did not conform to regulations.

The network of town bus routes has been in the hands of First and its predecessors fort some time, and it is here that the bus war has "erupted". This is a simplified map showing the main areas covered by the "traditional" network:- 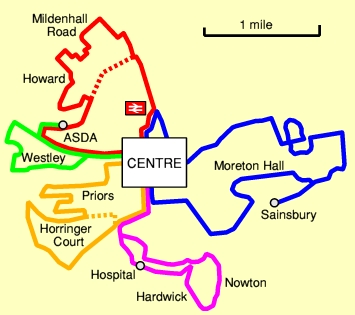 Competitive services operate on all sections except Moreton Hall. So, next, we take a look at the present set-up in a little more detail and examine how the competitors compare. For the pedantic, Mildenhall Road is the road leading north(ish) to Mildenhall but local convention also uses the same name for the housing estate leading off that thoroughfare. Father Christmas
Now there's a character, if ever there was one. Dressed in his long green cloak and with a head-dress of holly, the character must have had a really good time rushing around encouraging everyone to "party on". He first appears in carols in the 14th Century as "Lord Christmas", then he rises to fame in the 17th Century as a satirically jolly figure opposing the Puritans' banning of seasonal festivities. He fades away until he is revived in the 19th Century by which time he has changed into a red cloak and lost his prickly hat.

One thing is for sure: he had noting to do with children, with presents or with reindeer. And by the 19th Century he had lost whatever tenuous connection with the CHRISTmas story he might have once had. And he didn't live at the north pole. He probably goes back to pagan times (green new life, again) and includes a bit of Saturnalia's "Lord of Misrule", an agent of bad behaviour and excess merry making. [Saturnalia : a pagan mixture of booze-up, fancy dress party and the spirit of "Candid Camera"]

But he was probably famed for his utterly irritating "ho ho ho" catchphrase and jovial jocularity from a very early date.

It is only in the 20th century that popular culture merges him with Saint Nicholas and produces a Father Christmas Santa Claus concatenation. The two separate popular heroes of the season, with no links between them and very little to do with the birth of Jesus, then become one central mixed-up and meaningless character of the secular festival.
Jesus said "I have come in order that you might have life, life in all its fulness."

Next Blog : due Sunday December 10th
Posted by fatbusbloke at 03:37