As excitedly hoped-for, fbb opened his gift from No. 3 son and it was indeed a mobile phone that takes pictures; one like this in fact::- 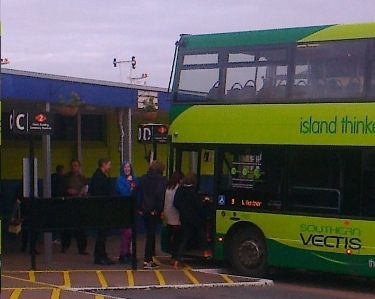 For blog that refers (read again)
---------------------------------------------------------------------------------
Resident in the fbb home were all three (adult) sons, one daughter-in-law and two excited grandchildren. And what was the technological highlight of this festive weekend? Latest downloads on the Blackberry? 3D movies beamed direct into their brain cells? The Christmas Dr Who episode? No, the big excitement was playing Chuckie Egg?
Chuckie Egg?
A&F Software's Chuckie Egg is a home computer video game released in 1983. The original idea is generally attributed to the then 16 or 17 year old Nigel Alderton. After a month or two of development, Nigel took a pre-release version of his Spectrum code to the two year old software company A&F, co-founded by Mike Fitzgerald (the F in A&F) and Doug Anderson (the A in A&F). Doug took on the simultaneous development of the BBC Micro version. Chuckie Egg went on to sell over a million copies and remained a steady earner for A&F, who eventually went under in the latter half of the 1980s. 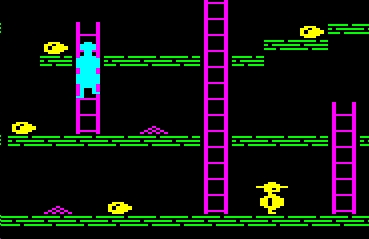 It is what is called a "platform" game, whereby the farmer (with the hat, bottom right) collects eggs (yellow blobs). Oddly this involves complicated tours of ladders and platforms with the ever-present possibility of crashing to an ignominious death. A further danger is provided by blue flamingoes which are searching the same platforms for piles of purple bird seed. As everyone knows, colliding with a flamingo means instant extermination! 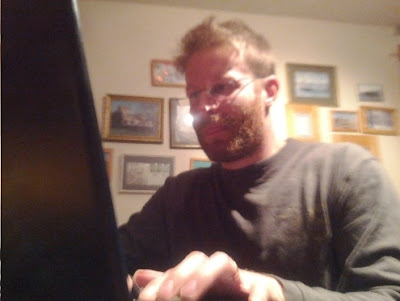 So here is No. 1 son, aged 36, leading the family Christmas Eve Chuckie Egg league; a position which he also held 25 years ago when the game was in the forefront of the white heat of technology. fbb's elder grandson has been introduced to this game and his skill is developing steadily.
There is something very surreal in watching your three "little boys" revert seamlessly to their earlier childhood selves, complete with screams of frustration and air-punching bravado as they move to the next exciting level of the 28-year-old game (?).
What has this to do with public transport? As Paul Daniels used to say, "Not a Lot!"
But fbb's recent visit to Leicester and his frustrating and doomed search for bus leaflets (read again) has a familiar ring to it. Despite the huge advances of modern technology, the simplicity and relative low cost of digital printing, it is increasingly difficult to find any printed bus information in many towns. Ladders to climb, platforms to cross and the ever-present possibility of of a plunge into disaster! Step out into rural areas and you only hope is to ask Mrs Miggins at No. 24. Even if you find anything, there is a good chance it will be out-of-date and then, inevitably, the blue flamingoes have got you.

fbb will be publishing (on January 1st) some suggested New Year Resolutions for the public transport industry. The "Chuckie Egg" style of searching for information may form the basis of some corrective hints. 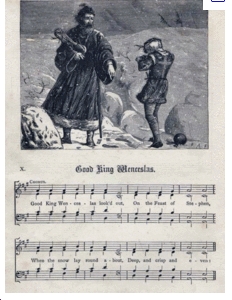 Wenceslas (907 to 935), was the duke of Bohemia from 921 until his assassination in 935, purportedly in a plot by his own brother, Boleslav the Cruel. His martyrdom, and the popularity of several biographies, quickly gave rise to a cult-like following and reputation of superhuman goodness, resulting in his being elevated to Sainthood and seen as the patron of the Czech state. He never was a King of anywhere! 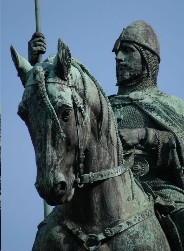 He is the subject of a Saint Stephen's Day (Boxing Day) Carol, published by John Mason Neale in 1853 that remains popular to this day, Good King Wenceslas.

The song's only tenuous connection with Christianity is in the last verse ...

In his master's steps he trod, where the snow lay dinted;
Heat was in the very sod which the saint had printed.
Therefore, Christian men, be sure, wealth or rank possessing,
Ye who now will bless the poor, shall yourselves find blessing.

... although one of the causes of the family feud that led to his death was his evangelical Christianity as opposed to the formal Roman Catholic faith of Boleslav.

And good "king" Wenceslas did look out "on the feast of Stephen"; St. Stephen's Day otherwise known as Boxing Day. If nothing else, fbb's ramblings can be topical!

And, talking of Good King Wenceslas, here is the fbb family "Brunchfast" menu for today. Please feel free to sing-along-a-fbb. Click to enlarge the image.