On the food retail industry (?)


Although the Competition Commission's recently issued final (and controversial) report on the Bus Industry ...

... has made the national headlines, fbb is amazed that a similar report on the power of the food retailing supermarkets has received so little publicity.
The Commission found that depite a huge number of smaller retail food shops in the UK, over 70% of food sales were in the hands of the larger providers, namely, Tesco, Waitrose, ASDA, The Co-op and Morrisons. The Commission found that head-to-head competition between retailers was rare, as a wide-ranging "basket" of food in one supermarket would cost much the same in another. 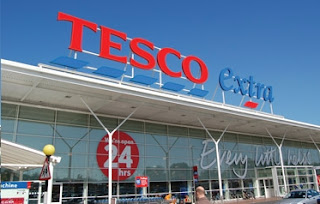 The Commission wants to open up these markets to more competition and is making the following proposals.
The big companies must allow the smaller ones to access the market with impunity. It will be a requirement for, say, Tesco to have a small avenue of locally owned food shops in each of their stores. The giant operator will be prevented, by law, from predatory pricing. In simple terms, an attempt to over-stock with lower priced goods will be forbidden. In our example, Tesco would be unable to undercut any price charged by the local shops installed in the Tesco store. 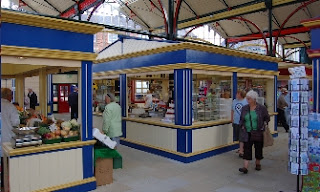 small-trader stalls recently erected in Tesco at
Saxborough in the South Riding of Yorkshire
Where products are similar, the store would be required to participate in a joint marketing scheme. For example, for a tin of baked beans, a voucher (or multi operator "ticket") would be available which could be exchanged for products from any stall or from Tesco itself. Indeed, traders may choose to sell Tesco goods if these offer better value and Tesco would be obliged to supply these at an "appropriate" wholesale price, allowing independent traders to use their supply stations without restriction and for a "fair" access charge. 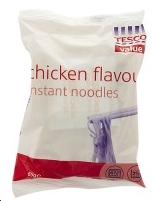 a packet of instant noodles available at
the Hoo Flung Tung stall in the Tesco Extra
store at Ballachulish, Scotland
And if one of the smaller stall-holders should cease trading, Tesco would be prevented from selling any product equivalent to those from that stall until a new stall holder was in place. Buying out a competitive stall-holder would also not be allowed.
Effectively, under the revised legislation, Tesco would be forced to hand over a percentage of its profitable business to any newcomer who chose to set up shop in competition.
We believe that these initiatives would result in smarter uniforms, cleaner toilets, cheaper baked beans, longer opening hours and leather seats for those waiting in checkout queues. The public would benefit from a better service at a cheaper price.
Indeed, the Commission proposes that, in order to make de-regulation work, it will rigidly enforce a policy of ...
more regulation.
---------------------------------------------------------------------
Of course this is an fbb fiction, isn't it? No one would be insane enough to suggest that such proposals would be realistic in ANY industry, would they? fbb thanks No. 3 son for supplying the content and inspiration for this blog.
But, hold the front blog, news just in ... 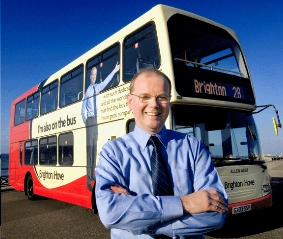 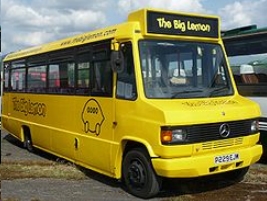 ... is very welcome to use his depot to park buses and he will be offering Big Lemon tickets at his sales outlet in Old Steine. 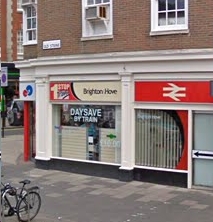 "our stakeholders are more than pleased to earn lower dividends on their shares in order to encourage competition in our industry. We welcome the privilege of reducing the income on our University routes in order to encourage this innovative and friendly new operator. All students should try the big lemon, it's really juicy!"
So there you have it. We are all exceedingly privileged to have the forthcoming bus industry competition legislation which will encourage competition, reduce fares and bring many new and innovative companies into the stagnated market.
And a final newsworthy picture, taken from the window of the Competition Commission offices, here at Victoria House, Southampton Row, London ... 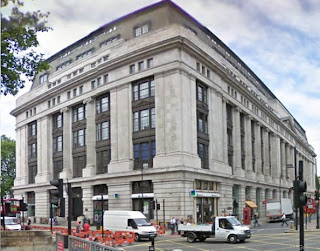 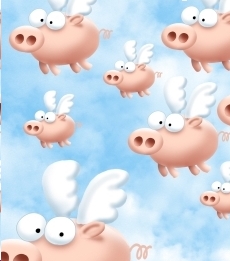 thanks, Rog, for such a perceptive report. One small point. Could you supply fbb with a list of bus stations owned by bus companies? There must be hundreds that fbb has never visited. 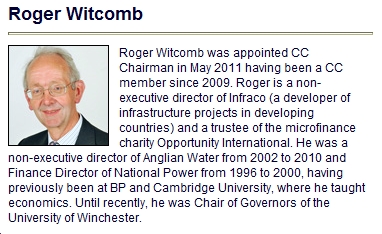 Oh yes, nearly forgot. Protesting vehemently about nasty Brighton and Hove, Big Lemon is withdrawing its competitive service 42 via Brighton University to the University of Sussex in January. Read about that decision (here). So not such good news for the Competition Commission.

Warning : this transitory news item may well disappear from the Big Lemon site in due course. 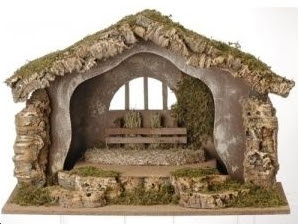 We MUST have the stable, surely? Erm, not necessarily.

The only authoritative and ancient source for our Christmas story is the Bible and it most definitely does not mention a stable. Nor does it mention a cattle shed! The only connection with animals is that the baby was placed in "swaddling cloths", a sort of Biblical Babygro, and placed in a manger, viz. an animal feeding trough.

And it doesn't say that the manger was at an inn, and there's no record of an inn keeper. Over the years people have embellished the story; artists have painted their own ideas of what it was like and perhaps, no, probably, we have lost sight of the truth by making the whole thing sweet and sugary.

In Judaea, it was normal for a part of a house to be set aside for the owner's animals. This might be one end of a single living, eating and sleeping room, or it might be somewhere separate, a shed,  barn, a cave, a lean-to outbuilding; in fact anywhere to keep the owner's wealth (his animals) safe at night. It would have been warmer than sleeping outside. Days were hot, nights were cold! And the animals' bedding would have offered a modicum of comfort.

While they were in Bethlehem, the time came for Mary to have her baby. She gave birth to he first son, wrapped him in strips of cloth and laid him in a manger for there was no room at the inn.

Luke Chapter 2 verse 6
And that's about it. Impressively unimpressive. A humble birth for a Holy child! God-on-Earth experiencing real humanity! That's what was and is so special.