No News is Good News!

fbb promised a review of his journey "oop north" but there's not a lot to say. So let's start with a song from the great Gracie Fields. 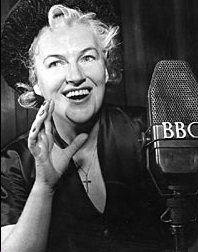 For years we had a Christmas tree in a copper pan
On the whatnot, in St Pancras booking hall
It didn't seem too small 'til Station Master Stan
Had a notion that he'd make one big and tall
So he saw some kiddies bricks and used some cash to buy
And built it high above our platform wall. 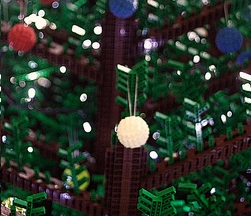 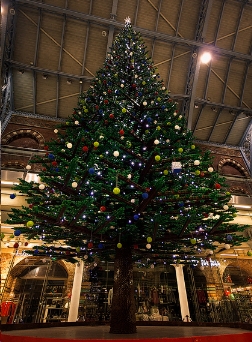 When porter's had a skin-full at the pub, 'The Bunch of Grapes'
He doesn't go all fighting mad and getting into scrapes
No, you'll find him all dressed up playing Tarzan of the apes
In the biggest Lego-brick tree in the world. 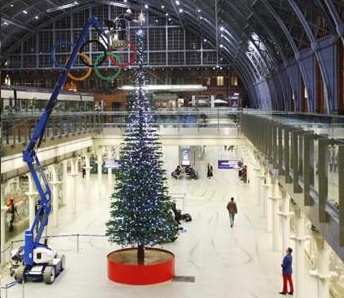 The dogs all come around for miles, a lovely sight to see
They sniff around for hours and hours and all enjoy (their tea?)
So I've had to put a notice up; "It's just a plastic tree!"
It's the biggest Lego brick-tree in the world!
It's the biggest Lego brick-tree in the world!
For those who might like to listen to a less well-known version of the song, please click (here).
Anyway, fbb's journey from Portsmouth to Sheffield (via St Pancras!) with a stopover in Leicester went astoundingly well. Six trains and two ferries ran perfectly to time and it really warms the cockles of your heart ... 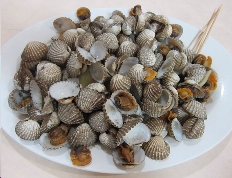 ... to see the railway doing what it does best, and doing it very well.
But a bit like those motoring journalists who find fault with the ash tray or shape of the gear stick, there has to be something to grump about! And there is.
The 1532 from Portsmouth was a four coach "blue" semi-suburban unit. 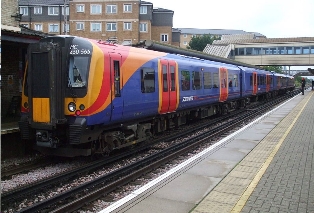 By Haslemere it was as full as a Monday to Friday commuter run. What people do on Sunday if they aren't helping to run a church is a mystery to the podgy one; but whatever it was there were loads doing it! fbb was musing on this disgraceful state of affairs; not just the loads of people but that fact that he was squashed uncomfortably by a neighbouring gent of equally ample proportions. Whatever happened to empty Sunday trains?
fbb was still musing on the sadness of things as they passed Wimbledon Traincare Depot ... 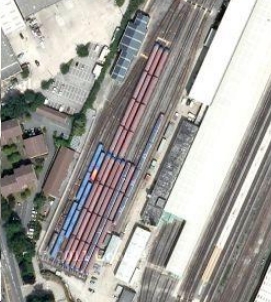 .... bursting with units which could easily have been coupled to fbb's four, making a comfortable eight!
And then (grump the second) there's the magnificent St Pancras Station. The building (and its tree!) is stupendous, but after a mammoth trans continental trek from the Underground half way to Kentish Town to get to the East Midands Trains platforms, there's nowhere to sit. Correction, there are approx 1 dozen seats.
On Sundays, Thameslink, aka First Capital Connect, runs its 15 minute frequency into St Pancras. 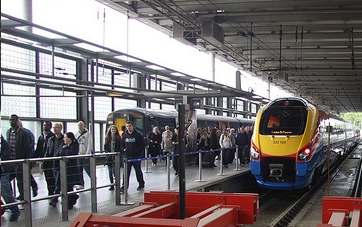 So, to add to the jostling crowds standing patiently to be let through the barriers for their trains to Leicester, Nottingham, Derby and Sheffield, there were hordes of Christmas Sunday what ever they do-ers waiting to go to Bedford (etc.). fbb was obliged to adjourn to the nearby coffee shop for a cup of foul coffee and a dry eccles cake to get a seat. So, Mr St Pancras, turn those shiny poles people perch precariously upon into proper benches. fbb guesses that the aim of the game is to encourage passengers to go and spend their cash at the 3 mile long champagne bar etc. fbb is not that wealthy!
So two outward grumps, but none on the return. But from Waterloo Station on Tuesday the following pieces of computer generated nonsense. Text on the departure screen at the buffers of platform 13  reads:-
This train is
not scheduled
to stop at this
station
CRUNCH! 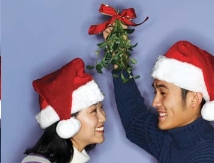 Mistletoe is the County flower of Herefordshire. It was voted such in 2002. It's name comes from a variant of a word meaning "dung". (Lovely!) Birds spread the parasitic plant through their poo. (Lovely again!). Needless to say it has no connection whatever with Christmas, having its roots in pagan sexual rituals.
The use of Mistletoe at Christmas was rarely alluded to until the 18th century.   According to custom, the mistletoe must not touch the ground between its cutting and its removal as the last of Christmas greens at Candlemas; it may remain hanging through the year, often to preserve the house from lightning or fire, until it was replaced the following Christmas Eve. The tradition has spread throughout the English-speaking world but is largely unknown in the rest of Europe.
According to another custom, a man and a woman who meet under a hanging of mistletoe were obliged to kiss. This particular "challenge" may be of Scandinavian origin. It was described in 1820 by American author Washington Irving in his "The Sketch Book of Geoffrey Crayon".
For God loved the world so much that He gave His only son [to die on the Cross] so that everyone who believes in Him may not die but have eternal life
John Chapter 3 verses 16

Next Blog : due Thursday December 15th
Posted by fatbusbloke at 07:04