Star Trak : The Next Generation?

It's public transport information, Jim,
but not as we know it. 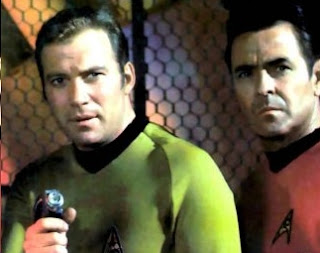 A bus timetable service giving real-time information to passengers in Leicester and Leicestershire has ended. The Star Trak system was turned off across the city and county on 31 January 2011. The move came after bus operator Arriva Midlands decided to withdraw from the system. The city council decided it would no longer be viable to operate the system without the participation of Arriva.
Councillor Abdul Osman, Leicester City Council's cabinet member for regeneration and transport, said: "Leicester City Council has closed the entire Star Trak system in Leicester and Leicestershire. We will continue to work with our partners and third parties to explore options for the future and to implement an orderly shut-down of the remaining system across the East Midlands." The future of this system has been uncertain since Nottingham City Council left the Star Trak consortium in October of last year.

The shut down will save the city council £200,000 a year in subsidies and staffing costs.

But no-one has told the Airport; this from their current web site!


Star Trak is a real time bus passenger information system that uses state-of-the-art technology to provide accurate and up to date real time information about selected bus services. All airport bus services are fitted with the necessary equipment to enable passengers to find out exacty (sic!) when the next bus is due to arrive. Real time bus information screens are provided within the Arrivals hall at the airport and also at each of the five bus stops located on the terminal front.
And this is a typical "Star Trak" bus stop, here near the Co-op in Groby, complete with little "next bus" screens. 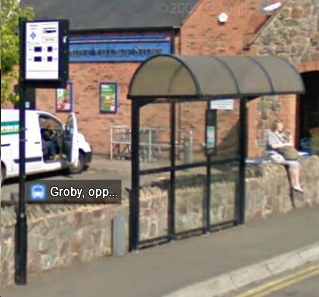 Now fbb doesn't KNOW why Star Trak failed, but SUSPECTS that, like a huge amount of modern technology, it simply didn't work properly. The pull-out by Arriva is likely to be more of a symptom than a cause.
As with Portsmouth, who closed their system even before it opened, and South Yorkshire, who can't make theirs work properly, these systems need tending like a delicate hot-house plant. If left to work sustainably and automatically, they shrivel and die. It also helps if the managers of the system know where the buses go.
Which brings us conveniently back to groovy Groby. Look at this little fbb map of the bus stops in the centre of the village for the convenience (?) of passengers travelling towards Leicester..

Of the four buses an hour (Monday to Saturday daytime); two only, 26 & 28, stop at the Co-op [RED dot], whereas the 29 and 29A, unable to turn right into Leicester Road, run via the by-pass and the link road and thus join the other two routes at the Pymm Ley Lane stop [GREEN dot].
So where does Star Trak's Jim Kirk look-alike captain install their real time sign? Well, you've seen it. It's at the Co-op and thus showed only half the bus service to Leicester. The Pymm Ley Lane stop was not so adorned. 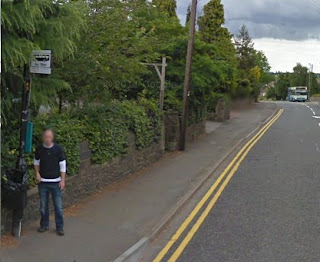 If Groby was typical of the general style of "Trakkie" thinking, then it is no wonder that Arriva pulled out and the whole thing fell apart.
For Sunday it was worse. There is no service on routes 26 and 28, so friend David often had to direct confused Groby residents away from the unserved Co-op stop to Pymm Ley Lane where at least they could catch the hourly service 29A.
But Star Trak is no  more (neither, sadly, is Star Trek!) and the expensive real time bus stop has been removed. Never mind, there are departure lists at BOTH stops which make things very clear.
Or do they?
Despite the fact that all four services follow the same route into Leicester, the dreaded computer prints out departure lists for each separate timetable, two at the Co-op and four at Pymm Ley Lane. There is nothing at the Co-op to tell the unwary or befuddled passenger that there are MORE buses at Pymm Ley Lane. It is not unusual, says friend David, for frustrated folk to stare angrily up the road from the Co-op as a possible bus to Leicester creeps in via the by-pass and zooms away un-caught.
It all may be correct, but it is potentially VERY confusing. So fbb, always willing to help, offers his version of a departure list for the Co-op stop:- 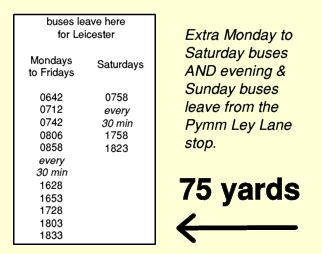 Now that wasn't too hard, was it. And it didn't need expensive software, just a fat bloke who knows where the buses go! Available for hire at modest prices!
Star Trak ...

bootiful!
The modern domesticated turkey is descended from one of six subspecies of the wild turkey, meleagris gallopavo gallopavo, found in the area bounded by the present Mexican states of Jalisco, Guerrero, and Veracruz. There the ancient tribes domesticated this subspecies; they used its meat and eggs as major sources of protein and employed its feathers extensively for decorative purposes. The Aztecs associated the turkey with their trickster god Tezcatlipoca, perhaps because of its rather ludicrous "gobble".

Domestic turkeys were taken from Mexico to Europe by the Spanish, where they were confused with guinea fowl that had been also been imported from Eastern Europe but via Turkey, hence the British name of the bird. To add to the confusion, the French call the turkey "dinde", i.e. d'Inde, "from India".

The 16th-century English navigator William Strickland is generally credited with introducing the turkey into England. His family coat of arms, showing the bird as the family crest, is among the earliest known pictures of a turkey.  It was in more recent times that the turkey was exported back to America and became the traditional (yet modern) fare of Thanksgiving.

Talking of birds, the Israelite tribes, as they journeyed from Egypt to the Promised Land, were miraculously kept alive ...


The Lord said, "My people shall have meat and bread." In the evening flocks of quails flew in, and in the morning, when the dew evaporated, there was something thin, sweet and flaky, as delicate as frost on the desert. They called it "manna", the Hebrew for "What is it?"
from Exodus  Chapter 16 verses 13 to 15


The first ever Cornflake breakfast; or even Frosties?

Next Blog : due Saturday December 17th
Posted by fatbusbloke at 14:03