When fbb was wooing his future Mrs, the Argyle Line was happening in central Glasgow. On various visits, bravely crossing the border, fbb has enjoyed the Whifflet line ... 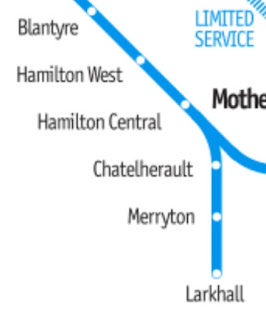 ... Airdrie to Bathgate giving a 15 minute service Glasgow to Edinburgh) ... 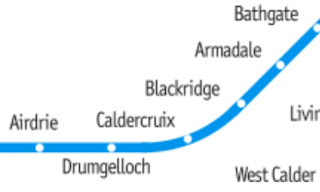 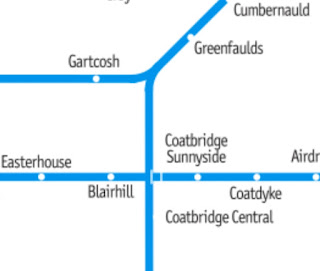 ... and the biggie.
Certainly the opening of the Waverley route as far as Tweedbank has been one of the greatest success stories of rail in Scotland.

And these are just the rides that fbb has enjoyed personally. There is electrification to Dunblane, a proper service on the Fife Circle, the North Berwick branch; all still on the old man's "to do" list.
There is the Leven branch to come ...

... and electrification to East Kilbride ... 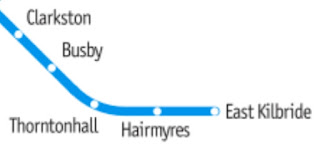 ... and more!
It make your noble blogger almost as breathless as watching Cam Norrie not quite winning at Queens. (But the boy done good!)
Whereas In England ...
For this week's start prize, blog readers are invited to list the rail re-openings south of Hadrian's Wall over the last 50 years.
It won't take much paper.
But, delights are on the horizon.
In fbb's area, in addition to station re-openings in comparative profusion - some already built, some planned and some promised - we have, at last, the impending arrival of a real train service at Okehampton. 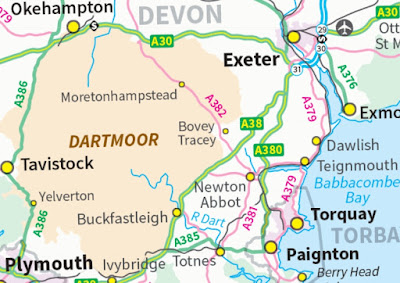 Whereas the Great Western Railway ran via the coast to Teignmouth, then inland to Newton Abbot and on to Totnes and Plymouth, the Southern Railway ran from Exeter via Okehampton and Tavistock. The little local storm-on-a-beach a few years back gave added impetus to opening up the back way route to offer resilience in bad weather which, according to Greta and David, can only get worse.
So it is that sometime next year Okehampton will gain an hourly service from Exeter. 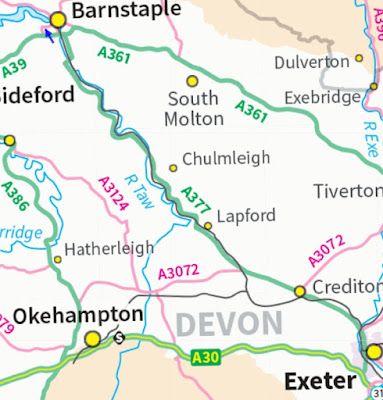 This will join an hourly service to Barnstaple providing a magnificent 30 minute frequency to Crediton.
The station at Okehampton is not well placed for the town ... 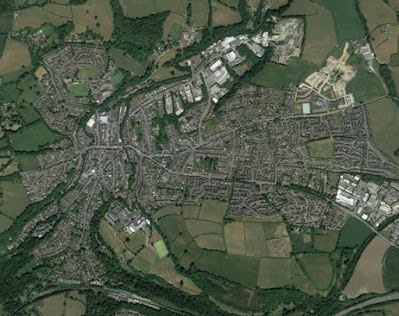 ... seen c/o Google Earth in the woodland, lower left and below, enlarged a bit! 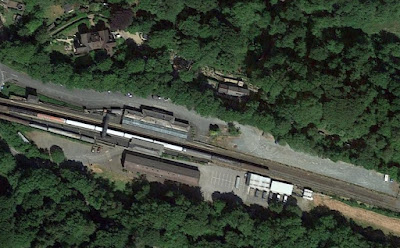 The station building has been kept in excellent condition by the "Friends Of" ... 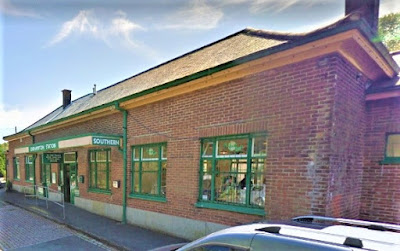 ... and there appears to be a more than adequate oodle of car parking. 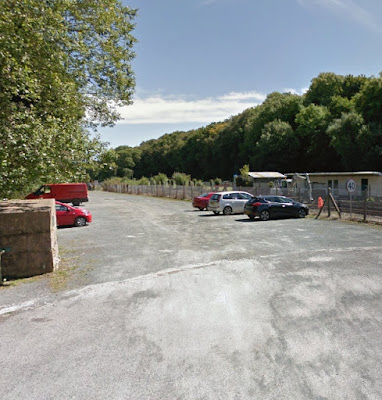 Many readers will have appreciated the summer Sunday special service sponsored by Devon Council and will look back lovingly to the days when a well-used network of bus routes fanned out from the station.
The enthusiasts for the re-opening would hope that the station will become a railhead for car drivers from the vast areas of poorly served country nearby (and far-by), the establishment of good bus services up the hill to the station is of importance and not just for weekend tourists.
Also, not far from fbb-land, stuff is happening in the Bristol area, sometime soon, sometime later or sometime never!

(click on the map for an enlargement) Trains are promised on the Portishead branch and have been promised, cancelled, postponed and re-promised several times over the last couple of decades. Likewise a service vis Filton, Henbury and Hallen via the back way into Avonmouth should be straightforward. The track is there, it is used by freight, so all that is needed is a bity of fettling and a few cheapo (economically priced?) stations and that should happen.
Then, of course, there is the Government's un-Beeching the Beeching Axe list. For what it is worth, here it is as announced:-
In May 2020 ten schemes
Meir station
Barrow Hill Line Sheffield and Chesterfield
Ivanhoe Line Burton-on-Trent and Leicester
Isle of Wight; Newport and Ventnor
Wellington and Cullompton stations
Bury to Heywood and Rochdale
Clitheroe to Hellifield
Devizes via a new station at Lydeway
Waterside line between Totton and Fawley
In November 2020 fifteen more schemes
Beeston Castle and Tarporley
St Anne's Park
Ferryhill
Bolton, Radcliffe, and Bury
Stratford-upon-Avon to Honeybourne
Waverley, South Yorkshire
Langport/Somerton, Somerset
Melton Mowbray to Nottingham
Improved services Falmouth to Newquay
Maid Marian line Nottinghamshire
Reinstating rail access to Cirencester
Swanage and Wareham
Gainsborough Central and Barton-on-Humber
Consett and Newcastle
What has been announced is well short of a worked-through proposal. Instead, there will be "further studies". fbb doubs he will live long enough to see any of them.
The Isle of Wight re-openings are highly unlikely (too expensive, not enough passengers) and one on the published list was the re-opening of Watford Junction to St Albans Abbey ... 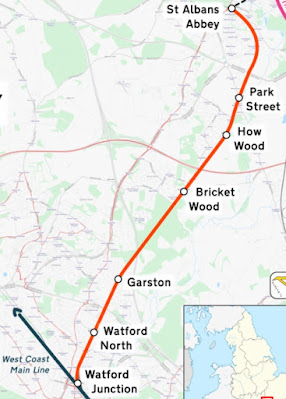 ... which seemed very open when fbb last passed that way! 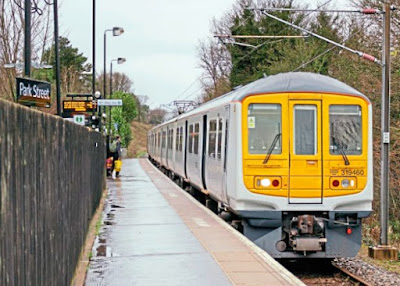 It has even got electric string now.
All of which brings us to an interesting event later this week. 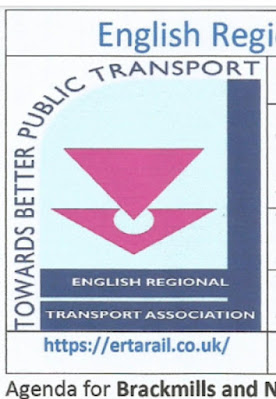 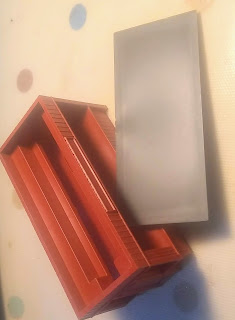 Is this, fbb mused, one of the toughest plastic kits to assemble?
Impressed with fbb's new platform canopy at Peterville Quarry Railway - now with added lights - No 1 son suggested that there should be a kiosk selling coffee of average quality in cheap polystyrene cups. fbb riposted with details of the new cafe and marquee, but did feel the need of a station bookstall.
Airfix/Dapol make one such ...

... but it comes with other bits that the old man doesn't want. But what about Peco? 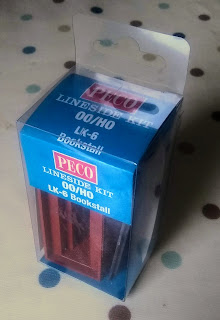 With some printed strips of "magazines" it consists of the two plastic parts illustrated. For model railway historians, the model was originally made by Merit ... 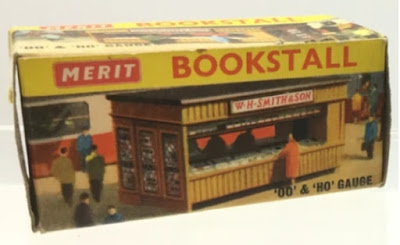 Will fbb be capable of coping with the complexity? 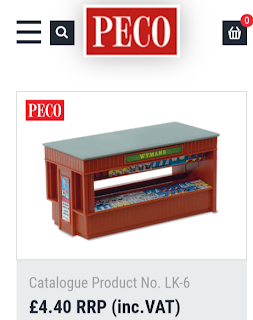