The Benefits Of Strategy!

NESTRANS, possibly North East Scotland Transport (except that it isn't all of north-east Scotland) has a web site (of course) which tells us what this acronym means.

Nestrans is the Transport Partnership for Aberdeen City and Shire.

Our purpose is to develop and deliver a long-term regional transport strategy and take forward strategic transport improvements that support and improve the economy, environment and quality of life across Aberdeen City and Shire.

We all love a strategy, particularly if its is long term and will deliver improvements. NESTRANS continues on-web:-
Constituted as the North East of Scotland Transport Partnership under the Transport (Scotland) Act 2005, Nestrans began work as a statutory Transport Partnership on 1 April 2006. It is one of seven Transport Partnerships set up across Scotland to provide a co-ordinated approach to transport planning and delivery between different local authority areas. Nestrans’ area covers both the City of Aberdeen and the wider Aberdeenshire area.
Told you so - not ALL of North East Scotland, then?
Its Board is made up of Councillors from Aberdeen City and Aberdeenshire Councils, as well as non-councillor members appointed by the Minister for Transport.
The new Partnership builds on five years of voluntary partnership working between Aberdeen City and Aberdeenshire Councils, Scottish Enterprise Grampian and Aberdeen and Grampian Chamber of Commerce. These bodies came together to form the ‘original’ Nestrans in 2001 as a means of working together to tackle the transport challenges in the north east and develop the Modern Transport System strategy.
With the possibility that one of NESTRANS' strategy objectives might be to provide good public transport information for passengers, fbb decided to search for information about buses from Bucksburn. The detailed reason for the old man's search will become evident in due course.
For the time being, fbb will search.
Guess what? 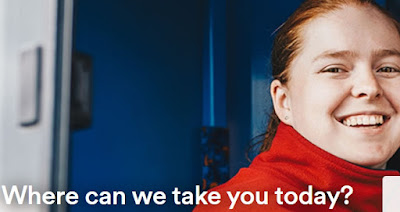 Aberdeen Bus Travel Times, Routes & Prices
Stagecoach north-scotland
With your Aberdeen zone 1 ticket, you can travel anywhere in Aberdeen city centre and as far as the AECC, Dyce, Aberdeen Airport, Bucksburn, Kingswells and ... 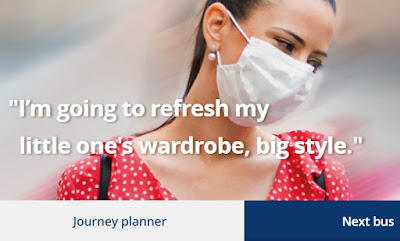 First Bus Aberdeen
Bus Tickets, Timetables & Journey Planner
We are First Bus Aberdeen. On our website you can plan a journey, view timetables and ticket prices, buy tickets and see when your next bus is due. Click here ...
‎Timetables · ‎Next Bus · ‎Journey planner

Aberdeen City
Aberdeen Bus Travel Times, Routes & Prices
With your Aberdeen zone 1 ticket, you can travel anywhere in Aberdeen city centre and as far as the AECC, Dyce, Aberdeen Airport, Bucksburn, Kingswells and ...
It's a mess!
fbb never thought he would write this but, thank goodness for Traveline ... 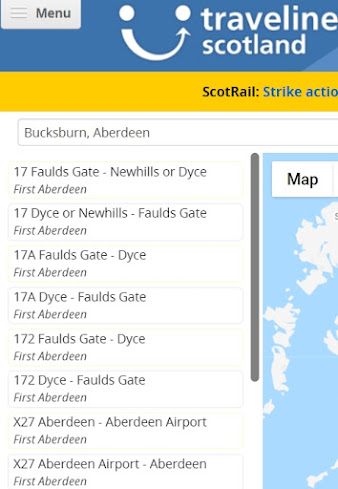 ... although, as we shall see, that source of information is far from trouble free.
But fbb makes a start by going to a bus stop near the former village centre in Bucksburn. This particular stop lies between Oldmeldrum Road and the new roundabout at the junction of the A947 ... 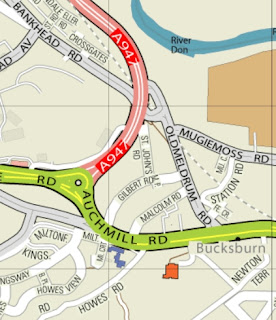 ... which is on a bridge (more a culvert) on top of the Bucks Burn from which the former village takes its name. 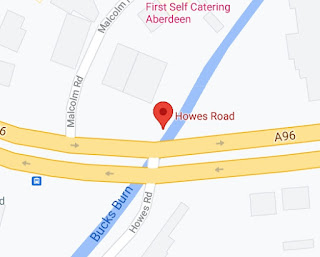 Google Streetview calls it Bucksburn Howes Road and below we see it for real. 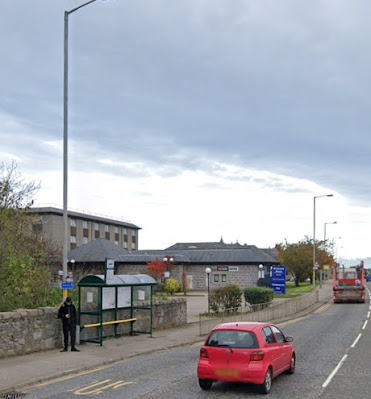 Streetview also provides us with a list of routes which call there. 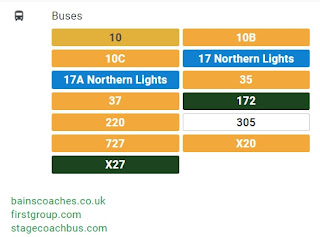 Note, in passing, that the above list includes Stagecoach service 10, a number which does not appear in the Traveline list! Although it does appear in the detailed Traveline timetable. 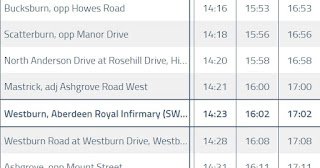 Service 10 is the premier route from Inverness to Aberdeen which currently offers and hourly through servicer, enhanced to half hourly at each end.

Note again that there are no times shown for Bucksburn which may well be because it is too close to Aberdeen. Not also that the service from Inverurie has a total of four time points in the Aberdeen direction ...

... but only one given outbound. This is not our concern at Bucksbirn, but fbb presumes there is a loop at Inverurie. Does the Stagecoach map help? 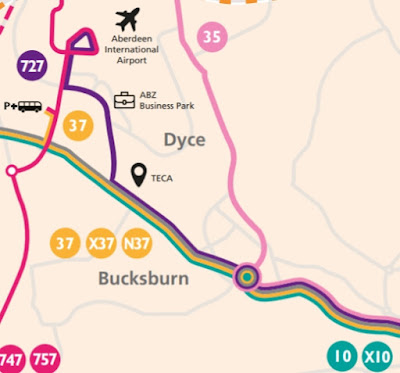 Nope. The map runs out before Inverurie. But you usually get a posh motor! 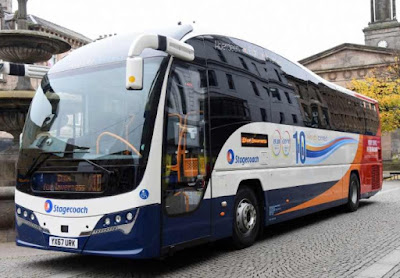 Stagecoach 37 also runs in from Inverurie ...

... with, presumably, a similar loop at its outer terminus AND times at Kintore but none at Bucksburn. So what is the difference between service 10 from Inverurie to Aberdeen and service 37 following, apparently, the same route? 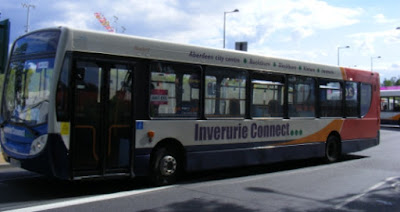 It has ordinary buses and has, at some stage in its history been branded "Inverurie Connect".
Stagecoach 35 is another long distance run ...

... from Elgin, along the coast to Banff and then inland to OldMeldrum and Aberdeen via Bucksburn (see awful Stagecoach map above). 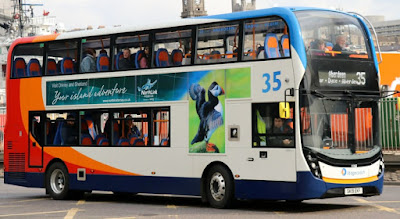 Some buses remind us that it is a really good ride on the top deck. 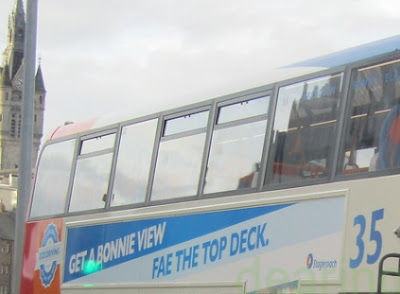 "Fae" the top deck or "Frae" the top deck. Maybe the former as the accent in Aberdeen is very different from that in Glasgow!
Which leaves the Stagecoach Jet 727.
Can you possibly guess where that route goes? 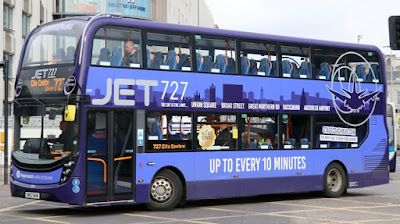 It runs every 10 minutes Monday to Friday daytimes and every 20 evenings, Saturdays and Sundays. The time point is Bucksburn Police Station which is situated sort-of opposite our Howes Road stop ... 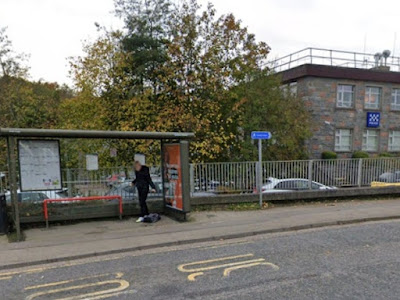 ... so Stagecoach uses a different name from Traveline and google - no surprise there. And ...
Bucksburn features on the graphic on the side of the bus. 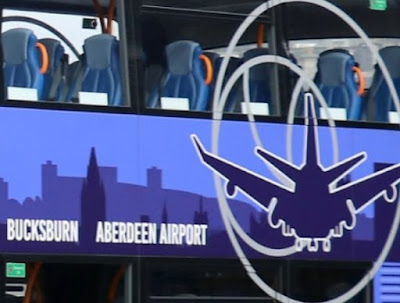 All these Stagecoach buses terminate at Union Square in Aberdeen.
But the other operator is First Bus which developed from the buy-out of Aberdeen Corporation Transport and a subsequent merger with Traveline.
First's routes via Bucksburn are a delight and a joy for tomorrow's blog.
Next Bucksburn blog : Thursday 1st July
Posted by fatbusbloke at 02:00