Today's service is live and ON-LINE.
Click on this link (here),
which will take you to the YouTube page.
Then click on the icon for today's date. 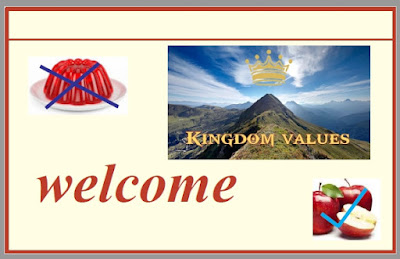 The fbbs have been asked to lead a service at Kilmington Baptist Church on 27th inst, their first such "event" for well over 12 months. The Church has the privilege of lots of clever technical stuff and a strong team of musicians, computer prodders etc. etc. Interfacing with this quite sophisticated set up have involved some strenuous advance preparation.
Which is one reason why fbb's latest model project has stalled.
The back story is that the Peterville Quarry Railway decided to extend and adapt the former site foreman's cottage to make it the main catering facility for the railway's eager and peckish visitors. So fbb felt a bodge coming on. Starting with a Bachmann low relief hair and beauty salon, similar to establishments regularly visited by your author (!!) ... 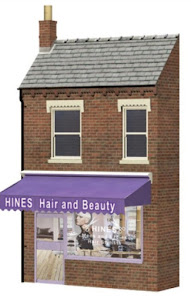 ... the side walls were extended. 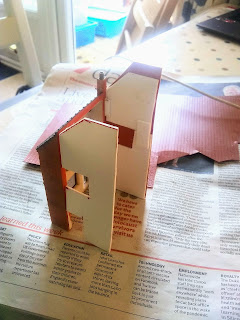 Then the roof was extended upwards and the side walls brick plated. 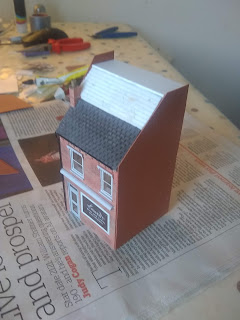 A couple of dormers was made up from bought-in windows and bits of sheet plastic. Windows and a door were pierced in the side. 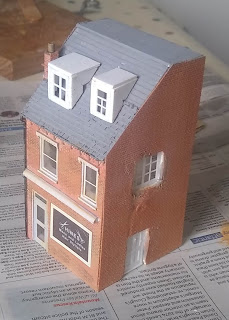 Eagle eyed readers may have already spotted that the sun shade over the window obediently fell off. Unfinished in detail, the property was posed as it will appear on the layout. 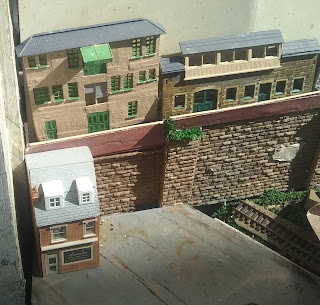 The reason for this bodge concerns the installation of lighting in the buildings and the need for the wiring to be protected from the weather.
This particular mystery will have to be revealed once work on the project has recommenced. There is also a marquee to be added to cope with the summer crowds, crowds which also have to be added!
A chum asked, "Why spend money on an expensive Bachmann building; why no build it all yourself?" fbb is quite confident to add bits to an existing strong model but lacks the commitment and the skills to start from scratch. You should have seen the previous cafe on the station platform - fortunately never recorded for posterity!
Oooh, look! Having written the above, fbb decided he had to make a start on the delayed cafe, so below is the first bodge of the marquee. It is made of thick plastic because thin stuff (looking a bit like canvas) would be too fragile for outdoor use. 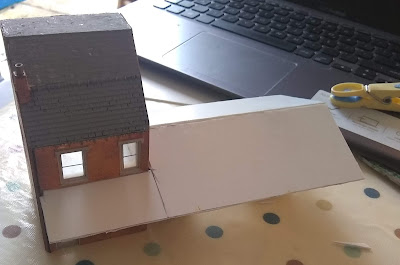 The marquee is, of course, "posed" on the fbbs' salt and pepper pots. Next job; some tent posts to replace the condiment set!
A Puzzle Picture

Readers may like to identify this model, or, indeed, the prototype on which it is based. The answer will be revealed at the end of this blog!
Slip Coach 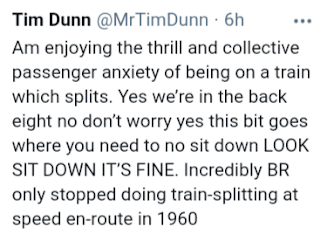 Tim reminds us that "Slip Coaches" finally ran in the UK as late as 1960.  The idea of a slip coach was that as the train thundered along the line, a guard on the back coach (or coaches) pulled a lever and uncoupled it/them from the train. The detachment then trundled into the station under its own momentum with the guard using his brake to bring the loco-less train to a stand in the platform.
That way the "proper" train could continue at speed, thus saving valuable minutes of running time.

Sadly, railway technology did not offer a solution to picking passengers up at speed!
Early set down experiments were scary! 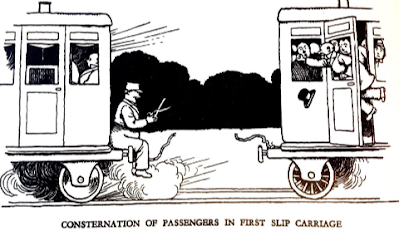 fbb is grateful to a correspondent, who occasionally ventures north eastwards, for drawing his attention to the on-line leaflet for the Newcastle (upon Tyne - in case you wondered) open top bus tour which is now running at full timetable, every 30 mins seven days a week). 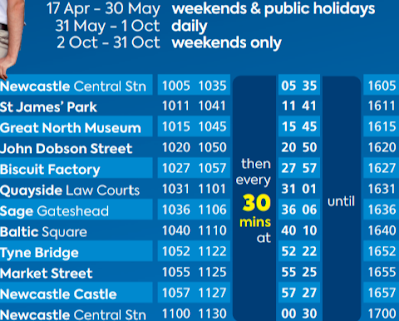 No doubt printed versions are readily available -please note in other far flung parts of the UK!
For those cognisant of the Novocastrian ambience, the sights will be familiar on the route which wiggles impressively around the famous bits. 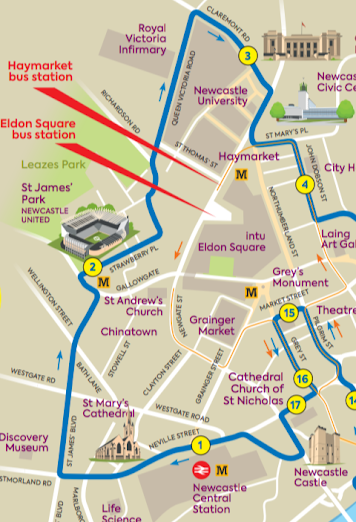 It eschews the town bus stations - which is a pity - so the main "terminus" is outside the Central railway station. It trundles via both banks of the Tyne ... 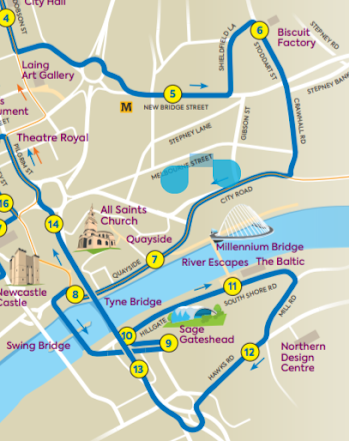 ... and crosses the water via both historic bridges.
fbb was intrigued by the possibility of a visit to the Biscuit Factory ... 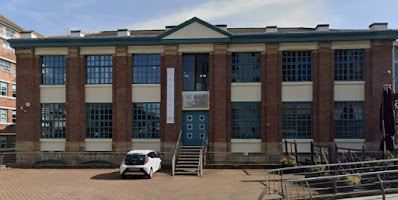 ... which is a modest two storeys at the front but four floors at the back. 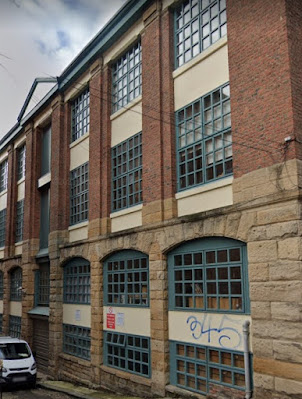 This oddity came about because, at some stage after the twice-cooked tasty treats were in production, the roads including Stoddart Street (the front door) were raised up significantly.
As fbb was salivating gently at the though of all those lovely biscuits coming off the production line ... 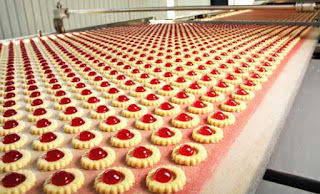 ... he read that the biscuit factory is in fact(ory?) an Art Gallery with studios in the sunken bit. Shame - no freebie Jammie Dodgers.
Two buses (is there a spare?) have been imported from Scarborough ... 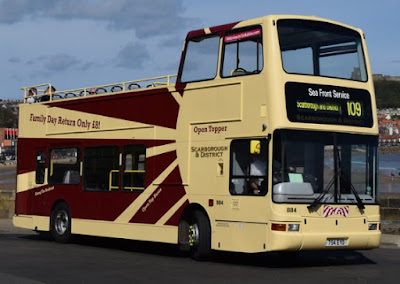 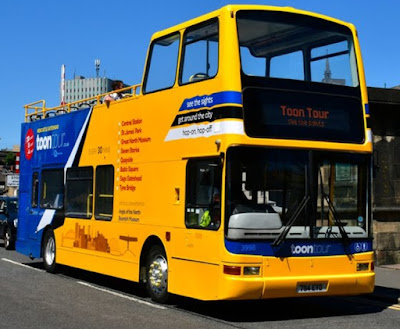 ... and fettled up quite nicely. 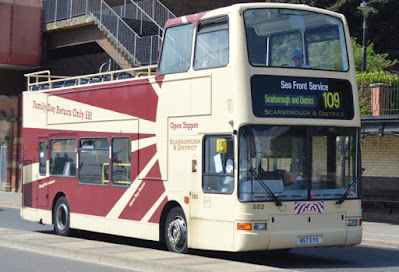 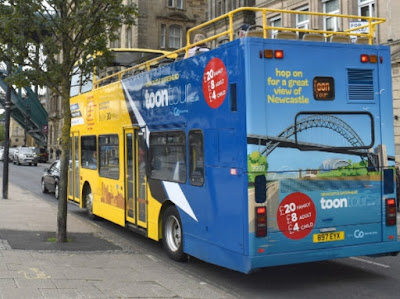 The leaflet also offers outings by X-lines service bus to many other places of interest - which is good. BUT the fares situation is complex, all because, fbb surmises, the Toon Tour does not welcome OAPs for free, merely offering a child fare on production of the Twearly pass.
So the two (why are there TWO?) day "rover" tickets do NOT include the Toon Tour ... 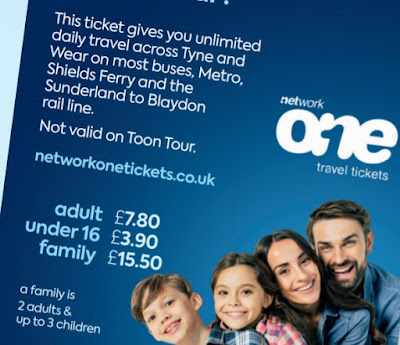 ... but the Toon Tour ticket DOES include a day "rover" albeit only on Go Ahead buses. 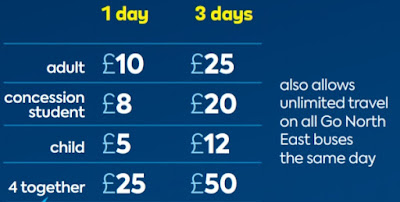 So a Tour plus a return ride from Newcastle to Middlesbrough, all for a tenner, looks like excellent value! But ...
Customers travelling from Newcastle, Gateshead, Heworth
to Teesside will need an X9 l X10 Plus Ticket.
X9 | X10 Plus £8.50
... you do wonder.
The Puzzle Picture
It's a memory stick, innit? 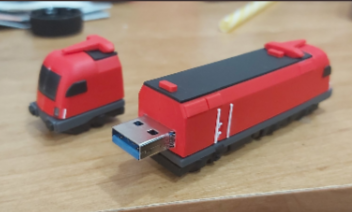 fbb wants one! How about one in the shape of a Weymann Fanfare? 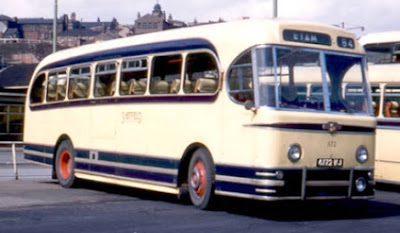 In Sheffield Transport livery, of course!
Next as yet undecided blog : Monday 7th June
Posted by fatbusbloke at 02:00