From Coast To Capital 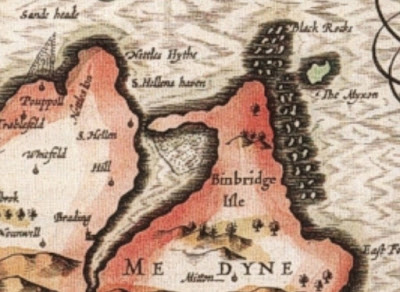 The Isle of Wight has enjoyed three "capital" towns in its history. Oldest is Brading (above lower left) which once stood on an arm of the sea known as Brading Haven. If you totter down Quay Lane past the old Town Hall and the Church ... 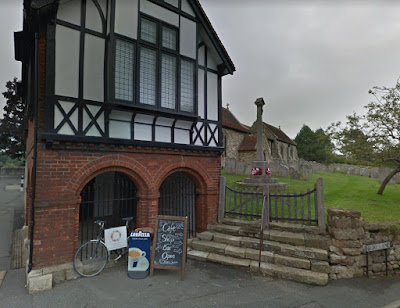 ... and, if you know where to look, you can find the stone edging of the original quay. But the Harbour was allowed to silt up and the Island's HQ was moved to a new town on the north west coast. Showing astounding originality the community took the name of Newtown where there is another old Town Hall. 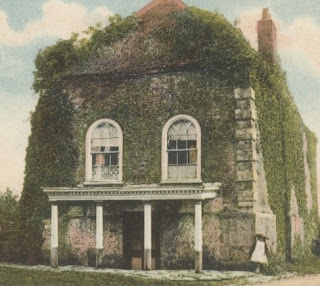 A century or two later, better access for ships was provided by the tidal waters, and a new port was established at the end of the navigable stretch of the River Medina. Doubtless clever readers can guess the name of the latest and current Island "capital".
Today's blog does a contrast and compare of bus services from the main resorts into the capital from a timetable book that fbb created lovingly on his computer in 1997, comparing it with todays Southern Vectis booklet.
To aid our readers' tired brain cells, fbb will deal with each route in turn. But first, here is the network diagram from 1997 ... 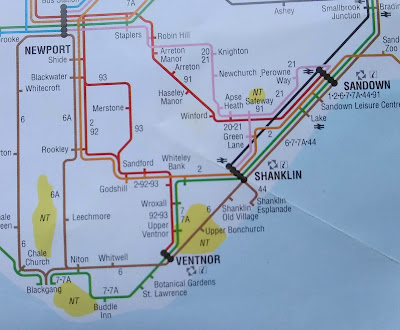 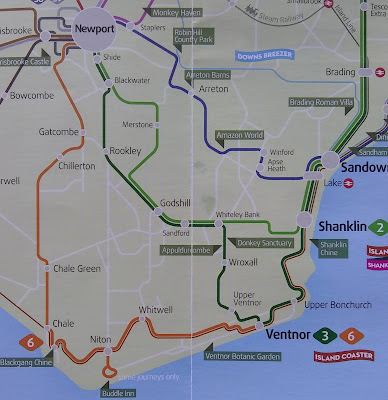 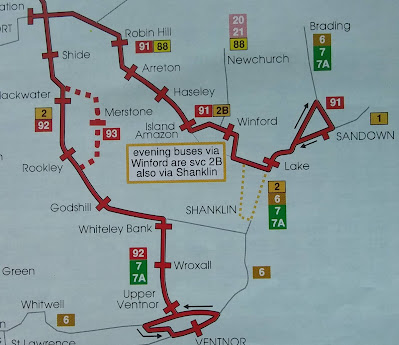 Service 91 (together with 92 and 93 below RED) ran through to Cowes to connect with the Red Jet ferries to Southampton. It ran every hour ... 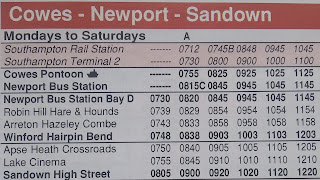 ... but was slightly enhanced by occasional routes 20 and 21 via Newchurch. 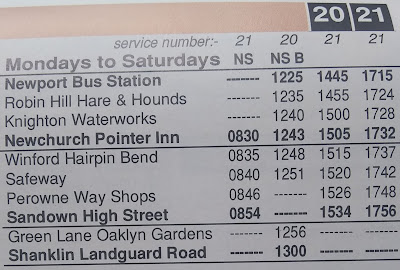 Newchurch (you've guessed it) was where the ecclesiastical authorities built a new church ... 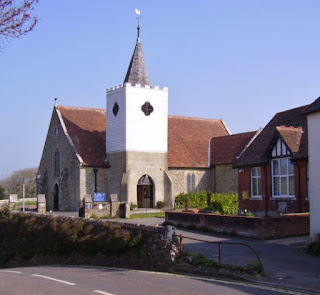 ... sometime in the 1200s, to serve the scattered population from Ryde round the coast to Ventnor. You needed to be tough to go to church back then!
Sandown to Newport 2021

The route is the same, but the service is increased to half hourly in the peak summer (journeys shown in boxes) and fbb thinks that this is a best ever service along these roads.
There are now no buses at all to Newchurch.
Ventnor to Newport 1997
See map above the 91 from Sandown. 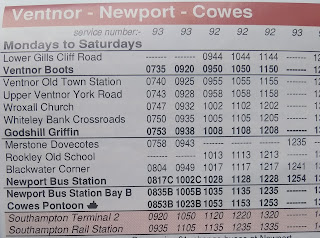 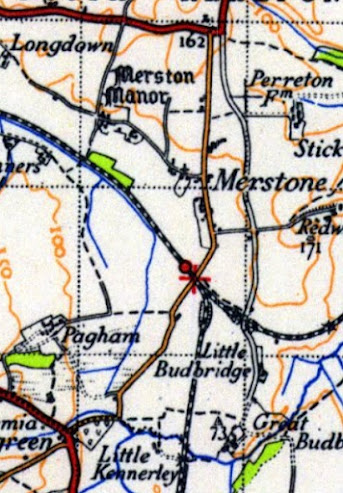 ... a village which once hosted a railway junction, albeit not a very busy one! 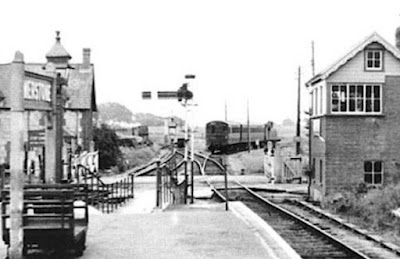 To this day, Merstone is one of the very few Island communities that still has no street lighting! 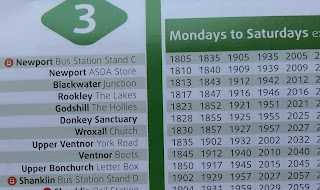 We have already met service 3 (DARK GREEN) which provides the main line service between Ryde and Ventnor before following the traditional route via Wroxall and Godshill onwards to Newport. Today's service 3 is double the frequency of 1997's service 92/93.
But no mention of Merstone?
Shanklin to Newport 1995 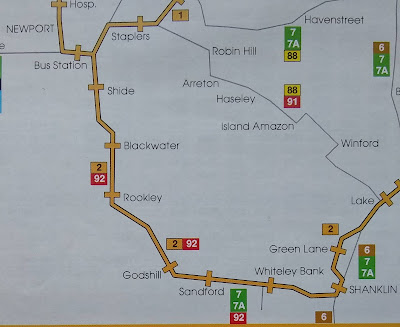 This is our old circular ORANGE friend Service 1 running half-hourly Cowes, Newport, Ryde, Bembridge, Sandown; at which point it becomes Service 2 to return via Godshill to Newport and back to Cowes.
But no mention of Merstone?
Shanklin to Newport 2021 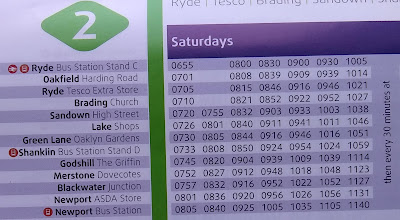 Remember? It too runs through from Ryde and follows the same route via Goidshill as the 1997 orange one but is now LIGHT GREEN. It also still runs every half an hour.
But look at the time point after Godshill.
Yep, Merstone now has a bus every half an hour! 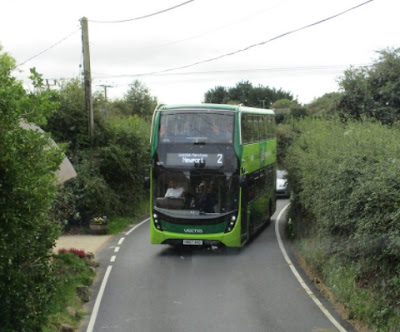 Such a frequency has never been known since the first ever bus trundled from Nettlestone to Ryde!
Godshill, once a mecca for coach trips ...

...  now has four buses an hour to Newport - its best ever frequency in recent memory.
The Church and its associated cottages are probably the most photographed group of buildings on the Island, whether in the model village nearby ... 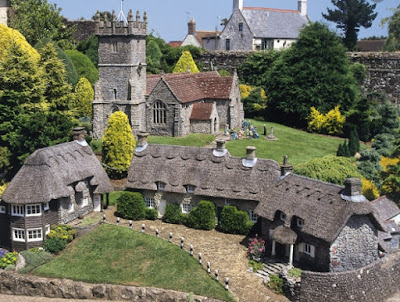 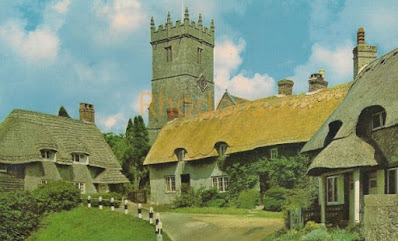 Which Leaves Blackgang to Newport 1997 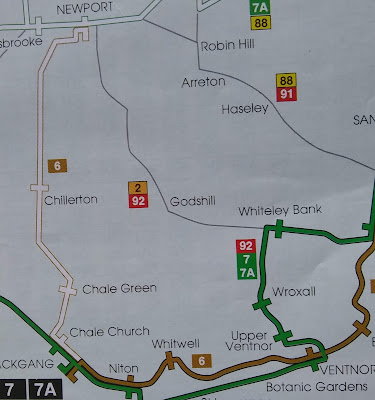 Service 6 was the main route running almost once an hour ... 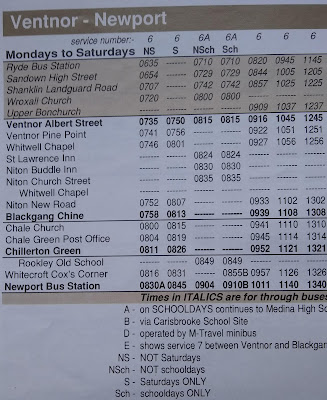 ... if you include 6A oddments, mainly in place for school pupils. Chale Green and Chillerton are both pleasant villages ... 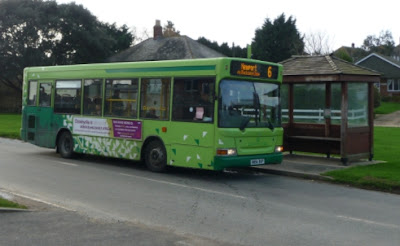 ... but neither has ever generated much intermediate business. Once upon a time, the predecessor of router 6, then numbered 10, carried good numbers between Newport and Blackgang, but, as we saw earlier, that business has all but disappeared.
Blackgang to Newport 2021 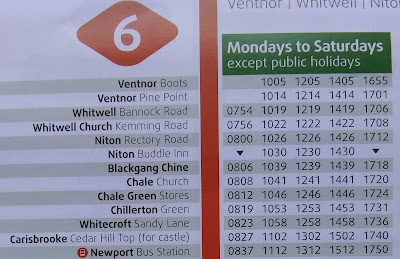 Just six buses a day ply the route nowadays, just enough to get you from Newport to Blackgang and back - if, that is, you don't wasnt to go anywhere else on that day!
It is a gladdening thought that MOST of the "main road" bus routes are the same or better frequencies than in 1997 - but 25 years or so has robbed many communities away from the main routes of any bus service at all.
Once again we see the consequences of running buses for the shareholders rather than for the community.
Tomorrow we go to the western, and quieter, end of the Island.
Next Then and Now blog : Friday 18th June
Posted by fatbusbloke at 02:00