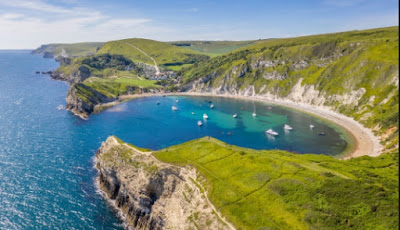 Looking back over the years, you would not say that buses to Lulworth and its famous cover were particularly frequent. Coach tours were regular visitors and have been for aeons ... 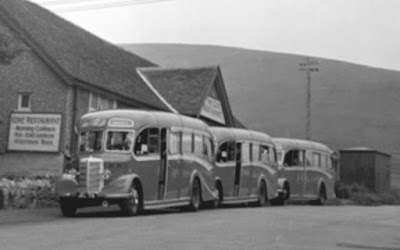 ... as here in the hands of Hants and Dorset. 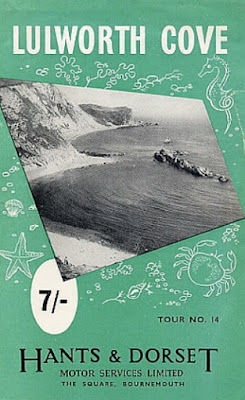 But ordinary buses have struggled to make a go of a service Lulworth. Here is a route 30 which looks fine from the publicity ... 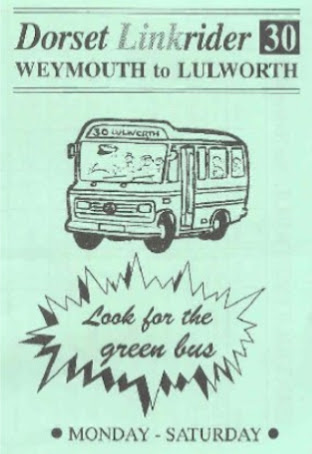 Indeed just a green minibus was all that was on offer. 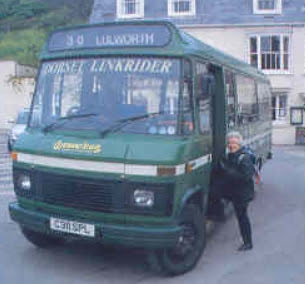 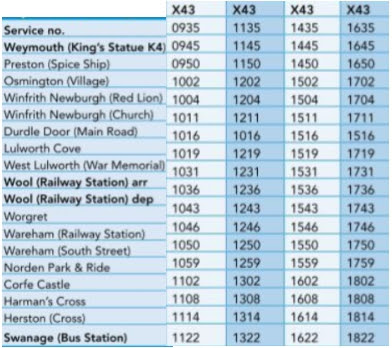 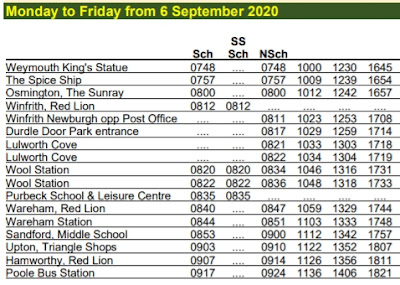 The somewhat better summer X54 was paralleled by Go Ahead Damory 30 ... 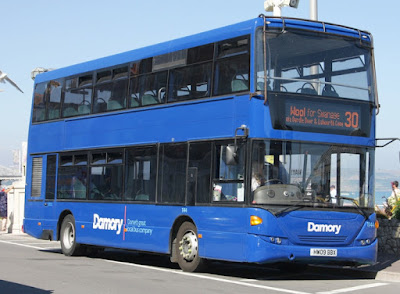 ... such that when fbb was last lingering in Wool, the two operators were travelling close together, both on a two-hourly frequency - and neither was notably busy! 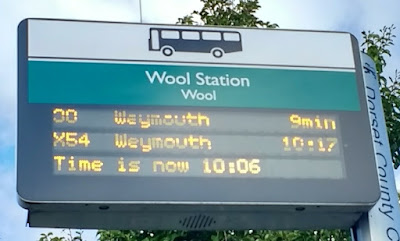 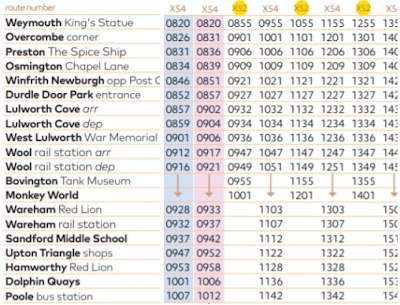 ... running hourly via Lulworth Cove to Wool with X54s continuing to Poole and X52s (open top) to Bovington and Money World. So we have a remarkable hourly service to Lulworth Cove from Weymouth from First Bus.
Roger French was out and about on the X52 on Sunday last. He found Jurassic leaflets ... 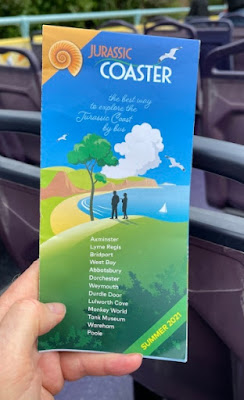 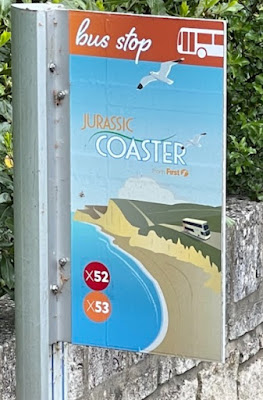 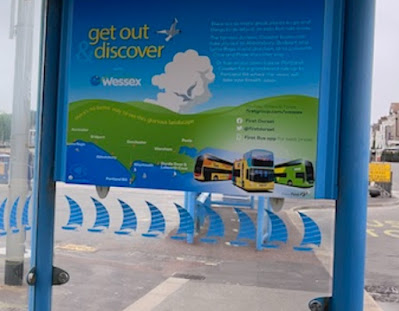 ... and (say it quietly) passengers on the bus! 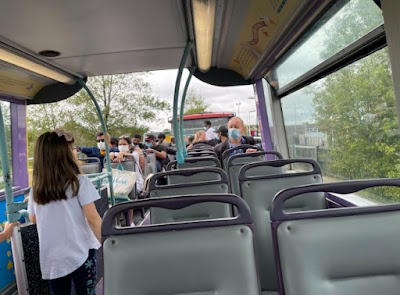 But what is that red double decker appearing behind the X52?
Bravely Rog rode the full route from Bridport to Monkey World noting that on his return working he was delayed by the level crossing at Wool - always a fun experience when summer traffic is around!

He takes up the story ...
There were about 20 waiting at Wool Station. Interestingly a ‘more’ (Go Ahead) operated bus on their Purbeck Breezer branded route 30 pulled into the stop behind us while we were loading up and I realised why our driver had enticed them all on board and they’d looked rather reluctant, as they’d obviously planned to get the 30 which had a more convenient connection time between the train and bus at 12:22 (than our scheduled 12:11 – the train had arrived at 12:10).
So it looks as if the 30 and the X52 are travelling together on much the same route.
But oddly ... 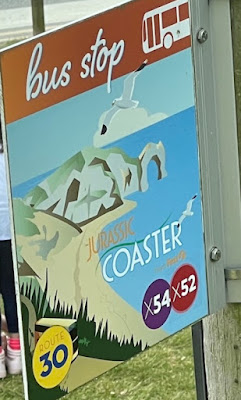 ... the competitors both appear on First's flags. Friends or foes? Or have More Bus secretive staff surreptitiously stuck stickers on First's flamboyant flags?
So, tomorrow we will look at the 30 in more detail and explore the whole Purbeck Breezer network.
It is impressive!
One really daft thing that Roger unearthed concerns one of these. 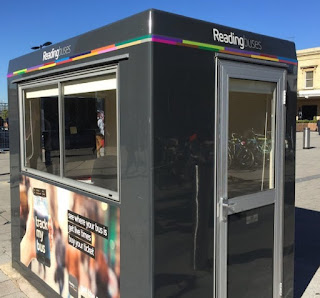 Apparently First Wessex wanted one of these on the seafront near the Kings Statue at Weymouth but the Town Council, always anxious to encourage tourism (???) has refused planning permission. Apparently the council was concerned about blocking the footpath. As you can see space is very tight near the bus stops! 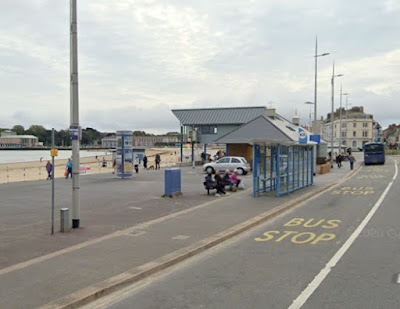 Mind you, First have a splendid travel shop right outside the station ... 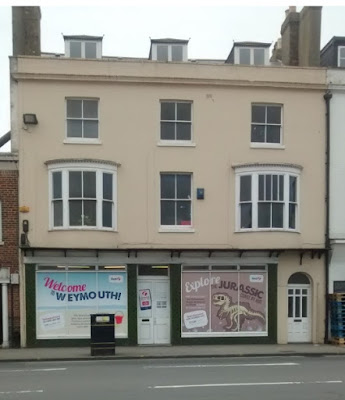 ... but that is bolted and barred.
In passing, who runs the train station? Oh, yes; that's South Western Railway. And who runs SWR? Would that be First Group? And is there lots of First Wessex bus publicity available in the station?
Guess!
So, tomorrow, we Breeze around the Isle of Purbeck.
P.S. It isn't an Island!
See Scenery Structure Set-up!

fbb has finally "taken the plunge" and installed a background "cyclorama" on the Peterville Quarry layout. When it is finished (when all the gaps are filled), the old man dons his felt tip (?) grasps his palette and brushes and creates a glorious backscene for the model. 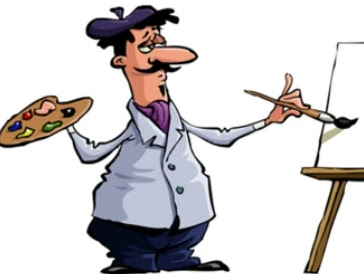 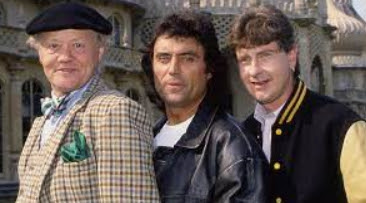 ... entered an Artists' Requisites emporium and asked for a "Felt Tip" which was duly handed over by the sales person. It was a replacement hat!
Next More Breezer blog : Thursday 10th June
Posted by fatbusbloke at 02:00