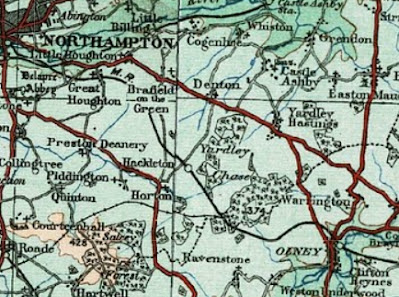 Above, Northampton to Olney with Piddington Station bang in the centre. Below, Olney to Bedford with Turvey Station also in the middle of the map. 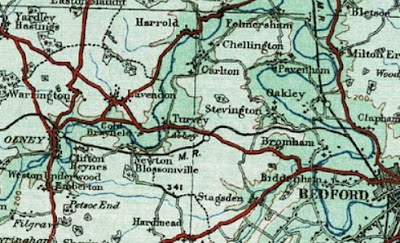 It is obvious that there are no large communities between Northampton and Bedford, although a light rail line might stop at Great Houghton (top map top left) and a Stevington/Bromham Park and Ride (bottom map centre right). It is hard to see where else passengers might come from.
A cursory exploration of the line reveals that almost all the bridges (over and under) have been demolished.
At Great Houghton the bridge under High Street has long gone ... 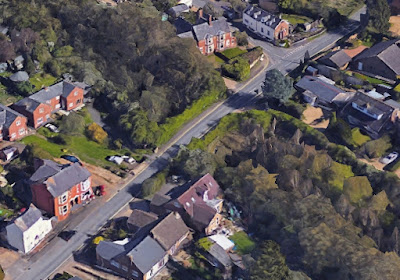 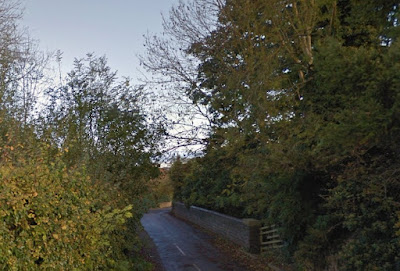 Thew bridge over the road near what used to be the Stock Car Stadium near Horton has been removed ... 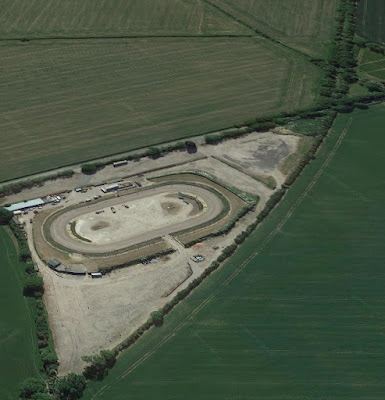 ... as has the road crossing near the remote Piddington station which is nowhere near Piddington.
And so on to Olney where the bridge over the Wellingborough Road has gone. Even worse, there is now a much bigger gap as a roundabout stands on the very spot. 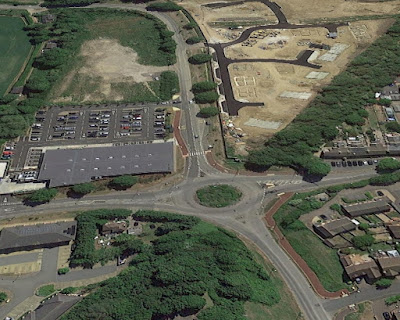 A substantial (and expensive) mini viaduct would be needed. There is, however, a splendid green "green" name for the town on the remnants of one of the embankments. 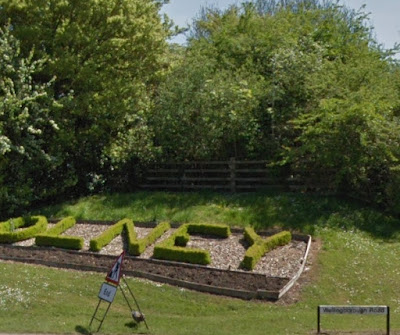 But the big snag at Olney is that the station site has been built on. A pleasant estate of houses fills the whole area including where the track once ran. 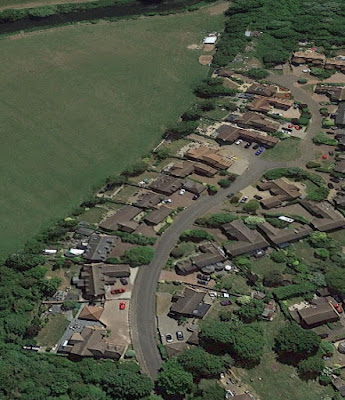 Building a small diversion would be easy - if you had the money!
Next comes the River Great Ouse and, surprise, surprise ... 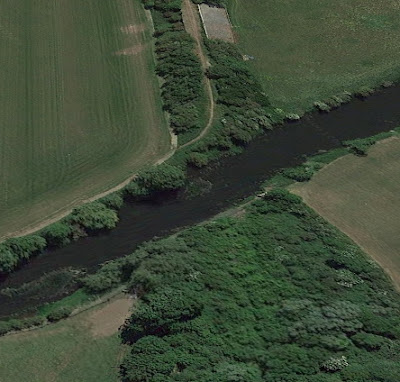 ... new bridge needed. The A428 near Turvey would need yet another new bridge.
One or two "back roads" still have their bridges, one filled in ... 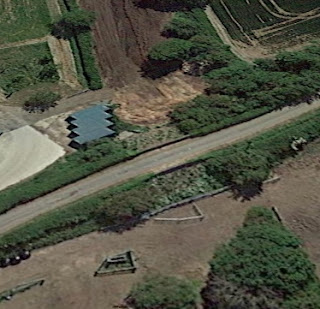 ... and some others extant but well undergrowth encrusted. Who knows what state they are in and how much work will be needed to make them train-worthy. 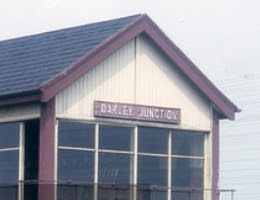 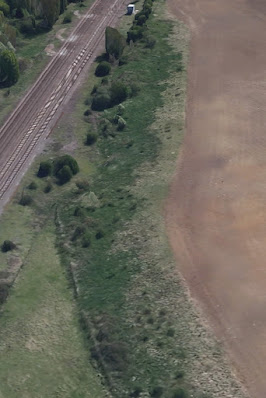 ... whence you have to find paths on the Midland main line to get into Bedford Midland Road station. 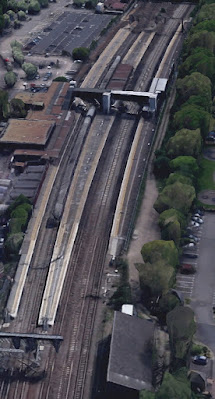 We are looking south in the above Google Earth extract and there is no north facing bay. With capacity on the main line being tight, you might think that an extra track and a new bay platform on the right (west) of the main lines might be needed.
The simple question for campaign group E R T A is this. The line was never busy; it carried little or no freight and, frankly, few passengers. Is there a justification for re-opening at vast expense?
The bus is slow and hourly, hardly attractive to passengers aiming to ride all the way ... 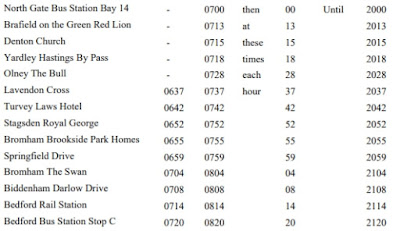 If we are really serious about our carbon emissions, then anything which gets cars off the road should be worth considering; BUT ...
Will those who foot the bill (and that is us, passengers and taxpayers) appreciate the financial burden of this re-opening.
fbb would love to take a train ride along this line (he never did when it was open), but reckons that the best he, and those who follow in his tottery footsteps, can do is ride Stagecoach route 41. 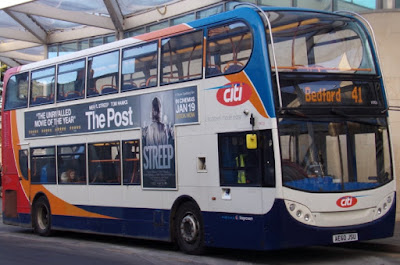 It is a pleasant ride, albeit a slow one!
And Now The Bad News

Wightlink run ferries from the mainland to the Isle of Wight, an hourly passenger service from Portsmouth Harbour station to Ryde Pier Head and car ferries between Yarmouth and Lymington and between Portsmouth and Fishbourne.
When the company introduced its summer schedules it came up with a different sort of cunning plan. They would run every 40 minutes rather than hourly with extras. This would still require three boats and three boats is what they had.
Saint Faith ...

... which is the last remaining "Saint" class vessel, the fleet of which has been the mainstay of the Fishbourne Route for many a long year.
St Clare ...

... known affectionately as The Pride of Poland - it was bought from Poland, half built, when its original purchaser decided not to purchase. It is much bigger than St Faith.
Victoria of Wight ... 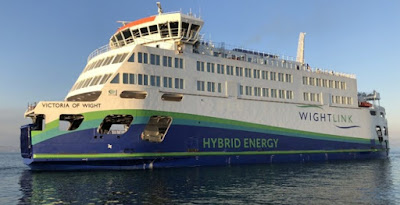 ... which is huge and technically advanced having some sort of hybrid drive.
When the last-but-one of the Saints was sold, the obvious question was asked, namely, what would happen to the three boat service if one of the boats went phut. Worry not, the Wightlink PR machine purred gently, we will use the spare boat from the Lymington run. Seemples.
There is a spare boat at Lymington because Wightlink bought three ...

... but then decided, for various reasons, they only needed two.
So Victoria of Wight broke down. 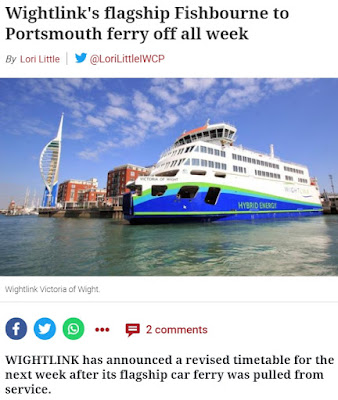 All week? Actually still off for at least another month.
The rumours are that there is something wrong with one of the engines.

According to a usually reliable source, the engine is very busted indeed and, even with all the super smashing technology, the remaining engine is not enough to haul its great bulk across the Solent.
But, we hear you cry, did they not say that they could use one of the three Lymington boats. Indeed they did, but, well  I never, what a surprise, oh mercy me, they don't have any spare staff trained on the Lymington boats to drive one from Portsmouth the Fishbourne.
So it is rumoured.
So every 80 minutes in the timetable cycle one vessel, and it is the biggest, is simply not running. This means that those unfortunates souls (and there are lots of them - it's the biggest boat, remember) are moved to "other sailings".
To "reduce the inconvenience" the service is running all through the night at weekends.
If you are booked on Vicky, you could be moved earlier or later and almost certainly greatly inconvenienced.
Will you get compensation? No doubt the small print says that the Company cannot guarantee that boats will run as advertised. Too right!
Will you get a free cup of coffee? No, the cafes are closed because people were buying a cup of coffee and making it last the whole crossing so they did not have to wear a face covering!
Memo to Wightlink. Could you buy one of the "disposed of" Saint class back? Or maybe start training staff for the Lymington spare as a matter of urgency. One spare between the two routes ought to be enough?
Surely?
Meanwhile, staff at Red Funnel, on the Southampton to Cowes Route ...... are full of sympathy!
Next Variety blog : Saturday 26th June
Posted by fatbusbloke at 02:00