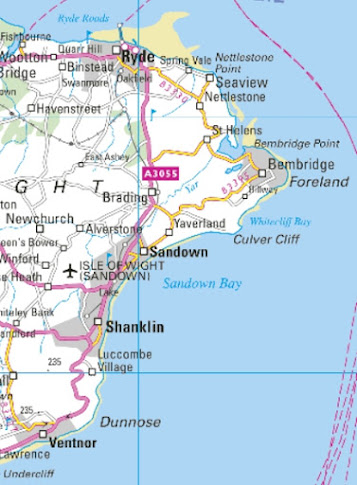 The main holiday resorts of the Isle of Wight have always been strung out on a north-south axis at the Eastern end of the Island. the best beaches are at Ryde, Sandown and Shanklin with Ventnor being a little quieter and suffering, possibly, from being built on a cliff!
The Bembridge promontory is a strange mixture of posh "yotties" in a mix with camp sites, caravan sites and a selection of holiday parks.
It is not surprising, then, to realise that the busiest bus route ran from Ryde to Ventnor and on the the famous Blackgang Chine. 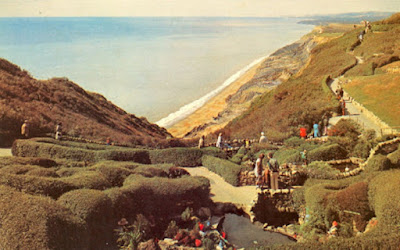 Many decades ago, the gardens stretched almost to the beach, but erosion has taken away almost all of the original cleft in the cliff and the "entertainment" have retreated further in land. 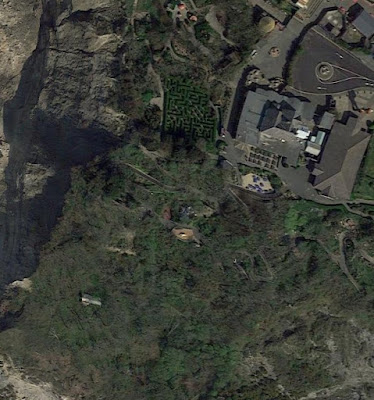 You can just glimpse some of the paths that used to take customers to a whole range of delights tucked away in the undergrowth. 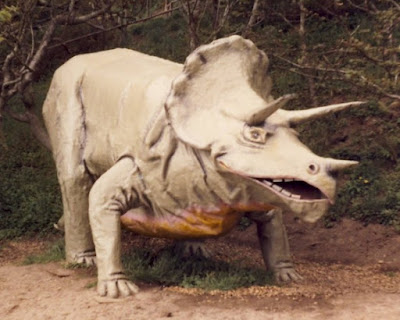 The Chine has also lost some of its supremacy as the "must visit" destination; so the heady days of buses every 10 minutes (service 16) with at least four an hour running on from Ventnor to Blackgang are long gone. Fewer people now come by train, thus more by car and there are far more "places of interest" to attract a more discerning tourist.
So in 1997 Blackgang managed three buses an hour in the morning, dropping to just two once the main daily not-much-of-a-rush was over! 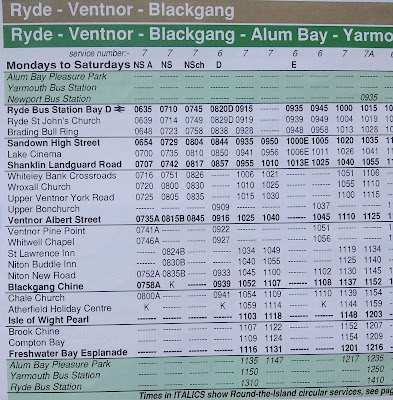 Route 7 (GREEN) is part of the giant "round the Island" circular which we have already met providing buses between Newport and Ryde via Havenstreet. 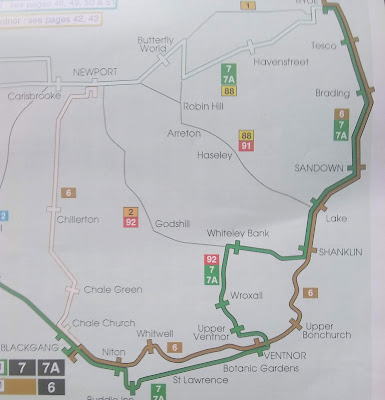 Service 6 (BROWN) followed the traditional; "main line" route via  Bonchurch, but only hourly. 7/7A journeys ran via Wroxall, also hourly for most of the day.
How the mighty have fallen!
The route via Wroxall rose to great fame and high frequency after the electrification of the railway line from Ryde to Shanklin. The section between Shanklin and Ventnor was covered by service 39 bus which connected with every train! 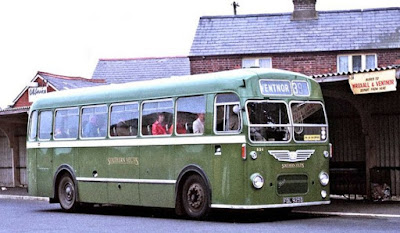 The former train link became an hourly route 36 as part of the "main line" 16, and in 1997 remains as (mostly) an hourly 7/7A.
We should mention the route via Bembridge, most definitely a long way round as many an unwary visitor found as they caught a bus from Sandown to Ryde and found the journey was taking an hour instead of the expected 20 minutes!
In 1997 this was part of the big ORANGE service 1, running every 30 minutes. 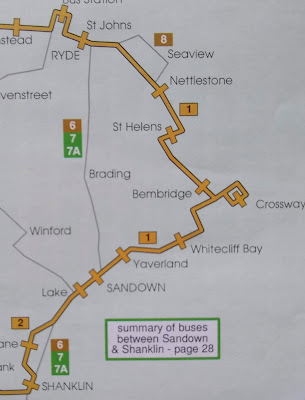 In passing, mention should be made of routes between Sandown, Lake and Shanklin. Once upon a time everything ran via the main road (RED) ... 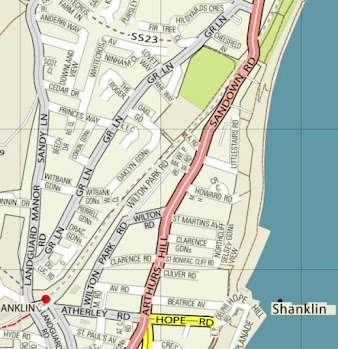 ... whilst a local bus trundled from Shanklin Bus Station (as was) up GRN LN (translated as Green Lane - GREY) to Oaklyn Gardens. 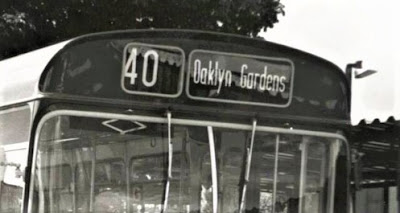 By 1997 the local shuttle was long gone and Green Lane was part of the main routes. 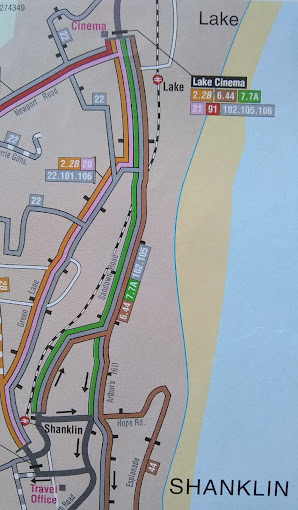 Green Lane is now part of the Big ORANGE and the main Sandown Road served by 6 (BROWN),7 and 7A (GREEN).
Beside The Seaside 2021
A look at today's map shows a whole raft of changes. 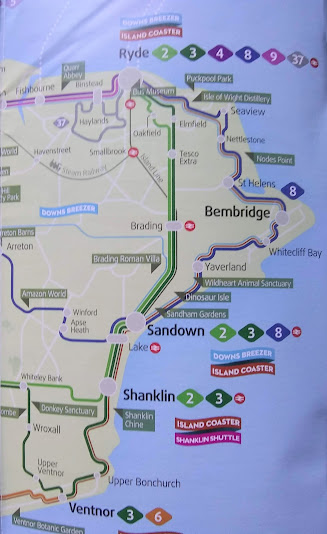 The route via Bembridge has reverted to its traditional number as service 8 (DARK BLUE). But frequency is now down to hourly ...

Back in days of old, the 8 ran at least every 15 minutes, and the decline is a direct result of the change from "bucket and spade" happy campers to more "sophisticated" (?) motor car visitors!
On the main road, route 2 (LIGHT GREEN) runs every half hour between Ryde and Shanklin ...

... whilst route 3 (DARK GREEN) continues, also half hourly, to Ventnor. 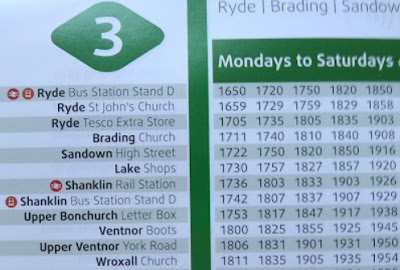 The 3 still provides a link to the once-rail-served Wroxall, but now requires the weary traveller to ride via Ventnor  rather that direct via the good old 39. 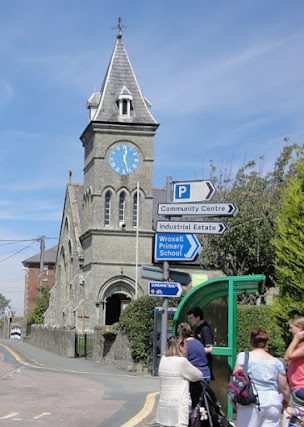 But all year round services via the main road are generally better that 1997. There is a co-ordinated bus every 15 minutes between Ryde and Shanklin, going forward every half an hour to Ventnor.
At this stage we need to understand that all three of these routes now find their way to Newport and will form the next part of this magnum opus.
And Blackgang? 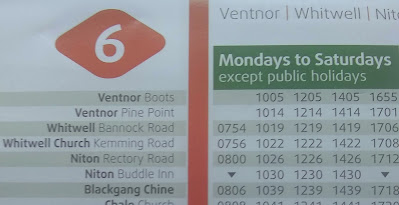 It still has number 6, but there are no equivalents to the 7/7A, leaving just four journeys from Ventnor which also continue to Newport. 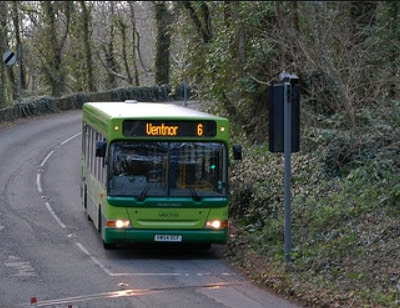 There won't be queues at Blackgang like there were long ago for the 16! 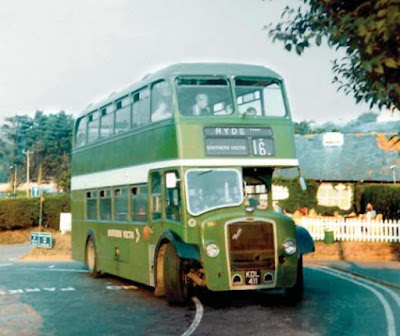 Next then and Now blog : Thursday 17th June
Posted by fatbusbloke at 02:00