She Should Talk To Grant? That's Alice! By some typical interwebnet weirdness, she has sent a note to Mrs fbb.

Now what exactly do you mean, Alice? 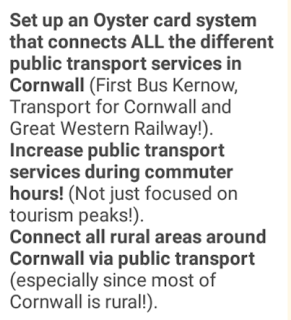 Aha! Alice has heard of Transport for Cornwall; but does she realise that its wondrous new network is doing exactly what she wants? There are loads of empty red buses running on routes long since abandoned by the "commercial sector". Coming soon is a reduced fares scheme paid for by people, most of whom do NOT live in Cornwall (a k a Taxpayers).
Does she understand that an "Oyster Card" (ordinary Bank Card is easier) does not improve public transport at all but it does make it easier to pay; and much easier for the fares to rise without anyone noticing.
But the big question for Alice is this, "Are you happy to see a substantial increase in your personal tax bill to pay for it? There is no "them" to pay the bills, only "us"!!
The chief transport officer for the county responded unhelpfully as did HMG ... 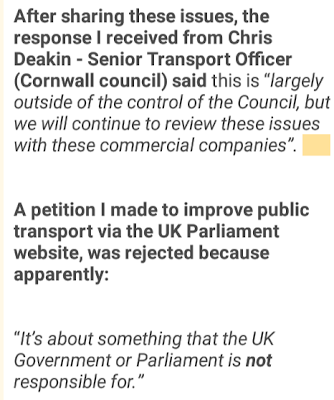 Perhaps Alice need to chat to Baroness Vere (Minster of Buses this week) who thinks Public Transport in Cornwall is tip-top OR, maybe, to Grant Shapps who is going to "join up" all the buses to offer frequent schedules so that "no one will need a timetable; you just turn up and go!" 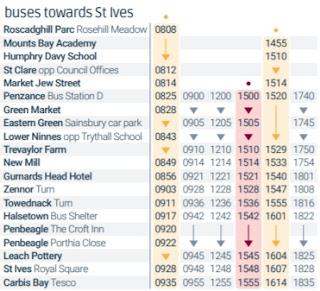 The crowds will soon be flocking from New Mill if the Baroness Minister, The Minister Minister and Alice have their way. 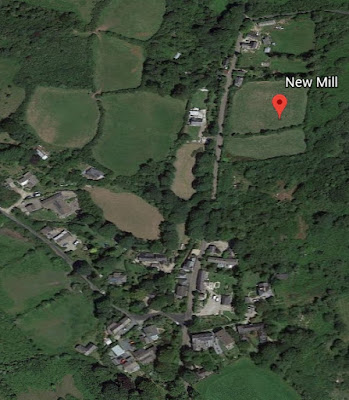 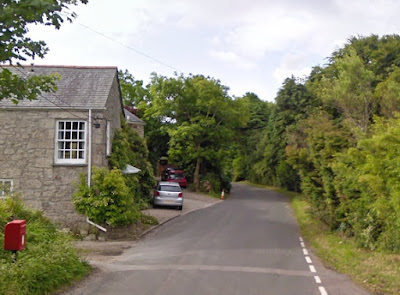 Perhaps Transport for Cornwall have planted same since Google gurgled past?
Mr Tubbles has the right idea. 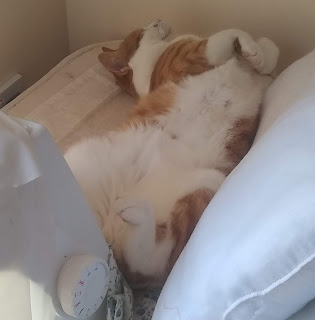 He is giving the matter some thought.
Reading Riding For Free 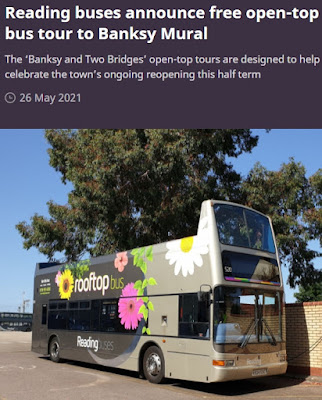 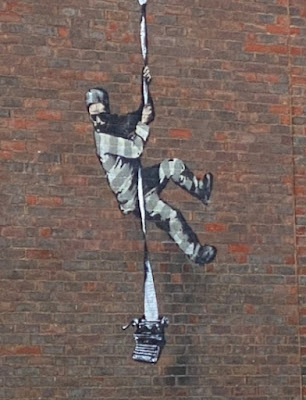 Apparently it is Oscar Wilde ... 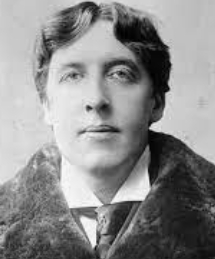 ... escaping from Reading Gaol with the typewriter he nicked from the Governor's office. Is it a good likeness? It is, of course, painted on the wall of Her Majesty's free hotel in the town. 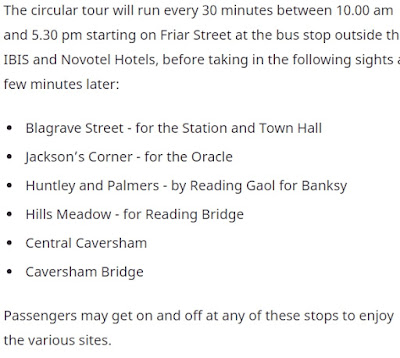 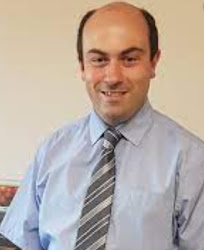 ... and his gang for coming up with an innovative way to replace their annual open day, also for charity.
The Coastline At Skipton & Ilkley 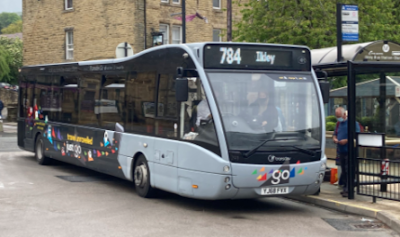 One of the oddities of today's illogical world of public transport is the way the tendering system works. fbb remembers that, in the very early days of bus deregulation, East Midland buses won a tender in Essex, somewhat distant from HQ in Chesterfield.
East Midland never admitted that it was a mistake, neither did they claim an opportunity for expansion. It didn't last.
But the snap above was twittered together with enthusiasm for the picturesque qualities of route 784. 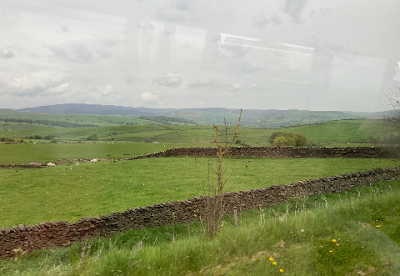 It is operated by Coastliner ...

... every hour with a positioning journey from and to Otley. 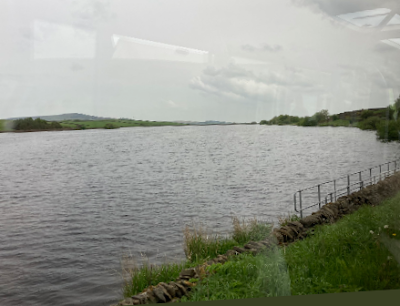 The lake is Chelker Reservoir but ... 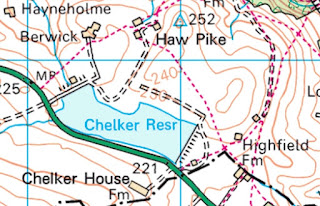 ... lakes don't usually have a coast.
The Otley journeys suggest an explanation. It is near the depot set up by Transdev to run the Flyer services A1, A2 and A3 to Leeds/Bradford Airport. 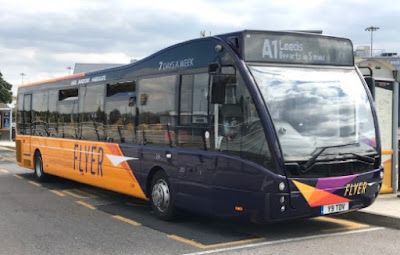 Coastline is based in Malton which is not very near to Ilkley or Skipton. There is no mention of the 784 on the Coastline web site - understandable because it is irrelevant.
The 784 has its origins in First Bus X84 ... 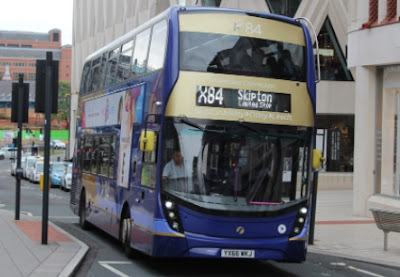 ... with the occasional extensions from Otley to Skipton being unhooked and renumbered 784. 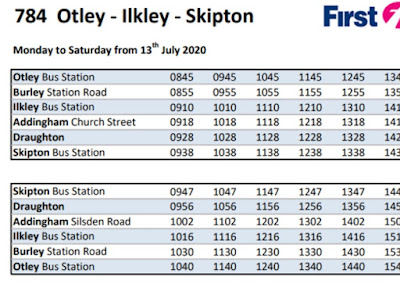 First pulled out of the 784 and Transdev stepped in ... 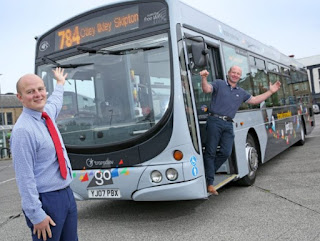 ... as sort-of reported by Route One magazine.
Transdev took over former First West Yorkshire service 784 between Skipton, Ilkley and Otley from Monday 5 October. It is operated as part of The Keighley Bus Company’s network from Transdev’s recently opened base in Idle, Bradford.
Se we need to look for the timetable on the Keighley Bus Company web site ... 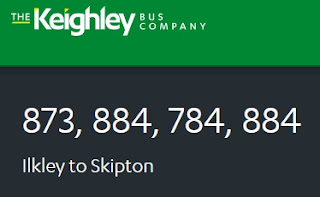 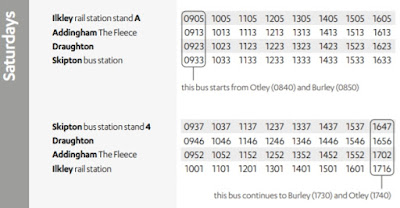 On Sundays, the link is provided by the 873, the 884, and not forgetting the 884.
fbb would bet (if he were a betting man) a bag of toffees and a shiny penny that Coastliner had nothing to do with the 784, except adding their name on the registrations.
Maybe fbb should ring up Coastliner and ask for times of their 784 bus route?
And, Talking Of Politics ... 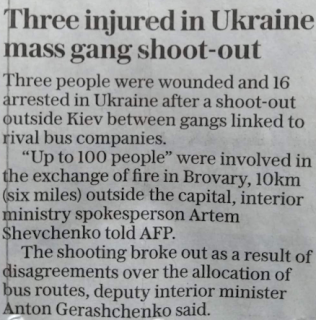 It might not be safe on the streets of Cornwall as the Kernow Klan shape up to the TfC Toughies. 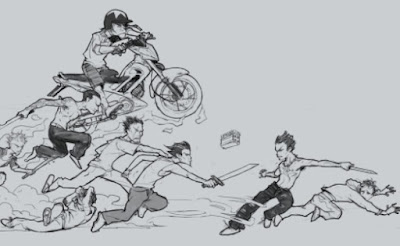