Newport : To Ride To Ryde

Leaving the Island's county town and travelling eastwards, the road signs would take you via the A3045 but offer a right hander to Bembridge. Coming from Ryde, the equivalent left hander at The Cedars, Wootton is signed for Sandown. 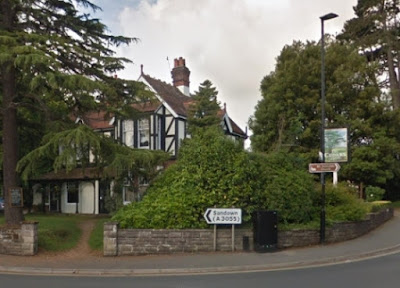 But locals know that there are two ways to Newport; via the Racecourse at Whippingham (A3054) ... 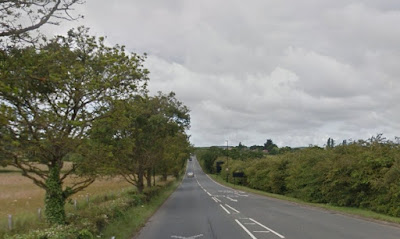 ... or via Staplers** where new housing adorns a splendid sausage-about.

To this day, islanders hotly debate the benefits of each route. 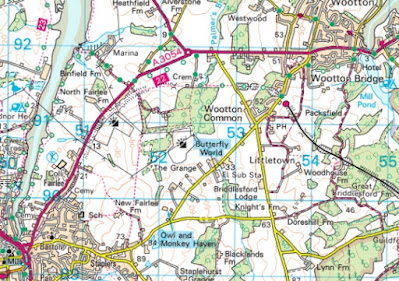 Historically, Southern Vectis route 1 ran via the A3054 (RED) and 1A via Staplers (YELLOW). 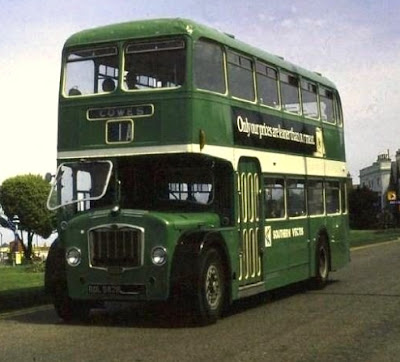 Frequencies were half hourly on each giving four buses between Ryde, Newport and Cowes every hour.
Newport To Ryde 1997 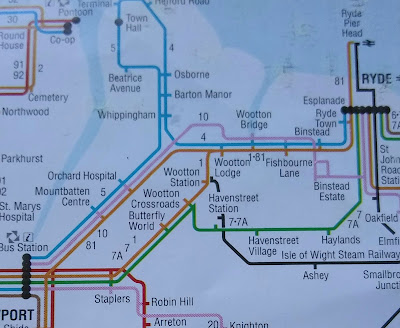 It looks quite different in 1997. We have already met route 1 (The Big ORANGE) in yesterday's blog. This preserves the standard 30 minute headway via Staplers ... 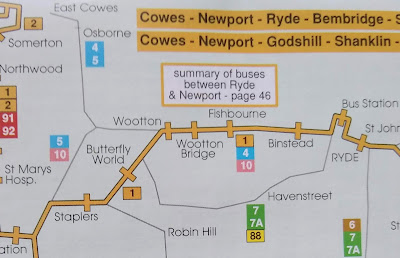 ... and the 4/5 via East Cowes (BLUE) would not normally be used by through passengers between the two big towns. 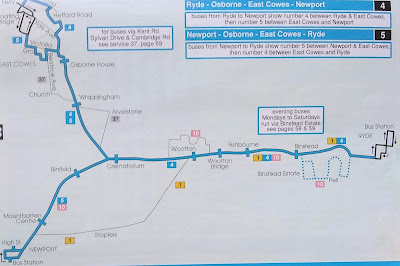 This leaves service 10 (PINK) via the A3054. This always was a poor replacement for the original half hourly route because it only runs hourly ...

.... and involves a lengthy diversion via the Binstead Estate a k a Pell Lane at Ryde ... 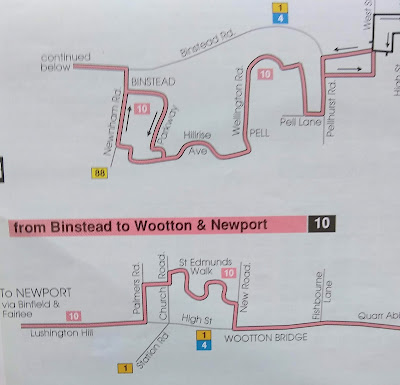 ... and a second delaying wiggle via St Edmunds Walk at Wootton. The Pell and Binstead housing was the first area to benefit from the bread-van minibus craze, named Wanderer. 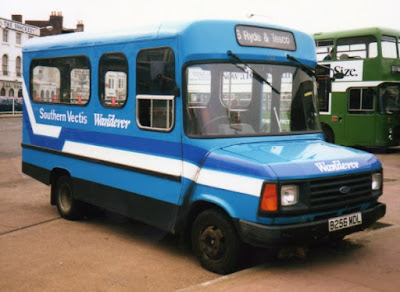 Service 10 in 1997 has a 15 minute frequency with bigger small buses whereas the Wanderers started off at every 10. 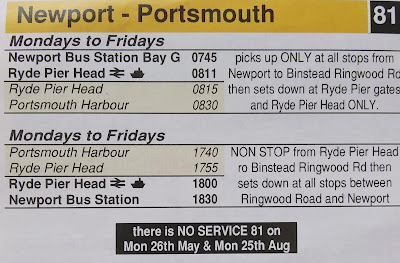 This single return trip was the vestige of an attempt by Southern Vectis to emulate the success of the Hydrobus link to Southampton by taking folk from Newport to Ryde Pier head and beyond. It failed! As did a similar service run for Wightlink by one Marc Morgan Huws, now with First Kernow.
There was a fourth bus every hour on route 7/7A (GREEN). 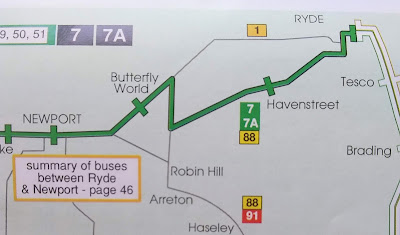 This ran via Havenstreet and was part of a "round the island" circular which was really hard to show in the fbb created timetable book. 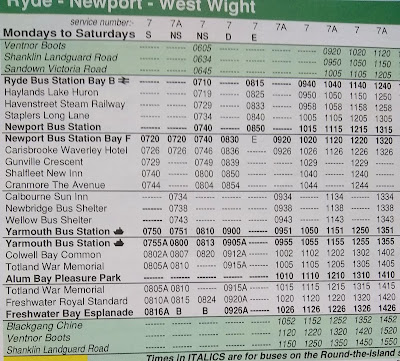 It was shown in two halves and forms part of a future blog in this series.
So in 1997 there were still four buses every hour but two of them were significantly slower that the "traditional" service 1.
Newport To Ryde 2021 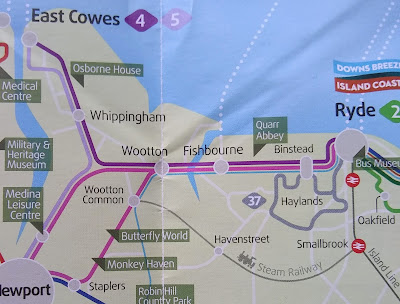 Even the least observant bus watchers will spot that it is very different. The 4 and 5 to East Cowes do look the same but the Newport to Ryde route (MAGENTA) has changed. We know that it is split off from the 1 (etc) to Cowes and we can see that it is now numbered 9. But in a "back to the future" move, 9s run alternately via Staplers ... 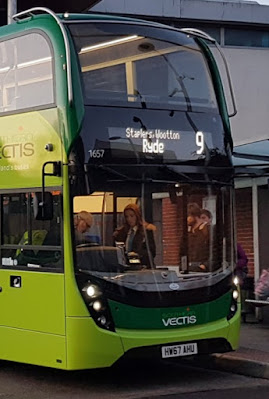 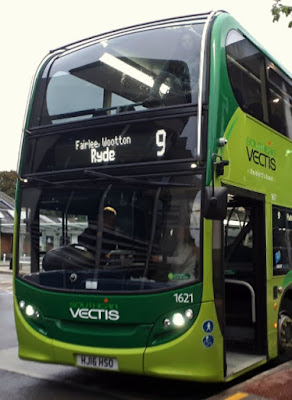 But notably each route runs every TWENTY minutes, giving a service 9 every 10, far better even than the old 1/1A! 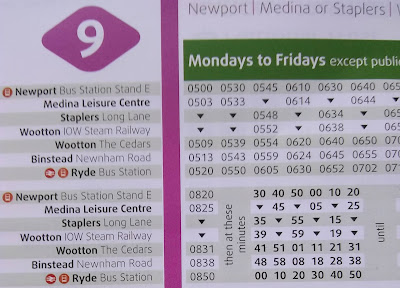 But there are now no buses at all via Havenstreet! 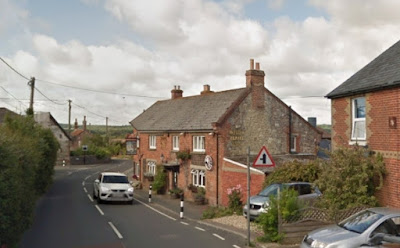 This delightful village, also headquarters of the Isle of Wight Steam Railway ... 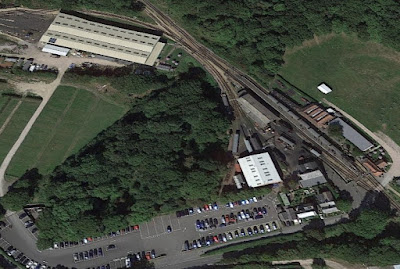 ... has no public transport at all. Although you need to go by car, the White Hart (as shown above) does a VERY good lunch! 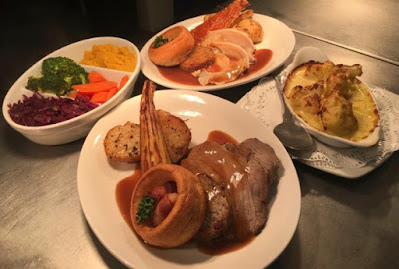 It is here that the fbbs are often fed and watered in the company of our senior Isle of Wight correspondent and his significant other! 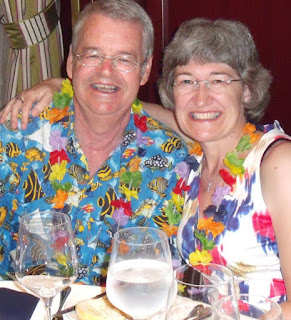 His taste in subdued and appropriate apparel is legendary!
Tomorrow, we travel to Sandown and Shanklin.
Snippet - And Whoops! 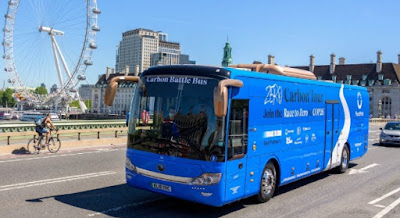 The Zero Carbon Battle Bus is campaigning for zero carbon (there is a clue in the name!) throughout the UK. And, as you might expect, it popped up in Cornwall ... 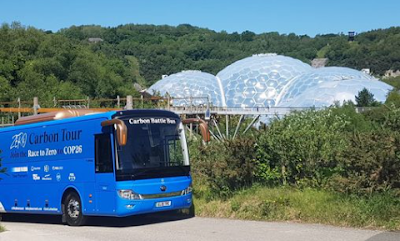 ... at the very time that a few international celebs were having a bit of a chat on that very subject just up the road at Carbis Bay.
But, there was a snag! 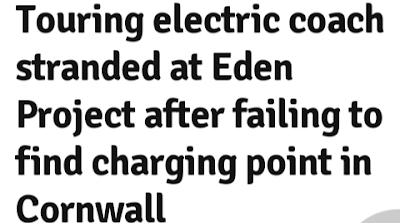 It simply couldn't "fill up"!

In a way, it drew the media's attention to the problems with the much-vaunted environmental desire for plug-in vehicles.
You do need a plug ... 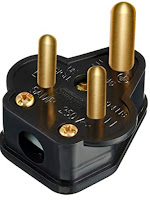 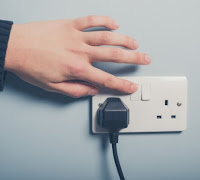 fbb thinks they found a solution! 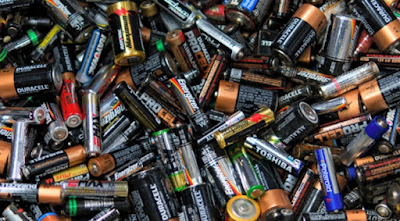 ** IMPORTANT NOTE : Staplers is NOT pronounced as you would utter some pieces of office equipment. It is "stap" as in "trap", NOT "stape" as in "tape".
Next "Then and Now" blog : Wednesday 16th June
Posted by fatbusbloke at 02:00