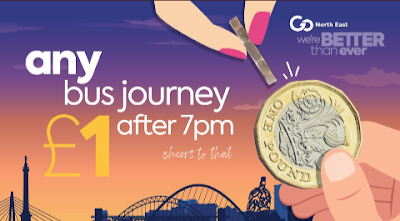 We all know that evening travel by bus has slowly but inexorably declined to the extent that evening services are now pretty much non-existent outside of urban areas - and headways are a bit thin even there. fbb well remembers a Sheffield Transport manager, way back in the late 1960s, bemoaning the fact that "it's hardly worth running buses until the pubs turn out".
Rebuilding bus services is going to be difficult, especially as officialdom had done its darnedest to persuade passengers that instant death will be an obvious consequence of a bus ride!
So Go Ahead in the north east has gone ahead with the above cunning plan. Boss Martijn Gilbert is enthusiastic ... 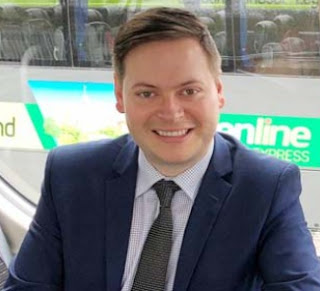 ... although, to be fair, it would be unusual to issue a press release saying, "my plan was an utter disaster." This is what he did twit:- 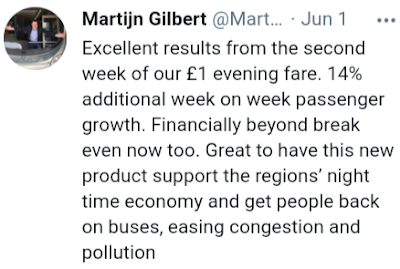 fbb is not sure that a few extra pax on evening buses will do a great deal for pollution or congestion and, whilst 14% sounds impressive, without definitive statistics we cannot really judge its success. 14% of 10 passengers is less than 1.5 and surely he doesn't mean that evening revenue overall is at a break even point?
Maybe he means that the 14% extra bums on seats is bringing in as much money (i.e. not much) as was clattering into the piggy bank BEFORE that reduced £1 fare was introduced.
Too early to tell.
But there is a germ of an idea.
If Minister Shapps wants to encourage chaps (and chapesses) to go back to the bus, why not up the Government sub a tad and offer everybody half fare until, say the end of August. The results might surprise everyone.
Meanwhile On The Railways
One of the headlines on the Great Britsh Railways press release (although it had nothing to do with the Williams/Shapps "strategy") was to make available season tickets for less than weekly or monthly use. 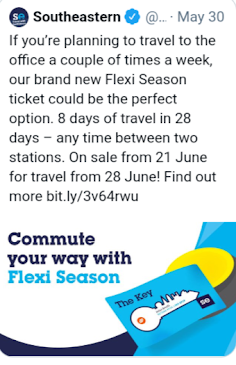 Not such a big deal. How if you are travelling three days a week? There is a huge panel on the home page of the company web site. 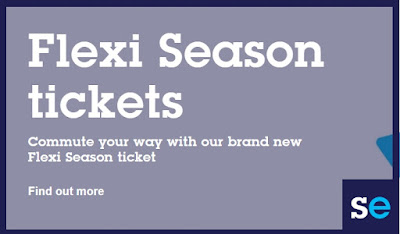 BUT ...
You’ll get 8 undated one day passes, giving you total freedom to choose when you travel, exclusively available on our contactless smartcard, The Key. Register for your Key smartcard now so you’re ready to commute your way.
... despite the hype, you need a "Key" smart card AND, when you scroll through the lengthy set of FAQs ...

... you find it isn't quite as Flexi as it ought to be.
Why not simply sell a "carnet" of actual tickets for travel at any time. Aaagh, that would be too simple and you might lose a bit of revenue now and then.
And if you don'y use up all your 8 journeys in 28 days you have to APPLY for a refund and it will cost you £10 to get it.
Why can't the 8 journeys be valid for ever?
And its get worse. 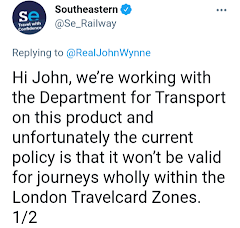 If your Southeastern journey is wholly within the Transport for London Zones 1 an 2, e.g. a really obscure run from New Cross to Charing Cross on the dotty blue line ... 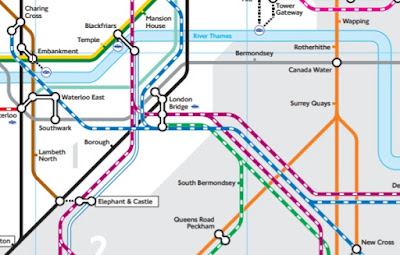 ... you cannot buy one at all.
Thanks a bunch Mr Shapps.
Why make it simple when you can make it unfathomably complicated?
Outdated At Oxford
A Twitterer spotted this on his Oxford local bus. 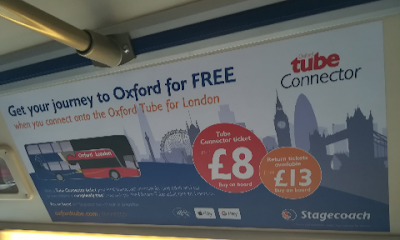 He said that the children go free offer was no longer available. If you look VERY closely you cna just about make out mention of children. 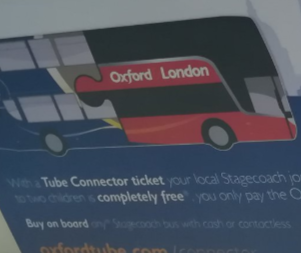 fbb does not think children go "completely free" all the way to London or maybe they do - or more correctly did. Either way the tweet tells it readers that they don't any more and the car card should have been removed.
Edinburgh Tours Check List
fbb had a quick look at the confusing prices offered for a tour of Edinburgh, £8 if the bus is yellow and £16 if the bus is red. No change since the recent blog on the matter.
And it is still twice as expensive with one child ...

... on the brightly coloured Bright Bus (First Bus in an orange skin!). 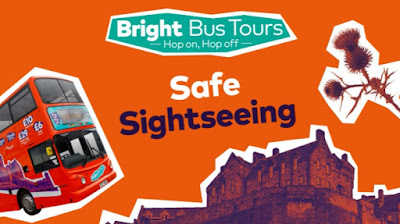 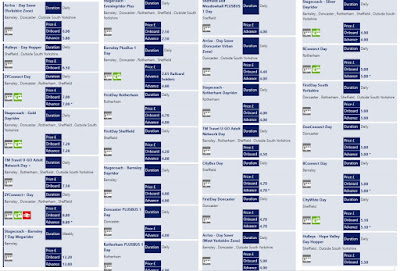 Above is an illegible paste up of 28 tickets (those valid for one day) available to residents of South Yotkshire of which no less that 13 can be used in Sheffield. For those blog readers (mayhap small in mumber?) who are interested in the detail, the panel can be enlarged with one click.
Is this REALLY the way in which the industry is aiming to attract the motorists out of their cars and on to a pollution reducing, congestion reducing, stress reducing (?) bus?
The problem is that each operating company has its ideas as to how to keep the passenger on their routes. Surely it would be simpler if there was some sort of joint company owned by all the existing operators that marketed a set of multi-operator "rover" tickets?
Ironically, there is!
It is called "Travel Master". 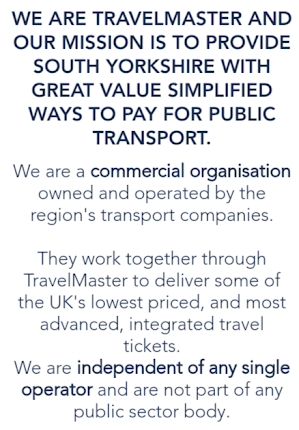 But every ticket they sell is more expensive that any operator's ticket. And ... 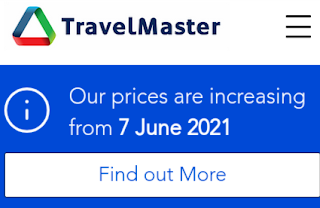 Travelmaster prices are going up from Monday next, so will be even more expensive than operator only tickets.
But this is weird. The operators are not allowed to change their fares as part of the bail-out deal with HMG. But, it appears, Travelmaster is not an operator of buses so receives to Covid subsidy - so they CAN increase fares.
A small but significant fares increase via the back door.
But why, pray, does Travelmaster have to charge more than any one operator.

And why does a day's travel cost 40p more in the smaller towns than in Sheffield? And why does the Travelmaster cost 50p more if you want to use a tram as part of your travel. (City Wide with tram £5.30, City Bus without tram £4.90).
The reason is simple. The operating companies charge different prices for these different combinations of service area and they wouldn't tolerate a loss of even a penny of revenue.
And why do we have a South Yorkshire connect at £7.40 and a South Yorkshire Connect + (plus!) at £9.20?
Travelmaster are anxious to explain what good value they are; and generally how lovely they are. 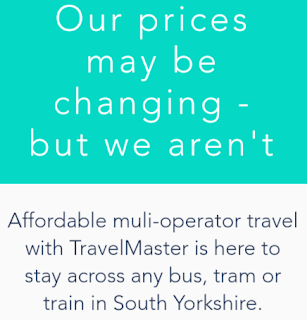 Do people actually CARE how their prices compare with other areas.

Some of Travelmaster's comparisons with other purchases are dodgy in the extreme. 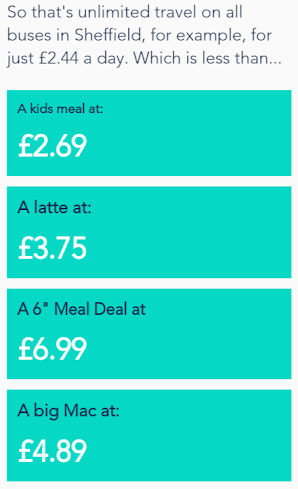 Of course, it is only £2.44 a day if you use your ticket every day of the month (unlikely?) and, were fbb still young enough to be caring for his children, he would wonder where a "kids meal" might be only £2.69.
Even the old crock fbb knows what a "latte" is (milky coffee); he has even been known to nosh a "Big Mac". A Big Mac is £3.19, by the way, NOT £4.89 which is a "Big Mac meal".
A latte at McDonalds is usually less than £2.
fbb cannot fathom what a 6" Meal Deal is - but the youff of today may know! (STOP PRESS - see below)
But these comparisons are pointless. "What shall we do today, daddy?" "Well, Torquil, you can either ride on buses all day OR have a 6" Meal Deal"
What would make sense for South Yorkshire would be a very simple zonal fares structure based on the four towns and the Peak District. Possible day prices are shown below.
One zone
(one of Barnsley, Doncaster, Rotherham, Sheffield, Peak District)
£4.50
Two zones
£6.00
Three or more zones
£7.50
All operators sell them and keep the revenue. It would all work out in the wash in the end and might, just might, attract more customers to bus travel.
STOP PRESS
After hours of patient research on-line, fbb has discovered that a six inch meal deal MIGHT be a "sub" ... 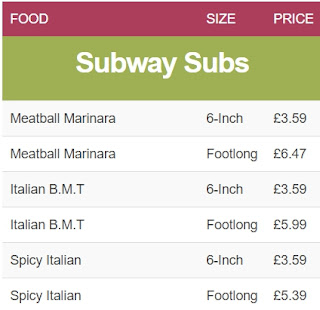 ... but it's only £3.59 not £6.99. fbb is a footlong with meatballs man, of course!
Sadly, Boris' Back Buses plan hardly mentions fares - all posted far away in the far too difficult box. Most European cities can manage it, so why not UK?
And please do NOT claim success for London which, despite Oyster and its clones, still does not have a simple fare structure. Just try to explain pink card readers!
London doesn't even have the same fare between the the same points with bus, Underground and National Rail all charging different prices for the same simple product, e.g. a journey from, say London Bridge to St Pancras.
BUS      £1.55
TUBE     £5.00 or £2.40
RAIL     £3.40
Potty!
Next Variety blog : Saturday 5th June
Posted by fatbusbloke at 02:00