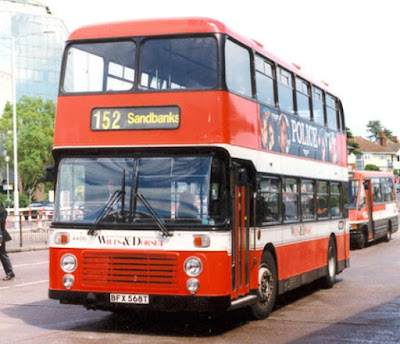 Two years ago, More (once Wilts and Dorset, once Hants and Dorset) merged two Poole local services to create a bigger and better Breezer 60. 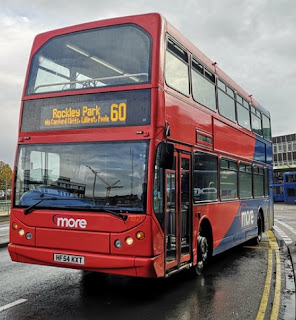 It runs from Sandbanks (for sea, sand and millionaire spotting) through Poole and on to Rockley Park ... 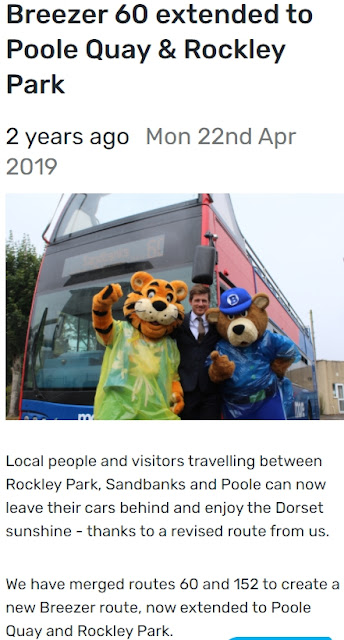 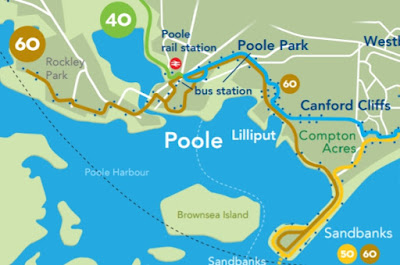 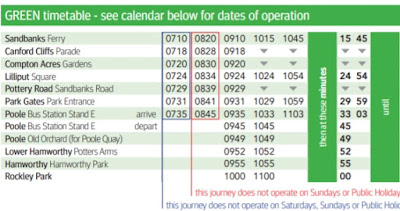 ... and hourly on to Rockley Park. In peak summer, i.e. school holidays, buses to Sandbanks run every 15 minutes! Rockley Park is a vast collection of chalets and immobile homes ... 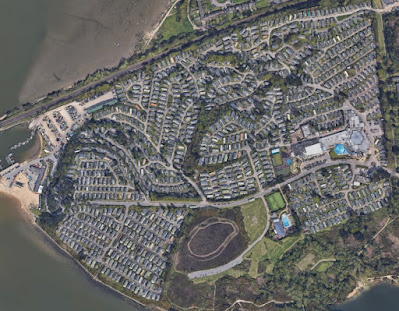 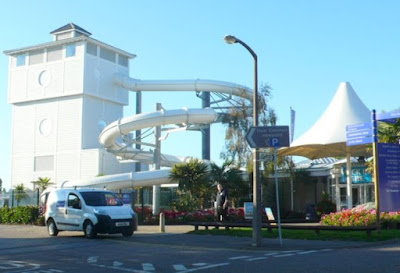 Opposite the terror water slide is a dinky little bus terminus - great if you like chalet-spotting! 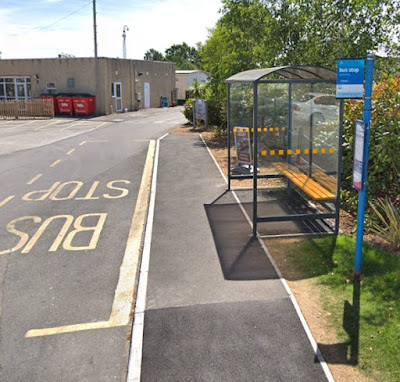 There are pretties nearby and, if you toddle further along Napier Road, you get a jolly view of the railway line venturing westwards to Weymouth ... 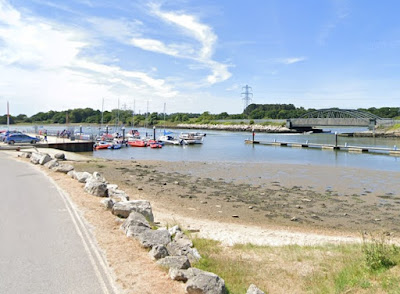 ... and a look at the sea!
On its return from Rockley Park to Poole, the bus trundles via Poole Quay, once an important, erm, quay - but now full of retail and hospitality. 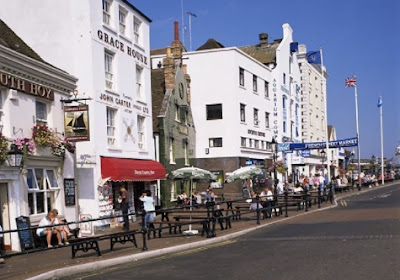 Discovering whether it runs via the quay and, more particularly, when, is something of a challenge. Traveline shows extra stops for the inbound journey ...

... and the map is not absolutely clear, 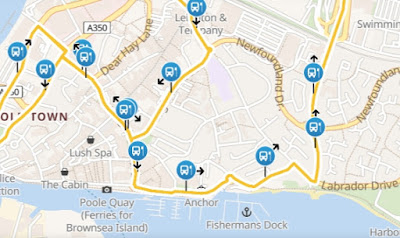 A proper map and a stop named "Poole Quay" would be really helpful!
The Thistle Hotel is the best stop for the Quay. 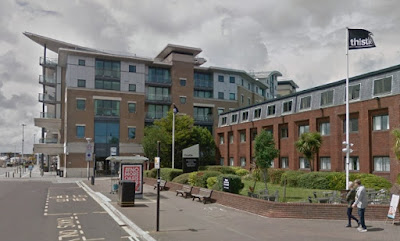 Breezer 70 (map CYAN) is also a long-term Wilts and Dorset route (with modifications) running summer only ... 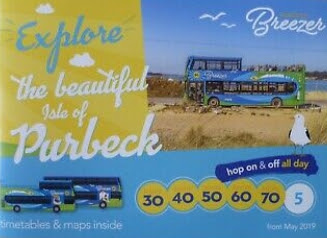 ... but, like the 60, it doesn't venture on to the non-Island of Purbeck.
The Isle of Purbeck is a peninsula in Dorset, England. It is bordered by water on three sides: the English Channel to the south and east, where steep cliffs fall to the sea; and by the marshy lands of the River Frome and Poole Harbour to the north. 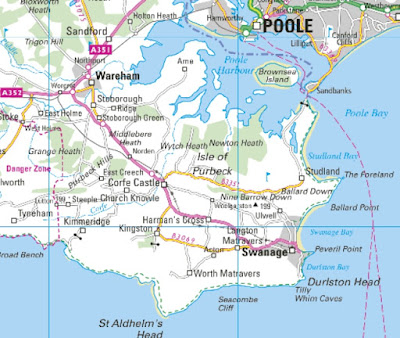 Its western boundary is less well defined, with some medieval sources placing it at Flower's Barrow above Worbarrow Bay. According to writer and broadcaster Ralph Wightman, Purbeck "is only an island if you accept the barren heaths between Arish Mell and Wareham as cutting off this corner of Dorset as effectively as the sea." The most southerly point is St Alban's Head (archaically St. Aldhelm's Head).
Maybe if you dug a very large ditch from the River Corfe to Kimmeridge Bay you could create an island?
Anyway, increasingly, More bus refer to these routes as "Breezers" without the geographical appellation.

The 70 begins at Bournemouth's East Cliff (nice views of the sea) ... 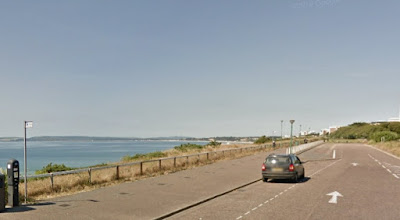 ... and runs via Alum Chine (woodland pretties - not the coloured sands as on IoW) ... 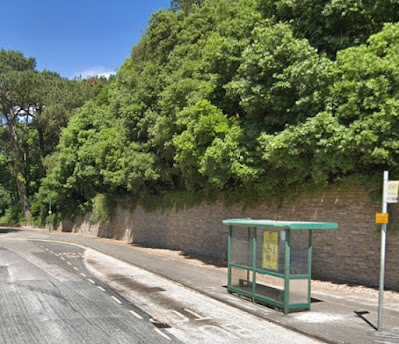 ... and Compton Acres (lush gardens with tea room and retail - as Google informs!). 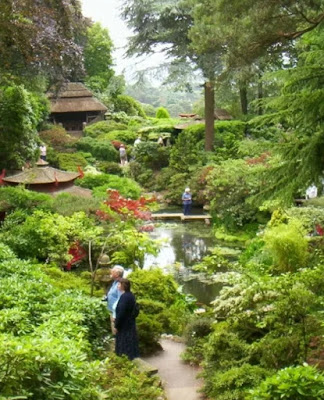 Veritably, nay palpably lush! The 70 makes a pleasant two hour (approx) round trip for those unwilling to venture on to the non-Island or less than enthusiastic about looking at closely packed chalets.
It is also worth noting (financially worth noting for some of us!) that all "Breezers" are "normal" bus services with local fares and the wondrous Old Fogey's pass is valid as per usual!
Deep joy!
And The Leaflet?
fbb announced yesterday that he would review the Purbeck Breezers leaflet. Well he won't 'cos there isn't one - or if there is, it isn't on line. It was this Twitter that the old man mis read, 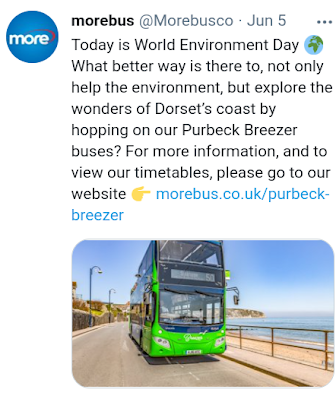 The link takes you to a list of services and their timetables and to what fbb though was a leaflet. It is a map of all the Breezers (as chopped up by fbb), plus a list of camps sites and holiday parks served by the said Breezers. 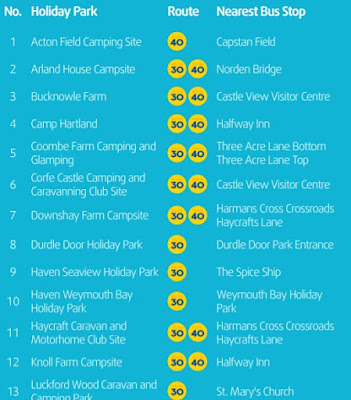 If there is a leaflet for the totality of Breezers, fbb would still like to review it; and if there isn't, there jolly well should be!
Meanwhile, Back at Peterville
The bodger par excellence was racking his few remaining brain cells to find a suitable way of making the marquee for the new station cafe look like a marquee and not like painted plastic. After some discussion involving Mrs fbb's old underwear ("I am wearing my old underwear!") the good lady wife appeared with some cloth, bought to make lavender bags but never used. 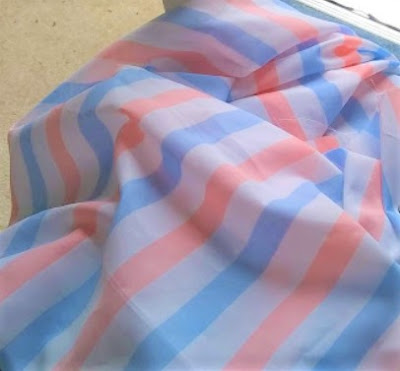 Wives can be a great help with modelling projects - even if they don't always grasp the significance of the problem.
In an outbreak of glorious serendipity, the coloured strips exactly fitted the marquee's roof ... 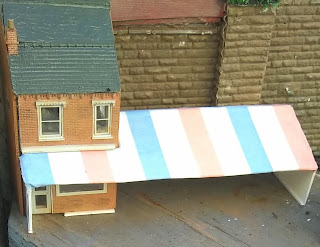 ... and the little bit of "texture" removed the plastic ambience. More to do, of course, but a crudely made model begins to gain a little "character". 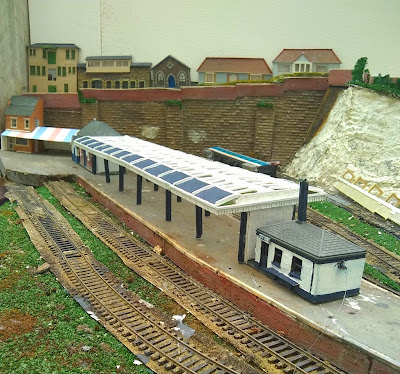 There was, however, a serious problem with the building's extended roof ...
Next Variety blog : Saturday 12th June
Posted by fatbusbloke at 02:00