Like fbb, many of his readers may have failed to remember the stunning work of Midlands Connect, a QUAsi Non Government Organisation based in Birmingham. A QUANGO is defined as an independent operation funded by government, so only as independent as the next hand-out!
Midlands Connect is happy to tell us all about themselves. 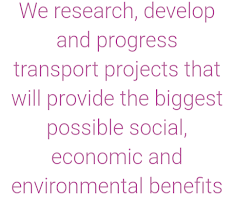 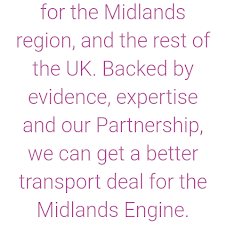 The web site has a picture of the wonderful people who make up the gang! 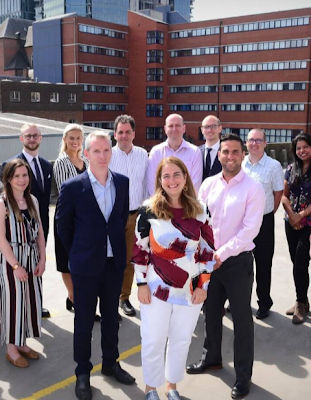 Lovely people! The web site also has a video that is so full of altruistic emotion that fbb was nearly in tears when it ended! 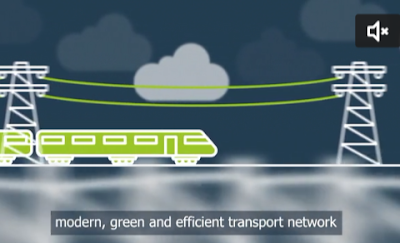 Sadly (maybe gladly as it would leave all fbb's readers well and truly choked off) fbb could find no way of downloading it.
Two phrases appear often on the web site. They are "Midlands Hub" for which there is a video on YouTube, herewith below.Midands Connect has lots of meetings ... 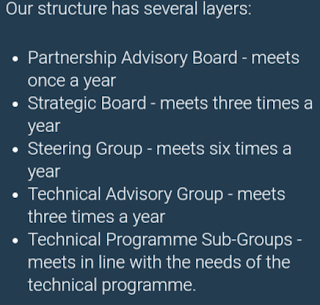 ... and lots of noble and expansive policies.
One of their policies concerns Midlands Engine Rail ... 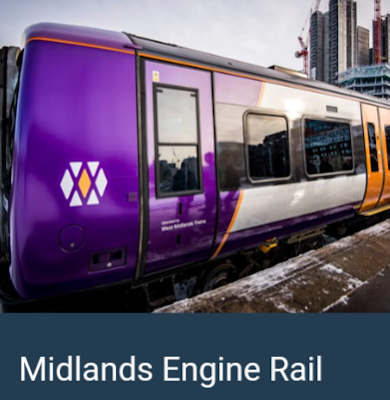 ... not to be confused with a Midland Rail Engine. 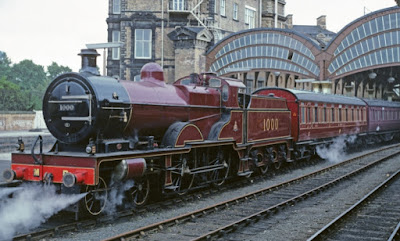 The plan is to improve routes through the Midlands, improving links with east and west with extra trains, more stations and lots of loveliness all round.
The report comes with a neat diagram explaining all. 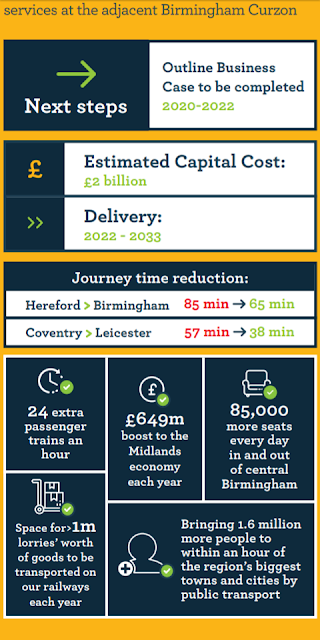 This is all part of the obligatory glossy report (don't you just love 'em!) ... 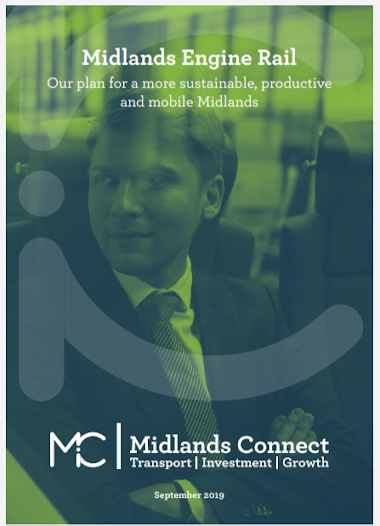 ... which contains a map (don't you just love 'em!) showing where these improvements will appear ... 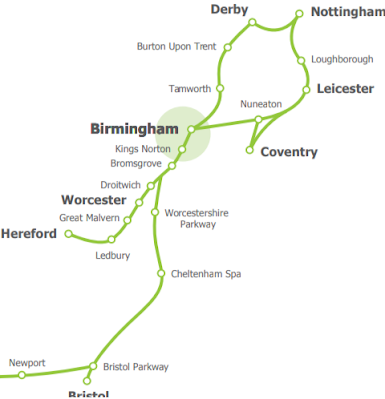 ... which is almost everywhere, stretching from Nottingham to Bristol and, just off the map bottom left, Cardiff.
There is no prize (sadly) for the readers who spot one bit of new line shown very diagramatically (VERY!) on the map.
But it is to there that we will turn tomorrow.
Here is a clue.

Oh, the anticipation is almost unbearable; but bear it you must!
Further Electrification But Not Trains
First Bus has announced a massive investment in electric buses for Glasgow. 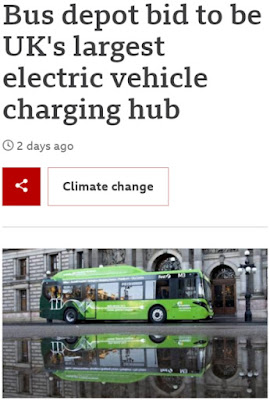 The bus garage in question is the mega depot dubbed "Caledonia" and occupied by First Glasgow. 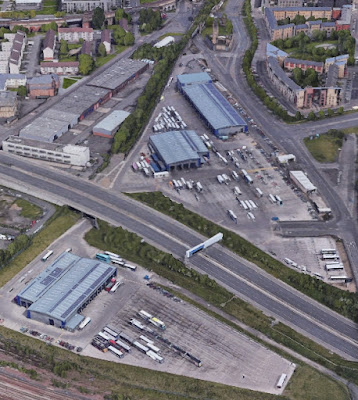 The site is so big it has a bridge under the M74 to link the two halves! Anyway, here is what it is all about. 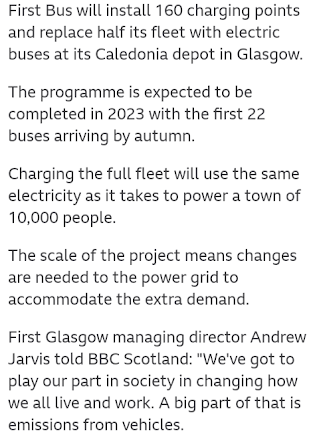 Yet again readers will recognise that emissions from vehicles will be reduced in the city (good!), but, where is the power to come from for a town of 10,000 people, no less?
Will the power station be emission-free?
Nope! At least not in the foreseeable future.
Emotional altruism rules OK! Practical realism seems somewhat lacking!
Going "Green" At fbb Mansions
Well, just along the road, not far from the imposing portico of fbb mansions ... 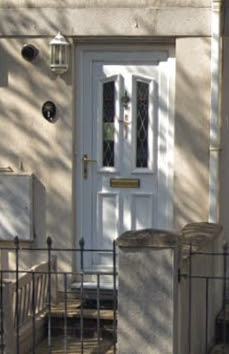 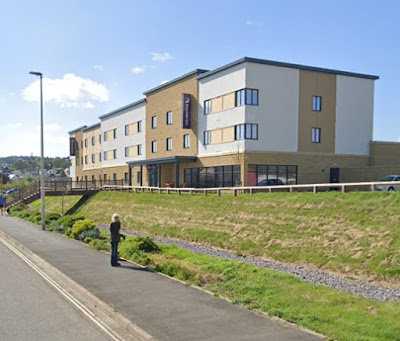 It is raised up high in preparation for Global Warming's mega high tides. The fbb entrance is raised up far less high, so presumably will be under water come the predicted ecological Armageddon! In the early days of the hotel's construction, fbb was assured by the builders that the somewhat scruffy grass bank would be planted with "shrubs and stuff". Alas no shrubs have appeared and not a sign of "stuff" has been seen.
But, early in on the project a local resident and volunteer appeared and started planting flowers (and possibly even "stuff") along the edge of the pavement. 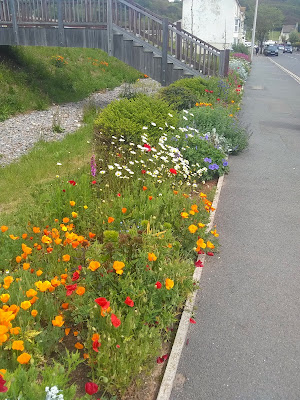 It is delightful to see that these are now self-seeding on to the aforementioned bank. 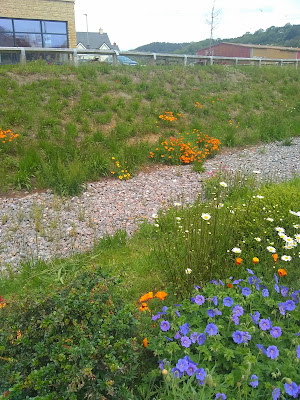 God's creation may well achieve what the Premier Inn failed to accomplish!
Also of note, but less obvious, is a significant outbreak of poppies that appear each year along the edge of fbb mansions and adjoining properties. 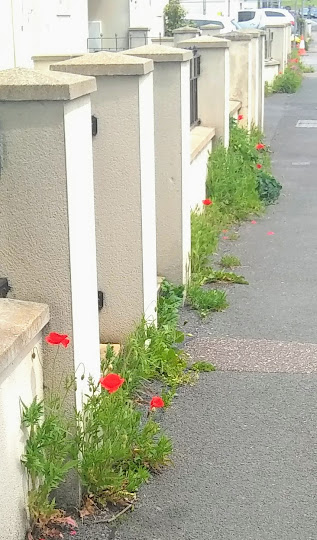 They are, as poppies are wont to be, somewhat transient; but rich, relaxing and rewarding none the less. Who needs de-stressing pills when you can gaze on natures finest?

Beautiful Buses
Sometimes bus pictures are just, well, beautiful. Below is a Transdev Coastline 843 from York to Tadcaster late-ish one evening under a thunder and lightning sky ... 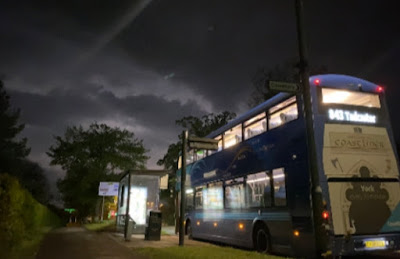 ... and ...
Beautiful Trains
... here is the Jacobite steam hauled train under a glowering late evening Scottish storm-soaked sky as it steams from Mallaig to Fort William.