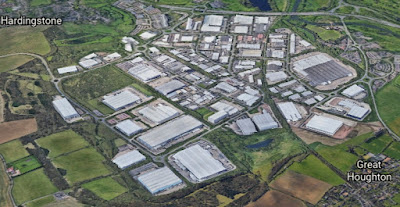 Brackmills is one of Northampton's mega industrial estates, consisting  mainly of "warehousing" (should we call them "logistics" now?) businesses. The English Rail Transport Association (ERTA) wishes to re-open the former railway from Northampton (formerly Castle) Station to operate as a Park and Ride for Brackmills.
Note that the industrial area is huge, filling in most of the green and pleasant land between the villages of Hardingstone (above aerial view, top left) and Great Houghton (bottom right). The Google Earth view above is orientated facing west. If we spin round so the north is north ...

... you can spot there trackbed by the river (top left), following a gentle curve and exiting the picture centre right. Within recent memory the line was open to serve some of the warehouses. So, tomorrow, the ERTA has a Zoom as reported in the local rag.
A meeting to learn more about a transport group's hopes for a 'shuttle train' in Northampton as well as work to link the town back up with Bedford by rail will be held next week.

The English Rail Transport Association have made headlines in Northampton in the last six months by sharing their vision for the town's train links.

It includes a concept to build a shuttle train out of the town to Brackmills on a disused railway line to create a park-and-ride service for the town centre.

They also think the town is in a position to reconnect with Bedford by train and get in on a multi-million pound government plan to link Oxford and Cambridge.

Now, following numerous delays brought on by the Covid-19 pandemic, the association is ready to invite the public to a Zoom hearing next week to hear about their plans and what needs to be done.

The meeting on June 25 at 3pm is being hosted by Brackmills CEO Sara Homer, who has publicly supported the group in the past and claimed she will "stop at nothing" to realise their ideas.

To request the Zoom link to listen to the meeting, contact Sara Homer on sara.homer@brackmillsindustrialestate.co.uk.

What would be the practicalities? 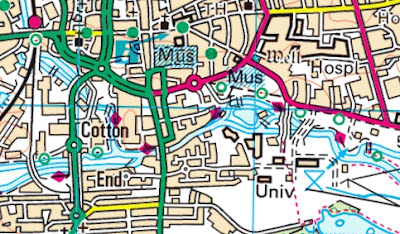 The former branch line exit from Northampton station (upper left) is still shown as a "siding" of sorts ...

... and there is even some track still there! The route then curves sharply ... 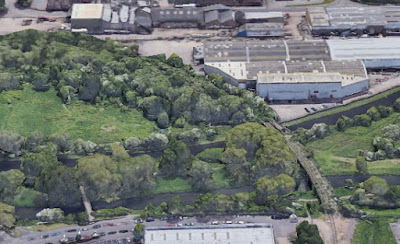 ... over the River Nene and a canal to run due east. The bridges are in place ... 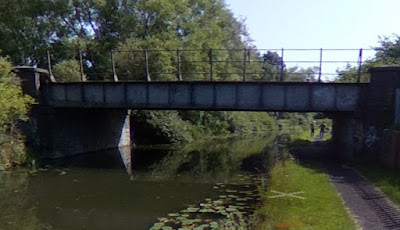 ... and the track continues under Towcester Road and alongside Pomfret Arms Close ...

... where track is, again, still visible (below looking west). 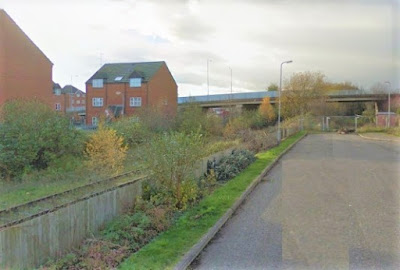 There are even the disused remnants of some sidings along here (back to looking east! It makes you dizzy!) ... 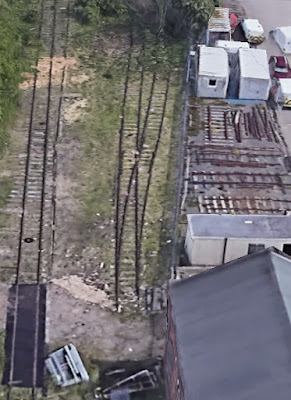 ... but then we come upon the first snag. 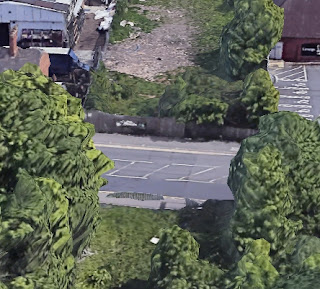 This innocuous bit of road carries traffic southbound from Northampton's town centre. Although it is much less busy than it was in fbb's youth, it would still cause chaos ... 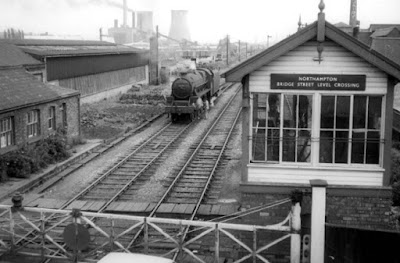 ... if it were to carry a busy Park & Ride train service. Trams might be easier to cope with, but the delays would not go down well with Northamptonians who have not seen a train there for many a long year.
The re-opened line would then pass south of the town's recently moved University ... 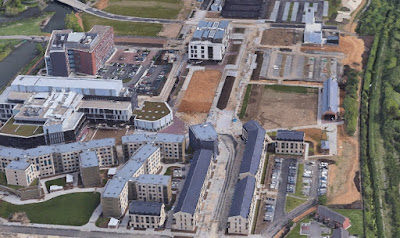 ... where a station/tram stop would be useful.
The route then plunges under the A45 ... 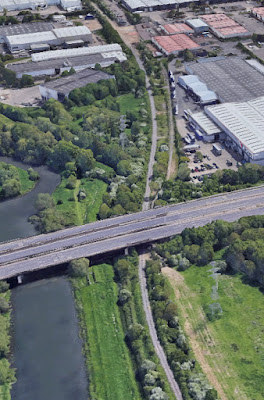 ... and here a footpath and cycleway would need to be pushed to one side - still possible but a lot of expensive work. And who knows what obstacles, official or unofficial, that may lurk along the grim back walls of those warehouses?
Something has to be done about crossing Burryport Road ... 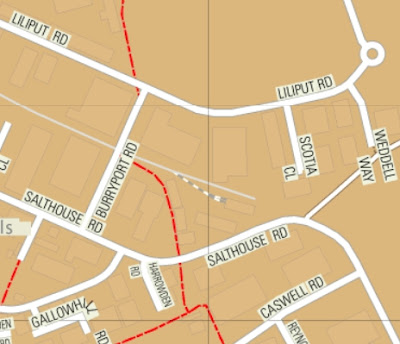 ... beyond which railway sidings once stood. 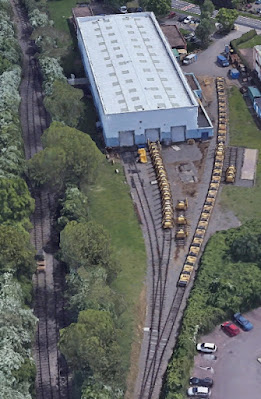 It is not clear how they got those wagon out as the track is not connected to anything, nor is it clear where the proposed Park & Ride car park will be ... 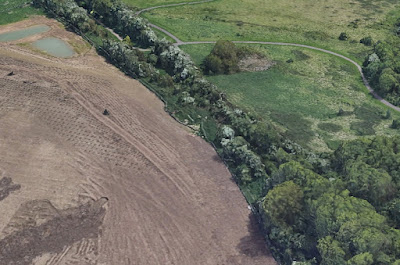 ... presumably on green land to the east of the estate and uncomfortably close to the genteel village of Great Houghton!

Expect loud protests!
But, thus far, with a few niggling "snags", it would be possible to put the line back in theory. But it would be at huge cost.
There are, currently, plenty of buses to Brackmills with a wide selection running at shift times ... 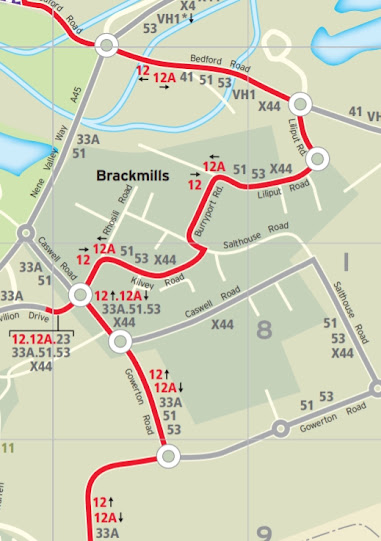 ... all serving a dinky little bus station on Pavilion Drive (centre left) for the denizens of the great Barclaycard edifices. 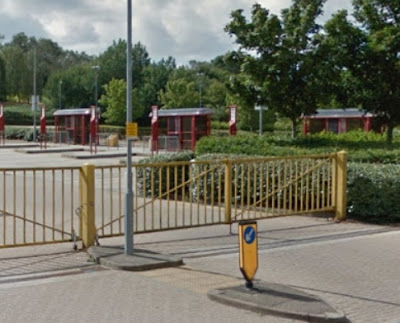 All routes serve the town centre and bus station "area" without the circuitous route via Northampton station by train or tram followed by a brisk stroll or a bus ride.
The Stagecoach 12/12a mega circular runs all day Monday to Saturday every 30 minutes.

Train/Tram and walk/bus from the station to town centre would take longer than 20 minutes, you would think - especially if the rail vehicle had to fight for supremacy at Bridge Street Level Crossing.
But ERTA want to continue the train service all the way to Bedford!
Hmm ... ?
Six Picnic Tables - A Tale Of Great Joy 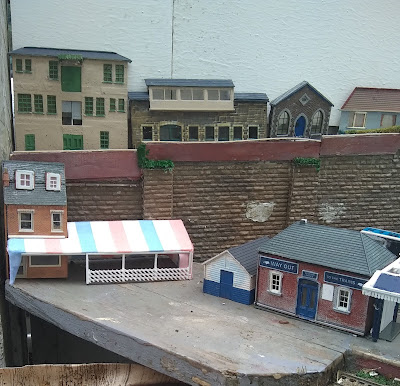 What seating might be appropriate under and beside the marquee at Peterville Quarry Station's much improved caff? A search on the dreaded internet revealed these. 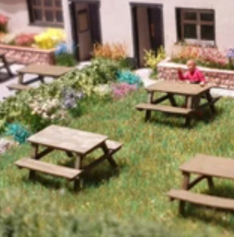 They purported to be to OO scale rather than HO, the usual size for the myriads of continental scenic "bits" (OO is 4mm to the foot, HO is 3.5 so not to scale with the buldings). The price was reasonable and the postage charges minimal. So fbb sent off for a pack of six. 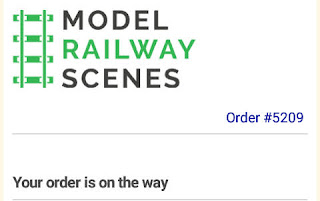 But arrive it did not! After a few days of no-show, the following missive popped into fbb's in box. 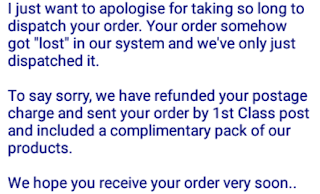 Now that's what fbb calls top notch customer service. So it was that the postie arrived yesterday with three packages for fbb; printer cartridges, a mysterious package from the South American jungle and a box from Model Railway Scenes.
It was a stout cardboard box ... 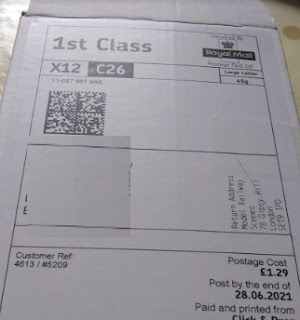 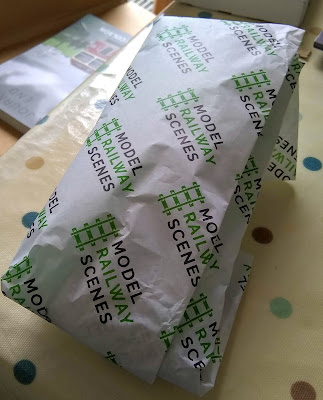 ... within which nestled the pack of six picnic tables! 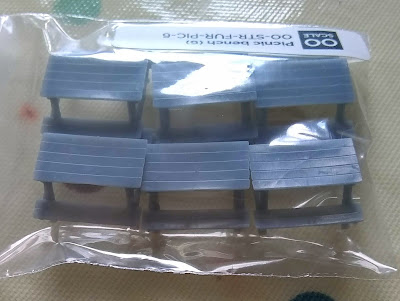 Also within its glittering protective comfort was the Brucie Bonus. 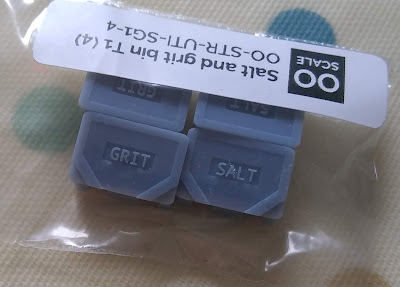