To Infinity Little Hulton and Beyond

So far we know that, from 4th September, Stagecoach Manchester's "cross city" service 38 was cut back from its origuinal terminus at Farnworth to turn via a loop of modern housing in the Hinterland of Little Hulton.

But how does it get there? Does it serve the city centre? This is Stagecoach again:- 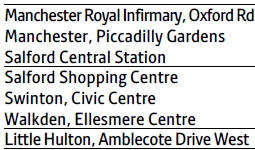 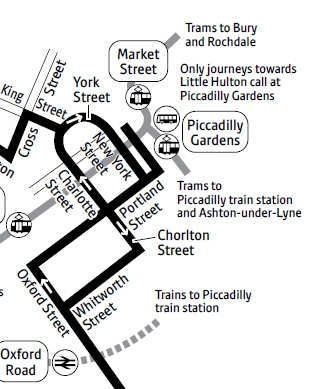 ... which is better still. It also has a note reinforcing the fact that the main City Centre interchange point is not served on journeys from Little Hulton.

It would be better still if it included a symbol for the actual stop locations for ease of interchange. The "southbound" stop (CV) on York Street is very close to the bus station with more help being given by TfGM's full city centre map. 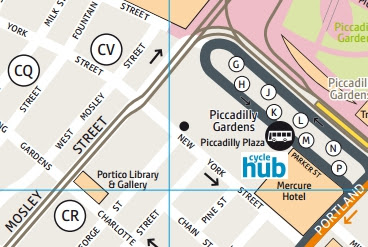 First's "cross city" 42 joins the rest of the frequent Oxford Road routes in Piccadilly bus station whilst the 18 serves Piccadilly Gardens but on the opposite side of the patch of green from the bus station. 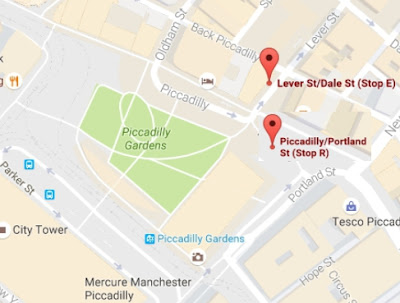 But Piccadilly in any form does not appear on the 18 timetable; its nesting box is at Shude Hill interchange.

One way streets and "operational constraints" compound this potential confusion; but the industry (in its broadest sense) doesn't make it easy for its customers. Perhaps we all have to accept that, nowadays, city centres are intrinsically troublesome. 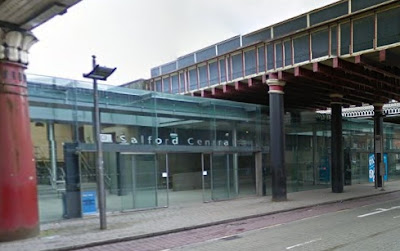 Stagecoach offers the more complex New Bailey Street with Salford twice. This time TfGM has a clear and simpler stops name. Incidentally, Notwork Rail doesn't seem to know that their station is on New Bailey Street. 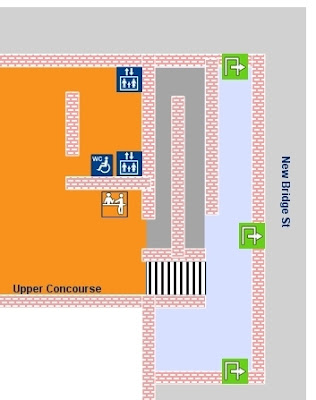 Identity confusion continues with Salford Shopping City. There is really no doubt about its name as subtle local advertising shows. 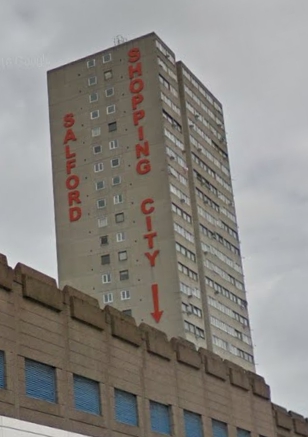 But Stagecoach thinks this is Pendleton, not Salford. It may, technically, be within the Parish of Pendleton but surely the simple name (TfGM again) is better. 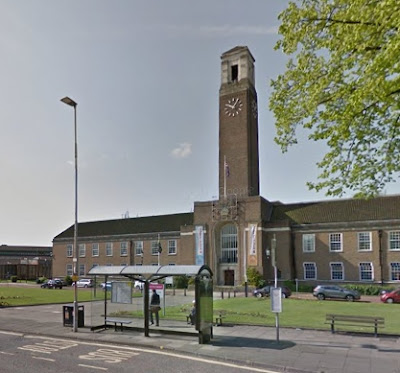 There is no such place. It is either Salford Civic Centre or the (former) Swinton and Pendlebury Town Hall. Maybe Swinton Civic Centre is less befuddling.

The route trundles happily along the A6 but then the fun really starts. The heading for the Stagecoach timetable shows this:- 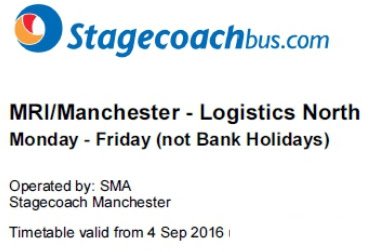 Keep calm, dear, it's only a bus timetable; but it goes from MRI Manchester to "Logistics North". 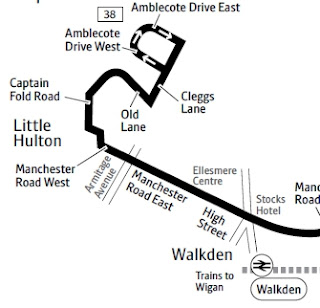 fbb spent some time driving around the 38 route at Little Hulton, in a virtual Streetview empowered car; and there was no sign of Logistics North. He even scanned aerial views to see if anything en route looked like Logistics North.

That splodge in the left centre looked hopeful ... 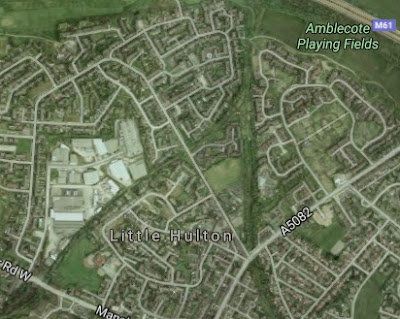 ... but no Logistics North. 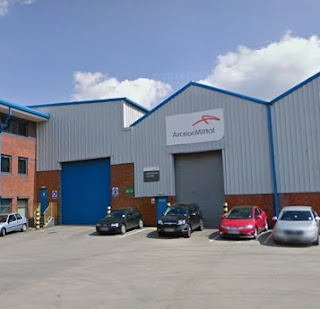 Perhaps the timetable heading was wrong. Not at all, there it was on the astounding(ly bad) Stagecoach App. 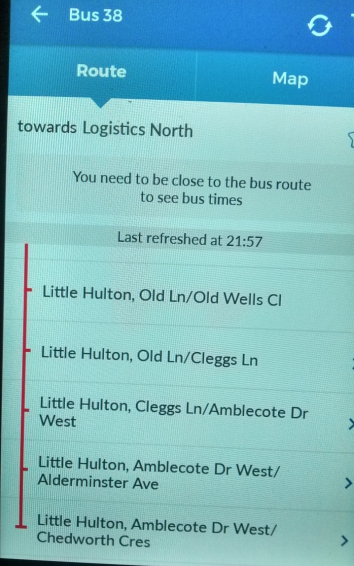 Once again, the 38 is going towards Logistics North but isn't. It is going to Amblecote Drive.

Thankfully a derisory search on the interwebnet gives us a clue or two.

Proceed down the A6, now named Bolton Road, to the link road with the M61 ... 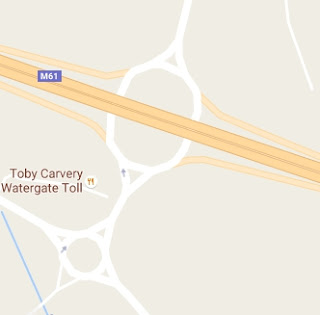 ... and the south facing exit leads to a huge but under development warehousing industrial estate.

The most notable building being a warehouse for Aldi. 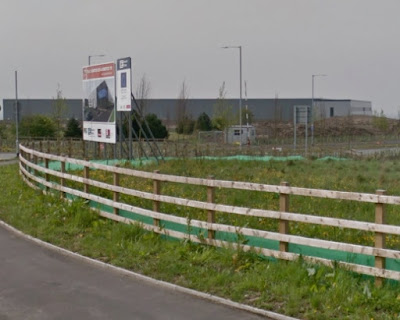 But what has this got to do with Stagecoach 38 to Ambklecote Drive. TfGM's App might give us a clue. It shows 38s to Amblecote Drive as it should ... 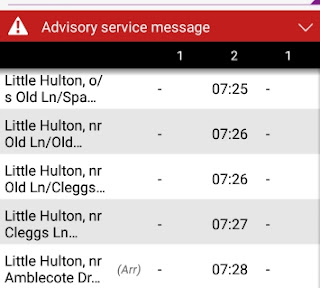 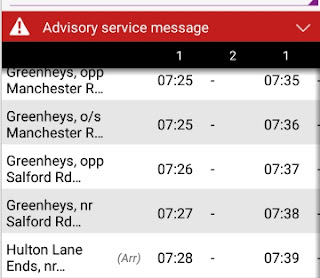 "nr" what cannot be discerned, neither can the location of Hulton Lane End saccording to ANY on-line source. Greenheys nr Salford Road and Greenheys opp Salford Road are equally unspecific. But there is an "Advisory service message"; which is a complicated way of saying "summat's up!".

But in the last couple of days, Stagecoach has added a REVISED service 38 timetable. And it now shows a terminus at ...

But we are no nearer. Bridgewater Avenue does not exist in Manchester or Bolton.

But there is something that fbb missed in his almost uncontrolled excitement. A new TfGM leaflet has appeared in their library. It is for the 38 from 30th October; the older leaflet has now vanished. 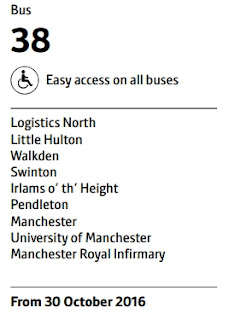 From Sunday 30th the leaflet confirms that buses will run to "Logistics North", or at least to the first roundabout down the new road which is named Bridgewater Drive. 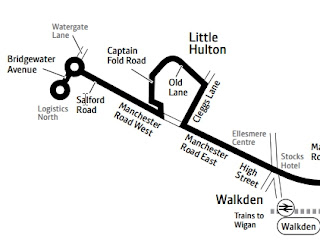 And the timetable confirms the destination.

Stagecoach's web site does not highlight the change.

We have made some changes to our services to improve punctuality where worsening traffic conditions have impacted on timekeeping.

Full details of the changes and new timetables are available here.

We are making changes to services:

The highlighting in red has been done by fbb who obediently clicked here for full details and timetables and got this in amongst some other stuff.

We are also introducing a new link to Logistics North.

There were no timetables.

And one final point. The TfGM App only shows times for Mondays to Fridays (Weekdays) or Saturdays. 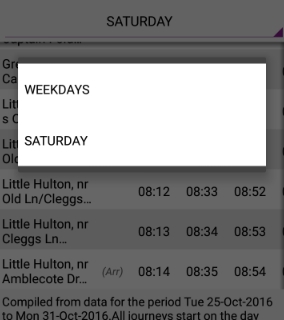 And so to today's motto:- 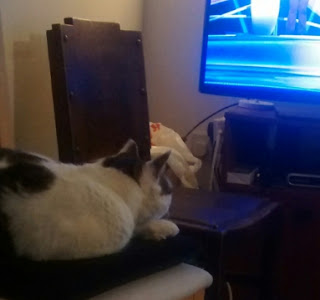