Regular readers will know that yout oft-criticised blogger has made two attempts to give the new Stagecoach App a fair and realistic road test. In the on-line reviews, at least two users were full of praise for the real-time bus tracker information which, in essence, told you how much time you would need to wait st a chosen bus stop for a chosen bus.

Visits to Marine Place in Seaton and The Triangle in Sidmouth both produce "nul points" with inadequate signal for fbb's phone and thus a non-working App.

The next location to try was Axminster. So on Friday last the old codger set off for Axminster Station in the hope of monitoring Stagecoach service 4, and, as an aside, observing how many folk changed from service 4 to service 4 as per the App's daft journey planner. 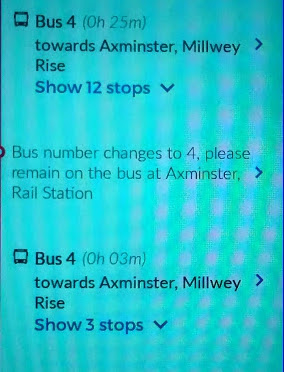 Of course, nobody changed; they were told not to; but it is, and always was, a through bus with through fares.

Traveline shows a connecting service from Axminster Station to Huntley Close, a stop name that does not figure in the Stagecoach Universe. 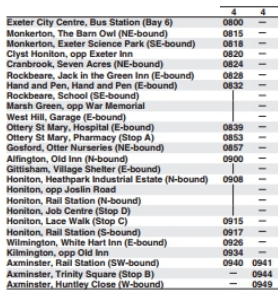 There are FIVE timetables listed for Stagecoach service 4 operated by The Exeter team ... 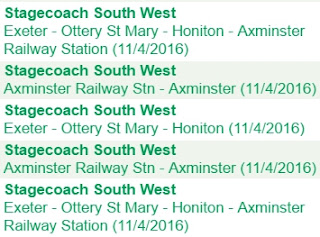 ... all delivering the same timetable, as per the extract above.Three entries give the same map with a terminus at Axminster Station ... 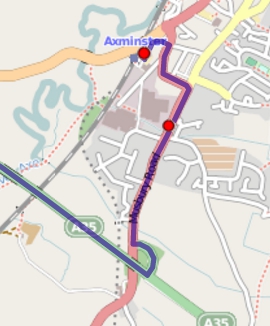 The middle map shows the whole service as finishing at Honiton and No 4 on the list is a shuttle from the station to the mysterious Huntley Close. 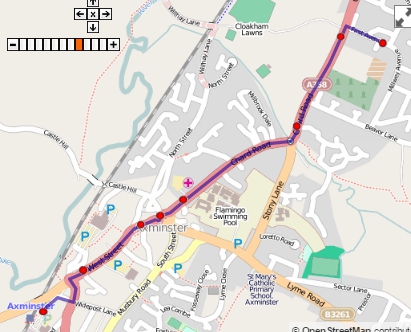 With three different maps and five copies of the same timetable it would be an education to see what the App could make of it all.

But, yet again, the signal was inadequate and the App would not Appear!

What a pity. This meant that the supposedly useful App was useless in a fair chunk of East Devon. There was still Honiton to try but fbb didn't have much of a hope.

Whilst observing, however, fbb glanced at the electronic departure board. Yes, this was the one that had previously shown unhelpful destinations for service X51 and X53. 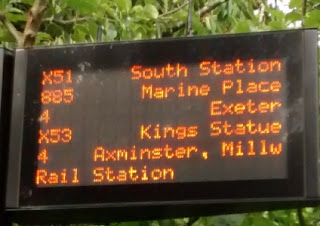 But on Friday all had changed. 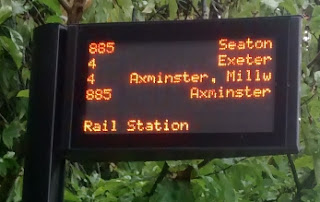 The 4 still goes to Millw but Traveline would suggest Huntl; the 885 now goes to Seaton (well done!) in one direction and Axminster in the other. That "Axminster" should be the same as service 4, i.e.Millw (or Huntl).

But the X51 and X53 have disappeared. Of them there is now no mention.

Bur as fbb mused over this example of practical electronic passenger assistance, in drew an unannounced X53. Mild panic ensued with a group of waiting passengers who were wanting an X51.

"It will change into an X51" quoth fbb in accurate information mode; which it did, "but it's only going to Bridport." It was the 1420 as per Holmes and Watson. (read again) and fbb was consulting the ever helpful GoTimetable Seaton downloaded and complete on his phone and thus accessible without a signal. 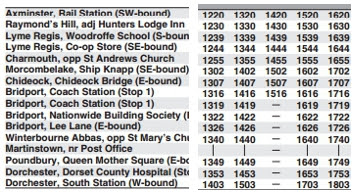 "Oh no it doesn't!" said one of the crowd. "Look here on this timetable. It says it goes to Dorchester," he said, prodding the First Bus version glued to the inside of the shelter. 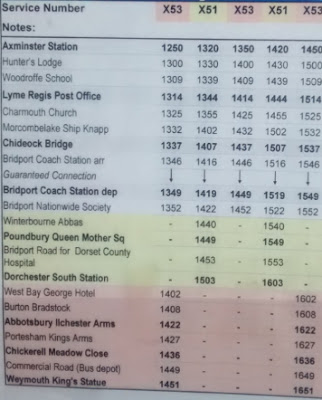 And there it was, large as life, the 1420 to Dorchester arriving at 1603. A red faced fbb rushed home and rapidly corrected the GoTimetable data! 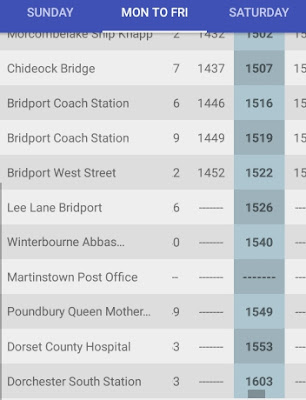 Clearly there is more to this problem; and, from fbb, more tomorrow. 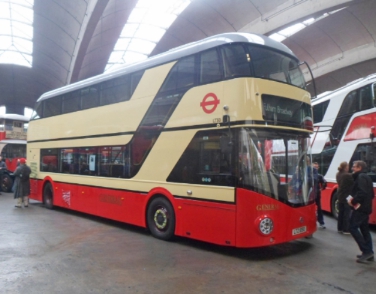 ... don't buses look really smart when the livery is applied to match the body shape? The Borismaster was pictured inside the magnificent West Ham bus garage ... 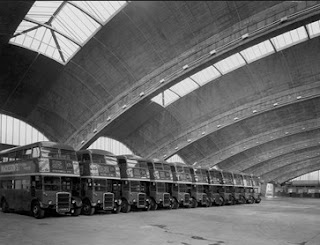 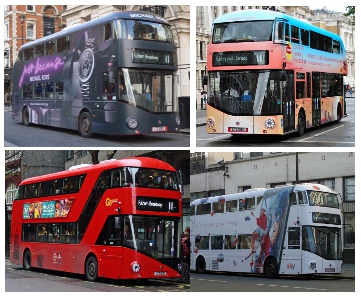 Any colour as long as it is(n't) red!

Thanks to Alan, Northampton correspondent, for the main NBFL picture.