What The Screens Mean(s) 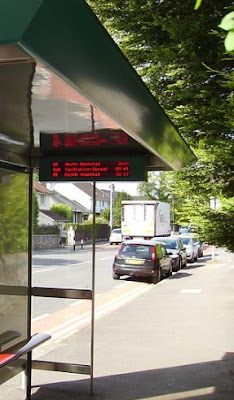 In Exeter, High Street bus departure screens used to look a bit like this (athough this one is/was in Cardiff.) Each shelter had one suspended from the roof. In the past, fbb has observed these with interest and he came to the following conclusions.

1. About 50% of them were blank.
2. Nobody ever looked at them
3. Those that were working showed times that did not match what was happening on the road

In short, they were useless. There was no such availability in the bus station;  although fbb's correspondent remembers when every stand had a screen operated by a domestic computer in the office. Very simple and effective. Three rousing cheers for Harry Blundred's Devon General! 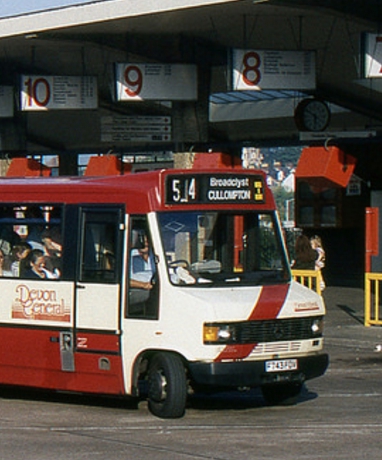 See! The red boxes suspended above the yellow railings.

Of course, technology has moved on and much improved systems are available linked to efficient databases and utterly "sustainable". For those unfamiliar with technology, "sustainable" means that it all works with very little human intervention.

Which is why Exeter's old screens didn't. They were not properly maintained.

Modern screens are much better, we are told, although Axminster's is often inoperative ... 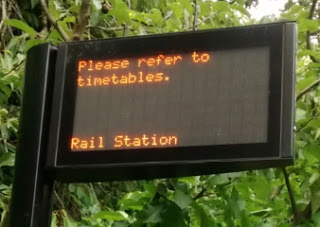 ... and Seaton's has never displayed so much as one orange/yellow dot. 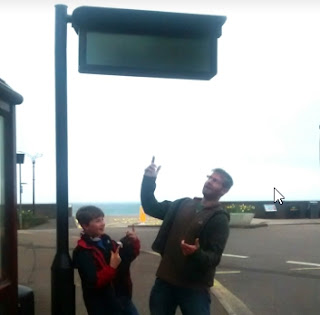 No 1 son and No 2 grandson
enjoying the Seaton display

So fbb was excited as he travelled to Exeter especially to see the new displays. The one (there is only one) in the bus station was adjacent to the travel office and consisted of a large video seen (no yellow/orange dotty letters and number) with departures in time order. 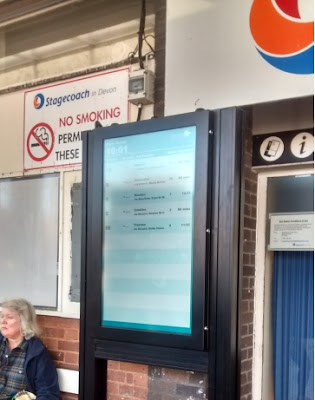 Most destinations appeared correct except, as usual, that for fbb's local route 9A. 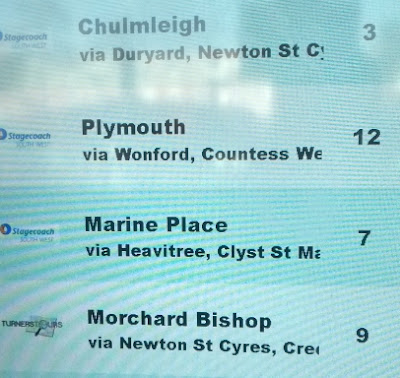 Marine Place is not very helpful. It should read "Lyme Regis" but it never will because the 9A doesn't go there; you have to (not) change at Seaton to the same 9A which is a different and separate 9A, electronically speaking. The numbers on the clip above, by the way, are the bus station Stand Numbers; the display also includes route number and time. 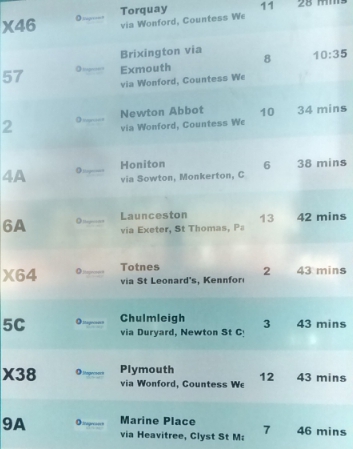 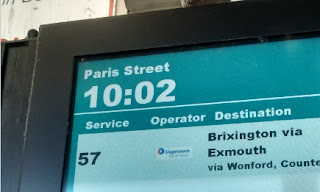 "Bus Station" would remove one source of confusion! Historically it was, indeed, known as Paris Street Bus Station but the vast majority enter via Bampfylde Street. 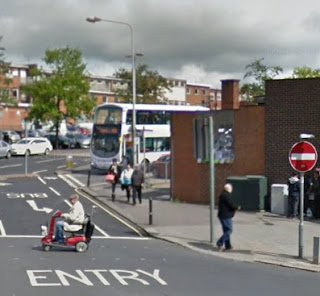 Not everything at the bus station was accurate, however. The painted lists of departures, stand by stand, included this gem. 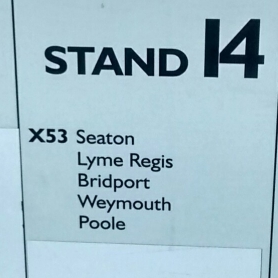 You would have a long wait for a bus to Poole, as the last X53 to Poole ran nearly 6 months ago. There is now no X53 from Exeter! But the bus station is run by Stagecoach and the X53, and its pathetic successor the X52, are run by F*rst B*s.

And we don't want anything to do with them, do we?

But fbb was next off to High Street. Here there are only two displays, each for a run of four shelters on each side of the road. The one on the left looked embarrassingly bland as fbb approached. 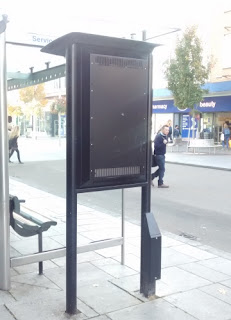 That was because it was facing IN to the Shelter; a sensible move if it were supplying information for that shelter alone, but rather silly as it referrs to all four!

But, in very general terms, the somewhat hidden screen seemed much as would be expected. 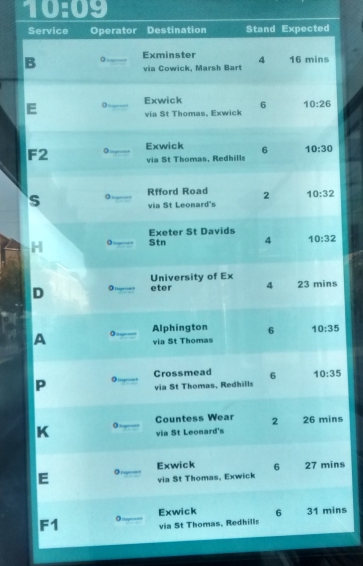 The usual but ever unexplained convention appeared to apply; namely that, if the screen shows XXmins, it is "real time" but if it shows a real time (e.g. 10.35) it is unreal time - just a scheduled departure with no reference to reality. Why is this never explained?

But why are these lists in time order? Do the worthy residents of Exeter turn up at the sign thinking "I am desperate to catch a bus at 1035?" Isn't the usual search for the NEXT service E, for example?

Surely the display should be in route letter order?

Ahh, but ... That's how the non bus passenger program writer has dictated that it should appear; so that's how it has to appear. Right?

Is it picky to complain about arbitrary abbreviations?  Is the technology so proscribed as to require incomplete names like this?

And where is Marsh Bart? 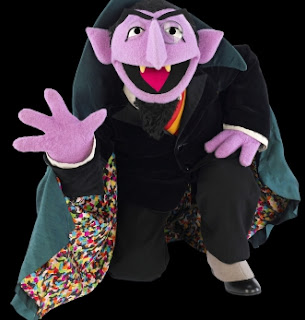 Has no-one in the Exeter Deep Throat confuser section ever heard of scrolling text?

fbb will return to the accuracy and usefulness of these displays early next week; the analysis will fit nicely with the chubby one's experience of the "bus tracker" facility on the Stagecoach App. At last he has found a location where it works; at least it delivers expected times of buses. Whether these are accurate must wait until the future blog. Guess!

But there is another display to look at. This one is at the opposite end of the other set of shelters on the other side of the High Street.

This time it doesn't face into a shelter. Good. But it faces out on to the road. NOT GOOD! 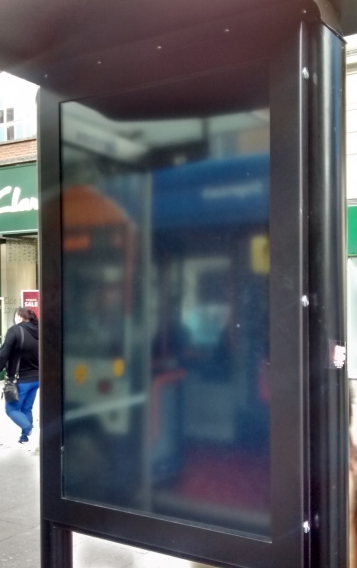 ... completely blank; busted; kaput; it has passed on; it was deceased; it was (appropriately) a late parrot bus departure screen.

It was good to be back to normal in Exeter; 50% of the screens on the High Street were non-operational.


Next bus blog : Saturday 29th October
Posted by fatbusbloke at 02:00