Popping Off Via Poppleford

One of the consequences of polishing the lens with the phone open and in camera mode was a fine collection of pictures like this ...

... several of which, without fbb's right spectacle, were automatically knitted into an exciting "animation" by Google. Fortunately, fbb's little outing was somewhat more interesting. 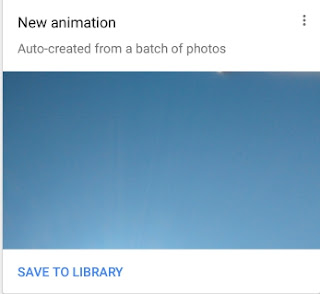 The trip was prompted by news of the installation of new electronic departure displays in the High Street and at the bus station in Exeter, of which more in a later blog. The fbbs are on dog-walking duty for their neighbour (who responds with cat-supervision when needed) so time was limited.

So it was decided to drive to Newton Poppleford ... 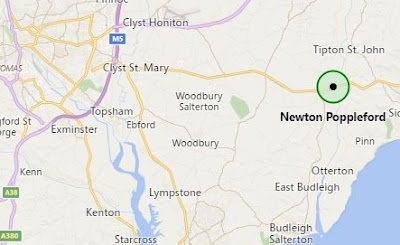 ... and use the Park and Ride service. Locals will be surprised by this title but the designation is unofficial. Off School Lane ... 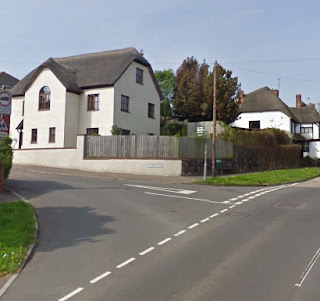 ... in turn off the eastern end of the High Street is a small FREE car park. It has excellent facilities ... 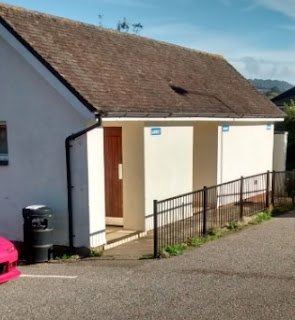 ... and a footpath leads down beside the Church ... 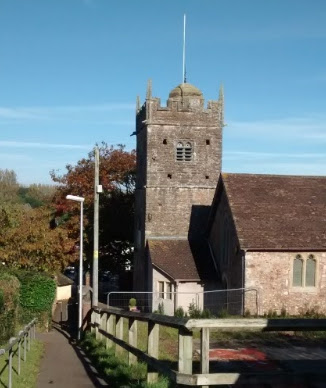 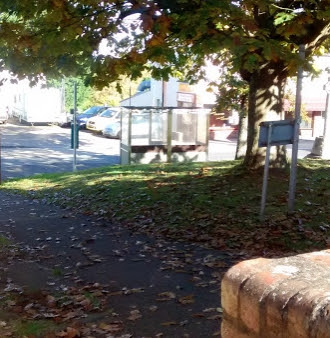 Newton Poppleford Church would be better.

Newton Poppleford, which sounds like to joke name, is derived from the New Town near the Pebble Ford over the River Otter.

fbb had scheduled the 0939 Stagecoach service 9 from Honiton via Sidmouth but was in time to catch the 0928 First Bus X52. This was four minutes later and packed with 10 passengers all of "mature" pass-carrying age. It might well have been the heaviest loading of the day as the bus fills a two hour gap (Stagecoach please note) in the 9A from Lyme Regis and Seaton.

There was time to survey passenger facilities and information at the stop. There was a shelter of minimal size. 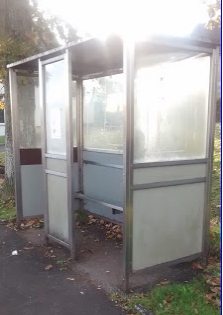 Seating was a hard, uncomfortable buttock-bruising iron bar. It was cold - very! fbb had arrived in a comfy heated Fiat Multipla; bus travel is so attractive! There was a pole with flag and timetable frame ... 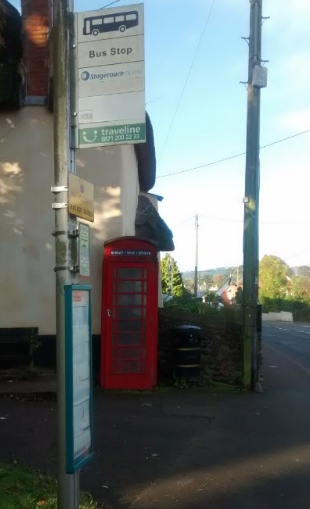 ... containing (oh joy of joys) full timetables but only for the two Stagecoach routes; 9/9A (half hourly) to Exeter and 157 (hourly) to Exmouth. These numbers did not appear on the flag but, for those with excellent vision, a very small multicoloured X52 had been applied by First Bus.

Can you spot the First Bus timetable frame? Yes, of course you can't, but there it is on the telegraph pole near the phone box. 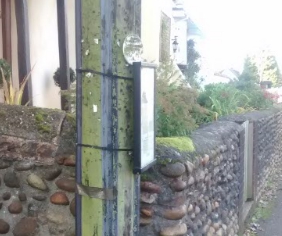 If you were observant enough to spot it, you would be equally pleased that it, too, contained a full timetable. 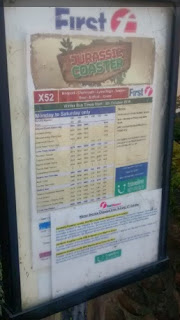 Not much of a timetable, just every two hours.

But what a glorious ride! The trees were "on the turn" and the sun was shining, despite the chilliness. 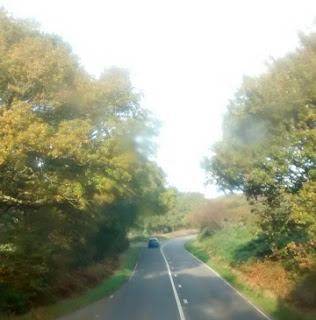 Top deck front offside seat as always was the spot for the very best views. 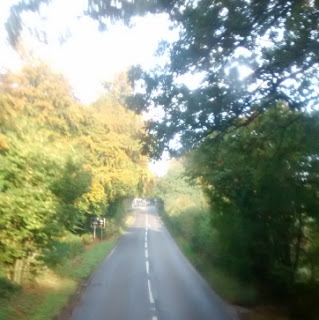 As the bus passed Westpoint, the Devon County Showground exhibition arena, fbb was disappointed to note that he would have to miss the Woodworking and Power Tool Show on 29th and 30th of this month. 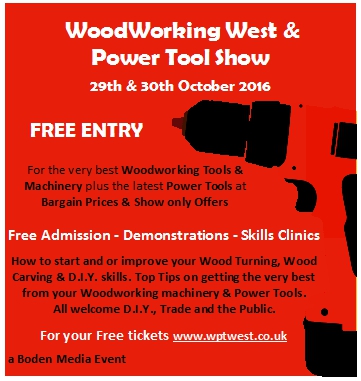 Pity; but he will be on the Isle of Wight preaching at the fbb's former church in East Cowes.

Other exploits in Exeter will have to wait until later this week.

The return journey was by service 9 with just time before departure to enjoy a coffee and a second breakfast; £2.95 from a little one-man caff just across the road from Exeter's bus station. 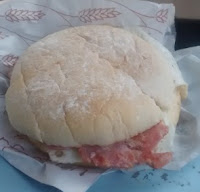 Return was on an older bus, but warm and comfortable on top deck front if you had very short legs. Departure from Exeter was three minutes late as our driver helpfully waited for dad an two smallish sprogs who were off to Crealy Great Adventure Park.
Another excitement for fbb and Mrs fbb's bucket list! And there's paintballing and indoor karting nearby.

The facilities at the eastbound stop in Newton Poppleford are poor in the extreme. 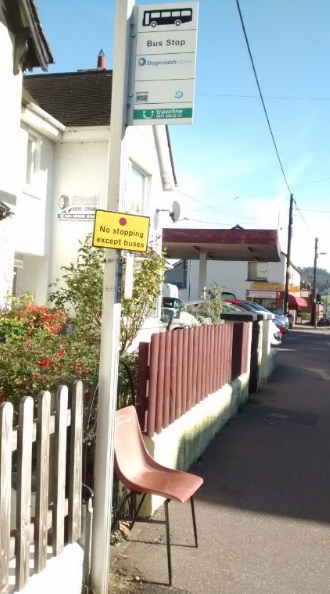 No timetables, no shelter but just a chair supplied by a local resident. Very public spirited of you, sir or madam. But a poor advertisement for public transport.

Here is the 9 and the 157 picking up two pax; picture taken as fbb waited for his ride TO Exeter. 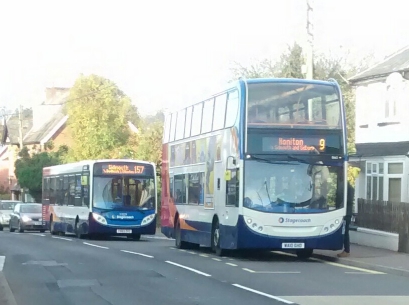 When fbb used to write essays at school and university, it was drilled into him that the opening paragraph(s) and the conclusion were the most important. The conclusion summarised the contrnts of the essay and left the reader in no doubt as to the author's ability and opinions.

fbb's bus trips were straightforward "normal" bus rides. Buses ran on time, the seats were adequate if not actually cosy and the trips took fbb where and when he expected them to. For the TO Exeter run, information at the stop was adequate; likewise for the return run at Exeter bus station.

But to really attract new customers it needs to be much much better.

1. Usable seats in a clean shelter. And please don't bleat on about financial constraints and high cost. There is a whole "community" at Newton Poppleford waiting to be mobilised. Free travel for a team of shelter cleaners - cheap and effective.

2. Readable route numbers on the bus stop flag. Sticky numbers are cheap and easy to apply. Make them as big as possible.

3. One panel with timetables, fares, route map and local street map. This would be normal in any small town in, say, France. Modern computing equipment and printers make this a cinch once the frame is in place. Another job for a local "volunteer"?

4. A local contact phone number answered locally for both companies. Traveline is a poor quality cop-out.

Positives like this would surely pay for themselves in increased awareness and thus increased patronage.

And fbb really enjoyed both rides. And to cement the delights of the day, Google created fbb a new Album ... 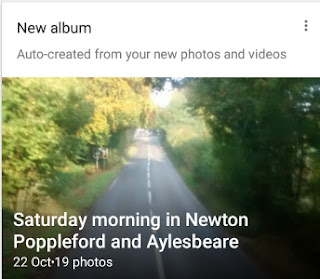