As soon as fbb spotted that the 1420 ran from Axminster to Bridport (only) according to Traveline, but through to Dorchester according to First Bus, the old bloke whipped off an email to the key players.

Both Ken (Traveline Dorset) and Simon Newport (First at Weymouth) were quick to reply; and fbb is assured the error will be corrected this week. It is what engineers would describe as a "right side" failure as no-one would use Traveline and wait for a bus which is not shown. Far worse to advertise and bus as running when it isn't!!

It would be a real case of Kettles and Black Pots for fbb to criticise a genuine mistake; others may wish to explore who was to blame. Suffice it to say there were inconsistencies in the data sent from First to Traveline. A warning note has been added to the Traveline journey planner ... 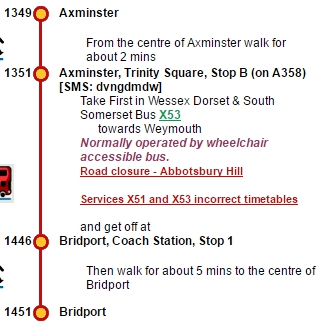 ... and a click on the helpfully red text has a link to First's published timetable.

Services X51 and X53 incorrect timetables
Please note that the timetables for this service currently displayed are incorrect and will be updated later this week. Please go to https://www.firstgroup.com/wessex-dorset-south-somerset/plan-journey/timetables

It would be more helpful if First admitted that these are through journeys, rather than provding "cross-Bridport" passengers with an additional fear-factor. 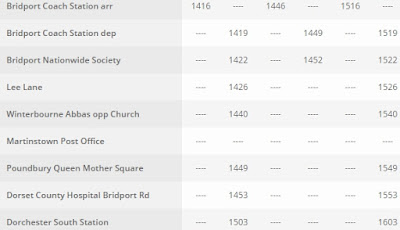 But why are things so complicated? Is this over-complexity the root cause of data problems?

We need a bit of history. When Traveline was being set up, it was decided (by whom we never knew) that you simply could not possibly have one single national database of all buses in the UK. So you needed a method of joining together all the county council, PTE and unitary authority databases to create Traveline regions.

And deary me, how could you cope with cross boundary services which might appear TWICE in the combined data set.

So a gang of white-coat-clad computer-clever people at Southampton University spend months and months perfecting a way of knitting networks together (also unknitting them!) and creating boundary merge points. Much angst was caused by services which had the temerity to cross from one area into another and then back again.

Meanwhile, in a galaxy far, far away ...

... well, the Isle of Wight actually but it might have well been on the Planet Zog, Southern Vectis whad developed a working system delivering timetables and journey planning from one single national database.

As Traveline's over-engineered methodology developed, we were introduced to NaPTAN. This is the ludicrously detailed vat of electronic information used to describe one tiny little bus stop. Here is fbb's local route as it trundles through Seaton.

The columns are headed (left to right)

SMS code (for use in accessing "next bus" infromation)
Stop Name
Street
ATCO code (used for what?) 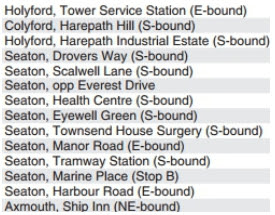 Why cannot a redesigned version of this be the ONLY list? Computers are very stupid (they can only add 0 and 1) but clever programers can create what used to be called "look-up" tables to add in extra information IF (and where) IT IS REALLY NEEDED.

If extra guff is not really needed than all users would be able to cope with a simple stop name. Here is fbb's list for the above stops 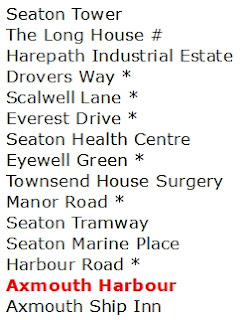 You might consider it worthwhile to add Colyford at # and Seaton at * but only as a SECONDARY name, keeping "Seaton" itself for the town's main stops. The locality "Holyford" was a mystery to fbb and would be likewise to about 99.9% of the local populace.  It does exist ... 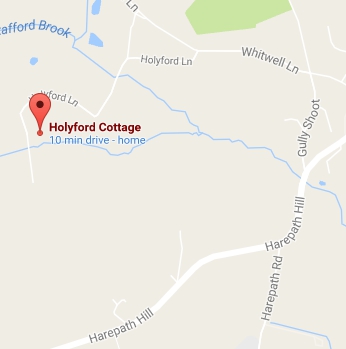 ... down a very narrow lane in the hinterland of Colyford. 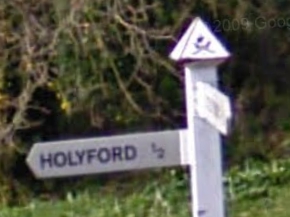 But it is utterly irrelevant to any possible bus enquiry. Some nice posh house, though.

It might be amusing (but pointless!) to hammer on the door and ask them where their local Holyford bus stops were.

fbb has added Axmouth Harbour because it does not appear in Traveline. It is there ... 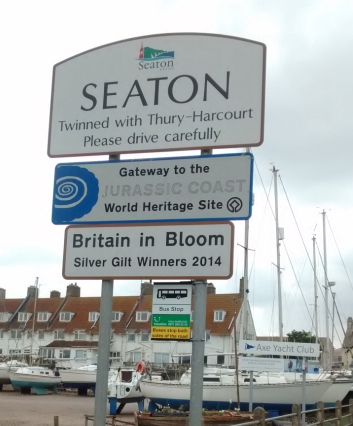 ... just along the road from fbb mansions. It is a Devon County stop (they who maintain Traveline!) and may be there at fbb's suggestion - although his approach was to Stagecoach who had installed all the other flags in the 9A to Lyme Regis.

But if NapTAN is complex (and unnecessarily so), wait until you meet "TransXChange".

TransXChange is the UK nationwide standard for exchanging bus schedules and related data. It is used both for the electronic registration of bus routes (EBSR) with Vehicle and Operator Services Agency (VOSA) and the Traffic Area Networks (TAN), and for the exchange of bus routes with other computer systems, such as journey planners and vehicle real-time tracking systems.

The format is a UK national de facto standard sponsored by the UK Department of Transport. The standard is part of a family of coherent Transport related XML standards that follow GovTalk guidelines.

fbb may be brave enough to write about this tomorrow; or he may need a few days of complete quiet and many bunches of grapes to help him with therapy after his research.

Next technology blog : Friday 21st October
Posted by fatbusbloke at 02:00