It is what fbb calls a "baseball bat" timetable change; i.e. throw all the existing services up in the air, clout the package with a schedulers bat and see what falls to the ground.

Everything that runs along the Thorne Road in Doncaster will change from Sunday/Monday 25th/26h January. 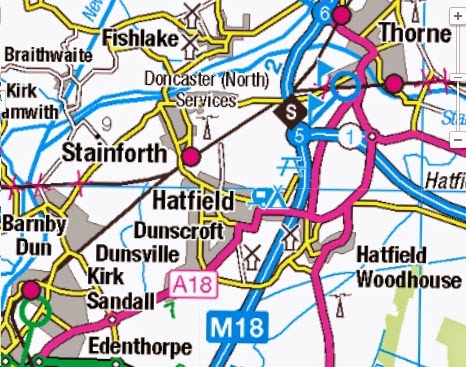 From the change, all the communities along and near the A18 will have different  route numbers (with a few exceptions) and revised timetables.

Doncaster is 212 miles from Seaton (Devon) as the cry flows, but 250 miles by advised road route. The confuser says four and a half hours drive, but fbb reckons nearer five and longer with the occasional PNB. The train journey would be similar. So the old feller has to recourse to on-line information and what he can dredge from his bus-riding Sheffield days 40 years ago.

In pre-PTE days the Thorne Road was a joy and a delight for bus enthusiasts, served as it was by a clutch of independent operators running good quality vehicles on a network in commercial joint operating harmony. 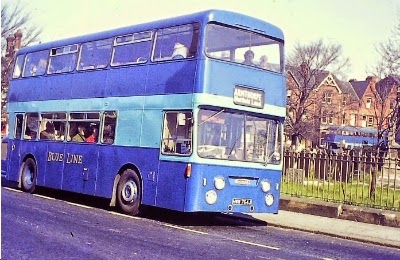 But the People's Republic of South Yorkshire wanted to control everything and slowly, but surely, all these independents succumbed to a good offer and capitulated to the political will of the people (?). Now, the network is in the hands of First Bus. First's web site, like many corporate offerings, lacks any focus on timetable changes. In South Yorkshire we are regaled with headline graphics ...

... and getting us all excited about a timetable improvement from October 2014. Sadly neither the headline, nor the text it links to, tells us which 72! 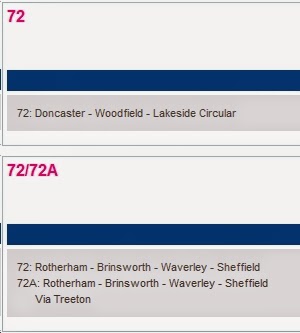 So it is that the occasional user of First's web site has to know that any changes will be cunningly hidden under "Travel News" ... 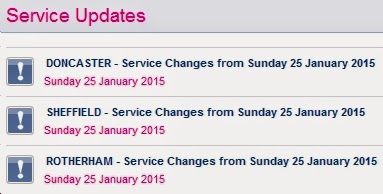 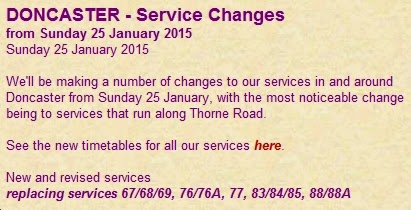 It would have been helpful if First had made the date of the change a little clearer to help us all. The literary skills of their web team are questionable; they might mean "notable" rather than "noticeable", but at least we have now discovered what is changing.

Then there follows a text paragraph covering each bit of the new network. This is OK if you know what to look for, but hardly user-friendly. Occasionally it is open to misinterpretation as we shall see as this series continues.

Clicking on "here" ought to take you to the new timetables. In an outbreak of web programing laziness, you link to a full set of South Yorkshire "forthcoming" timetables; 89 services spread over 10 pages where you will, with effort, find the occasional new ones. Of course you could look up a specific new service number, e.g. X8 ... 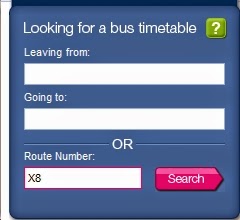 ... but the results are discouraging. 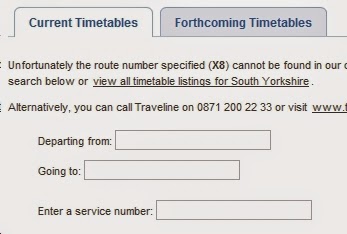 And a grovelling apology from fbb, there is a slightly quicker link to this text from the home page.

Surely a major change such as this warrants a bigger and bolder notice in amongst all the clutter. Certainly a link from the text to each individual new timetable should be essential.

First do have one redeeming feature. In small print, at the bottom of the lengthy textual description of the changes, is a link to the Thorne Road map. It is EXCELLENT in every way. 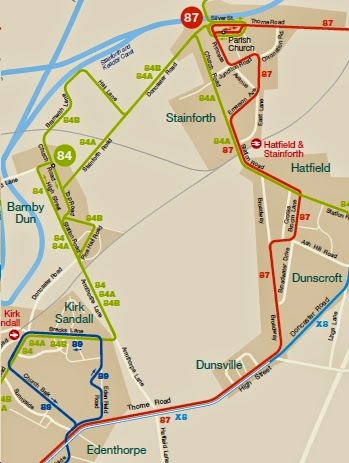 And it appears to be accurate. Bonus!

Of course, what is needed for a change like this is a booklet with timetables for all the new services, colour coded, plus the network map, plus stop maps where things look complicated (Barnby Dun, Stainforth, Thorne). Maybe the First team in South Yorkshire could learn a thing or two from the Cornwall or Somerset gangs.

But for timetable leaflets we have to go to Travel South Yorkshire, the PTE's information service.

A number of residents living in the School Lane area reported that a slice of margherita  pizza landed on their doormat on Saturday evening.
Tara Reilly, one of the residents who was targeted, said she had reported it to police as she was concerned it may have been an attempt to poison her Labrador dog.
Commenting on Facebook, Ranjan Bhayani said: "The person must be stopped. Keep a look out for anyone acting suspiciously with a slice of pizza."
However, another Wootton resident, who does not have a dog, said she had also had a piece of pizza posted through her letterbox.

Alan comments: Now there's a phrase you don't hear every day "Keep a look out for anyone behaving suspiciously with a slice of pizza". Not since the days of the dreaded batter pudding hurler of Bexhill on Sea, I suggest.

fbb concludes: Should you wish to emulate Neddy Seagoon (1954 radio show) and seek out the perpetrator, buses 7 or X4 will take you from Northampton to Grange Park.