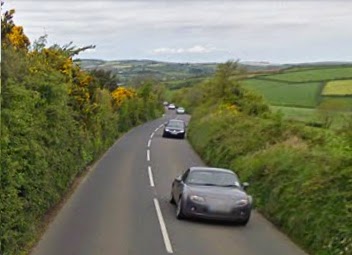 Having parted from the periphery of par and the properties of picturesque Polmear (?) there is nothing much for Western Greyhound's service 525 to aim at, commercially speaking, until the outskirts of Fowey. fbb's bus remained empty to the terminus.

A highlight of the journey, however, is the Polvillion Road/Lankelly Lane bus stop. 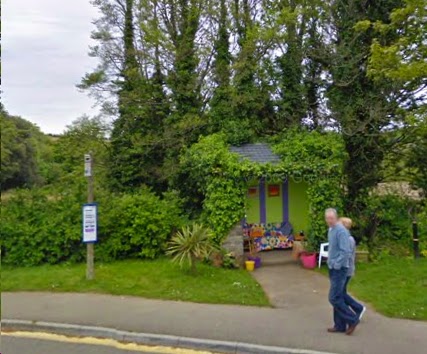 The shelter is cared for by a local resident and appears in various decorative guises. fbb passed at too great a speed to get a snap of its Christmas mainfestation so the above Streetview view will have to do, plus a selection of past costumes. 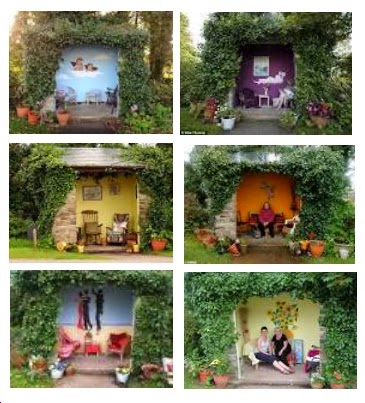 Local resident Jane Tinsley said: "It was scruffy and horrible and the seat was broken and it is one of the first things people see when they arrive here. All the bits of furniture and paintings have been donated by lots of different people who all wanted to see the bus stop improved. We had plastic chairs at first but now they have been replaced by better quality wooden ones that people no longer needed in their homes."

She even made a curtain for the window and added a rocking chair, waste-paper basket and a selection of neatly pruned pot-plants. Cafe owner Jane was given permission to spruce up the small stone shelter by the town council after it suffered years of vandalism. Councillor Sally Bain said: "She's made it so attractive. In the early stages there was some vandalism but now it seems to survive. "I think it's rather lovely and it's very popular in Fowey."

Buy, back to business. The Fowey terminus is at the Safe Harbour pub which isn't at the Harbour. 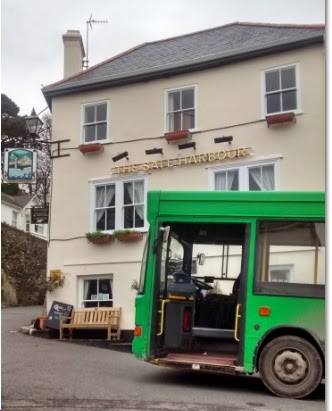 With a happy snook cocked to Health and Safety nonsense, the bus reverses into a narrow side road and sits there awaiting its passengers. The WG stop ... 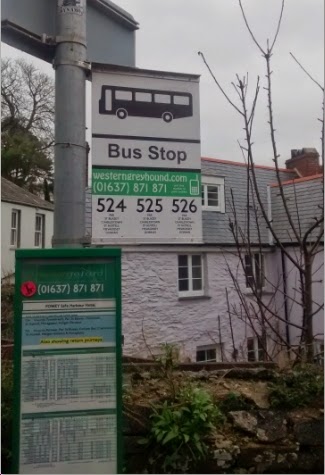 ... has the expected full timetable; none of this departure list nonsense here. Hopefully nobody will wait for route 526 as that has long gone. 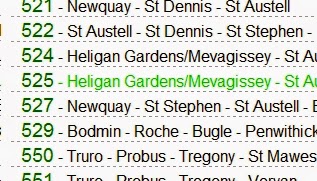 Waiting passengers have a substantial shelter ... 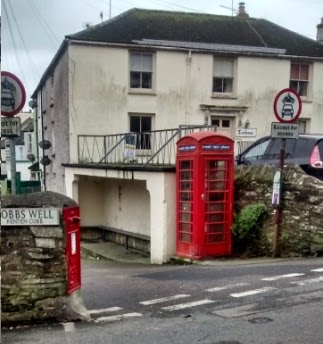 ... and a view down the steep hill to church and harbour. 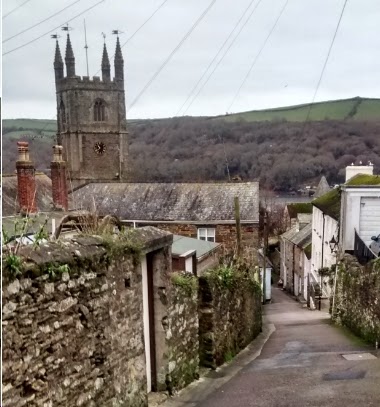 Faced with lack of pole space, First have simply hijacked the "no stunt riders" road sign and thereupon applied their timetable frame. 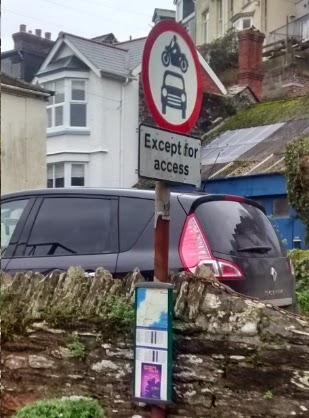 fbb does wonder whether the highway authority people will mind! But a good house point for initiative.

fbb's 525 turned into a 524 at Fowey and left promptly but empty at 1040. First's 24 was due in at 1056 and out at 1100 leaving your chubby blogger inadequate time to explore further. Creaky limbs, some modest corpulence (?), steep hills and the consequences of an early start meant that "nipping" was not an acceptable agenda item.

Malcolm is a First Bus inspector and declined fbb's offer of a starring photographic role in this blog. He had been dispatched from central control at Camborne to "keep an eye on things" and distribute timetable booklets. Two real genuine passengers turned up for the 1110 525 and Malcolm promptly advised the earlier service 24 departure. 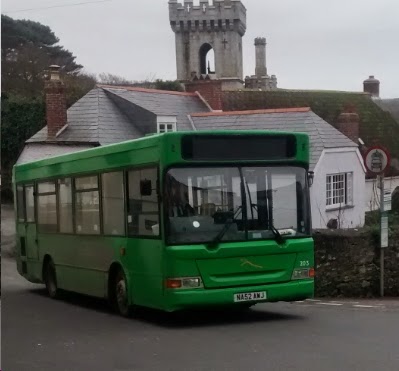 The bus, by the way, once served the residents of Washington (Tyne and Wear) as operated by GoAhead. 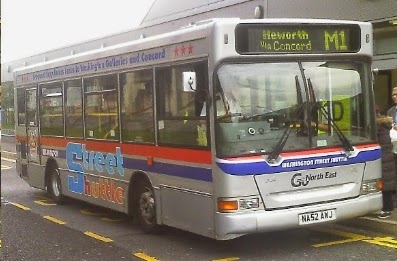 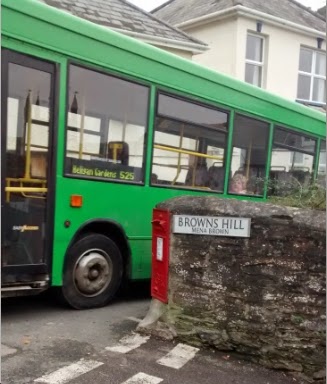 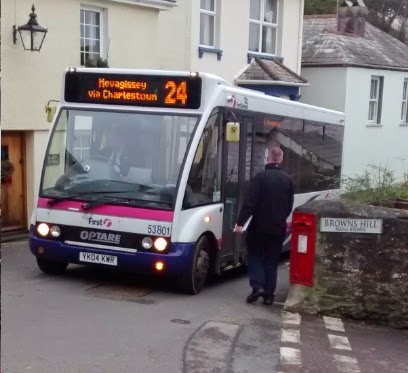 An embarrassed Malcolm rushed to investigate. The tale was revealed later in the day when fbb was chatting to another First employee. Apparently 53801's ticket machine did not function. Was the delay necessary? Back in the good old days of Setright, TIM, Ultimate, Bellgraphic and Willebrew, conductors were often issued with a pad of emergency tickets; a simple solution no longer allowed in this technology-driven world.

In their absence, could not the offending machine have been removed and attended to, leaving the bus to run on time but with free rides? The less of revenue would be insignificant but reliability and, most importantly good PR on the first day of the new service, would be maintained.

For obvious reasons, fbb was, once again, the only passenger until three fifths of a handful joined in the more built-up areas of St Blazey. Watching buses of both operators as they travelled in the opposite direction (here is WG turning into Biscovey Road) ... 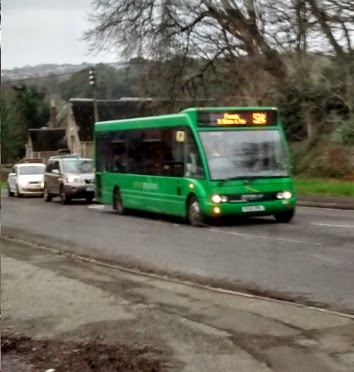 ... it was clear that both were carrying mostly fresh air. There is simply not enough business to sustain four buses an hour.

The barbie Optare was originally based further east and is seen here "branded" for the Lyme Regis town service once  operated by First Hampshire and Dorset. 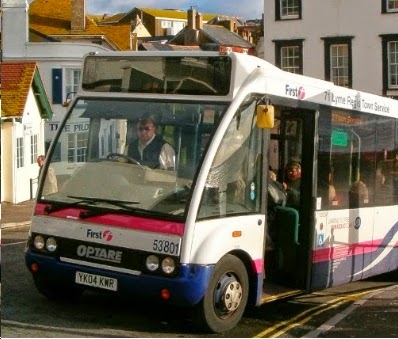 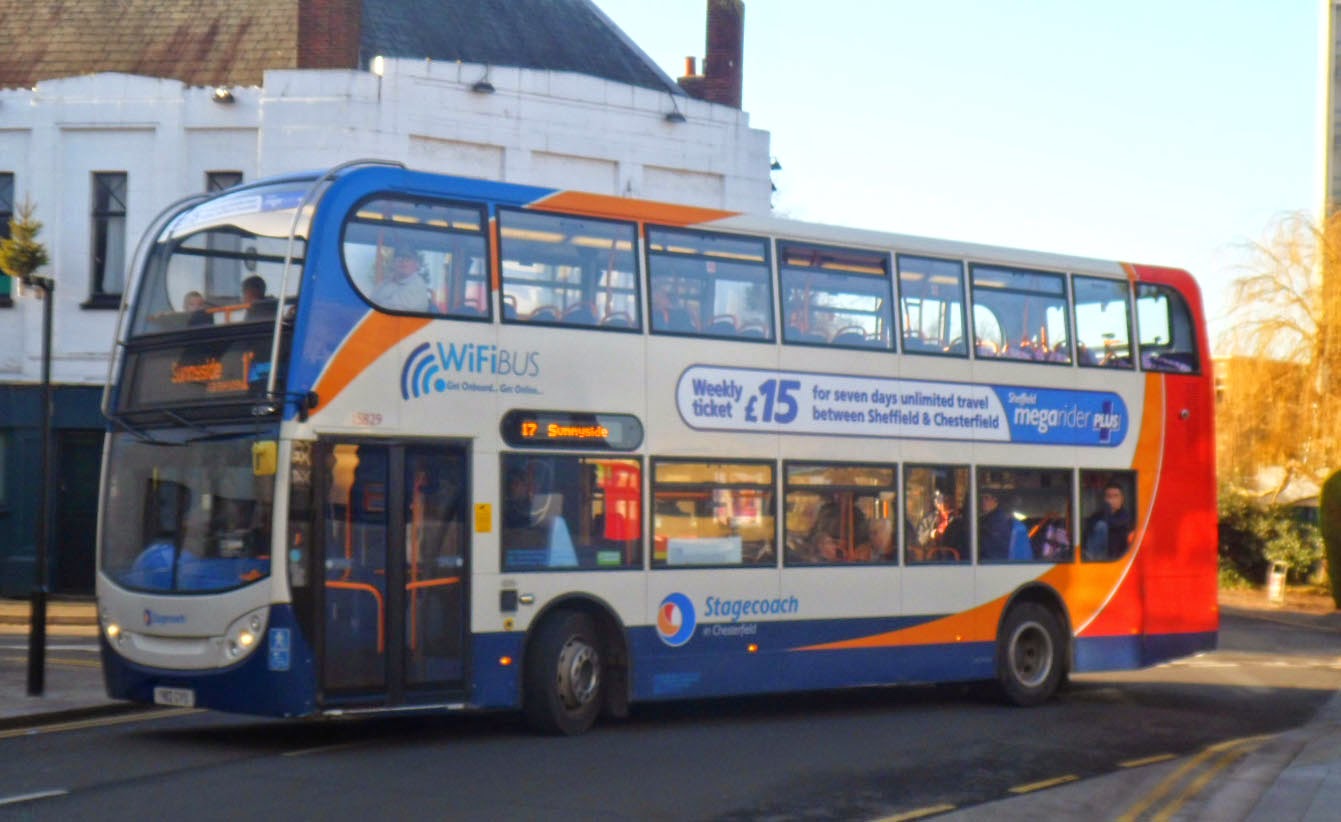 ... as seen on a Service 17 travelling north to Obelisk Rise, shown as Sunnyside on the screen. It's that weekly ticket offer emblazoned on the side.