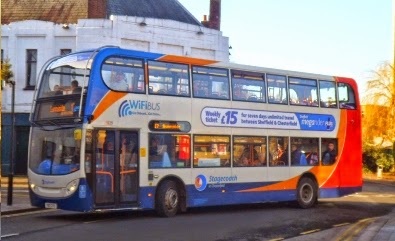 A few days ago, fbb published this picture of Stagecoach in Sheffield trundling off to Sunnyside in Northampton. Meanwhile ... 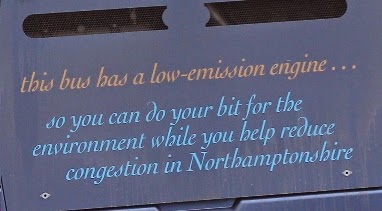 ... a Gold double decker extols the virtues of bus travel in Northamptonshire ... 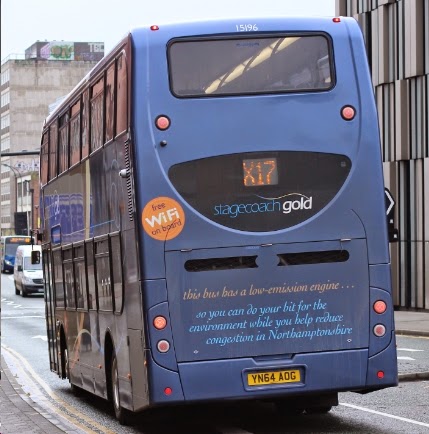 Alan, our Northampton correspondent writes:-
You wait ages for an MP and then three turn up at once. (Brian Binley, Michael "Potholes" Ellis and Minister McLoughlin) (Un)fortunately from my viewpoint the Boy Mackintosh (Borough Council Leader) ...

... was obscured by the minister. County Council leader and Mr Pastry lookalike Jim Harker was there too.

This gang of smartly dressed trainspotters are arranged (arraigned?) beside a totally fake station sign labelled "Northampton". This assemblage of political celebrity was in the process of declaring the new station open. Unlike most of the trains which do, generally, run on time, the station was running a mere three months late. This is due, we are told, to "snagging"; mighty monstrous snags if they took three months to resolve.

And off inside they all went to enjoy a coffee and a Danish at the new Starbucks. Of course not, the station's not finished even yet!

Work will now start on bringing Starbucks, WH Smith and Cafe Republic into the building.

And talking of fake station signs, it was good to read Councillor Mackintosh's tweet just after (so he tweeted) the Minster had done his stuff.

That's over eight hours before the event.

The prestigious (?) event was originally scheduled  for 0930 but brought forward to 0830, so by the time our correspondent had arrived the ceremonial unveiling had happened. 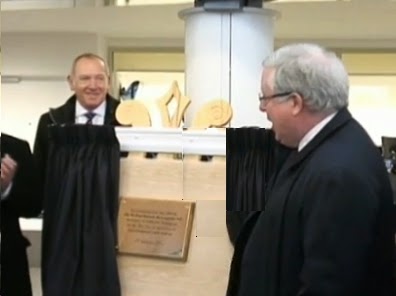 The plaque is screwed to an innocuous chunk of plywood, rather than the structure of the station. Had someone forgotten to get it ready; or was there nowhere strong enough to safely screw the slab?

Alan continues on the vexed subject of main entrances and step free access.
Having walked, egressed from bus, parked your clone Borisbike or (if you are John Wayne) tied your horse to one of those posts; and if you cannot face the 39 16 steps ... 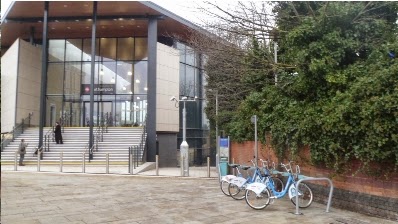 ... proceed sort of northwards down the signpost-less descending ramp ... 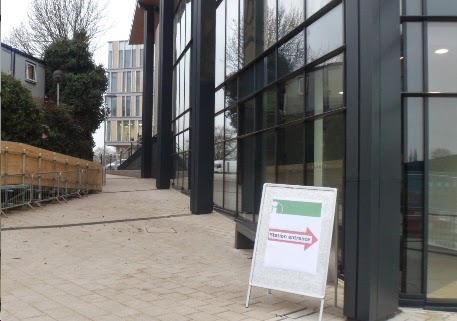 ... and you will eventually find a placard reminding you (a) that the station designers were not responsible for showing you how to get into the building and (b) that nobody else had thought of it either. 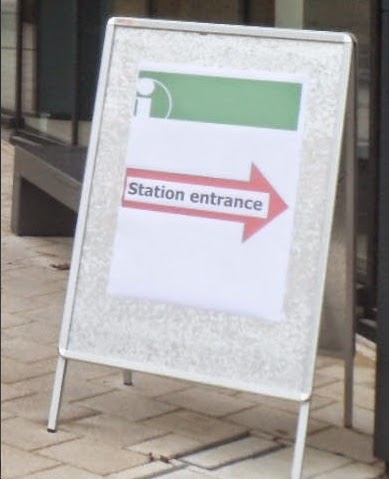 This will take you in through what most people would describe as the rear entrance, being, as it is, on the opposite side of the building from the front. But Notwork Rail calls it the "main" entrance. From here you can choose a lift, if it's working, to take you back upstairs to where you need to be to buy a ticket or eat an overpriced bun. 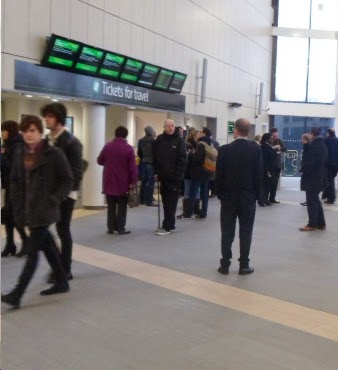 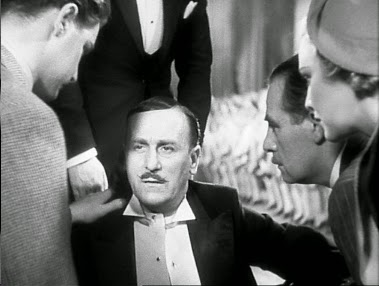 Am I right sir?

To complement the new station, the station facilities poster (on-line) is all ready for the new building? 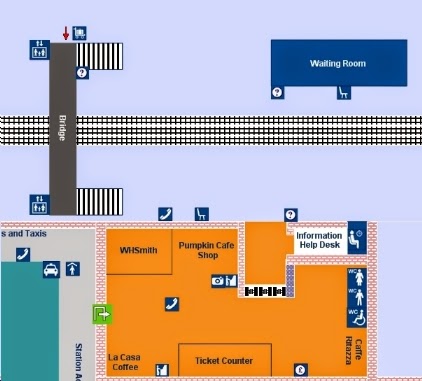 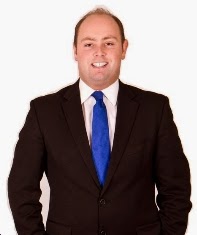 This hero of the political world is known to this blog as the one who has propounded significant levels of untruth and misdirection about Northampton's new bus station. In response to the certain fact that the North Gate facility would be too small, the sequence of soundbites went like this.

And, of course there were similar statements about demolishing the old us station, including:-

This has been organised so there will be no road closures.

A Northampton town centre road will be closed for three days for the next phase of work to prepare to demolish Greyfriars bus station. Lady’s Lane will be closed to traffic at 7pm on Friday January 16 until 6am on Monday January 19.

Well now; the much admired councillor has won a prestigious international award.

A council leader named Philistine of the Year by Private Eye over the sale of an Egyptian statue has laughed off the dubious honour. 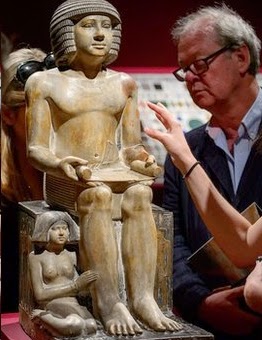 The statue of Sekhemka sold for £15.76m to help fund a £14m extension to Northampton Museum and Art Gallery. The museum was removed from Arts Council England's accreditation scheme after it ruled the sale breached the accredited standards for how museums manage their collections.

The award is called "The Philistine" award - which seems a bit unkind to the Philistines, much vilified in the Bible but, nevertheless, a highly successful maritime race. David M; successful? Hmmm!

The Northampton Sekhemka statue is an Ancient Egyptian statue that was given by the Marquess of Northampton to Northampton Museum around 1870. It dates from 5th dynasty and shows Sekhemka the scribe with his wife, Sitmerit.

Of course you all knew that, didn't you?

Next bus blog : Wednesday 14th January
Posted by fatbusbloke at 02:00