Bus companies don't make it easy for outsiders to follow where the buses actually go. Thankfully, most passengers have obtained advice from someone at their destination before travelling. Above is the best that Western Greyhound can offer; there are services 524 and 525 but which way each goes is a complete mystery.

The Cornwall County map used to be available as a PDF but this appears to have vanished. The current on-line version is scrollable to a point, but what actually happens is that you leap from one tile to the next. fbb has glued two bits together ... 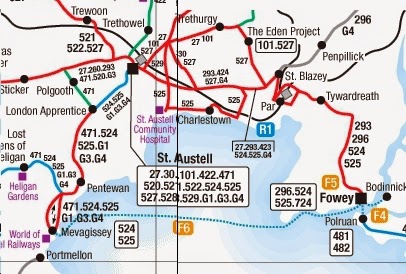 ... revealing a disappeared 524 between Snozzle and St Blazey and a wrong 525 between St Blazey and Fowey. Here, you might be forgiven for thinking that there is no difference between the two routes. In fact the service to Mevagissey follows the same route, irrespective of its being  524 or 525.

The only difference is the order in which the buses serve Mevagissey and Heligan Gardens.

The gardens were created by members of the Cornish Tremayne family from the mid-18th century up to the beginning of the 20th century and still form part of the family's Heligan estate. The gardens were neglected after the First World War and restored only in the 1990s, hence "Lost"! 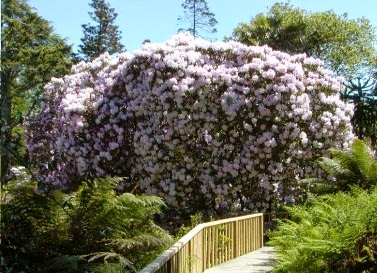 The gardens include aged and colossal rhododendrons and camellias, a series of lakes fed by a ram pump over a hundred years old, highly productive flower and vegetable gardens, an Italian garden, and a wild area filled with sub-tropical tree ferns called "The Jungle". The gardens also have Europe's only remaining pineapple pit, warmed by rotting manure, and two figures made from rocks and plants known as the Mud Maid ... 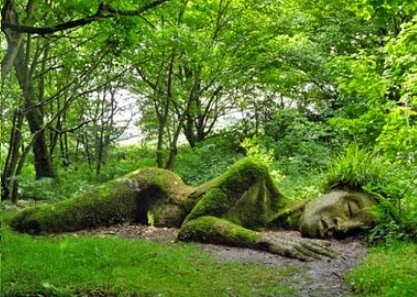 ... and the Giant's Head.
So, effectively, Western Greyhound [WG] runs a bus every 30 minutes Monday to Saturday between Snozzle and Mevagissey.

And along comes First Bus to compete with WG. The big group's motives have never been clearly stated and First's plea that customers have "begged" for a service is likely to have been a PR "spin". WG have had huge problems over the last couple of years concluding in the recent take-over; so is First's policy to give WG a shove into oblivion?

The massacre of Mevagissey is an unlikely outcome of competition with the 524 and 525 south-west from St Austell. From today, First's 24 runs only hourly and ignores the tourist destination of Heligan Gardens.

You would imagine, on frequency alone, Western Greyhound would win this particular battle ... 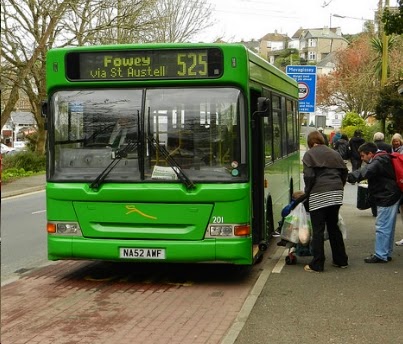 ... with a reminder, of course, that First, as successors to Western National, were once top dog there and then, effectively, gave up! 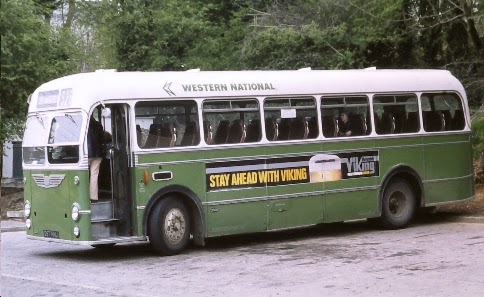 Today, all being well, fbb will be in Mevagissey and Fowey for the very first time in his illustrious life.

Below is fbb's Mark 2 schedule for today, allowing at little more time for exploration and enjoying a couple of extra rides c/o Western Greyhound. Contrast and compare! 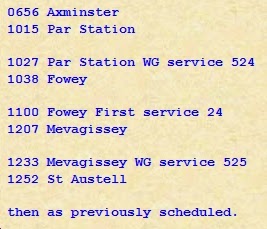 The Western end of the competing routes seem reasonably simple, but not so to the east. Fowey is fraught with frustrations. Tomorrow all (well, nearly all) will be revealed!

** Shemozzle : (probably originally derived from Yiddish) "A state of chaos and confusion; a muddle."

Anyway, the good folk of Taunton depot have leapt into action and replaced the graphic ...

... with another error. The service runs on Mondays to Fridays ONLY! 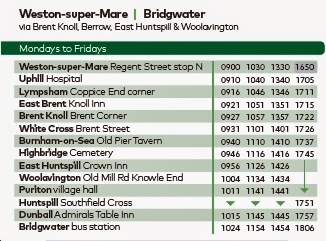 To add to the confusion, this note appears on the First Bus in Bristol, Bath and the West but not as far west as Somerset web site.

One route (Service 121) is being withdrawn, a new Service 21 and an enhanced Service A2 are being created. The latter provides a number of new public transport links across North Somerset. 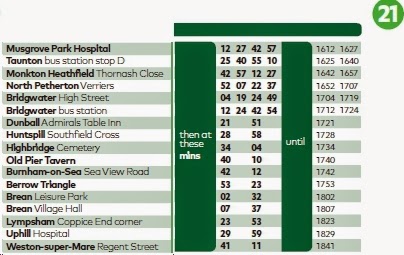 And then there's 21 Newbridge Park and Ride. That is, of course, Newbridge in Bath; clear as mud from the timetable. 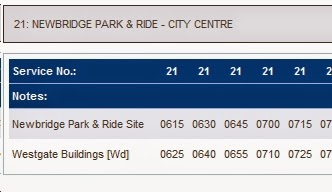 The above quote (in green) might just imply a third service 21 in North Somerset. You're confused? fbb is confused!!!

Of course, silly fbb, Buses of Somerset is absolutely nothing to do with First Bus as we all know (ha ha) ...