You could have gone by train!


Back in the dim and distant past you could have travelled by Great Western Railway via the junction at Bodmin Road arriving at the splendid Bodmin General Station. 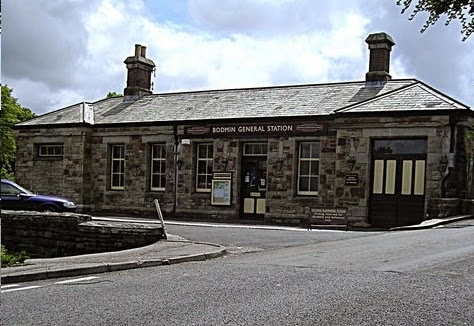 Or, if you so wished, you could travel by London and South Western Railway via the North Cornwall line to Wadebridge and then dog-leg back to Bodmin North. 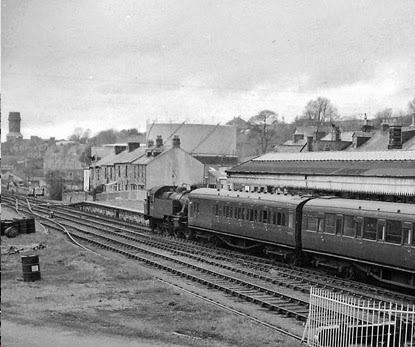 All trace of Bodmin North has been expunged by the obligatory industrial estate, but Streetview does reveal the terrace of cottages at the end of the platform. 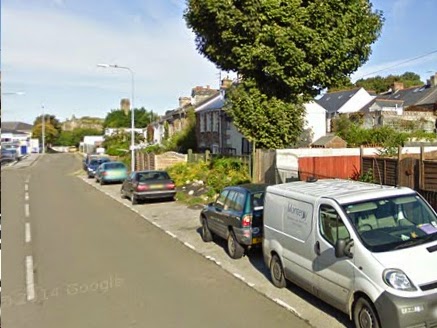 A study of the complex history of these lines is beyond the scope of a short blog but, suffice it to say, unless you enjoy the pricey pleasures of the steam line, delightful though it be, you route today would be by car or bus. But before the pedants comment we need to record that the LSWR and GWR stations were both simply named Bodmin until quite late in their corporate lives, namely after nationalisation.

The preserved line is named "The Bodmin and Wenford Railway" which is odd because no part of the preserved line serves Wenford! Take a look at this map, a click on it will pull up an enlarged version. 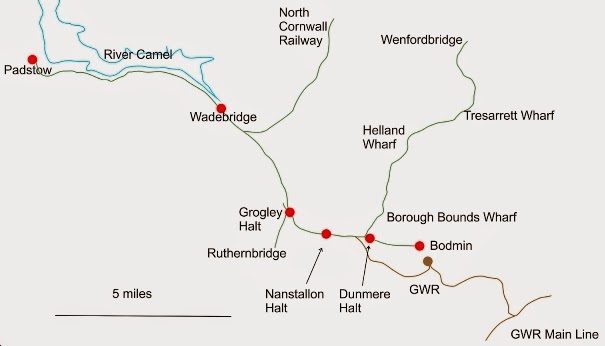 Wenfordbridge is a small community at the end of a freight only branch, built by the predecessors of the LSWR to carry mainly china clay. 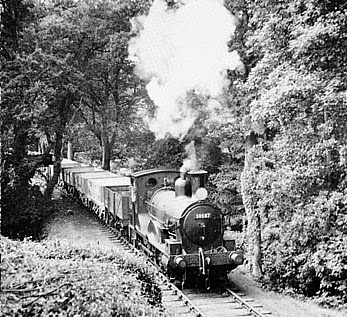 The various passenger services were withdrawn in 1966 and 1967.

fbb is back in St Austell after his meanders to Fowey and Mevagissey. First's third incursion into Western Greyhound [WG] territory is to offer a challenge on their service to Bodmin. WG's route is the 529 ... 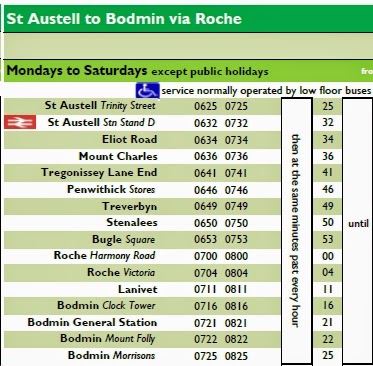 ... operating hourly Monday to Saturday and two hourly on Sundays. First runs to Bodmin as an extension of the existing service 27 between Truro and St Austell. But the routes are not the same.

The 529 wiggles via Mouth Charles on its way out of St Austell ... 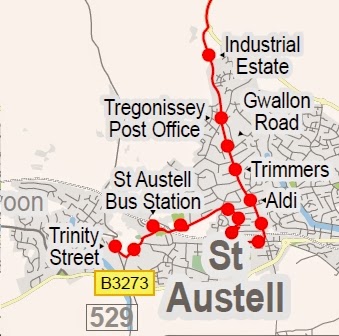 ... whereas the 27 runs straight to Aldi before turning left.

After Pennwithick, however, the routes differ significantly. The 529 turns west via Stennalees and then north to Bugle ("The Square" on the map below) ... 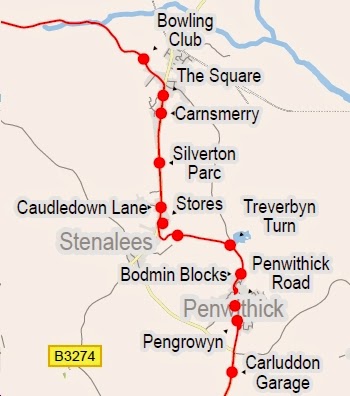 ... before running westwards again to Roche. First, on the other hand, continues north from Penwithick to Bugle, turns south to Stenalees ... 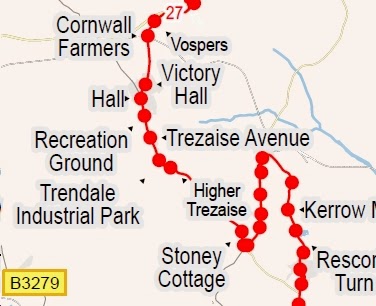 ... the north again via the B3274 to Bugle ("Hall" or "Victory Hall"). From here both services are identical; via Victoria to "Cornwall Services". 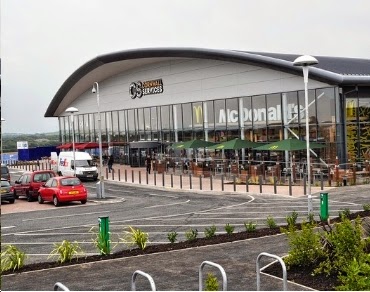 This huge edifice provides motorway-style services for the A30, including some very attractive local food ... 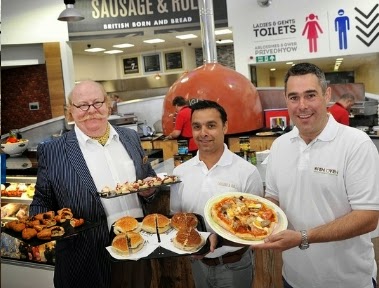 ... in addition to the likes of MacD and CostaLot. Yummy. fbb's 27, a 27 in the opposite direction and an unidentified 529 did a tour of the car park collecting and delivering parcels of fresh air. From here the routes proceed direct via Lanivet to Bodmin. Both First's map ... 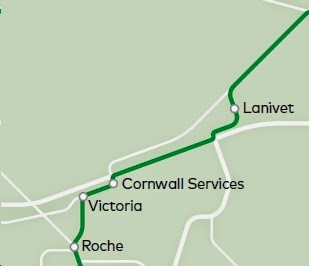 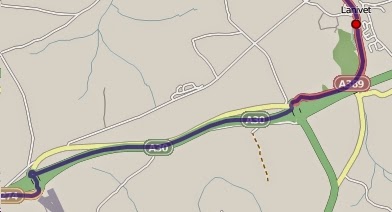 ... imply that the buses use the fast dual carriageway A30. fbb's didn't. His 27 ran via the old A30 which runs parallel to the new road at this point. 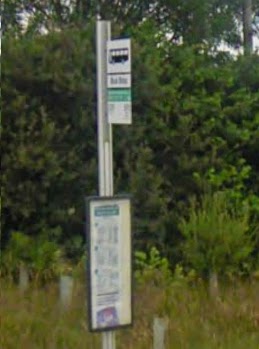 ... with frame and a timetables. fbb, seated top deck nearside, could not see whether it had been updated by First's man-with-pastepot; the picture is from Streeview.

After a brief wiggle which takes the buses past General Station the main town centre stop at Mount Folly is reached. 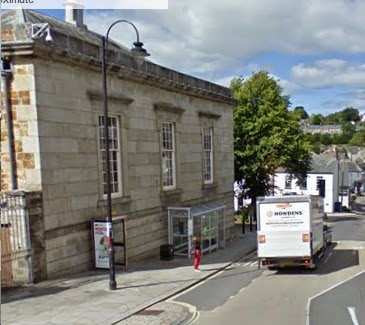 For fbb the bus took him a little further to Morrisons store and time for a late lunch.

The service 27 carried a respectable clutch of passengers upon departure from St Austell station, most of whom had alighted before Greater St Austell gave way to North Cornwall's former mining areas. Passenger numbers were minimal for the rest of the journey. Encourgingly there was plenty of staff help back at St Austell bus station ... 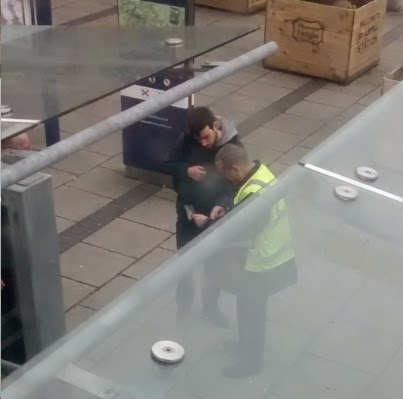 ... and timetable booklets were available at the little tourist stall in the station. 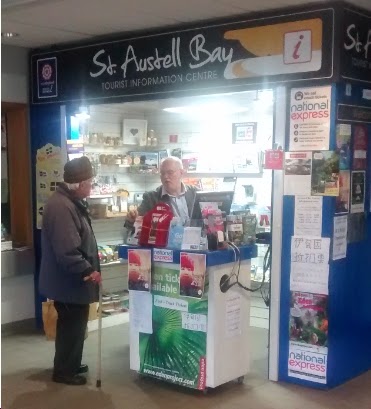 There were plenty of posters around ... 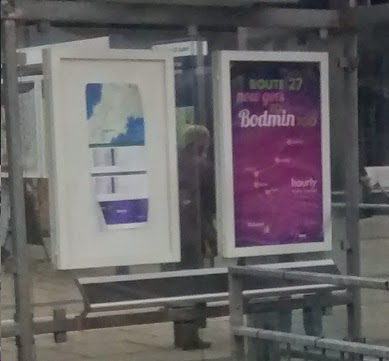 ... and most enquirers knew that something had happened. By today's often weak standards, the publicity was good - even on the first day. 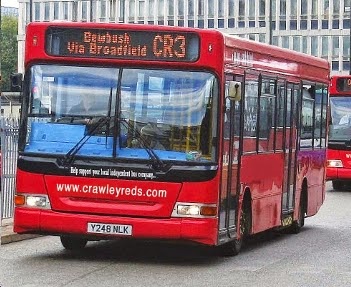 On 28th November, as part of a series on various Red Arrows, fbb reported on a competitive incursion into Crawley by a branch of Sussex Bus (read again).

fbb was uneasy about the future:-

Now comes news that the Crawley operation will end on 15th February. The core Sussex Bus "network" appears in good health and fbb's informant reports that new services have been registered to start in March in the Haywards Heath area; mainly, he says, once-a-week services to supermarkets and shopping centres.

Next bus blog : Friday 16th January
Posted by fatbusbloke at 02:00