Commuters Hit Hard Once Again!
Elvis is running a chip shop in Scunthorpe 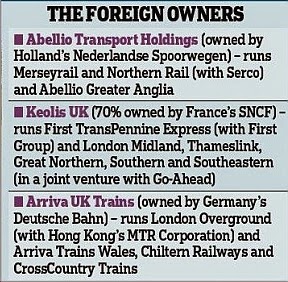 It wouldn't be the new year without a rail fares shock story. The annual increase in regulated fares (those controlled by government policy) was announced in the middle of last year, so not much of a shock. And in an up-coming election year our nice kind government then announced a lesser increase. And that was such a surprise. We must all vote for Mr Cleggeron (?).

And it wouldn't be the Daily Mail without miseleading and over-hyped information, in this case in an article published on 31st December, a "slack news day". In the graphic above the hack has listed the constituent parts of the one Thameslink-Plus mega-franchise as four separate deals. Well it makes it all the more shocking. And the recent Scotrail award is not on the list.

And that, apparently, is what we voted for when Mrs T was in charge. And that was what Tony promised to change back - and didn't.

Needless to say that, too, is full of misdirection. The Union man says "higher fares would be bearable if we were seeing investment but we are not." Oh yes we are. Oh no we're not. Oh yes we are. He's behind you!

And, screams The Mail, these huge profits (Oh yeah?) are going to subsidise commuters back home; look how much cheaper their fares are in France/Germany/Netherlands. 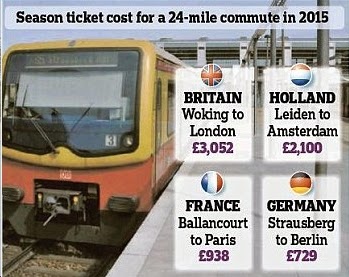 Which, indeed, they are. But this raw figure ignores the level of state subsidy. SouthWest Trains are paying a premium to the government, so no up-front subsidy for Woking to London. Unfortunately, the finances of trains in Europe suffer from even more obfuscation than in the UK, but it is likely (but unproveable) that commuters in France and Germany are paying less than 25% of the cost of their travel in up-front fares.

Woking's "crippling" price equates to about £12 day return for a typical working year. The cheapest off-peak day return for a non-commuter is £13.20. At peak this increases to £20.50. So the cruelly-treated commuter, travelling at peak times, is paying the cheapest fare possible and saving at least £8 a day. Weekend and holiday trips to the Big Smoke then come free, as do any local trips en route. 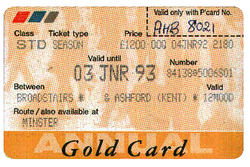 Then there are the additional "Gold Card" discounts for the hard-done-by commuter crippled by an annual season ticket.

1/3 off Standard and First Class Anytime and Off-Peak fares
for yourself and up to 3 adults travelling with you
60% off child fares for up to 4 children (£1 minimum fare)
A one year Railcard for £10 for you or a friend
choose from a 16-25, Family & Friends, Senior,
Two Together, Disabled Persons or Network Railcard.
1/3 off Off-Peak pay as you go fares and
Off-Peak daily price cap for you, as the cardholder,
when you get your Annual Gold Card discount
set on your Oyster card
1/3 off Off-Peak Day Travelcard Zones 1-6
1/3 off Anytime Day Travelcards
1/3 off adult PLUSBUS Day tickets in the Network Railcard Area
Discounts on journeys to the Isle of Wight
using Wightlink, Red Funnel or HoverTravel

Note that the discounted travel applies within the Gold Card area, but see below.

It is no wonder that some canny passengers buy the cheapest annual season (Ryde Esplanade to Ryde St Johns Road at £168?) to get all the benefits. Gold Cards used to be only available for commuters in the former Network SouthEast area, but in 2015 this is extended to include places like Stafford and Worcester. A map is available (here)

There is much to be said for being a down-trodden annual commuter!

But it's no wonder that our politicians get very very confused. 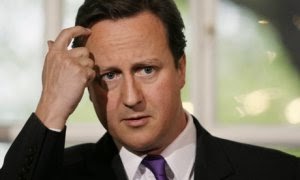