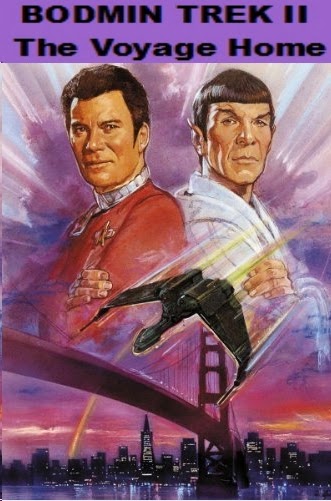 fbb's service 27 from Snozzle arrived, on time, at Bodmin Morrisons at 1421. 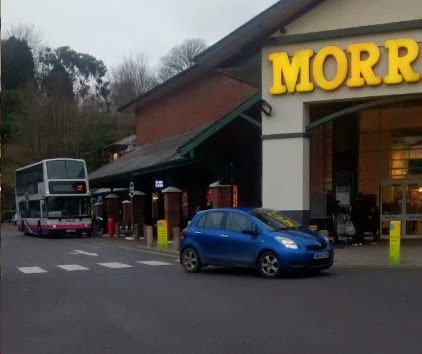 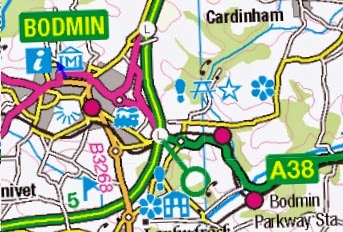 ... leaves from Priory Road (for Morrisons) at 1418. Even fbb, in his wildest dreams, would not schedule a minus three minute connection. Anyway, it was well past lunch time and sustenance was badly needed. Morrisons caff is always good value for money and a healthy chicken pie, chips and peas (plus cuppa) was just what the dietitian didn't order! 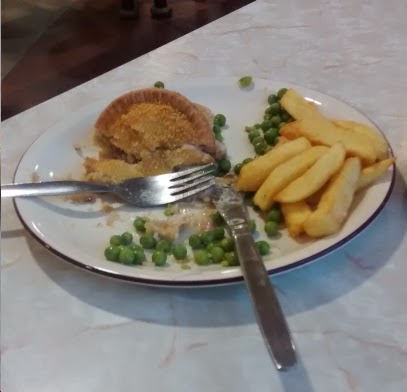 A good nosh for less than an unwell cephalopod.

Next, find the Priory road stop. Ah, there it is at the corner of the car park. Easy peasy! 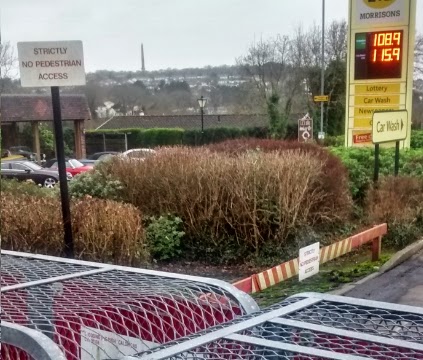 Not easy peasy; the suitable and ideal gap in the curtilage right next to the stop is banned to pedestrians with armed guards turning away any poor soul who might try to vault the electrified barrier. fbb was afeard of the watchtowers so decided to take the easy, safe (safe? You must be joking!) route ... 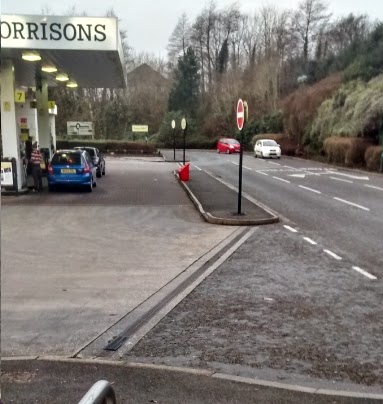 ... across entry and exit for the petrol station and ... 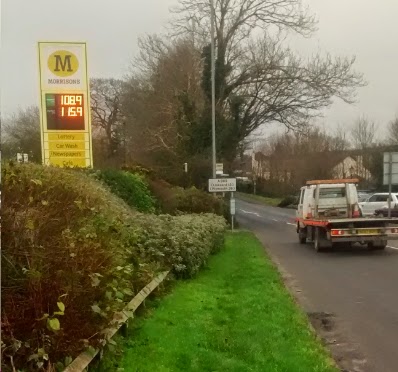 ... along a slippery slidey muddy grass verge. And, yes, fbb did very nearly tumble his wilkies!**

WG's 555 arrived on time at 1518 and conveyed fbb at breakneck speed via the A38 and up the approach to Parkway Station. fbb was the only alightee but five boarded, encumbered with bulky luggage, leaving your concerned blogger to wonder how the bus might cope with Summer loadings. 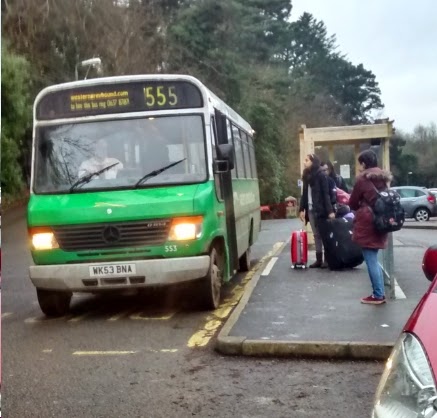 WK53 BNA was, fbb thinks, new to WG and is one of their many step-entrance midibuses which will be banned from 2016. The new management has a bit of a financial problem with the funding of this enforced change.

Bodmin Parkway station (formerly Bodmin Road) has been rebuilt in adequate but minimalistic style. The waiting cupboards are warm and clean and the old signalbox ... 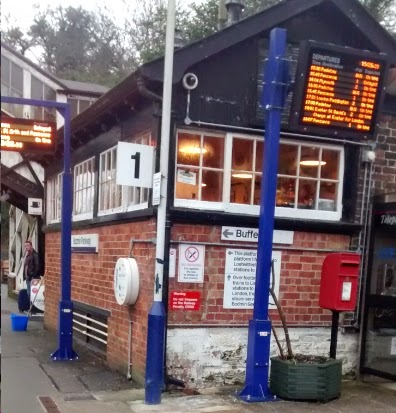 ... is now a splendid caff. fbb was tempted, but, barely half an hour after completing the pie input project, fbb resisted! So over to platform 2 to await his luxurious 2-car sprinter for Plymouth, where a five minute change (tight?) onto an HST would speed him in the lap of luxury back to Exeter for Axminster.

Then it happened. "Would passengers please note; the 1545 to Penzance is running 100 minutes late." Followed in ten minutes by, "The 1545 to Penzance has been cancelled." A quick glance at the departure list revealed that the 1720(ish?) from Penzance was now cancelled, obviously the return working of the 1545.

Needless to say, fbb's connecting train from Plymouth was also cancelled. But, there was yet hope. It was now 1700 and the 1430 Crosscountry arrival was just arriving a tad on the late side (!!). This would be the re-scheduled next departure eastwards with "connections at Exeter". 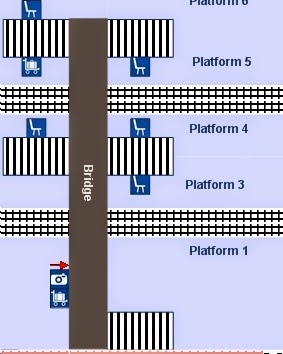 It was due into platform 5 at Exeter at 1823 with the Axminster train leaving from platform 1 at 1825. We may be "all part of a national rail network" but it looked a no-hoper. fbb sought out a harassed First man with squeaky radio.

fbb suggested he might speak to his supervisor and suggest that his supervisor spoke to his opposite number in Exeter who could contact the S**thw*st Tr**ns supervisor, who would speak to the Fat Contoller at Salisbury; who might ask Tim ... 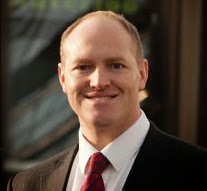 ... very nicely, to put his shovel down and ask Bert to hold the 1825 for connections. And the Crosscountry train lost time and would be about 3 down on arrival at Exeter.

But he did and they did. Hooray.

The 1825 left 5 minutes late, but by the time it had reached Pinhoe on the outskirts of Exeter it was on schedule. Three sheers for recovery time!

The problem was a broken rail in Whiteball Tunnel between Taunton and Tiverton ... 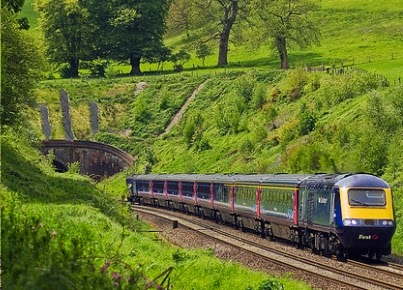 ... fixed remarkably quickly, all things considered; but which effectively severed the main line for over two hours - not ideal for reliability!

The current competitive situation between First and WG is clearly not sustainable; they will both be losing money. First are running these services at the lowest cost possible using clapped-out older vehicles, but then much of WG's fleet is now long in the gear tooth.

The outcome is unpredictable, but fbb expects major change again before the end of 2015! Maybe sooner? First have announced another batch of new services for February.

We must end with a touch of levity. As usual, fbb had a necessitous PNB whilst at Morrisons. (Prince Philip, "Never pass a bathroom!") He was intrigued, nay mystified by a notice over the sinks. 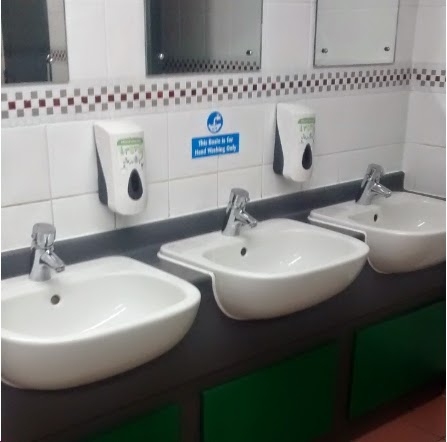 Here is what it said. 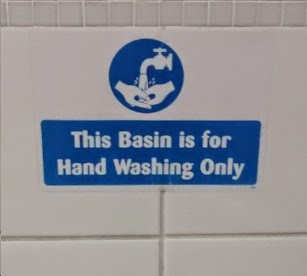 If the centre basin was for hand washing only, what might you use the outer two for? Cooking a Sunday joint; mixing paint, washing your smalls or something much less savoury. The mind boggles.

And just in case First get a bit big-headed with fbb's positive blogging, there are a few niggles with the nitty-gritty. But we will save those for next week. 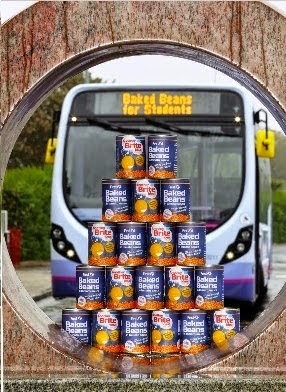 Well, the lads in Aberdeen had a few left over. 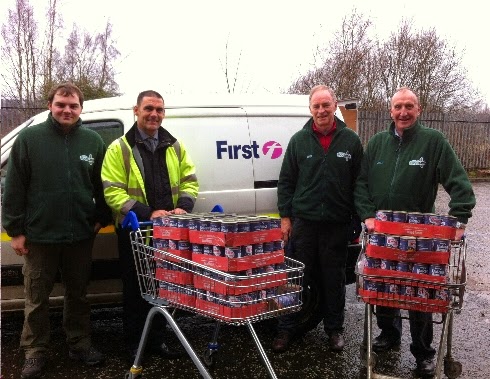 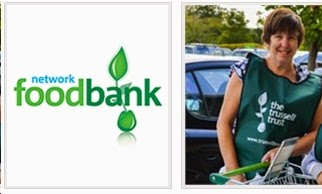 The Falkirk foodbank was appealing for food donations to feed local people in crisis, from pasta to puddings or most other forms of in-date non-perishable food. To support the foodbank at one of its busiest times First Bluebird supplied them with 300 tins of beans, which were unused following a recent promotional giveaway for new student intakes at freshers' fayres.